What we learned from Amber Frey's book and mega-media blitz. 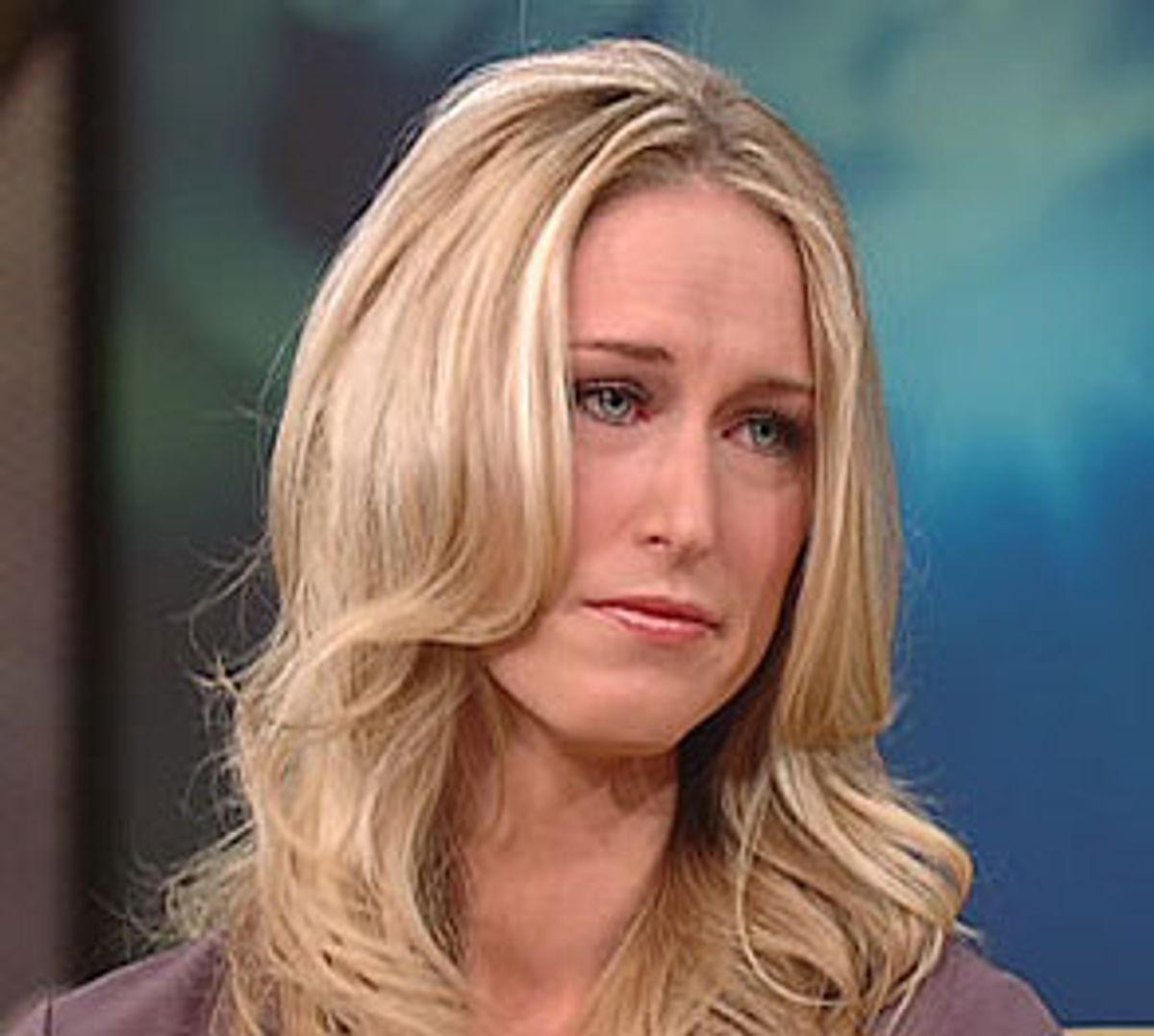 Oprah was visibly agitated. She tapes her show before a live audience, after all, but her guest on Wednesday, Amber Frey, mostly just stared back at her, blankly. You'd think that the ex-girlfriend of Scott Peterson, the fertilizer salesman who was convicted in November of murdering his pregnant wife, Laci, would be a little bit more animated, or slightly outspoken, or maybe a little trashy, or at the very least, a decent storyteller. No such luck.

Oprah: And then what was Scott's reaction [to being confronted by Amber's best friend about being married, just a few weeks before Laci disappeared]?

Amber: Basically, the lies began again . . . or they extended. [Searches for words.]

Oprah: So the best friend calls him up ... I know the story better than you do, at this point! So, let me tell you what happened! She calls him up, and she says, "Don't tell me I set up my best friend with a married man!" And Scott starts to cry on the phone and says, "I was married, but I lost my wife, and it's been so painful for me, I haven't been able to discuss it."

Too bad the best friend or the murdering sociopath weren't around to provide some spectacle, because during the mega-media blitz that began this week for her new book, "Witness: For the Prosecution of Scott Peterson," Amber Frey offered little more than a parable on the dangers of having seriously indiscriminating taste (not unlike the millions of TV viewers who sat all the way through one of her stultifying appearances).

On camera, she just looks empty. Unlike most of the made-over, sound-bite-friendly, camera-ready faux celebrities paraded in front of us, Amber offers us the polar opposite of movie-star charm: She has not even the slightest hint of a personality, her desolate face reflects very little emotion, and she responds to every question with vagaries and generalities. She doesn't take a stand on any point, and allows Oprah and Matt Lauer (a day earlier, on NBC's "Dateline") to fill in the salacious details for her. She's neither beautiful nor ugly, clever nor ignorant, naive nor world-weary, and doesn't have a shred of the freak appeal of, say, O.J. murder trial witness Kato Kaelin. Throughout her media appearances and in her book, Amber offers astoundingly few insights into Scott's psyche or her own, and doesn't seem to have reflected on the meaning of any of it, except that she feels sympathy for the victims.

In fact, only a handful of details stand out in the book. Namely:

Despite having made some questionable decisions, Amber never comes across as hapless or even unreasonable. In fact, she is consistently easygoing and accepting in dealing with Scott. She refuses to interrogate him or question his motives, and doesn't feel it's her right to judge him. She's the ultimate low-maintenance girlfriend, the kind of woman who gives more high-strung, high-maintenance mortals a bad name.

In her book, Amber recalls reading an article in which a friend of Scott's remembered that, at a gathering at the Petersons, Scott had spilled some wine on the couch, and Laci had become very upset over it. Reading this made Amber remember how Scott had been so impressed when he spilled wine on her couch, and she laughed it off. "You are so great," he'd said. "I can't believe you didn't throw a fit over that, like most women."

Amber wasn't "most women," and as such earned the sort of praise often won by the brand new girlfriend or the other woman or the long-distance love, the one who always has on fresh lipstick, the one who doesn't have to rewash the same pots every morning or pick up the same boxers off the floor every night. Such praise tells a woman very clearly: "You're better than other women" or "You're better than she is." Such praise is, in itself, a red flag -- at least to more neurotic, high-maintenance types.

But in contrast, perhaps, to Laci, Amber was supernaturally easy-going, a blank slate for Scott's tall tales. She didn't want to get in the way or make a big deal out of anything. At every step, Amber seemed to fear demanding too much from Scott.

So we come back to Oprah's story, where Amber's best friend confronts Scott and he cries, then goes to Amber's house and admits that he's been married before, but that he "lost" his wife. He tells Amber he'll understand if she's angry at him.

Amber's response: Why would she be angry? She's disappointed that he lied, but -- still unaware that his wife isn't "lost" but technically "missing" and probably "dead" -- she can understand why he wouldn't want to discuss it.

This is, of course, utterly unthinkable to "most women," who would immediately fire off a barrage of questions: "When were you married? For how long? Did she die? How did she die? Are you over it?" Would it be inappropriate to ask such questions of a man whom you're already sleeping with, a man who picked up your child at day care, whose face will appear with yours in a Christmas card?

Instead, Amber wondered out loud about it to her friends, but said nothing to Scott. And when you think about how little she pressed him on such an important and life-changing subject, it also makes you wonder how much information she had about him in general. Did she press him about anything? How much did she need to know about him before she fell in love? It's as if anyone could've whipped out a bottle of champagne and won her heart. All it took was an elaborate seafood lasagna.

Beyond her courage to do the right thing by going to the police -- which, let's face it, was nothing she should be congratulated for -- Amber could have offered us ideas or angles on the case outside of her feelings of compassion for the victims, compassion that only shows she has a lot in common with thousands of other people who offered their support to Laci's family. Amber could have given us a message about domestic violence, and said a few words about the fact that, while adorable pregnant white girls with dimples capture the media's attention, countless women are abused and killed by their husbands and boyfriends in this country every single day. Amber could have provided a cautionary tale for other women: Be more suspicious! Or maybe: Ask basic questions!

But what's really sad about Amber is not that she wasn't suspicious enough -- after all, murdering, sociopathic liars are far more difficult to catch in the act than your regular, everyday liars, and our chances of stumbling into someone as disturbed as Scott Peterson are, thankfully, relatively slim. What's truly sad is the empty space in anyone's life that is so quickly and easily filled by the closest proximity to a man vaguely resembling "The One." He was cute. He was nice to her daughter. He made lasagna. Forget that he traveled constantly, or that she seemed to know so little about him. She had a toddler, and a space in her life for a man, no questions asked. At the end of her week in the spotlight, that's the only thing about her that seems truly memorable.