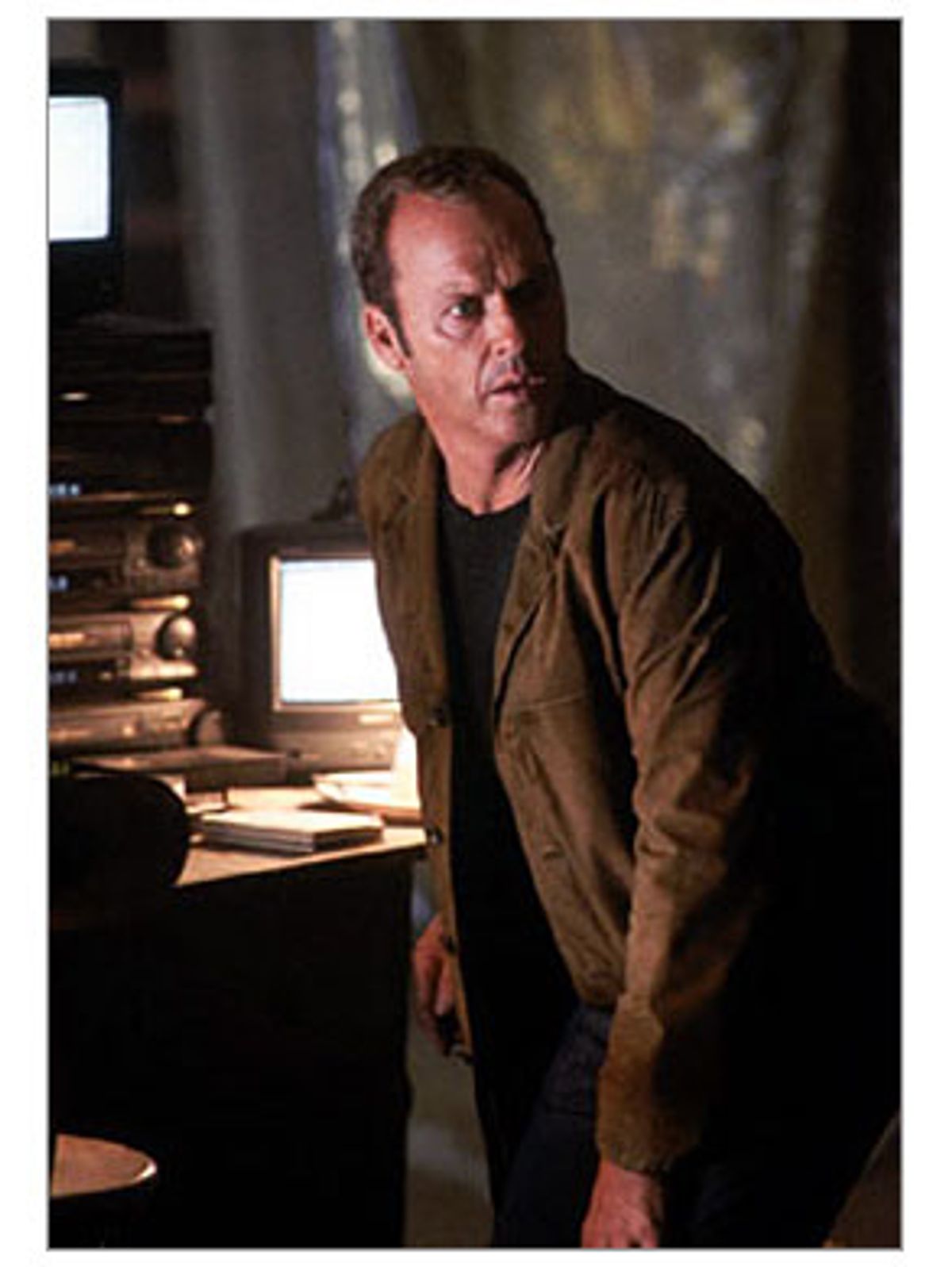 "White Noise" is the kind of movie that leads you to question your judgment about what makes a good supernatural thriller. It has plenty of problems -- chief among them, the fact that the end doesn't make much sense, and the first half crawls along on arty little ghost feet. But toward the second half, "White Noise" turns into something the first half doesn't quite prepare you for -- the movie takes on a dry, creepy sheen. Even if its dorky climax throws you out of the mood again, there are staticky bits of "White Noise" that still manage to cling.

Michael Keaton plays Jonathan, a bigwig architect married to a novelist, Anna (Chandra West), who's an even bigger wig: Her kajillionth hugely successful novel is about to come out. (It has a shadowy grayish photo on the jacket and bears the doomy title "The Eternal Wait.") But when Anna chirpily takes off in her expensive little car, with Jonathan's son from a previous marriage in the back seat -- she's dropping him off after a weekend visit -- we know she's a goner. The kid is spared (although he virtually disappears from the movie, showing up only now and then to remind his neglectful dad that he's still alive and might like to have some macaroni and cheese or something). But Anna's car is found, with a punctured tire, by the side of a river, and her body is recovered a few weeks later.

The grieving Jonathan tries to get on with his life, but strange things keep happening. Radios turn on spontaneously, spitting and hissing garbled nonsense. He starts receiving calls ostensibly made from Anna's cellphone, even when he's holding that very phone in his hand. And one day, he's contacted by a friendly chap named Raymond (Ian McNeice), who tells Jonathan that he's been picking up messages from Anna from beyond the grave. Raymond, who lost a son himself, is a specialist in electronic voice phenomena (EVP), and he spends his days in his cozily cluttered home at the switchboard of the dead: a bank of computers, monitors, stereo speakers and tape decks that he's set up to pick up and record communiqués from the other side.

Jonathan, at first skeptical that these buzzing fuzz boxes can do anything more than give him a splitting headache, ultimately becomes obsessed with them, desperate for even just a blip of a word from his dead wife. And he eventually gets it. But there's something even spookier going on, involving three mysterious, faceless dark figures who keep showing up, silently, on the electronic landscape.

At first, "White Noise," which was written by Niall Johnson and directed by Geoffrey Sax, who has worked in British television, goes for every possible cheap shock tactic: The soundtrack features lots of cellphones going off loudly at inopportune moments -- kind of like being in a movie theater, really, and not much scarier. A plot twist involving a fellow EVP-fanatic (played by the eternally sleepy-looking Deborah Kara Unger, whose permanent expression seems to be that of a lizard sunning itself on a rock) takes the movie into some not particularly interesting territory. And while it's a pleasure to see Keaton in a movie -- any movie -- even he has difficulty giving this character a palette of moods beyond mopeyness and wild-eyed obsession.

And yet -- there are those fuzzy, disembodied voices calling out from behind the slick, shiny surfaces of those video screens and computer monitors. They're the voices of the dead, lots of them, and they're accompanied by shaky images that look something like ultrasound pictures -- there's something eerily unformed-looking about them, and their suggestiveness is scarier than anything we see directly.

"White Noise" does feature one or two jump-out-of-your-skin moments, and while I happened to see the first one coming, my friend and colleague David Edelstein, normally a hearty and intuitive soul, apparently didn't: He screamed and virtually leapt into my lap, causing a kerfuffle that radiated through four rows of the theater. And so, while we critics huff and puff about which plot devices don't work and how much the first half drags, "White Noise" ultimately gets the last laugh. Gotcha.