Publishing tool LiveJournal nurtures a dazzling array of unorthodox subcultures. But will diversity continue to flourish in the wake of its purchase by blogging start-up Six Apart? 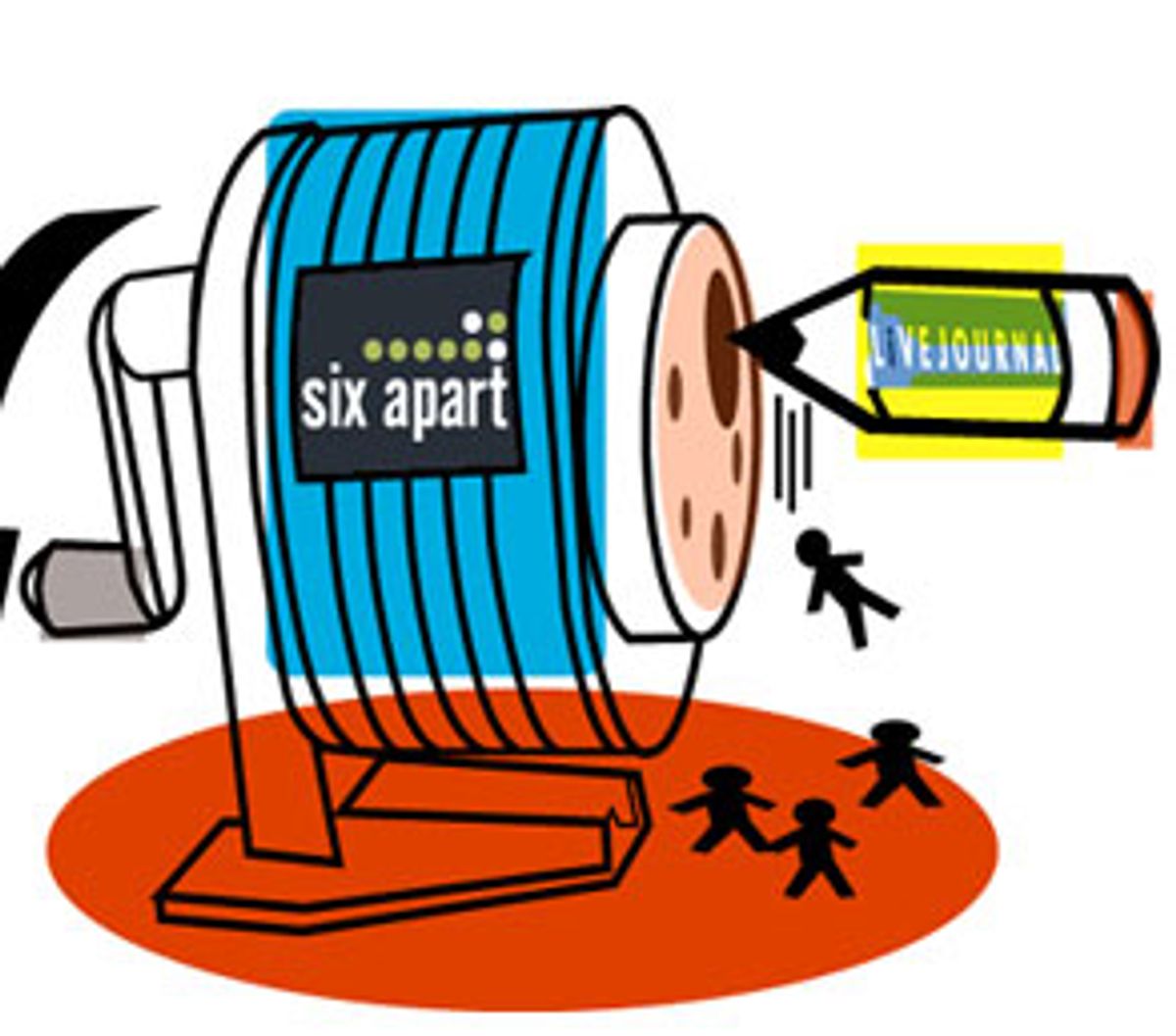 The Internet has always been a special place for freaks, geeks, queers and other alienated populations. Online, these marginalized members of society created communities that relished their idiosyncrasies. Collectively, they helped one another take pride in their identities and practices -- whether the passion be learning how to make synthetic hair, collecting Japanese manga or engaging in sexual practices frowned on by the mainstream.

The result is an infrastructure of support for a new form of social solidarity -- a set of collective beliefs, practices and values -- that operates outside of the dominant culture. Most important, these communities have been created virtually, across space, a feature that is particularly valuable for nonmobile populations -- teens without driver's licenses, for instance.

Right now, the communities grouped together by LiveJournal offer one of the most vibrant examples of online subcultural vitality. LiveJournal, according to its own current description, is a "personal publishing tool." But it's much more than that: To its users, LiveJournal is still a community where you can offer "an up-to-the-minute log of whatever you're doing, when you're doing it" and control who gets to see this.

For a service whose active users number in the millions, LiveJournal's demographics skew athwart the mainstream: younger, more female and more resistant to the dominant culture. And in a business climate where the word "blog" is on every other Web observer's lips, even the tools used by the alienated have become desirable to investors. Thus the news, confirmed on Thursday, that the company had been purchased by the venture-capital-backed blogging technology start-up Six Apart. For those of us who care about keeping space open for anyone who veers from the straight and narrow, this business deal is cause for concern.

Over the years, a variety of digital tools have been used to support online subcultures -- Usenet, Yahoogroups, EzBoard, specialized Web communities, etc. But right now, LiveJournal brings together a set of software applications that are nurturing one of the most robust and thriving arrays of subcultural communities anywhere online. The variety of communities supported is amazing and, to some people, disturbing or even terrifying, such as the communities of people engaged in self-mutilation or eating disorders. But this is all part of subcultural life -- good and bad. And one of the things that makes LiveJournal special is that it is not just a set of software applications. There is also an extensive network of emotional support, both formally and informally.

The dominant culture has a habit of demonizing anything it doesn't understand -- particularly those subcultures that are formed by marginalized populations who are often resisting aspects of mainstream life. But these subcultures play a critical social role: They help restabilize individuals in a society trapped in perpetual anomie.

Anomie -- a term popularized in sociology by Emile Durkheim -- refers to the state of ultimate societal loss of moral direction and meaning. At its most extreme, cultural anomie results in cultural and individual suicide.

Society has already ostracized many marginalized individuals, placing them in a position of limbo, making them uncertain about how to find meaning and grounding. People who have participated in subcultural life were often alienated by mainstream society long before they found supportive communities. Subcultural participation becomes an act of self-empowerment whereby individuals find a community that loves them for who they are instead of trying to encourage them to be cookie-cutter members of society.

This is not to say that one should romanticize subcultures. Yet, for some, those who have been flung from the ropes of mainstream society, subcultures are a safety net.

Over the years, I have spoken with many individuals for whom LiveJournal has served as that safety net -- people who did not have a community of like-minded souls in their everyday life but found direction online. This is not to say that the larger blogosphere does not offer this kind of support for some. It truly does. Yet, consistently, LiveJournal supports some of the most at-risk individuals, the most explicit subcultures. The LJ community knows how to support these individuals, and I am in particular awe of LJ's support/abuse team for doing what is needed when things get out of hand.

It is for this reason that my heart started beating rapidly when Six Apart decided to purchase LiveJournal. Although this sale may seem like the merger of two prominent blogging companies, it is not that simple. LiveJournal has a particular kind of culture that has formed very distinct from the broader "blogosphere."

Six Apart consistently provides excellent tools for those who want to be bloggers, but they started by building tools, not by building community. Whether LiveJournal founder Brad Fitzpatrick intended to or not, he created a community that exists far beyond his tools.

Even though 2004 has been marked as the Year of the Blog, there is no universal blogging culture nor even a common definition of the term. There are many different cultures within the blogosphere and within LiveJournal -- cultures with different needs, desires, intentions. Yet, at the broadest level, the culture of LiveJournal is distinct from the culture of the blogosphere, even if the actual practice is quite similar: to share that which is most meaningful to you with those who will be interested.

The distinction is often categorized by the terms "amateur journalism" as opposed to "public diarying" -- an unfortunate dichotomy that is awkward and fails to represent most of what bloggers and LJers do. Yet in terms of identification, there is often a split. Most people who use LiveJournal talk about their "LJ," not their "blog."

There is no doubt that Six Apart recognizes and values LiveJournal and the community that is embedded in it. At BlogTalk in Vienna, Austria, Mena Trott (the president of Six Apart) began her speech by stating that "I feel strongly -- and have always -- that personal weblogs are often marginalized because of their presumed triviality." She chastised self-identified bloggers for dismissing practices that appeared different from their own. But Trott also recognized cultural differences, noting that her original conception of bloggers reflected those who valued punditry and sought very large audiences to challenge journalism and politics. But through her work on TypePad -- a blogging service hosted by Six Apart -- she realized that there was an extensive population of bloggers who did not have these goals in mind -- they wanted to post only for their friends and family.

It is the intimacy of friends, family and people-like-me that LiveJournal has fostered. When Six Apart bought LiveJournal, it did not simply purchase a tool -- it bought a culture. LJ challenges a lot of assumptions about blogging, and its users have different needs. They typically value communication and identity development over publishing and reaching mass audiences. The culture is a vast array of intimate groups, many of whom want that intimacy preserved. LiveJournal is not a lowbrow version of blogging; it is a practice with different values and needs, focused far more on social solidarity, cultural work and support than the typical blog. It is heavily female, young and resistant. There is no doubt that Six Apart values this, and it should. But at the same time, the act of purchasing someone's house does require responsibility if you want to do right by the tenants, even when those tenants look nothing like any other tenants you have ever seen.

The freaks, geeks and queers need LiveJournal now more than ever before -- they need the safety net that will help them find grounding. My hope is that Six Apart will learn from LiveJournal and treat LJers with nonpatronizing respect. In essence, the company must first value the social contract and culture that are LiveJournal and then let LiveJournal teach it how to make those better.

danah boyd is a Ph.D student at the University of California, Berkeley where she studies sociable media. She also blogs at apophenia.