Bush's Cabinet nominees sport bios straight from Horatio Alger, but his policies will kick hardworking Americans off the ladder of success. 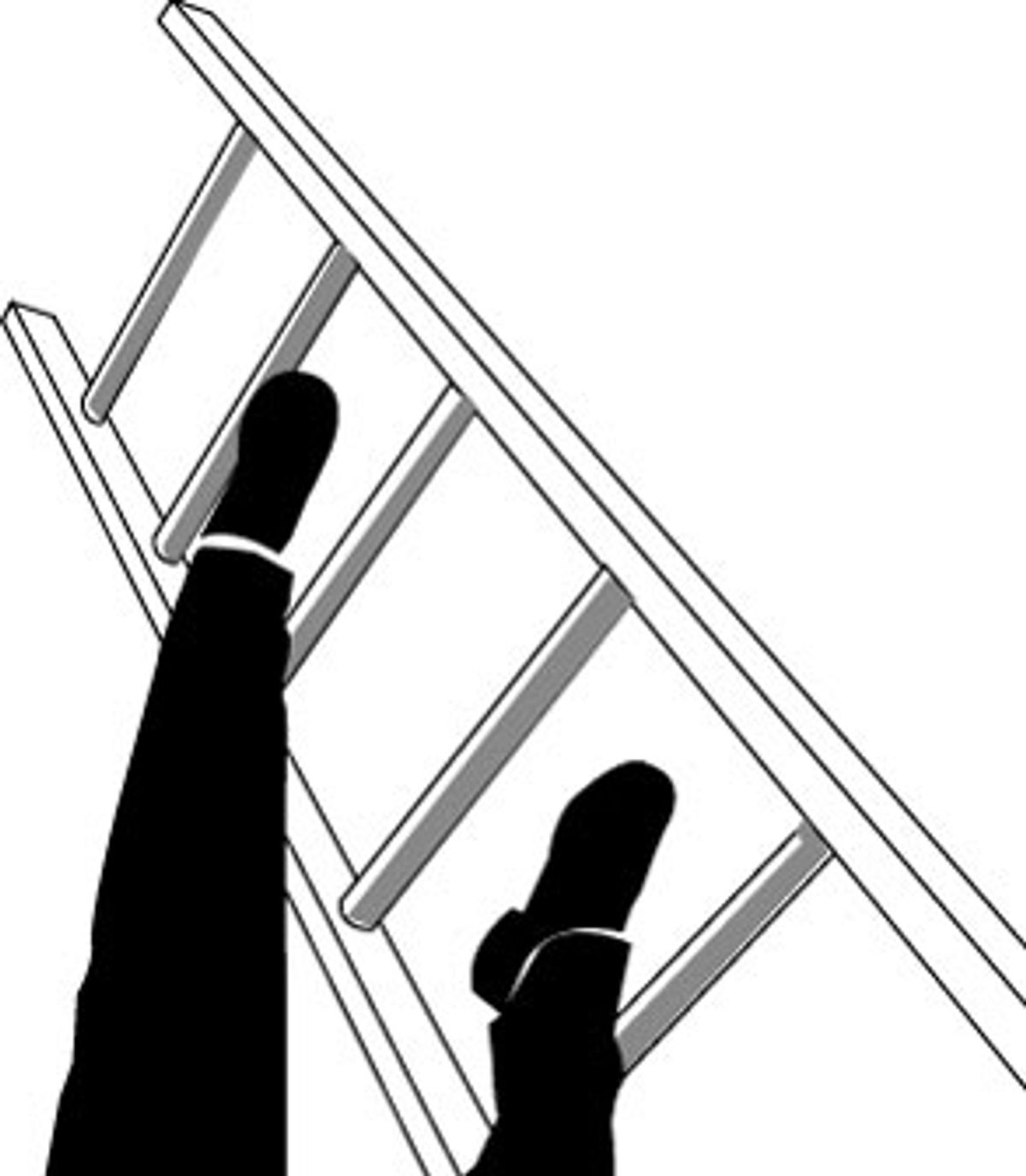 In "Ragged Dick," Horatio Alger's novel about an enterprising bootblack, one of the author's fictitious benefactors offers the following rosy observation of upward mobility in America: "In this free country poverty is no bar to a man's advancement." The belief that individual effort can override social circumstances runs deep in the national psyche. It's in Ben Franklin, in Alger's immensely popular 19th century novels -- and most recently in the official speeches and well-publicized personal stories of two of George W. Bush's Cabinet nominees, Carlos Gutierrez and Alberto Gonzales. It would have been part of homeland security nominee Bernard Kerik's gloss, too -- he was the son of a prostitute and a high-school dropout -- but other social circumstances prevailed.

Indeed, Republican strategists have long sought candidates and nominees with up-from-the-bootstraps personal histories -- an observation made nearly 50 years ago by New York Times columnist James Reston -- and in Gutierrez and Gonzales, they have two exemplars. At Gonzales' Senate confirmation hearing last Thursday, Sen. Arlen Specter even called the judge's life a "Horatio Alger story." By now, his and Gutierrez' stories are well known. Gonzales was born the son of migrant farmworkers, one of seven siblings living in a two-bedroom house with no hot water and phone. He took his first job at 12, eventually went to Harvard Law School and rose through Texas politics to become Bush's White House counsel. Gutierrez, a Cuban refugee who was 6 years old when his family fled to the States with little money, learned English from a Miami bellhop. He began his career selling Kellogg's Frosted Flakes from a van in Mexico, and nearly 25 years later ascended to CEO.

Gutierrez and Gonzales are clearly exceptional men, and their inspiring stories are served up as evidence of their character and worthiness to serve the nation. Yet Bush's selection of them for Cabinet posts, shrewd on several levels, also warrants examination as cunning political strategy. In choosing them, Bush appeals to Cuban-American and Mexican-American constituencies. And in celebrating these rags-to-riches stories, Bush offers the promise of upward mobility. When Bush named Gutierrez, he called him "a great American success story" and "an inspiration to millions of men and women who dream of a better life." By association, the administration counters the perception that the GOP is the party of privilege, and suggests that with Republicans in charge, even people of modest means can prosper and ascend to power: Cabinet member as Everyman. This message is hugely important as the Republican Party continues to court lower- and middle-income voters.

But there is duplicity at the core of the message. Even as Bush holds out Gonzales and Gutierrez as symbols of opportunity, his administration's policies systematically erode opportunity for working people. Since Ronald Reagan's presidency, and with increased vigor under George W. Bush, the nation has witnessed a rolling back of the social protections of the welfare state, a carefully orchestrated opposition to safeguards against inequality and, with that, a widening income gap. The rich -- the very rich, especially -- are getting much richer, the middle stagnates, and the poor fall off the charts. Opportunity is championed while unions are threatened, workplace health and safety regulations eroded, and an increase in the minimum wage stonewalled.

And yet, one of the most striking things about rags-to-riches, Republican-style tales is that they are accounts of hardship with almost no feel of hardship to them. They reflect a kind of opportunity that exists only in a reactionary fable. (And here they differ significantly from the Horatio Alger originals.) Obstacles receive brief mention -- if they're mentioned at all -- and anger, doubt or despair are virtually absent. You won't see the female cannery worker with injured hands or the guys at bitter loose ends when the factory closes. You won't see people, exhausted, shuttling between two or more jobs to make a living or the anxious scramble for minimal healthcare for their kids.

The GOP stories present a world stripped of the physical and moral insult of poverty, not just sanitized -- a criticism often and legitimately made -- but also distilled, a clean pencil sketch of existence without complication. These tales appear in the Republican rhetoric surrounding any issue dealing with poverty, such as public housing, entitlement programs or welfare-to-work. This erasure of poverty's afflictions makes sense. To do otherwise is to make palpable the dark side of capitalism and the injuries of social class. And conservative strategists have been working very hard, and effectively, to bleach an understanding of class from the public mind.

Along the landscape of Republican rags-to-riches stories, characters move upward, driven by self-reliance, optimism, faith, responsibility. Though there will be an occasional reference to teachers or employers who were impressed with the candidate's qualities, the explanations for the candidate's achievements rest pretty much within his or her individual spirit. The one exception is parents: They are usually mentioned as the source of virtue. Family values as the core of economic mobility.

In the Alger originals, the lucky break, the fortuitous encounter is key to the enterprising hero's ascent. There's little play of chance in the contemporary Republican version. Luck's got nothing to do with it. Nor, it seems, does raw ambition and deal making. There is not a hint of the red tooth and claw of organizational life in these tales. And you surely will not hear a whisper about legislation or social movements that may have enhanced opportunity, opened a door, or removed an obstacle. It would be hard to find a more radically individual portrait of achievement. It should be said that social and economic mobility is possible in the United States, more so than in many other countries. It's right to honor it. But does it happen as depicted in the Republican success stories?

In my experience, no. My parents emigrated from Southern Italy in the 1920s, came up very poor, and never finished elementary school. My father took sick when I was young, and my mother supported us as a waitress, always worrying about survival. I drifted through school, somnambulant, until my last year of high school when an English teacher encouraged me, kept after me, and managed to get me into a small college on probation. After one dicey year, I again encountered some immensely helpful teachers who started me on a winding journey that would lead eventually to my career as a college professor. Much of the journey was economically uneven, and if it were not for loans, scholarships and a range of state and federal programs, I wouldn't have made it. Along the way, I've taught many people with backgrounds like my own. And in the last two decades I have met and interviewed many more.

The stories of mobility I have heard differ greatly from the Republican script. To be sure, there is hard work and perseverance and faith -- sometimes deeply religious faith. But many people with these same characteristics don't make it out of poverty. Discrimination is intractable, or the local economy devastated to the core, or the consequences of poor education cannot be overcome, or one's health gives out, or family ties (and, often, tragedy) overwhelm.

The ones that do succeed -- and their gains are typically modest -- often tell stories of success mixed with setbacks, of two steps forward and one back. Such stories reveal anger and nagging worry, or compromise and ambivalence, or a bruising confrontation with one's real or imagined inadequacies -- "falling down within me," as one woman in an adult literacy program put it. This is the lived experience of social class. No wonder that these stories typically give great significance to help of some kind, both private and public. A relative, a friend, or a minister lends a hand. Family and community social networks open up an opportunity. A local occupational center provides training. The government's safety net -- welfare, Medicaid, public housing -- shelters one from devastation.

It is the right's grand ambition, as William Greider observed several years ago, to roll back the 20th century, to take us back, in policy terms, to the McKinley era. That was a time before the protections of the New Deal and the Great Society, a time of unregulated corporate power and a Social Darwinist view of the social order. The goal is to move the nation, increasingly and on many levels, from education to healthcare to the environment, to the local over the global, the individual over the group, the private over the public. The conservatives would keep government out and let the market determine the order of things.

This is the ideological back story to the feel-good celebrations of Gonzales' and Gutierrez' rise from hardship. As the political agenda of the Bush administration is realized, more and more Americans will be stuck in poverty. Rags-to-riches stories have always been one part possibility, two parts fantasy. But in the present case, there's a bitter deceit involved. Perhaps as antidote, following Greider's lead, we should reread "The Jungle" or "The Shame of the Cities," placing those early 20th century accounts of industrial brutality and urban squalor alongside Republican narratives of success. People like those I grew up with and have worked with over the years will be terribly hurt in the world George W. Bush is creating, the ladder of success kicked out from under them.

Mike Rose is on the faculty of the UCLA Graduate School of Education and Information Studies and author of The Mind at Work: Valuing the Intelligence of The American Worker (Viking, 2004).