"24" returns with another bad boss, another evil mastermind and another reason for Jack to play the renegade. But it clings a little too close for comfort to today's nightmares. 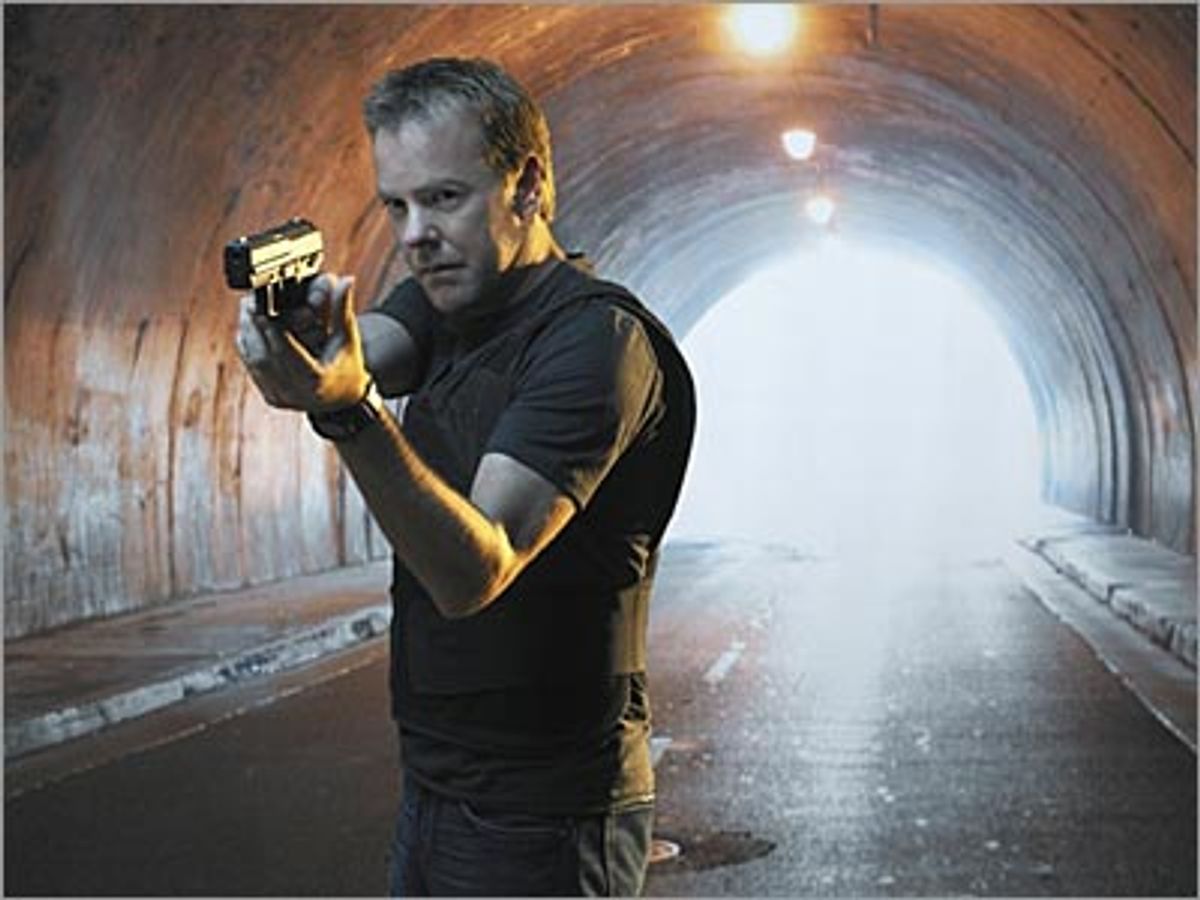 Tuning in for the fourth season of "24," it's tough not to feel like you've seen it all before. Although the show started its two-night, four-hour debut on Sunday with dramatic changes -- a new, more hawkish president, a new, more eeeevil head of CTU, a new job for Jack Bauer (Kiefer Sutherland), and no darling daughter Kim in sight -- by halfway through the second hour of yet another very long and perilous day, Jack was back in the field as a CTU agent, thwarting authority and following his own devil-may-care plan to save his new love interest, Audrey (Kim Raver), and his new boss, Defense Secretary James Heller (William Devane), from being killed by terrorists.

It makes sense that the writers of "24" (Mondays at 9 p.m. on Fox) would linger in familiar territory, after trying to color a little too far outside the lines last season, only to see the momentum built in the first few episodes peter out quickly. From Jack's strangely peripheral trip to Mexico to President Palmer's dead-end subplot involving an investor capable of blocking important legislation (Oh my!), the limits of the show's guiding gimmick were laid bare, and it took a deadly virus laying waste to a hotel filled with innocents just to get Jack and company back onto that good ol' sensationalist, heart-pounding terra firma where they belong.

But while it's difficult to fault the writers for staying close to surefire sensationalist tricks certain to raise your heart rate a notch or two, it's still jolting to find yourself back in their ruthless company once again. You can almost see the writers, sitting around a big table, sucking down the dregs of lukewarm lattés and winding into full fear-mongering gear. "Hey, guys, why don't we have the terrorists senselessly execute an office full of graphic designers, just to find the hacker who noticed the code that looked poised to launch an attack on the Internet?" "Yeah! And I know -- let's take that really sympathetic family from 'House of Sand and Fog,' substitute an evil mastermind for Ben Kingsley, and make them all do really bad stuff, like poison pretty blond teenagers!"

Blame it on the caffeine if you can, but you still have to wonder about the writer who suggested that they whip out the now all-too-familiar image of a bound, gagged and blindfolded kidnapping victim, kneeling in front of Middle Eastern men in masks. As dirty as it felt to cheer on a gruesome virus last season, there's something deeply disturbing about lifting such a horrible, haunting image straight out of the news to make Heller's kidnapping all the more real to viewers. Loyal fans of "24" will recall the second season, when footage of kidnappings and tapes of Osama bin Laden would regularly air on the local news right after each episode. Can't we get a little grace period to deal with the horrors of our times, before they're repurposed and dramatized in our fictional shows?

Die-hard fans will surely argue that this is the scorched emotional landscape on which "24" must build its precarious house of cards, lest we end up in Mexico, bickering with a gaggle of drug lords.

That's also why we need Erin Driscoll (Alberta Watson), the bossiest, most impractical head of CTU ever. She fired Jack! She's mean! But, oh, she has a schizophrenic daughter! Poor Erin! And don't we absolutely require sexy-evil Marianne (Aisha Tyler), the "consultant" whose malevolent, manipulative ways are meant to serve as a cheap substitute for creepy first lady Sherry Palmer? Now let's see, should Counter Terrorist Units really hire consultants on the fly like that, particularly when the consultant in question basically blackmailed Driscoll into offering her the job by claiming that Curtis (Roger Cross) gave her privileged information? The best line so far had to be Driscoll's summary of the dangers of not giving Marianne the job: "She could force us into a Section One security reboot and drag us through a six-month investigation!" Well, she sounds like a great gal to have onboard, doesn't she?

You also have to love William Devane as Defense Secretary Heller. When he tells his daughter, Audrey, that she needs to try to escape as their captors are occupied with putting him on trial before his execution, it may be one of the most believable emotional moments in the show's history. "I want you to live your life -- a full life," he says through gritted, James Cagney teeth. "I want you to have a family. That's all I care about. You're my baby." Instead of overacting, Devane sticks to his tough-dad delivery and in so doing, he makes the scene heartbreakingly convincing.

Meanwhile, back at the House of Sand and Fog, earnest son Behrooz is struggling with the sudden death of his girlfriend, mostly by staring at his mom (Oscar-nominated Shohreh Aghdashloo) blankly. Mom sure isn't messing around today. Still, it's easy to suspect that, this time, Behrooz isn't going down like that, and will likely turn from the Dark Side of the Force just in time to help renegade Jack save his new damsel in distress.

Or, maybe the writers will kill Jack and his new lady! Maybe they'll even kill Chloe, and that poor hapless Edgar! Maybe they'll kill the president and the administration, and the country will be forced into a Section One security reboot, at which point former President Palmer -- maybe he's the house speaker -- will be next in line for the top job! Forget the terrorists -- it's the writers we really fear around here.

At the very least, the terrorists have bigger fish than Heller to fry, and given the abandon with which the writers have ripped these images and stories straight from the headlines (and from the Academy queue) and thrown them into their noxiously suspenseful stew, it's safe to predict that this season of "24" will reflect these uneasy times more than ever before. The question is, can you stomach it?