It's 2005 and newly separated starlet Jennifer Aniston is -- surprise! -- being pilloried for putting her career before motherhood. 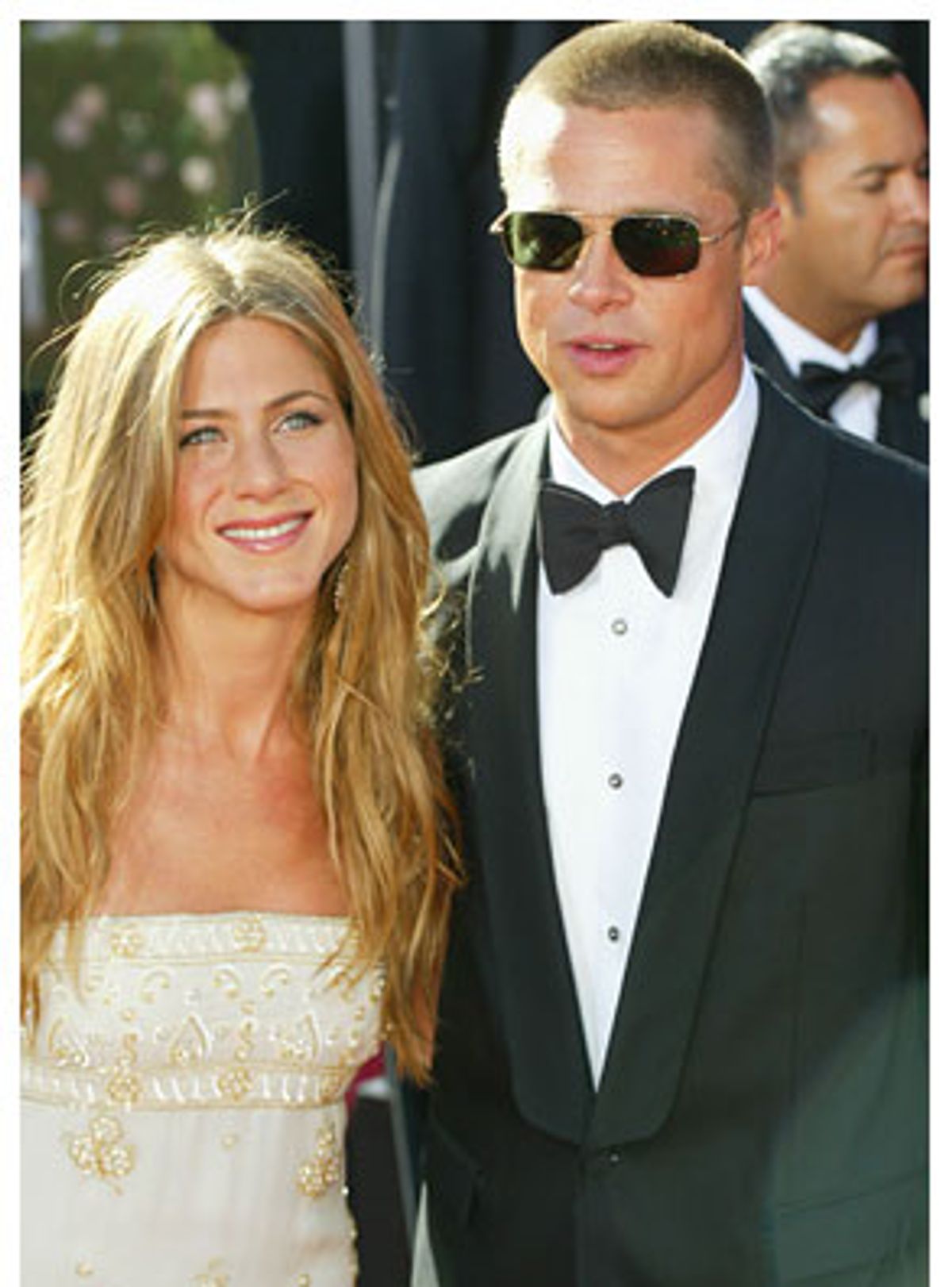 In a Friday evening press release announcing their separation, Brad Pitt and Jennifer Aniston made a startlingly direct address to those who have been tracking their marital fortunes with the ardor of Red Sox fans. "For those who follow these sorts of things, we would like to explain that our separation is not the result of any speculation reported by the tabloid media. This decision is the result of much thoughtful consideration," read the press release. "We ask in advance for your kindness and sensitivity in the coming months."

The tabloid press responded to this cuffing with a giant "Whatever, dudes!" and a prompt avalanche of stories cheerfully regurgitating exactly the same speculation they've been churning out since the beginning of the Aniston-Pitt dynasty: He wanted kids, she wanted a career, he got tired of waiting.

The media lesson we're all being fed in the wake of the breakup -- whether it bears even a passing resemblance to the realities of Pitt and Aniston's marriage -- is glaringly clear: You may land a hot husband, ladies, but you'd better pop one out soon, or you won't keep him.

For the four and a half years since their wedding, the coverage of the Aniston-Pitts has included near daily checks of Aniston's frustratingly flat belly. There have been stories about her supposed trips to fertility clinics, and detailed records of every baby gift she ever lavished on former "Friends" costar Courteney Cox Arquette's new kid, Coco. She even mocked the way she was constantly hounded about her reproductive -- rather than her cinematic -- future on "Saturday Night Live," when she played a paparazzo yelling at Jennifer Aniston, "When are you going to have a baby?"

Then there have been the stories about Pitt's desire to bed his costar, Angelina Jolie, in the upcoming "Mr. And Mrs. Smith," mostly, it seems, because she has a cute son. Pitt hasn't helped matters by dragging his sorry ass around town and opining to anyone who'll listen -- Vanity Fair, Diane Sawyer -- about how eager he is for kids. "We've been in rehearsals for long enough," he told CNN, with a whiny candor that I hope earned him a tongue-lashing.

But now that the marriage seems to be ending, the press is gleefully dancing on a grave that they have dug: one that contains the corpse of a marriage that does not bear fruit. It's a regressive and scary message to women: No matter how rich, thin, beautiful or talented, what really makes us attractive -- after a few years of marriage anyway -- is our ability and willingness to reproduce on demand!

In highly speculative weekend coverage of the story, both the New York Post and the New York Daily News put the breakup on their covers; their tut-tutting could barely be suppressed.

The Daily News noted that after Aniston's hit show, "Friends," ended last year, "both fans and Pitt began pressuring Aniston, 35, to have a baby. Pitt made it clear to anyone who listened that he was ready for a change of life and to have children." The News story reported that the couple had a nursery built into their Beverly Hills home, and even suggested that the issue of children "really hit home" when Pitt's ex-fiancée Gwyneth Paltrow had a baby and started cooing everywhere about the all-consuming fulfillment of motherhood. The paper conceded that Aniston acknowledged that she'd like to have children and sometimes wore a fertility medallion. (Then again, wouldn't you throw on a fertility medallion -- or 12 -- if you had millions of people practically threatening to behead you unless you produced an heir?) "But," the story went on, "Aniston also set up a brutally heavy four-film work schedule that would leave her little time for motherhood in the next three years." An accompanying article quoted New York family therapist Jane Greer as saying, "It was really inevitable ... It was really just a matter of time."

The rest of the early coverage was in the same vein. The Star, quickly amending an on-stands cover headline that squealed, "Brad & Jen Back On: It's Baby Time!" posted an online story reporting that "He wanted children, while she was pursuing a full-time career as a film star after a 10-year successful run playing Rachel on Friends." As if to suggest that 10 years of superstardom really should be enough to satisfy any ambitious young woman. By Sunday, the Post's "Had to Be Dad" cover story was quoting unnamed sources who said that "Aniston doesn't want to take the time off to have a kid -- and she doesn't want to endure the physical effects that giving birth will have on her sexy body."

Then there is the Jolie factor. According to the Post, Pitt hit it off with his costar, not because he was "craving Jolie's pillowy lips and 'Tomb Raider' physique -- but time with her 3-year-old son, Maddox." Other stories claim that Jolie urged Pitt to stick it out in his marriage and awakened a passion in him for humanitarian and political work.

Jolie's role in the coverage of the Pitt-Aniston bust-up has been startling on several levels, and speaks quite terrifyingly to the way in which we seem to be in the midst of a cultural moment in which motherhood is revered to a dangerous degree. Jolie, the stunningly beautiful and intermittently talented (see "Gia") actress, is 29 years old, and has been making her own headlines for a long time. She has multiple tattoos, and is an admitted self-mutilator and blood fetishist who likes to wear vials of her boyfriends' blood around her neck. Then there was a period where she had a very weird making-out-with-her-own-brother phase.

But that was before Jolie became an ambassador to Cambodia and adopted a son there in 2002. When she became a mother, all the gore and dirt of her overreported past dissolved in a kind of media-sponsored beatification. Nowhere is it clearer than in this Pitt-Aniston saga in which Jolie is cast as irresistible to a baby-hungry Pitt because of her natural maternal instincts (and, implicitly, her femininity). Then there's the fact that apparently toting a young son around with her makes her a veritable sage.

As for Aniston, what has happened to her is a travesty. Who knows why her marriage ended? And who cares? Sure, we love the melodrama. But please -- not when it's packaged as a morality tale that reinforces expectations and assumptions we should be well on our way to banishing.

Jennifer Aniston failed to reproduce with her husband, Brad Pitt. But her failure -- as reported between the lines of every story we're reading -- wasn't simply a fertility issue. It was an unfathomable -- though possibly temporary, at the precarious age of 35 -- prioritization of her career over her family. It was an instance in which we were treated to the sight of a woman we like, openly wanting to get further ahead professionally before giving over her life -- and yes, her body, which is a serious commodity in her business -- to the demands of childbearing and child rearing. And clearly, it still makes us uncomfortable.

Aniston's career is at a stage that's perhaps more delicate and pressing than even her blessed biological clock. She has 10 years as one of the most successful sitcom characters in television history to wipe out if she wants to become a viable movie star. And she should act fast while she is still a known quantity, and can still draw on her looks and fantastically fit body. She has four movies on deck and yes, that has meant time away from her marital bed -- and all its baby-making potential -- to shoot them. All while her husband, 41, who began the game as a full-blown movie star and "the Sexiest Man Alive" and once deigned to guest-star on her sitcom, has lowered the burner on his career and turned more attention to things like architecture and his Jolie-inspired humanitarian pursuits. In a particularly poignant fuck-you to Aniston, photographs in one of People's sidebars ("Separate Lives: The year they drifted apart") show Pitt kibbitzing with Nelson Mandela and architect Rem Koolhaas while Aniston shoots a film with Hollywood punch line Kevin Costner.

So she may be hanging with Costner while Mr. I'm-Ready-for-Children is befriending Mandela, but at 35, why is it such a crime that Aniston should want to get the good roles she's still offered and up her asking price before her female body and face begin to fall and age and literally lose their value?

The New York Daily News on Monday ran a feature in which it interviewed New York mothers about the impact of Aniston's breakup with her husband. "I still give her five years to make up her mind," one 30-year-old mother was quoted as saying, while a 36-year-old dad said, "She has time ... With technology today, people are having kids into their 50's." One grandmother said, "She can go back to a career afterward. She has to think about her biological clock."

It's enough to make us all -- movie stars and non-movie stars, moms and nonmoms, those of us married to Brad Pitt and those of us who are not -- sit back with enormous martinis and consider whether the most interesting things about us will ever cease to be our uteruses.