Bathroom humor and stoner jokes aside, this teen-pleasing, stereotype-challenging road movie has a lot to say about race in America today. 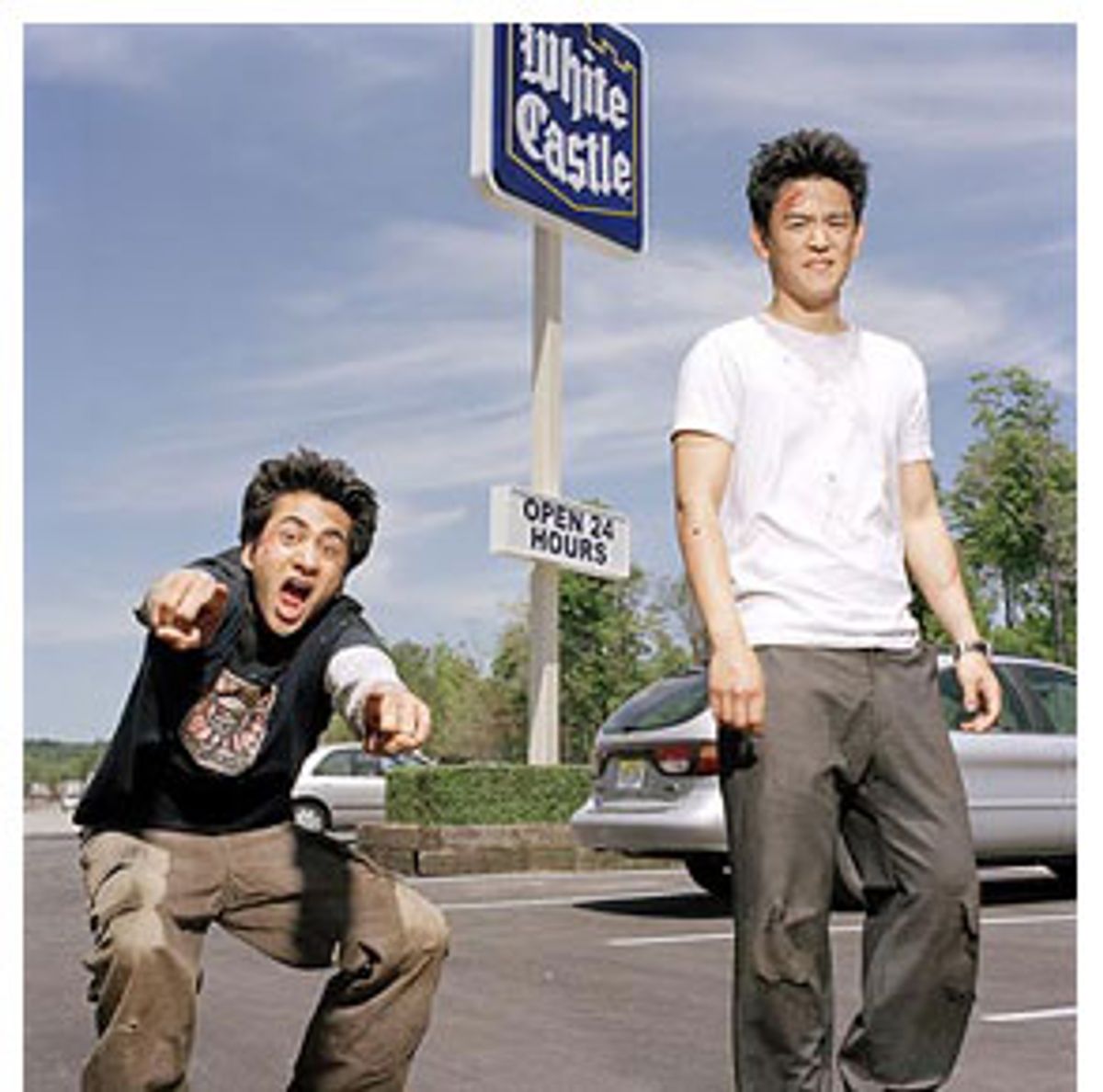 When I saw Danny Leiner's "Harold & Kumar Go to White Castle," I knew it was good. But I didn't know how good it was until I saw James L. Brooks' "Spanglish."

"Harold & Kumar" isn't a social issues movie, as "Spanglish" is, and to treat it as one is to diminish the pure pleasure it gives as a work of unabashedly dumb stoner humor. Even when they're over the top, the gags in "Harold & Kumar" have a kind of Zen garden simplicity -- they don't demand brains or logic as much as a willingness to surrender to the corner of your brain that sometimes forgets how to spell words like "accommodate" and "likability." But Leiner ("Dude, Where's My Car?"), working with writers Jon Hurwitz and Hayden Schlossberg, also seems to be angling toward something bigger, not so much in what he says as in what he doesn't say. Race is an issue in "Harold & Kumar," but it's not the issue. Without lifting a finger to make its point, "Harold & Kumar" -- now out on DVD for those who missed it in theaters -- may have said more about race in America today than any other movie of last year.

Harold Lee (John Cho, who has appeared in "American Pie" and its two sequels, although this is his first starring role) is an analyst with a big investment firm; Kumar Patel (Kal Penn), his best friend and roommate, is brilliant enough to get into medical school without even trying very hard, but for now, he's more interested in hanging out and getting high.

By day, Harold and Kumar are your stereotypical children of Asian immigrants, bright young men who work hard (or who at least know, deep in their hearts, that someday they will work hard). But just when we've wedged them into one stereotype, they wriggle out of it and into another. By night, they're lazy potheads who slouch in front of the tube, becoming dazedly susceptible to fast-food commercials, specifically one for White Castle, in which a cascade of "sliders" and fries tumble forth seductively like a blessing from above by the Almighty Himself.

There's nothing for Harold and Kumar to do but hop into Harold's car (he brings his laptop with him, so he can get some work done along the way) and look for the nearest White Castle, which is farther away from their Somewhere, N.J., apartment complex than they think. And so "Harold & Kumar" becomes a road movie, a textbook example of that comic art form that we think of as distinctively American (although in reality its origins are probably not even necessarily Western).

The journey of Harold and Kumar, our two cannabis Candides, takes them first to the Princeton campus, where Kumar goes in search of more pot, while Harold gets roped into suffering patiently through a meeting with an Asian student group. (Even though it's just a laid-back gathering in a student common area, one of its participants insists on raising his hand, eagerly but politely, every time he wants to say something.)

Once the two are back on the road, Kumar, while making a necessary pit stop, encounters a weirdo who insists on peeing on the same bush he's chosen, and Harold is attacked by a crazed raccoon. Sometime later (and it's not giving away a whole lot to tell you this), Harold winds up in jail, where he and Kumar meet an ineffably polite African-American gentleman who has been arrested for being black; there he sits, his spectacles perched on his nose, absorbed in reading "Essays on Civil Disobedience." (At one point a group of officers storm his cell, yelling, "He's got a gun!" At which point he's forced to inform them that it's not a gun, but a book.)

"Harold & Kumar" is loaded with gross-out gags -- they begin with Kumar standing naked in front of a mirror and trimming his pubes with the fastidious Harold's manicure scissors, and progressively become more outlandishly crass: At one point two lusciously attractive Princeton women with English accents are overcome by what they call "the taco shits" and let loose in a public bathroom (conveniently, one in which Harold and Kumar are hiding from a cop) with an assortment of rip-snorters and room-clearers. There can be artistry in toilet humor, and Leiner knows how to make it work. (One of the DVD extras is a faux making-of featurette explaining how the sound designer on "Harold & Kumar" collected the menagerie of noises necessary to achieve total realism in the aforementioned "battle-shits" sequence.)

There are places where "Harold & Kumar" sinks to making cheaper shots than it should: For one thing, it's littered with a few too many one-note homophobic jokes (although, admittedly, it does recognize the lameness of those jokes by turning some of them inside-out). But elsewhere, "Harold & Kumar" stretches the boundaries of offensiveness in ways that both make us laugh and make us think.

In one of my favorite movie gags of the past 10 years, David Krumholtz and Eddie Kay Thomas, as Goldstein and Rosenberg, Harold and Kumar's next-door neighbors, pals and fellow stoners (the camera lingers, mischievously, on the figure of the naked lady that adorns their mezuza), contrast the stunning, naked body of cutie-pie Katie Holmes in "The Gift" with the horror of the Holocaust. It's a joke low on taste and yet, perversely but adamantly, high on life.

I didn't get this joke the first time I heard it. In fact, I'm still not sure I completely get it -- like much stoner humor, it's more a koan than an out-and-out belly laugher. But what's most impressive about "Harold & Kumar" (not that a comedy has to be impressive at all to be any good) is that it didn't dawn on me until the movie was nearly over that its two protagonists weren't your usual average white kids. I know, I know -- what am I, stupid? The title should have at least tipped me off. And toward the end, Kumar gives a sardonically heartfelt speech about the reasons their parents came to this country in the first place.

But unlike some of the comedies aimed at African-American moviegoers released each year (some of which are quite good, although they're marketed by the studios that release them with a "pack 'em in and count the receipts" mentality that's inherently, and offensively, racist), "Harold & Kumar" is so unaggressive in the way it addresses the issue of what it means to be a minority in this country that it coaxes you into thinking about it.

Aside from being played by incredibly appealing actors, the characters of Harold and Kumar are individuals who, like all of us, fit into certain broad racial stereotypes. For instance, there are plenty of white women who live in the suburbs and shuttle their kids to soccer games who might not want to think of themselves as white suburban soccer moms, but they're fooling themselves if they believe that these stereotypes come out of nowhere. At the same time, no one wants to be viewed solely as a "white suburban soccer mom" -- just as no one wants to be viewed as "a hardworking Asian immigrant" (or child of immigrants) or "an urban African-American with limited opportunities."

Sometimes it seems that urban white liberals are their own worst enemies when it comes to blurring stereotypes. My in-laws, who are in their 70s and who live in what used to be a very white suburban New England enclave, now have more East Asian and South Asian friends -- some of whom immigrated to this country within the past 10 years -- within their community than many white city dwellers I know. Even though, in our cities, we may take pride in the fact that we live amicably among people of many different ethnicities, we don't always form friendships across those groups (possibly because class divisions are often more radical than racial ones, although the two are, of course, frustratingly intertwined).

There's something freeing in the way "Harold & Kumar" treats its characters' ethnic backgrounds not as a novelty, as a stumbling block or even as an advantage, but as a simple fact. And I acknowledge that by even addressing this angle of "Harold & Kumar," I'm in some way betraying the spirit of the picture. But the appearance of "Spanglish" on the movie landscape puts the casual liberalism of "Harold & Kumar" in a different light. Brooks has said that he was inspired to make "Spanglish" by the waves of largely Hispanic domestic workers that he sees flowing daily into his own affluent, white neighborhood. Knowing that, it's easy enough to accept that "Spanglish" was born of good intentions.

But ultimately (and if you haven't seen "Spanglish," you might want to stop reading here), the movie posits some ideas of the "value" of ethnicity that seem, frankly, weird. In "Spanglish," a woman who immigrated from Mexico with her young daughter takes a housekeeper's job in an affluent white household. Because of this, the daughter is given an opportunity to enroll in a good private school, but her mother, in the end, forbids it: Her reasoning is that she doesn't want her daughter to be too little like her and too much like "them."

In "Spanglish," that attitude doesn't hurt anyone -- in fact, the movie wants us to believe it actually helps the girl get into an Ivy League college. If only America really worked that way. Even beyond that, though, the subcurrent of "Spanglish" is that newcomers to this country should assimilate into this great melting pot only to a point -- in other words, they should retain what white liberals, in earlier, more innocent times, might have called "ethnic flavor," the kind of thing that has brought us Americans such greatest hits as silver jewelry from Mexico, tribal masks from Africa and saris from India.

We may not use that exact language anymore, but "Spanglish" suggests that that kind of thinking is still pervasive, while "Harold & Kumar" calls for us -- without doing anything so obvious as calling -- to get beyond it. Who are our neighbors, and where do they (or their parents) come from? How does that make them different from us? But also, particularly in terms of what they want for their own children, does it make us the same? "Harold & Kumar" is a reminder that our great land is made up of people from many nations, and a few of them are quite stoned. Let he who is without sin light the first joint.