A Mac for the masses

Cheap, small and beautiful: The Mac Mini that premiered this week at Macworld is a computer for the cost-conscious techno-aesthete. 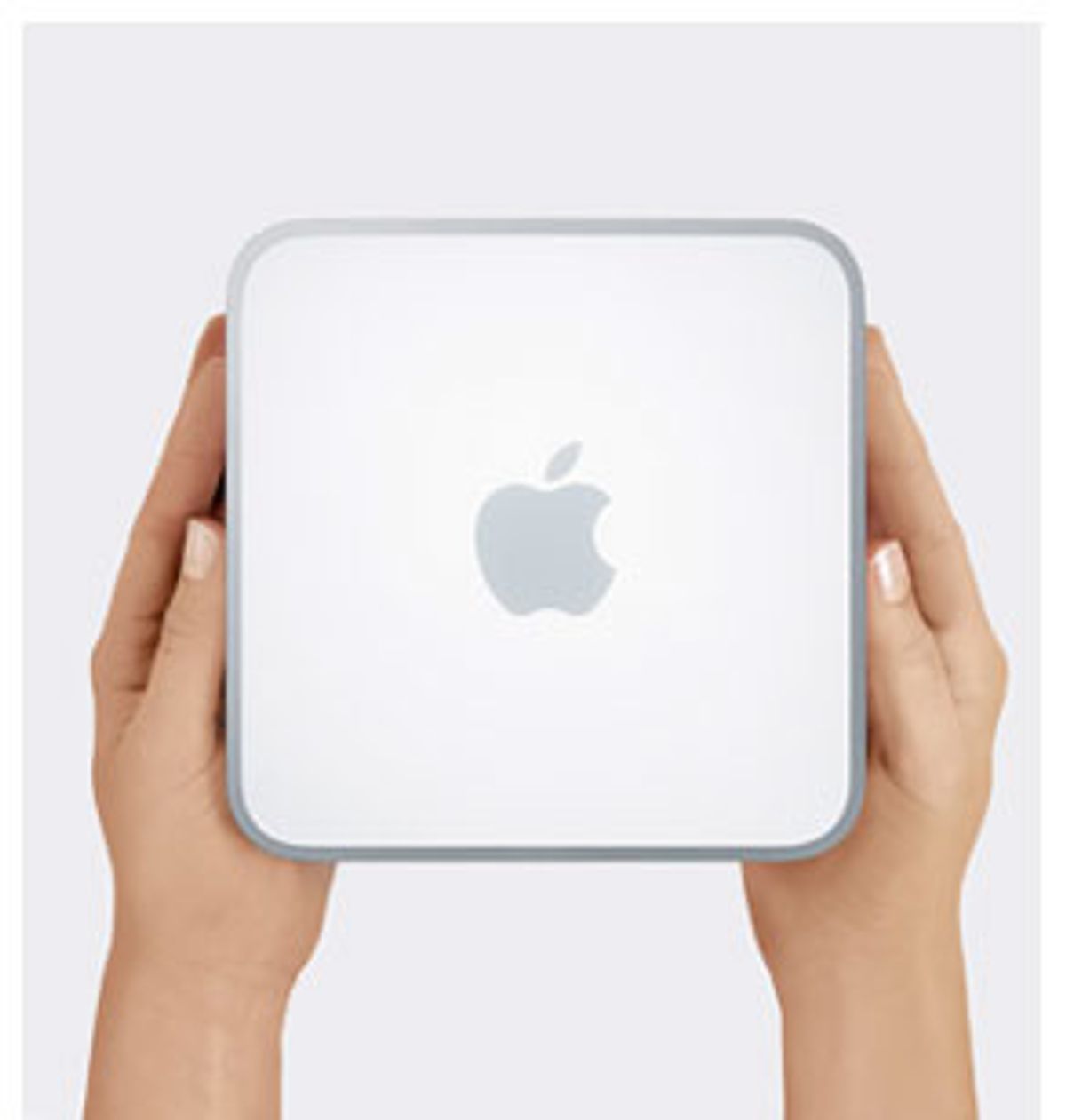 I've seen Steve Jobs, Apple's CEO, make the case for his sublime Mac computers a half-dozen times or more, and every time, I've come out of his polished presentations promising myself that I'm going to leave the land of Windows and switch over, cold turkey, to a nice, clean, great-looking Apple machine.

I remember taking the Apple vow when Jobs unveiled the white-plastic iBook a few years ago, and also in 2002, when I first saw the cute, lamp-shaped iMac. "This time, I'm just going to do it," my heart would say. "I deserve it." Then my brain would kick in. You want me to pay $1,500 for a notebook with as much power as a Windows machine two-thirds its price? I may appreciate the look-and-feel of Apple's system, but not enough to spend $1,300 on essentially the same desktop Dell's giving away for $500.

Today, though, after another one of Jobs' starry presentations at Macworld, I may really do it. That's because this time, Jobs brought forth a new kind of Mac -- a machine that comes with every feature of the Macs of yesteryear, except one: sticker shock. Like all Macs, the new Mac Mini, which is priced at $500, tugs at your heart. But the best thing about it is it won't offend your brain.

Mac enthusiasts -- like the thousands who've flocked to downtown San Francisco this week -- hate people like me, folks who put their pocketbooks ahead of their emotions. To them, it's clear that in just about any way you'd want to take the measure of a machine, the Mac beats every other computer there is. Its operating system is friendlier, more powerful and less vulnerable to security threats than Windows (or, really, Linux). People used to caution their friends against buying Macs because third-party companies didn't make much hardware or software to work with them, but these days everything works with a Mac, and some things -- like your iPod and your digital camera -- work better with Apple. And, obviously, the Mac looks better -- far better -- than a Dell. Other than the annoying one-button mouse thing, there's really nothing not to love about the Mac, and every time people give the machine a shot, they swoon. Not long ago Walt Mossberg, the influential tech columnist for the Wall Street Journal, tried out the iMac G5, the all-in-one machine that Apple released last year. He called it "the most elegant desktop computer I've ever used, a computer that is not only uncommonly beautiful but fast and powerful, virus-free and surprisingly affordable."

But "surprisingly affordable" isn't the same things as "a great deal," and compared to Windows PCs on the market, the iMac G5 was overpriced by at least $400. And $400 is a lot of money. You can, for instance, go out and buy an iPod with that much cash, which is what it seems many people did during the holidays. Jobs says Apple sold 4.5 million iPods in the past few months -- that's more than a 500 percent increase in iPod sales over last holiday season. Last year, the iPod had less than a third of the market for all portable music players; now it has a 65 percent market share (an incredible thing if you consider that a half-dozen iPod rivals were released in 2004).

Jobs also said that the iMac G5 did well last year; it's now the company's most popular Mac. But that's not saying so much, because the truth is -- and here's where the Mac fanatics press Send on their hate mail -- nobody buys Macs. Sure, if you live in San Francisco or New York, you've probably seen a Mac or two around (maybe that time you went to the Apple shop to buy your iPod). You may have used a Mac in school. Perhaps you even know someone who owns a Mac. But as wonderful and storied as it is, the Mac is just about irrelevant today. Apple has a minuscule 3.5 percent share of the American computer business. And worse than that, the Mac could be losing its place at Apple, too: If iPod sales continue to rocket as they are, where do you suppose Apple will commit its future R&D resources? (The answer may already be clear: The biggest announcement at today's Macworld was not the Mac Mini but instead yet another new iPod, this one a tiny, 512 MB model that starts at $99. Called the iPod Shuffle, the entry-level player lacks an LCD display and is meant to play songs in random-play mode.)

All of this is by way of saying that the Mac Mini may be the thing to save the Mac from forever languishing in obscurity, or at least to save it from the wrath of iPod. The computer is, for starters, beautiful. But it's not beautiful in the same way that other Macs are beautiful, for it doesn't include many of the components we all associate with Macs -- a well-designed flat-panel screen, an elegant keyboard and that vexing one-button mouse. The Mac Mini is, as Jobs described it, "BYODKM" -- "bring your own display, keyboard, and mouse." What's beautiful about this machine is its simplicity: The computer is just a small, shiny box. Let me put that another way: It's an incredibly small shiny box, measuring just 2 inches high and 6.5 inches square. There are Tom Wolfe novels that take up more desk space than this machine.

For $500, you get a G4 processor, a 40 GB hard drive and a DVD/CD-RW drive (there's a $600 model with a faster processor and a bigger drive). This is still not cheap compared to a Windows machine, especially if you consider the added cost of the monitor. But as Jobs pointed out, many of us already have a monitor, keyboard and mouse at home -- they're connected to our Windows computers. Think about this: For $500, a little more than you spent on that iPod you love, you can trade every hassle, every worry, every headache that Windows has ever caused you for a graceful, elegant Mac, a machine so small that you can ferry it around with you from the office to the apartment, or bedroom to bedroom.

"People thinking of switching" to Macs, Jobs said, "will have no more excuses." This seems about right. And once people have switched, there's probably no going back -- and that's why this machine could be a great thing for Apple.

The company knows how great its products are. Sales of its iPod are a testament to the public's appreciation for Apple's engineering. But the masses need something more than elegance; they need a good deal, they need to feel like they aren't getting fleeced by a fast-talking showman. They need to feel comfortable enough to take a leap of faith on Apple. $500 is a very comfortable number.