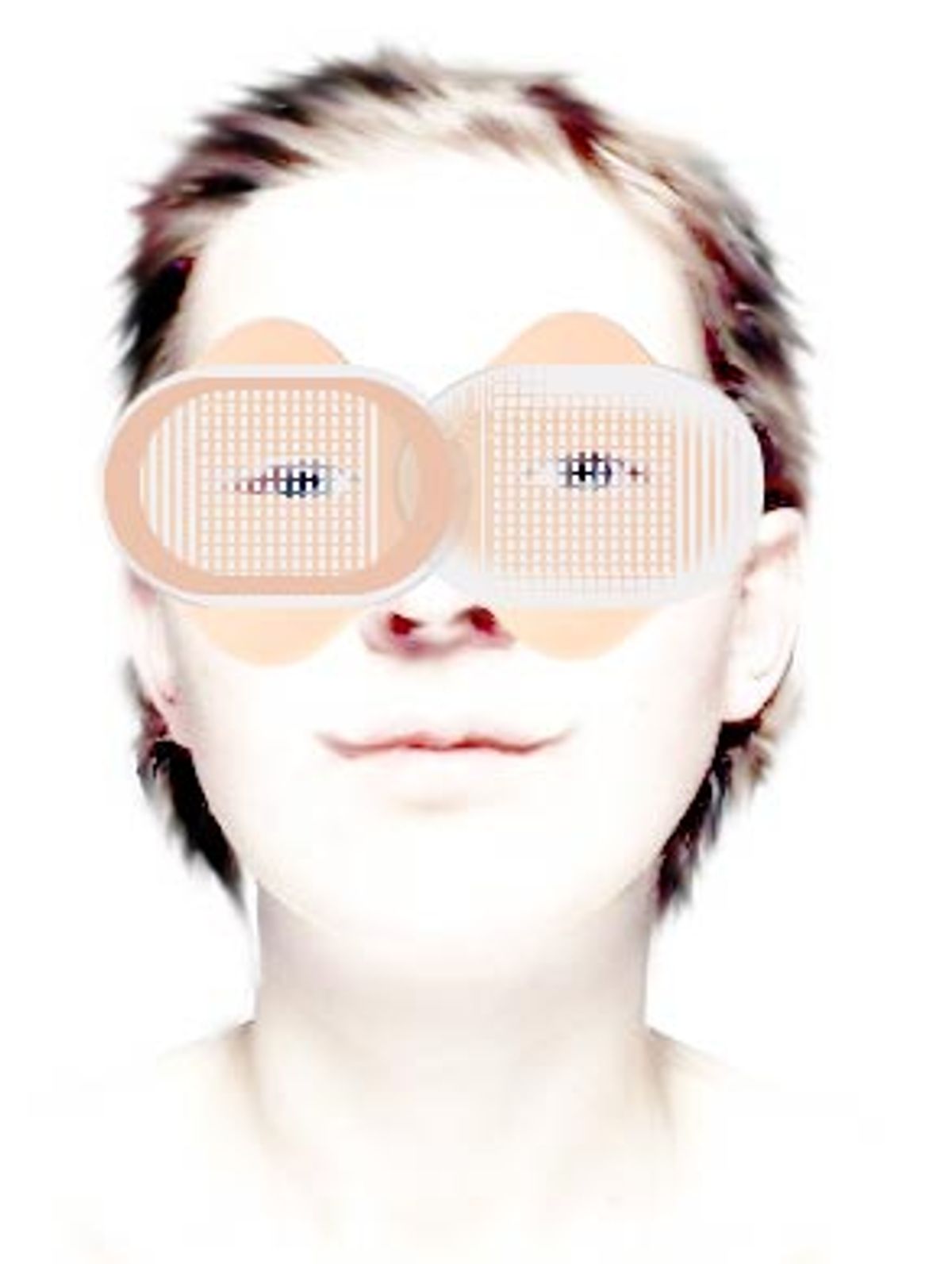 I have seen the future of our species and it is ... a patch. Specifically, a gigantic, skin-toned, custom-fitted patch -- part body bag, part Band-Aid -- that covers every square centimeter of our skin. Coating us mummylike, the Great Patch secretes various salves and solutions concocted to cure the great disease of being a living, breathing human. Smoking, birth control, depression, drug addiction, infertility, self-esteem issues, poor eyesight, acne, gastrointestinal troubles, acute anxiety, mild anxiety, anxiety about the potential of anxiety, sore throats, binge eating, binge dieting, claustrophobia, xenophobia, agoraphobia, annoying in-laws, an itch in the middle of your back that you can't quite reach -- you name it and the Patch will go to work, solving, dissolving, perpetually curing. And when Patch scholars look back (through the teeny eyeholes in their Patches), trying to pinpoint when exactly we became a Patch nation, they will look to today, to our present society, as the tipping point, the time when the great shift began.

A few years ago there was only the nicotine patch for smokers trying to quit, a goofy little temporary tattoo that spiked your blood flow with a hit of nicotine to get you through the day tremor-free. Remember that? You kept it there for a bit as you kicked cigarettes, then you kicked the patch as well, because the patch was supposed to be temporary. The patch was necessary, sure; but ultimately it was the silly part, the part that ripped a few of your arm hairs out of their poor follicles, the part you wanted to forget as soon as possible. And yet ... as it happened, this was the early onset of national patch fever, the moment when drug companies and dubious holistic businesses alike became consumed, mad scientist-like, by a vision: What if we could design a patch for ... [cue diabolic laughter] ... everything!

Now we have patches for birth control, for hormone replacement, for run-of-the-mill fevers. The other day I received an e-mail touting the new Sober X Hangover-Free Topical Patch, which allegedly nullifies a night of heavy drinking. In the wake of our cultural obsession with the Atkins diet, we've been introduced to a variety of patches, none of them FDA approved, purporting to help one lose weight by infusing one's blood flow with various shady, often "herbal" metabolism boosters like sea kelp, bladderwrack and Brazilian coco. There's the Diet Patch Original, the Natural Patch and the Slim Form Patch, which was the subject of a CBS News report, and boasts a Web site featuring a headless woman's taut, sand-covered, bikini-clad bottom, which is either an example of the ass the patch can give you "transdermally," or a way of saying that, hey, the thing is so discreet you can hide it in a skimpy bathing suit! I don't know. I don't want to know.

Most recently, of course, there was a controversy surrounding the female sex drive patch, Intrinsa, which was designed by Procter & Gamble and Watson Pharmaceuticals to boost libido in women whose ovaries have been removed or who've been tormented by menopause. Last month, Intrinsa was unanimously rejected by an FDA advisory panel, which, in the wake of approving some drugs that turned out to have nasty long-term side effects -- see Vioxx -- stated that more research was needed to ensure patch-using women wouldn't end up having early strokes or getting breast cancer. That this was a drug that fell across gender lines -- the first "female Viagra," as it was awkwardly referred to in the press -- made the FDA's decision all the more closely watched, and while it undoubtedly upset many it pointed to something bordering on refreshing: Like the birth control patch, Intrinsa is that rare incarnation of transdermal technology developed to aid something serious, something legitimate, with actual medicine.

It's the others, the onslaught of questionable patches that, well, I just don't get. Presumably, the benefits of a patch are A) that you don't have to think about it very often and B) it's very discreet, a slim sepia step above invisible. As someone who often forgets to eat, I can't contest the merits of the first point, but the second strikes me as misguidedly optimistic, or at the very least designed for humans who don't do what many humans enjoy doing -- namely, taking clothes off and colliding and hoping to forget all the things, big and small, that plague us on a daily basis.

Imagine: Two people are out on a date, their third date, say, and things are going quite well. They end up going home together. Kissing takes place. Hands grope bodies, clothes come off and are thrown to the floor; a few garments end up in the kitchen sink, because it's just that sort of night. She wants the lights off. He wants them on. Or maybe it's the other way around -- doesn't matter. The point is that now ... suddenly ... both are confronted with bare backs and bellies covered in patches, patches, patches galore! What in hell? The mind reels. Does this (he thinks) mean I don't need to use a condom, or is she some closeted quasi-anorexic diet-obsessive? Does he (she thinks) always get this drunk or is he some closeted emo-boy diet-obsessive? What's wrong with her? What's his deal? Am I gonna get something I don't want?

The great clichéd fear is that the person you're dating will one day peek into your medicine cabinet and discover the sorry truths about you, that you are not perfect, that, in fact, you're coming apart at the seams. Patches eliminate the need for nosiness; literally glued to the largest organ in our body, they turn us into mini-billboards, broadcasting our ailments and vulnerabilities. This is odd, yes. It's also somewhat touching. "Here I am," our patch-covered bodies announce. "I'm not perfect but please take me. I, too, am scared, and am trying to remain alive in this godforsaken world. Oh, and do you think I'm fat? Maybe even just a little?" Everything we do -- the clothes we wear, the ephemera we reference in conversation, the amount we drink -- is geared around the desire to suppress these truths, to bury them, to pretend they don't exist; now we've got a "medical" trend that does precisely the opposite. What's going on here? Could it be that the preponderance of patches is more than the work of queasy marketing gurus? That this is our sly declaration that we want to break out of society's shackles? That we want to revel in our imperfections? That we are willing to look like complete fools with strange things stuck to our bodies in order to do so?

It's a nice thought. Very romantic. It's also, I'll be the first to admit, utter nonsense. The great irony about our present world is that, despite uncountable medical advances that have made us an unquestionably healthier species, we have never been more obsessed with the potential for pseudo-sickness. We live in the age where people wash down vitamins with Vitamin Water, and then slap on a vitamin C/wrinkle-eliminating patch, just in case. Anyone with two working brain cells knows in their heart that these patches, for the most part, are bogus, designed to feed on our fear that our bodies are constantly threatening to give out, to combust completely. (The Web site DietFraud.com lists the many diet patches that have been deemed shams.) And yet we choose to suspend our disbelief, and look the other way, even if we look like weirdos in the process.

And so mark my words: One day soon there will be a patch for patch addiction, and that'll be it, the beginning of the end, the moment we were one step away from the full body patch. Go ahead and laugh. Just remember: You heard it here first.