Zap! Pow! Kerplunk! This flick starring Jennifer Garner as a comic-book assassin-heroine is hardly a killer. 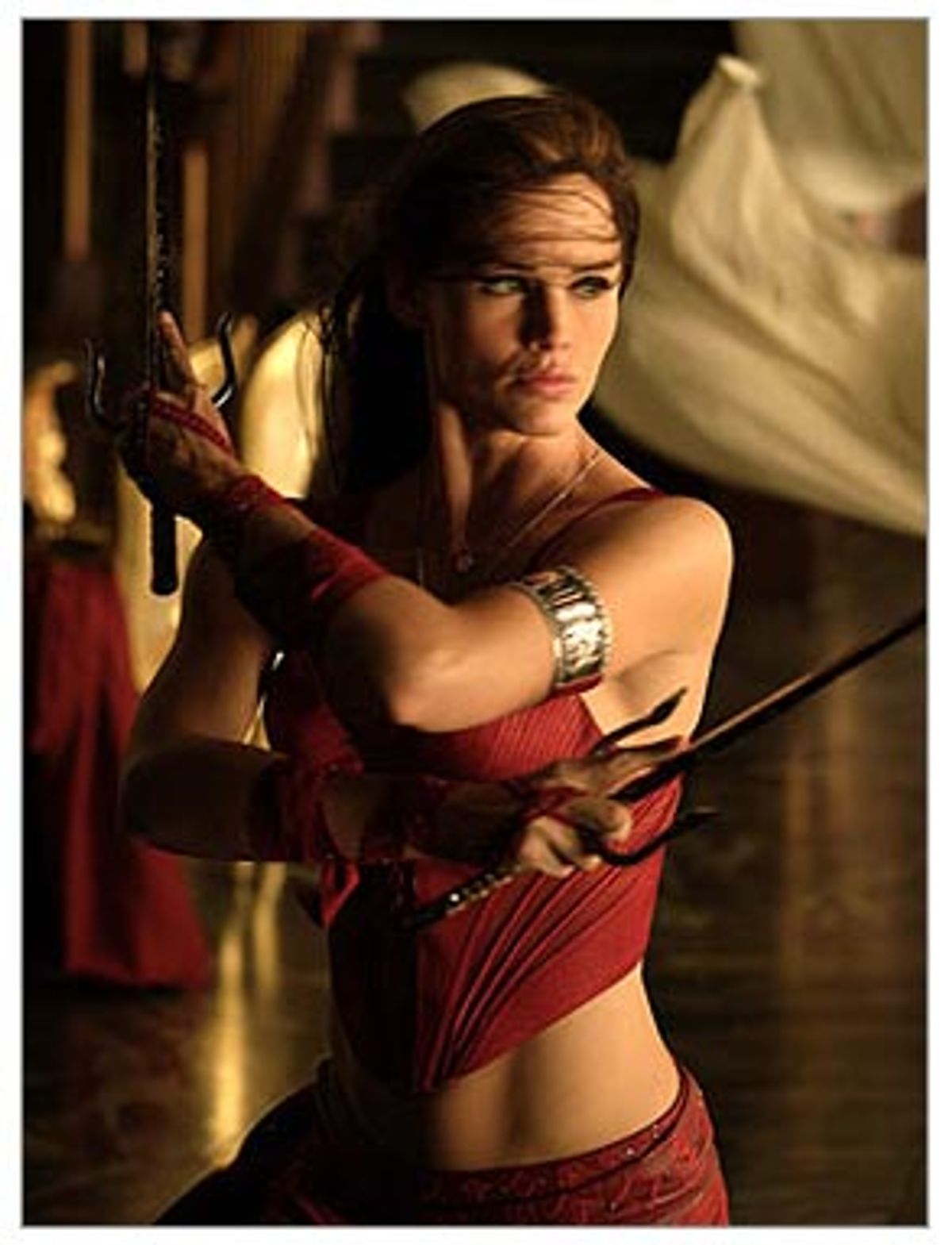 A couple of nifty images and physical action that's filmed with clarity raise hopes -- in the opening sequence, at least -- that "Elektra" might be a distraction from the January doldrums. Our first glimpse of the assassin-heroine is a rustle of red and black cloth atop a roof in a snowstorm. When she enters the lair of the target she's stalking, we see her as he does, reflected from head to toe in a glass of scotch he's holding up to the firelight. There's an emphasis in the opening on Elektra as a whispery presence. Jennifer Garner doesn't so much sneak into her target's fortress as materialize inside it. It makes a nice break from the bombast of most action movies.

There are a couple of neat images later on, too: a deadly Sapphic kiss between Elektra and a villain whose touch causes the living to wither and die (the kiss takes place in a forest as green leaves fall off trees and create a shower of black around them); and an eagle tattoo that comes to life, leaving its bearer's chest.

The sad thing about "Elektra," though, is that it reveals that for all the millions of dollars now spent on them, comic-book movies are being made with no more distinction than the cheapest old Saturday-afternoon serials. When studios weren't sure whether comic-book movies would make money, some care was actually taken to make the presentation something special. That's how we got Tim Burton's two "Batman" movies. Now you see that type of care only intermittently, in the first "X-Men" movie and, despite their problems, in that movie's sequel and the first and second "Spider-Man" films.

"Elektra" is more and more what comic-book fans, and moviegoers in general, are being fobbed off with. Elektra, a martial-arts-trained assassin, was created by Frank Miller while he was working on the "Daredevil" comic book (Garner also played the character in the 2003 "Daredevil" movie) and brought back to life for the comic series "Elektra Assassin."

What exists of a plot here makes fleeting reference to Elektra's resurrection at the hands of her old martial-arts master (played by Terence Stamp, who, even in tripe like this, holds his status as one of the three or four most elegant men ever to step in front of a movie camera). And there's some Freudian mumbo jumbo about Elektra's having lost her mother at an early age and coming to develop a relationship with a young girl who shows the same abilities she did.

What's missing -- apart, of course, from a plot -- is any character development. The movie doesn't make it clear or plausible why Elektra decided to use her gifts to become a paid assassin. And when she finds that her next target is that sympatico young girl and the girl's father (the winning Goran Visnjic, not fully awake here), we haven't, at that point, been made to feel the connection that compels her to become the teen's protector. Nor do we much care about the young prodigy, since the actor playing her, Kirsten Prout, is an unappealing kid whose affect is somewhere between goody-goody and bratty.

Garner's role is so underwritten that she has little to do in the nonfighting scenes but brood. It's impossible not to start thinking of Sydney Bristow in "Alias," not because of any limitation on Garner's part but because the writers of that show always give us enough information to know what's going on in Sydney's mind when she's in one of her black moods. In the fighting scenes here, as badly and chaotically directed by Rob Bowman as the action scenes in "Alias" are clear and clean, Elektra might just be another one of Sydney's disguises -- albeit one that manages, through the clumsiness of the filmmaking, to be both cheesy and humorless.

In the past, comic-book fans have raised a ruckus whenever they felt one of their beloved icons was getting shortchanged in its translation to the screen. Sometimes unfairly -- they bitched about Michael Keaton in "Batman" before even seeing his performance (which was brilliant), and Keanu Reeves seems to be getting the same treatment for the upcoming "Constantine" solely because he's not British. Maybe studios just ignore comics fans now, figuring they will always have complaints. Or maybe comics fans have seen so many lousy film adaptations (especially of Marvel characters) that they just feel beaten down. It's about time, though, for them to start raising some serious chat-room hell about the shoddy movies being marketed to them. If the studios are going to go to the trouble and expense of bringing those flat panels to life, would a little craft and imagination be too much to ask of them?