The attorney general nominee claims he and then Texas Gov. Bush held "rolling" discussions before executions were approved. He's almost certainly not telling the truth. 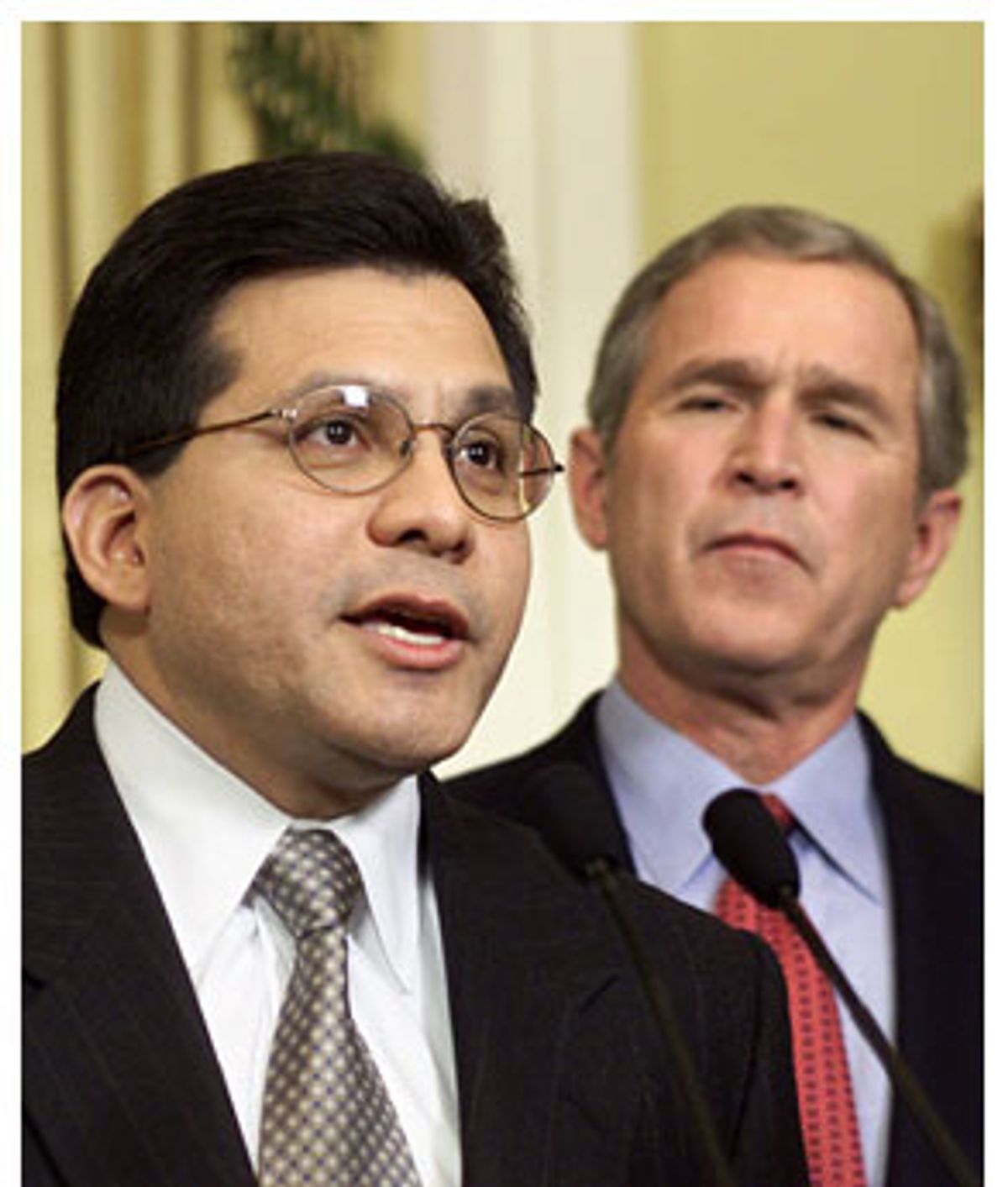 In seven hours of testimony before the Senate Judiciary Committee last week, Alberto Gonzales demonstrated astute powers of evasion, obfuscation and equivocation when it came to the Bush administration's torture policy, leading one Democratic senator, Joseph Biden of Delaware, to ever so gently suggest that the attorney general nominee might be less than totally forthcoming. "So we're looking for candor, ol' buddy. We're looking for you when we ask you questions to give us an answer, which you haven't done yet. I love you, but you're not very candid so far."

In the end, few senators wanted to sully the Gonzales love-in just because the sworn testimony of the soon-to-be rubber-stamped head of the nation's chief law enforcement agency was not entirely responsive. But if Gonzales was lacking in candor on the subject of torture, the main thrust of the hearing, he almost certainly crossed the line from half-truth to untruth when it came to a discussion of his role in the execution of 57 Texas death row inmates.

In response to questions from Democratic Sen. Russell Feingold and Judiciary Committee chairman Arlen Specter, Gonzales repeatedly stated that each of the so-called execution memos he wrote for then Texas Gov. George W. Bush was nothing more than a "summary" of what he suggested had been an elaborate, ongoing review process for each and every execution Bush approved. "It was not unusual -- in fact, it was quite common that I would have numerous discussions with the governor well in advance of a scheduled execution," Gonzales told Feingold. "There would be a rolling series of discussions in connection with every execution."

This explanation of how executions were reviewed is essential to Gonzales' defense of his record because the documentary evidence is so damning. What it shows is that the only reports Bush reviewed were Gonzales' three-to-seven-page summaries, which not only were heavily biased against clemency but repeatedly failed to make any mention of the most powerful claims on a defendant's behalf, including plausible claims of innocence. Rather than writing a balanced summation of arguments for and against commutation, Gonzales' work product was frequently little more than a brief for execution.

Because the written summaries were so thoroughly unprofessional, Gonzales no doubt felt he had to downplay their significance in his Senate testimony. He did this by suggesting that the summaries were invariably preceded by a real meat-and-potatoes review -- in-depth, scrupulous and balanced discussions of the evidence. Yet senators never asked Gonzales to substantiate this claim, which is unfortunate because Gonzales would have been hard-pressed to do so.

In fact, in virtually all 57 cases for which Gonzales and his staff prepared written execution summaries (Bush signed off on 152 executions in all), there is no record of any additional work having been done for the governor.

Gonzales wants senators and the rest of us to believe that in the 57 cases he chaperoned to the executioner, the most important and substantive work was done in ad hoc conversations, with no scheduled meetings and with nothing beyond his brief and one-sided memoranda committed to paper.

But when did all these conversations about executions take place? Bush's appointment logs typically show one, and only one, 30-minute meeting per execution. And that meeting almost always took place on the day of the execution itself, leaving Gonzales little time to explore any issues or questions about an impending execution Bush might have raised. It was at those meetings that Gonzales presented his appallingly incomplete summaries of the cases.

Gonzales told Feingold that if he "expressed concerns or questions" about an execution, "the governor would direct me to go back and find out and to be absolutely sure." Yet in not one instance did Gonzales actually write a memo or report for the governor following up, elaborating on or clarifying these life-or-death questions that both he and the governor claimed to take so seriously. Indeed, Gonzales wants senators to believe that these purported discussions, of which there is no record, were so thorough that by the time execution day rolled around and he presented his truncated written summary to Bush, there was no need to include in that document the most salient facts about a case -- hence the persistent omissions.

In his testimony, Gonzales could barely recall details of the notorious Carl Johnson sleeping-lawyer case or the Henry Lee Lucas serial murderer case, one of the most infamous death penalty matters to come before Bush, and one of only two Bush writes about in his autobiography. Yet Gonzales wants us to believe that he was able to keep the critical facts and details of the 57 cases he handled clear in his own mind and convey the crucial arguments in each to Bush without committing a single word -- beyond the eleventh-hour summaries -- to paper.

The written record on executions under Bush is both vast and meticulously cataloged by the Texas State Library and Archives Commission, and it suggests just how implausible this claim really is. Records provided by the archives make it shockingly clear that in not one case did Gonzales send Bush a clemency petition, the one document that would have laid out the most forceful argument on behalf of an individual condemned to death. We also know from the archives' own review of the files left behind by Gonzales and his staff that for nearly every inmate executed under Bush, there was voluminous correspondence that never made it to Bush's desk -- correspondence from the Board of Pardons and Paroles, district attorneys, local law enforcement officials, inmates, attorneys for the condemned, and family and friends of victims. "The letters are generally addressed to either the Governor or his General Counsel," a report prepared by the archives state, noting that "while many of the letters are directed to the Governor, they are stamped as received at the General Counsel's office and there is no indication that the Governor reviewed them" (emphasis added).

The archives leave no doubt whatsoever that Gonzales could have provided Bush far more detailed information about each of these executions, but instead chose not to. In the end, Bush made his decisions on each of these life-or-death cases by relying almost entirely on the summaries Gonzales himself now dismisses, acknowledging that they were, at best, incomplete. "What the Governor did review are the execution summaries prepared by the General Counsel," the archives state in an analysis accompanying its "Inventory of the General Counsel's Execution Files." The archives found no other documents that had been reviewed by Bush.

Astonishingly, the archives also make clear that far more complete execution summaries than those prepared by Gonzales were in his possession but were never presented to Bush. These confidential summaries, which have not been made public, were prepared by the Board of Pardons and Paroles or the Texas Department of Criminal Justice. "There is a difference between the execution summaries prepared by the governor's general counsel [Gonzales] and those done by or for the BPP," the archivist states. "The summaries by the BPP contain more information about the crime, the criminal history and the defendant's prison record than do those prepared by the governor's general counsel. Additionally, execution summaries prepared by TDCJ or BPP often contain attachments, including correspondence between the BPP and inmates with victims and inmates' families, correspondence to the BPP from its legal counsel, recommendations from trial officials, medical and psychological reports, and criminal histories."

These more complete summaries, the archives report, were sent to the governor's office along with affidavits, court records and clemency petitions -- none of which Gonzales saw fit to submit to Bush, in all likelihood because Gonzales knew his boss would not be interested in them and had no desire to commute the sentences of anyone on death row.

During the period that Gonzales was handling clemency matters for Bush, there were sometimes as many as two executions per week, as many as eight in a single month. And Bush's top legal advisor would have us believe that the way he and Bush kept track of these executions and ensured that no innocent person died -- and that all of the condemned had had a full and fair review in the courts -- was through a series of informal discussions. That's just not believable.