The real Golden Globes contest: Joan and Melissa vs. Star and Kathy. 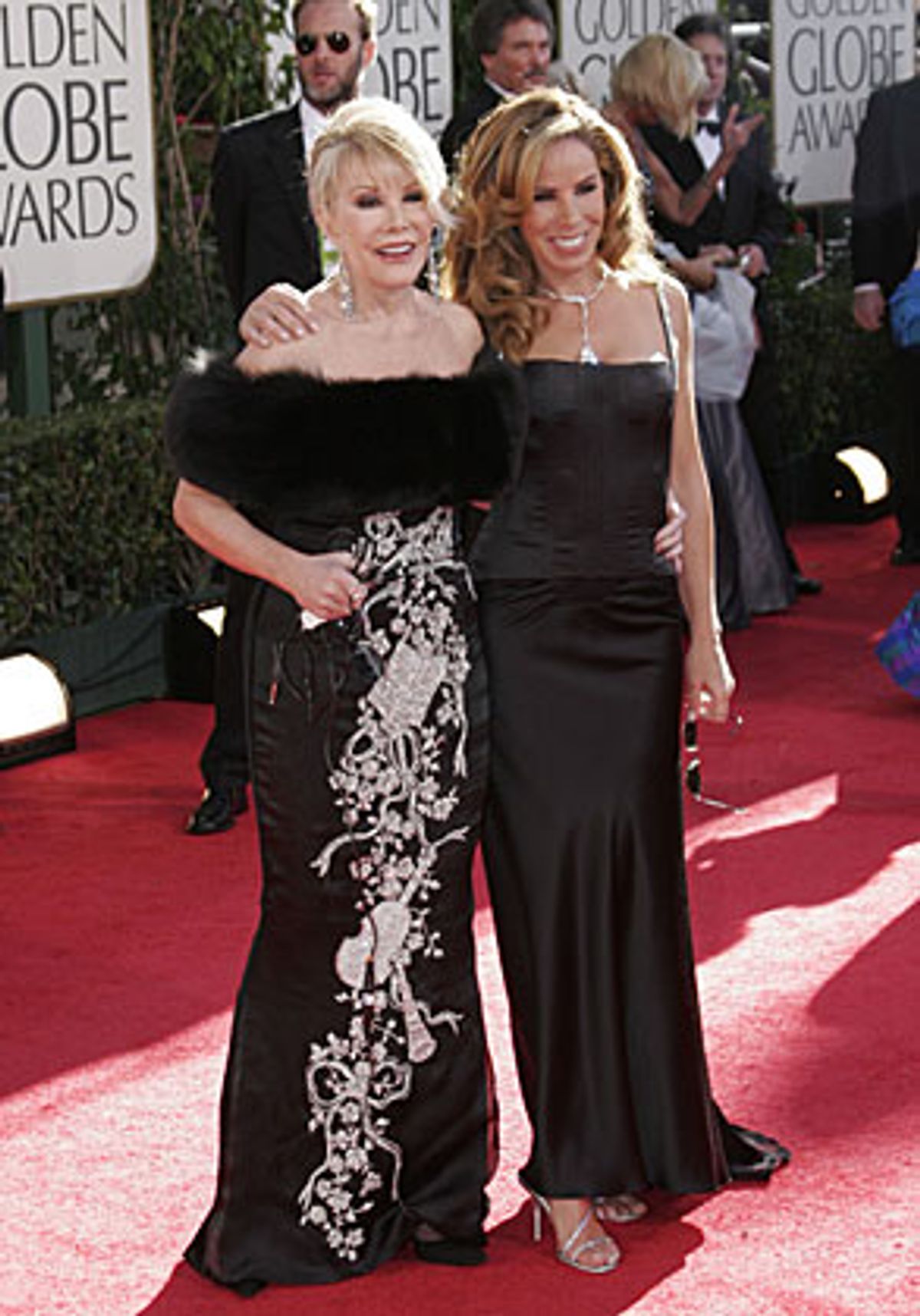 Order was restored to the universe last night, thanks to the return of Joan and Melissa Rivers to the red carpet for The Golden Globes. E! unceremoniously replaced them at the Emmy pre-broadcast last year with a self-involved Star Jones after the catty duo announced plans to migrate to the TV Guide Channel for an estimated $7 million. Last night, the most frightening mother-daughter team in the world -- more frightening than the Judds, more bone-chilling than Goldie Hawn and Kate Hudson giggling simultaneously -- returned to their spots on the red carpet, coifed, powdered and bejeweled within an inch of their lives, for a face-off with the E! team's Star and comedienne Kathy Griffin.

Wouldn't it be nice if the E! team could bum-rush Joan and Melissa with a mic as they arrived? "Joan, the face -- who are you wearing? Is that the work of Dr. Frederick Rubin, plastic surgeon to the stars? Is this for your upcoming role in 'The Lion King II?'" "Melissa, is that a mud-flap on your chest? Do you really think it was a good idea to have your face custom-made to look like Joan's?"

But Star and Kathy didn't need a full-frontal assault, because the Riverses are the Jay Lenos of the red carpet: flat-out bad at what they do, yet still inexplicably employed. The real appeal of watching Joan Rivers used to be that she would whisper mean things about the celebrities and their outfits between empty servings of chatter. Sure, she could be mean. But didn't we all savor a dark side to an otherwise fluffy exercise in self-congratulatory preening and prancing?

Sadly, though, Joan has lost her bite. Thanks to the fact that so many celebrities these days get professionals to tell them what to wear, there are far fewer fashion faux-pas than there once were. Now Joan is left with nothing but her shoddy interview skills, somehow making simple small talk look painfully difficult. (Joan to Glenn Close: "Are you a good memorizer?") Meanwhile, her daughter's mere tone of voice and empty questions seem to make celebrities visibly agitated.

As irritating as Star Jones can be at times, she makes Joan and Melissa look about as charming as a sack of yams. Recognizing that these are humans who only relax when they're being bathed in a steady shower of admiring words, Star flatters relentlessly. And, strangely enough, she actually sounds sincere all the while.

(To Eva Longoria) "Tell me about your dress, because you are trying to give it to 'em, Miss Ma'am."

(To Minnie Driver) "Everybody needs to know: This is what I mean when I say Glamazon. Amazons used to rule the world, now the Glamazons do. Baby, you are servin' it up. Tell me about the dress."

(To Laura Linney) "You do it so well, and all the while looking as fabulous as you do! You deserve to get that best actress nomination every time you do, you know why? 'Cause you give us good work each and every time."

(To Portia de Rossi) "May I just tell you that this may be one of the most glorious gowns I've seen all night. It is made exactly for you, and Mr. Valentino knows how to give you just a little drama."

(To Cate Blanchett) "Jean-Paul Gaultier? I tell you what, you do him justice just like you do Kate Hepburn."

But Star's smoothest moves are her "Back to you, Bob" moments with Kathy Griffin. While Joan and Melissa shout at each other like angry... well, blood relatives, Star uses these baton-passing challenges to bask in the glory of the special, private moment she just had with a celebrity -- and to rub Griffin's nose in it ever so slightly.

Star: "Kathy, I just had a very good moment. What are you doing?"

Star: "Kathy I just spent some time with Ewan McGregor, that is going to be Mr. Star Wars, girl. Who do you have?"

The second question is delivered in a terse, almost an accusatory way, like, "I'm making magic, girl. What the hell are you up to?"

Cut to Kathy Griffin, whose scratchy muppet voice can put you off in about two seconds flat. Her hair looks like a stick shift. She tosses out non sequiturs with reckless abandon, but her delivery is too shticky and not nearly deadpan enough to take the pressure off her and put it on the celebrities.

This disastrous corker-spewing muppet act is in full effect when she interviews Michael Chiklis of "The Shield": "Have you guys ever gotten a hooker at this hotel?" she chirps at a flabbergasted Chiklis and his wife. The moment falls flat. Come on, lady. Take the manic-girl act down a notch, deadpan the question, and put the onus on Chiklis to play off your straight-man set-up.

Next, Kathy says to Oliver Platt, "Can you believe that the Bachelorette is here?" OK, that's pretty funny.

Then to Clive Owen: "Your ears are beautiful. Are they real?" Owen jumps on board immediately. "What?" he asks. "I didn't catch that."

Then, to Kerry Washington and her husband David Moscow, Kathy asks, "Do you guys have any weed?"

Moscow specifies, "On us at the moment? No."

The battle is over, and Star and Kathy win it in a knockout. In fact, the E! team serves the purpose Joan used to serve -- Star dishes up the shameless pandering and flattery, and Kathy brings that little bit of unpredictability, that loose cannon effect that makes the whole night seem a wee bit more interesting than say, a press junket photo shoot.

Indeed, by the time the red carpet parade is almost over, Melissa already seems to be admitting defeat. Quizzing Marcia Cross on the upcoming episodes of "Desperate Housewives," she asks, "Can you give us any hint of what we can expect from you on the show?" When Cross hesitates, Melissa reassures her by muttering, "It's TV Guide, nobody watches it."