The song remains the same

Any vague hope that a second Bush term will be different was crushed by Condoleezza Rice Tuesday. Yes, the U.S. will have a new secretary of state. It will not have a new foreign policy. 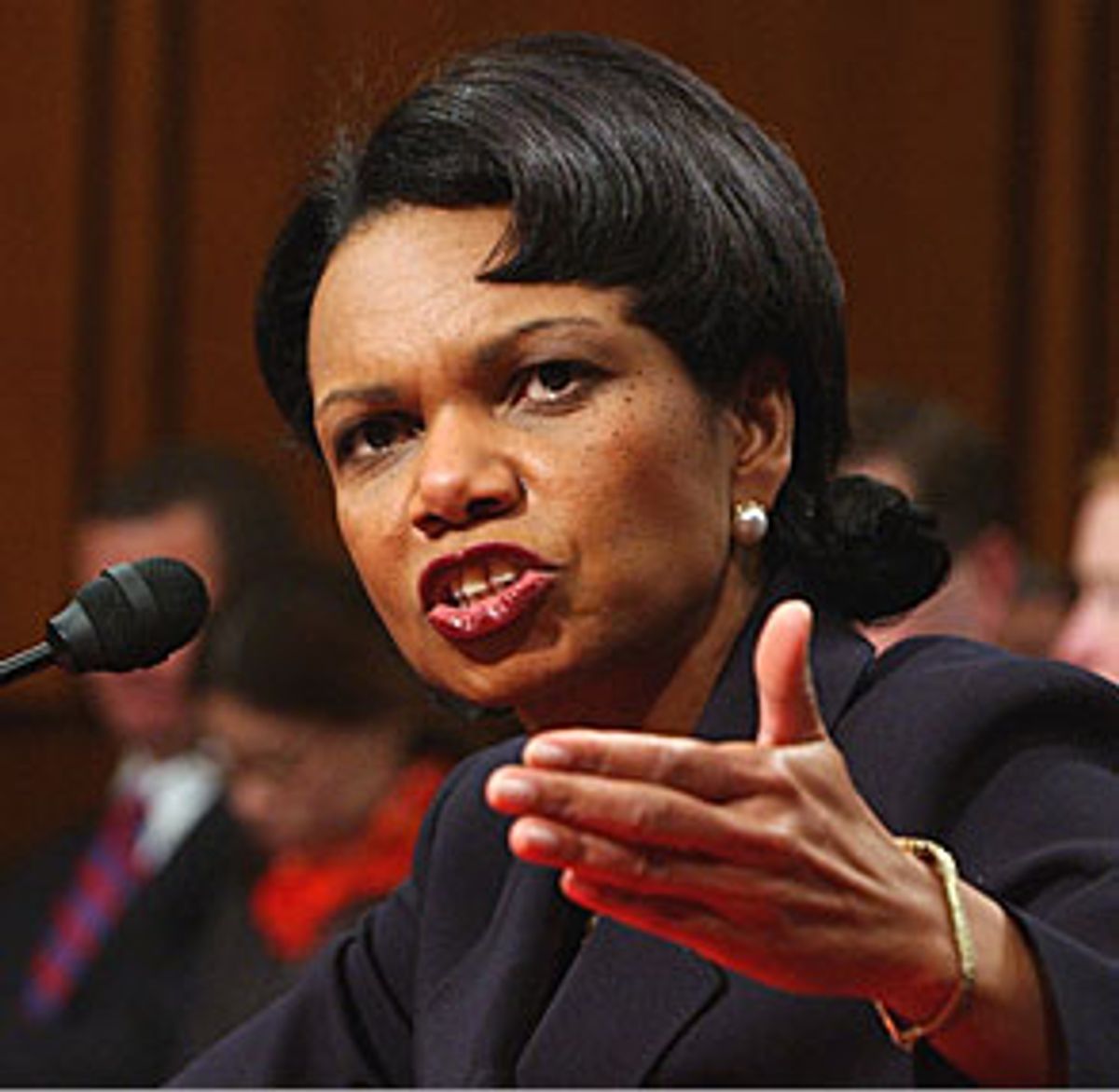 There's an artificial, Disneyland-in-reverse quality to Washington this week. There will be fireworks Wednesday and marching bands Thursday and big dress-up parties for men in tuxedos and ladies in their ball gowns. This E-ticket ride for the GOP will cost more than $40 million, at least some of it coming from funds the District of Columbia was supposed to use for homeland security. And when all is said and done -- when the honor guards and bagpipers and performing horses have all gone home, when the barricades have come down along Pennsylvania Avenue and the bar at the Ritz-Carlton is quiet again -- George W. Bush will still be the president of the United States.

Nothing changes at noon on Jan. 20, at least not this year. And if there was any lingering question about that -- any vague hope that the president's second term might be different than his first -- Condoleezza Rice put the matter to rest during her confirmation hearing before the Senate Foreign Relations Committee Tuesday. The United States will have a new secretary of state Thursday. It will not have a new foreign policy.

According to a new Washington Post poll, 58 percent of the American public disapproves of the way the administration is handling the war in Iraq. But Bush insisted last week that the American people ratified his war efforts when they reelected him in November, and Rice gave every indication Tuesday that the United States will stay its present course in Iraq during Bush's second term.

Rice insisted that "the strategic decision to overthrow Saddam Hussein was the right one," even as she acknowledged that some of the tactical decisions along the way "might not have been good." But if Rice believes that the United States has made mistakes in Iraq, it's hard to know what she thinks they are. Time and again, senators from both sides of the aisle raised questions about specific aspects of administration policy in Iraq. Again and again, Rice demurred. Troop levels? Rice said they were right all along. Torture at Abu Ghraib? Rice said the president doesn't condone it and never has. No WMD? Rice said it didn't really matter; the United States invaded Iraq to "defend freedom."

Rice refused to give a clear timetable for when U.S. troops might begin to come home, saying the key goal now is to train Iraqi security forces well enough to do more of the fighting themselves. But when pressed to describe the pace of that training, Rice had little to say. She repeatedly offered up the Bush administration's estimate that 120,000 Iraqi personnel are now "trained," but she refused to say whether "trained" forces were those who had undergone some minimal initial training or those who were actually able and willing to fight against the insurgents. When Sen. Joe Biden, the committee's ranking Democrat, said that he believed only 4,000 Iraqi security personnel were trained well enough to fight alongside U.S. troops, Rice simply repeated the administration's conclusion that 120,000 Iraqis were considered "trained."

Democrats on the committee were frustrated by Rice's inability -- or unwillingness -- to provide a more specific assessment, and they were not alone. Rep. Richard Lugar, the committee's chairman, asked Rice whether "it's not possible to devise some metric that is more satisfying." Describing the training of Iraqi troops as a "critical issue" on which the administration must be "upfront with the American people," Lugar suggested that Rice could "do better with the question" than she did Tuesday.

Lugar wasn't the only Republican to raise concerns. Republican Sens. Chuck Hagel and Lamar Alexander both pushed Rice, unsuccessfully, to articulate a clear exit strategy for Iraq. But it's clear that Rice will have the votes she needs to be confirmed when the Senate meets Thursday, and that many of them will come from the Democratic side of the aisle. Calif. Sen. Dianne Feinstein signaled her intention to vote for Rice Tuesday, when she introduced Rice to the Foreign Relations Committee with a glowing speech about the nominee's childhood and professional career. As many senators did, Feinstein noted that Rice has an unusually close relationship with Bush. That's an asset to the extent that other nations know that Rice speaks with Bush's voice. It's a liability to the extent that Rice is unlikely to offer the sort of independent assessment of foreign policy that Colin Powell once provided.

In what appeared to be a tacit admission of that liability, Feinstein deleted a passage from her prepared remarks, in which she quoted Rice as once telling students at Stanford: "If you find yourself in the company of people who agree with you, you're in the wrong company." Instead, Feinstein praised Rice for having the "skill, judgment and poise to lead in these difficult times." Ignoring Rice's role in Iraq planning and her dissembling performance before the 9/11 commission, Feinstein said that Americans can "rest easy" if Rice's "past performance is any indication."

But not all Democrats are quite as comfortable. Feinstein's colleague from California, Sen. Barbara Boxer, launched a sharp attack on Rice, taking her to task for calling the Indonesian tsunami a "wonderful opportunity" for the United States to show its compassion, and lashing into her for false or at least contradictory statements she made about weapons of mass destruction before and after the start of the Iraq war. "I personally believe," Boxer told Rice, "that your loyalty to the mission you were given, to sell this war, overwhelmed your respect for the truth."

Rice shot back with anger. "Senator," she said, "I have to say that I have never, ever lost respect for the truth in the service of anything. It is not my nature. It is not my character. And I would hope that we can have this conversation and discuss what happened before, and what went on before, and what I said without impugning my credibility or my integrity."

Just back from a fact-finding trip to Iraq, Massachusetts Sen. John Kerry questioned Rice extensively about the war effort but also about negotiations with North Korea and the proliferation of nuclear weapons. In a style familiar to anyone who saw him on the campaign trail, Kerry began the day by announcing that his questions for Rice were "several-fold." Nearly 10 hours later, long after most of the other committee members had left for TV appearances or inaugural parties, Kerry was still in his seat, pushing Rice to explain why the administration would choose to spend hundreds of billions of dollars for "weapons that weren't there" but only $1 billion a year to secure "real, ascertainable, tangible" nuclear weapons from the former Soviet Union.

As he engaged in what became a one-on-one debate with Rice, Kerry invoked -- often explicitly -- promises, arguments and comments made during the presidential race. Tuesday was his first day back on the Foreign Relations Committee after losing to Bush in November, and he said it was "sort of good to be back." It's not where he hoped to be two days before Inauguration Day, and Condoleezza Rice was not the nominee he would have chosen to be secretary of state.

Kerry's nominee might well have been Joe Biden, a man who seemed to understand all too well Tuesday that this week's activities -- the inauguration festivities and the confirmation hearings -- are more about ceremony than substance. As he prepared to question Rice, Biden said he had a message for European nations still smarting over Bush's reelection. It's one that applies back home, too. "Get over it! Get over it!" Biden said. "President Bush is going to be our president for the next four years."