Not playing with a full Beck

The much anticipated release from everyone's favorite fair-haired songwriter leaks -- briefly -- online, and we listen in. 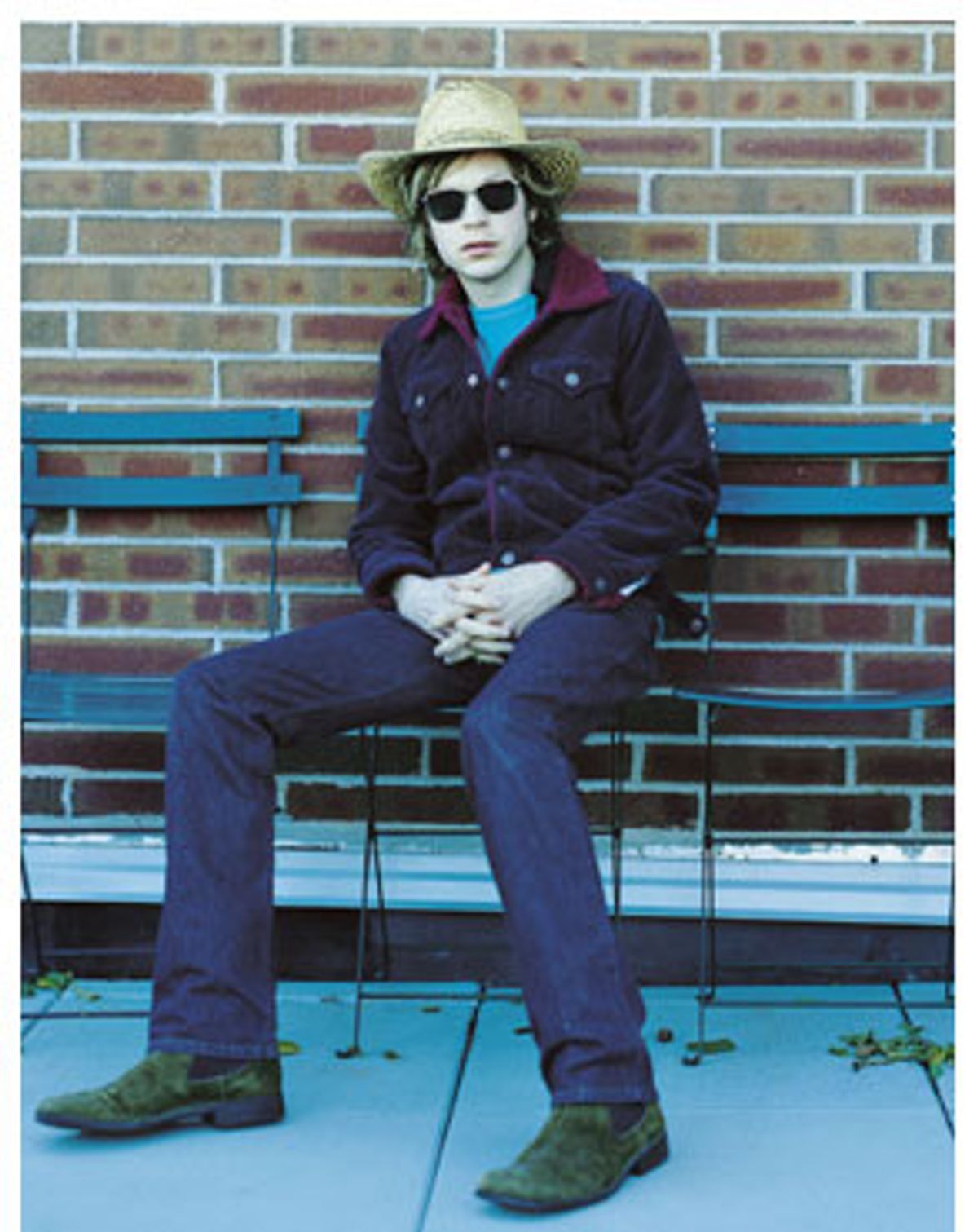 Those online during the wee hours of the sleepy Sunday evening before Martin Luther King Day received an unexpected treat when word spread that mysterious (and now disappeared) Nappy Cat Blog had abruptly leaked a complete disc's worth of tracks from the long rumored, still untitled Beck album (now named "Guero" -- slang for "fair-haired white boy" -- and slated for a March 29 release).

And -- golly! -- what nice, wholesome, welcome news for a change, Beck's wishes be darned (sorry, man!). Word fireworked out through the deep blue state of cyberspace (as Jeff Tweedy pegged it) via e-mail, message boards and blogs. Several hundred downloads later, the plug was pulled. Here in Brooklyn the next morning, hipster eyes almost universally twinkled when told of its existence.

Though once prolific, with seasonally surfacing B-sides and compilation tracks, Beck -- the modern singer-songwriter most often compared, hopefully, to Dylan -- has had little output since 2002's morose "Sea Change." In interviews, he has said his next album would be harder-edged, but also mysteriously hinted that it might just be more in the wispy pastel vein of "Sea Change." Critics puzzled, fans stirred.

The project was linked to producers ranging from pop wunderkind Timbaland to conceptual hip-hopper Dan the Automator to Japanese avant-weirdo Cornelius. In the end, though, it was the Dust Brothers who got the nod, Beck's collage-minded collaborators on 1996's acclaimed "Odelay" (not to mention two of the strongest tracks from 1999's "Midnite Vultures").

But after the smirk-shattering cataclysm of "Sea Change," you really can't go home again -- though you sure can try. Given Beck.com's emphatic posting (also now removed) that the leaked album was unmastered, unmixed, unsequenced, it's hard to know how much to read into these tracks. If forced, one could classify the 13 circulating songs into those that sound very much like Beck's previous work, like the (perfectly fun) Spanglish hip-hop "Odelay" redux of "Que Onda Guero," and a slightly larger handful that chart new territory between "Sea Change's" melancholy and Beck the Younger's exuberance.

Even without an obvious smash -- or helpful iconic tag for "Guero's" direction -- the best half-dozen of the 13 tracks are healthy babes. On "E-Pro," the first single, a devastatingly weird hand-clap breakdown erupts into an anthemic refrain. The unfortunately titled "Earthquake Weather" (a tentative "(maybe)" affixed to the initial labeling) snakes an octave-leaping chorus over a sultry tropical groove while Beck hones his powers of surreality: "The sky is purple," he sings. "Days are changing/ with the weather/ like a riptide/ could rip us away." "Girl" employs a tricked-out electronic false start before dropping into a sweet, up-tempo strummer.

Like Beck's other so-called party albums, it's a pastiche, though this time out the sources are almost invariably familiar. "Go It Alone," "E-Pro," "Nazarene" and "Black Tambourine" are all built around blues-heavy raps (often with harmonica interludes), direct descendents of "One Foot in the Grave," ("Stereopathetic Soul Manure's" tribute to Sonny Terry). "Brazilica" (now likely titled "Missing") and "Earthquake Weather" both lean on nylon-stringed South American exotica for their mystique. Distorted lo-fi guitars dot nearly every song (especially the B-side destined "High 5" remake, "Chain Reaction").

A lot can change during mixing and sequencing, and -- in this case -- one hopes that it might be the disc's lack of punch. Though that could be Beck himself. "Guero" nudges Beck back toward the dance floor, albeit frequently without the accompanying giddiness needed to invite listeners back, too. And if there's little punch, there are fewer punch lines. Though Beck is back in a familiar lyrical landscape filled with strange decay -- nooses that "hang from the sun," "fax machine anthems" -- brilliant throwaways like "Thursday night, I think I'm pregnant again" seem gone for good. That's not necessarily a bad thing.

As a work-in-progress, "Guero" is genuinely promising -- though much rests on the work that remains before the disc's official unveiling. Though some may be retitlings of earlier songs, a full tracklist posted by Beck.com features what appear to be five different songs, perhaps enough to swing the album to full strength. In its leaked state, however, it's hard to imagine "Guero" receiving the royal ovation given to nearly all of Beck's previous releases.

In Dylan parlance, perhaps "Sea Change" wasn't Beck's naked "Blood on the Tracks" confessional at all, but his "Nashville Skyline": a clean break, a purging of the voice and vocabulary for which he'd become beloved. For Dylan, it was the beginning of a long trek into the wilderness. Only time will tell where it might bring Beck.

Jesse Jarnow is a writer, artist and musician in Brooklyn, N.Y.