As the GOP celebrates, the junior senator from California emerges as a fierce -- and lonely -- voice of opposition. 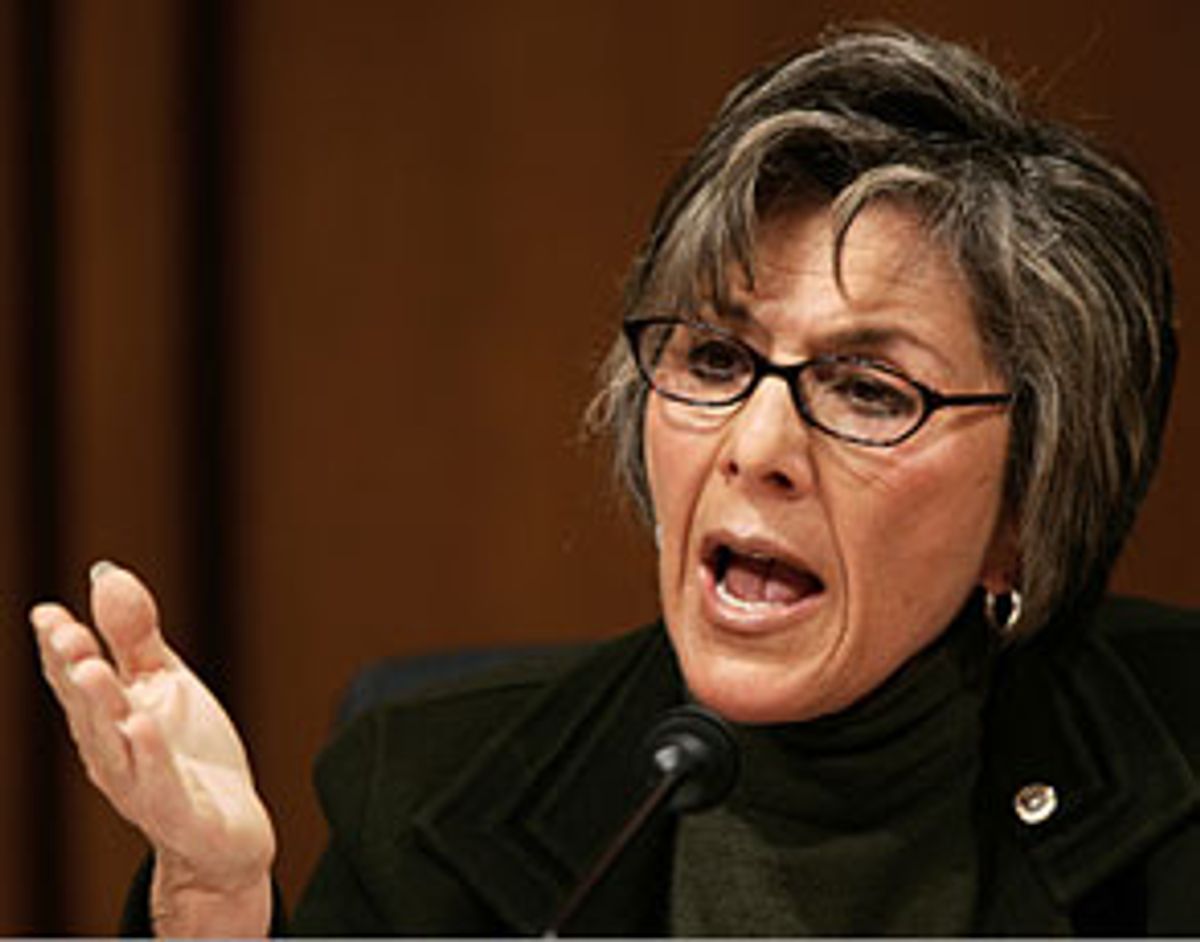 To the victors go the spoils, and the Republicans were counting on collecting some of theirs this week. Condoleezza Rice, the president's secretary of state nominee, would cruise through a quick confirmation hearing, and then the Senate would vote to confirm her in a process so fast that it could be squeezed in between Thursday afternoon's inaugural ceremony and Thursday night's inaugural balls. So confident of the outcome, the White House had Colin Powell deliver his farewell address in advance.

For the second time this month, California's junior senator has thrown a wrench into the works of the second-term White House machine. She did it two weeks ago, when she was the only senator to object to the certification of electoral votes from Ohio. And she did it this week, on the eve of George W. Bush's second inauguration, when she put hard questions to Rice and then cast a committee vote against her confirmation. Ohio's electoral votes were eventually counted, and Rice will eventually be confirmed. But largely because of Boxer, the road has been rockier than the White House had expected; the vote on Rice's confirmation will be delayed until next week so Senate Democrats can have time to debate it.

Boxer may have a reputation for tilting at windmills, but she bristles at the thought that she is engaging in protests that only delay the inevitable. "This isn't a protest," she told Salon Wednesday as she described her decision to confront Rice. "I'm just doing my job of 'advice and consent.'"

Not all Democrats see it that way. Boxer's colleague from California, Sen. Dianne Feinstein, has already lined up behind Rice, saying that Americans can "rest easy" if Rice's "past performance is any indication." And while most of the Democrats and several of the Republicans on the Senate Foreign Relations Committee questioned Rice sharply this week on the administration's handling of Iraq, only Boxer and John Kerry voted against Rice's confirmation when the committee met Wednesday morning.

Boxer's in-your-face approach has given some comfort to Democrats around the country who feel defeated as the Republicans celebrate inauguration week. Boxer says it's all part of a long process, one that will someday see the Democrats in control again.

"I've been here a long time, and I've seen inaugurations come and inaugurations go," said Boxer, who had a surprisingly easy road to reelection for a third term last November. "The issues are the things that touch the American people, and they want to know that we're here fighting for them."

"Here" is Washington, where Boxer spoke with Salon Wednesday. She'll stay in the capital Thursday for Bush's swearing-in ceremony then catch a flight back home to California before the inaugural balls begin.

You're in the news today for your vote against the confirmation of Condoleezza Rice. Two weeks ago, it was because you joined Ohio Representative Stephanie Tubbs Jones in objecting to the certification of Ohio's electoral votes. You're taking an approach to the second Bush term that is different from the one many of your Democratic colleagues have chosen.

I was exercising my responsibility to take a deeper look at what happened in Ohio.

Did it work? Because you provided a Senate objection, Democrats were able to devote two hours in Congress to the issue of electoral reform. But will your objection ultimately lead to anything more substantive than that?

I can't tell you what's going to happen in Ohio per se. That's up to the people in Ohio and what happens in their courts. But what I can tell you is that my leader [Senate Minority Leader Harry Reid] has told me that one of the first pieces of legislation that will be [introduced] will be our bill on electoral reform. I can't say that will happen just because I did what I did. But I called attention to the fact that we've got a lot of work to do to make sure our elections are better, to make sure that people will have confidence in the process.

What about the Condoleezza Rice hearing? Despite your questioning of her, despite your decision to vote against her, she's still going to be confirmed when the full Senate takes up her nomination.

I think we shed the light of truth on the war in Iraq, which really had to be done. Fifty-eight percent of the American people are unhappy with the direction the administration is taking in Iraq. This was an opportunity to speak to the person who was one of the main architects and chief salespersons of the war, and it was an opportunity I could not let go. It's my job. I believe in accountability. I was able to take the issues that we had delved into -- the aluminum tubes, the claims about [Saddam Hussein] having a nuclear weapon within a year, the claims that he had ties with al-Qaida -- and give her a chance to set the record straight. To me, she didn't set the record straight. She answered every question, but she didn't get to the point that I was making.

Rice told you not to "impugn" her "integrity" or her "credibility," but that was exactly what you meant to do, wasn't it? You had questions about whether she had spoken truthfully about Iraq before and after the war began.

I was very honest about it. I told her, "I'm worried about your lack of candor" -- I wasn't denying that -- "and I'm giving you a chance to set the record straight." But she actually made the record murkier, especially on torture. She opened up a whole new front on the lack of credibility.

If people were looking for some sense of a fresh start with the beginning of the second Bush term, they wouldn't have seen it at the confirmation hearing.

The beat goes on. But I think that's where the people come in. We live in a democracy. This isn't a monarchy. The people's opinion is very important here, and right now 58 percent of them are worried about the way this war is going. And so many people watched the hearing. I was very happy to get thousands and thousands of phone calls and e-mails and the rest. And that's what saves the country many times, the people of this country. If we start abusing power, they catch you. That's what I want to do, keep the people engaged. I was really pleased with the breadth and the depth of the questions that were asked, and I like to think that I had something to do with that.

The questions were asked, but at the end of the day, most of your Democratic colleagues on the Senate Foreign Relations Committee cast their votes for Rice.

Many of my colleagues have different rules when it comes to voting on Cabinet members. I set a bar that's very high because I think these positions are very powerful, and others set them lower because they think the most important thing is that the president gets who he wants. I take "advice and consent" very seriously, perhaps more seriously than others. That's their choice.

Senator Feinstein actually introduced Rice to the Foreign Relations Committee, and she didn't say a word about the problems that occurred on her watch as the president's national security advisor.

Senator Feinstein is going to fight in her own way. I think she has been eloquent on the issue of intelligence reform, for example. I think she will continue to fight in the same way. We're not joined at the hip. We're not in agreement all the time. That's fine. There's nothing wrong with that. Everyone fights in his or her own way. She chooses her way, and I have my way, and Senator [Joseph] Biden [D-Dela.] has his way.

Biden lambasted Rice for "parroting" false statements from the Pentagon, but then he voted in favor of her confirmation anyway. With so many Democrats choosing that kind of path, what's the value in the confrontational approach you've taken?

America cares. They're watching, and it's an opportunity to lay out the issues, to send a message that you're going to be watching, and I think that was achieved. At the end of the day, we achieved that. Here's the thing, a lot of the people in the media -- and I'm talking about the more conventional media -- all they care about is the score. They don't care about the process. But the beauty of our country is that there is this process called democracy, and it's just as important as the end result.

Your critics would say -- and, in the context of the protest of the electoral vote, they did say -- that you're the one who has trouble understanding democracy. Bush was reelected in November, and he says his reelection was an "accountability moment" in which the American people ratified his decisions about Iraq.

That's what George Bush said, and I don't agree with that at all. We're all responsible for our actions in our lives, and we all have to be held responsible and accountable for things that will happen when we're no longer in office, too. I mean, if we cast a vote for Social Security [reform] so that we end up with senior citizens walking around garbage cans looking for food, it doesn't matter if that happens a year from now or 40 years from now. We're responsible. There's no statute of limitations on bad judgment.

And it's not as if the judgments that the administration made about Iraq during the first Bush term cease to have repercussions during the second Bush term.

They said they were "rolling out a new product." Remember, [White House chief of staff] Andy Card said that. And they did, and the product they rolled out was a war. If it had been a can opener or a new shoe or some product that didn't hurt anybody, fine. But it's a war. And if they "roll out" another "product" like this, we have to make sure that all the mistakes and the misstatements that were made about this one -- we have to make sure that people are aware of it next time.

I think people paid attention to this. I don't think the Bush administration thought people would pay so much attention to this, but they did. I feel really good about it. The process in a democracy is as important as the outcome. You have to make sure that everyone in this country feels represented. And I would bet that, today, everybody in this country feels represented, whether it was me or Senator Biden's questions or Feingold's questions or Dodd's or Chafee's or Lugar's or whatever. They feel represented today.