Codependent no more! Jonathan and Victoria exit "The Amazing Race." Plus: Sundance on the small screen, and science with a sense of humor on "Nova ScienceNow." 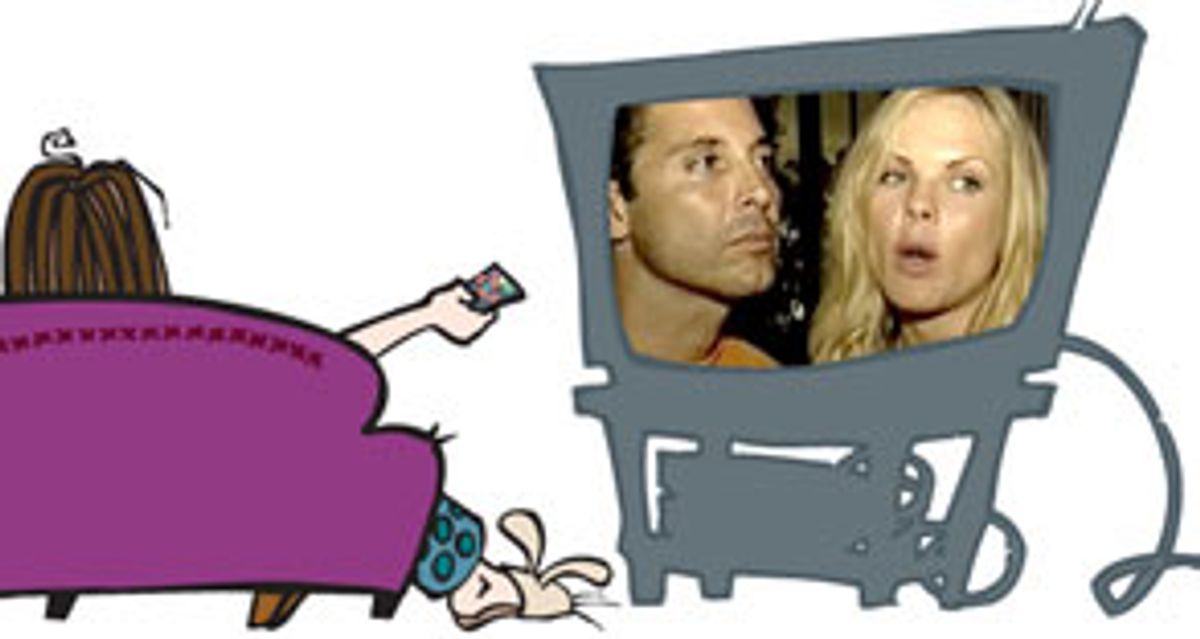 Sundancin' in the dark
Sundance is a mystifying thing. For reasons that transcend the reach of the human mind, these humans actually choose to tromp around in the out-of-doors, wearing many layers of scratchy, restrictive clothing, just to watch a bunch of two-hour dramas -- made-for-TV movies, I guess, but more like epic miniseries, except they're not made for TV and there's not really a series of them, just one. Some of these movies will appear on the Sundance Channel and Showtime and Discovery, so those make sense to me, but others will appear in big theaters that you have to leave your house to get to, and some of them will never show anywhere else but here, to people wearing fuzzy pink Ugg boots!

I'm in a haze. I just keep gazing at my schedule, trying to remember my hat and coat and where to catch the bus and where I'm going. For those of you who don't know, a bus is a big vehicle that a lot of people share, and it makes lots of stops -- not just the one you want! Needless to say, it's wildly inconvenient, and it takes up most of your day, really, and as a result I have to keep this column really short. Times are tough, indeed. All I can do is thank the good Lord for small blessings like free snacks in the press room and the dream I had last night about kissing Brad Pitt. (It's not a sin, because he's available now. He has very soft lips.)

No place like home
For those of you with the good sense to stay indoors where you belong, there are plenty of tasty Sundance offerings to keep you occupied. Last year's opening night feature, "The Best Thief in the World," airs on Showtime this week (Friday, Jan. 28, at 8 p.m.) and features Mary-Louise Parker and some adorable kids with filthy little mouths spewing out all those dirty raps that the bad kids used to yell on the school bus in the '70s -- when they weren't giving you noogies, that is. (Full disclosure: The director, Jacob Kornbluth, is a friend of mine. Yes, I have to tell you that for ethical reasons, or I'll end up with some biopic written about me like Stephen Glass and they'll probably make Hilary Swank play me, even though I specifically instructed my agent that it was Jennifer Garner or no one at all.)

The Sundance Channel will be covering this year's festival, featuring little segments hosted by Jay Mohr, a guy who was most definitely one of the bad kids on the bus; I'd put good money on it. It will also be showing films from last year's festival, most notably the unforgettable Iraq war documentary "Control Room" (Monday, Jan. 24, at 10 p.m.) and the Grand Jury Prize-winning documentary "Dig!" (Thursday, Jan. 27, at 10 p.m.).

And, for those of you novelty junkies who only like stuff that's new, new, new, you'll have to wait a while, but Werner Herzog's highly anticipated documentary "Grizzly Man" will be airing on the Discovery Channel this fall (check your listings). (It may also be showing in theaters this spring.) I can't wait to see this one, which is about that guy Timothy Treadwell who lived with the grizzly bears and wrote "Among Grizzlies" and then a grizzly bear attacked and killed him and his girlfriend.

Botox twin powers, deactivate!
But let's get back to the grizzliest news of the week: Jonathan and Victoria, perhaps the most hideously abusive, egomaniacal, perversely punishing, unstable duo in the history of reality television, were unceremoniously booted from "The Amazing Race" after they came in last in the race. Their signature brand of grandiose chaos -- rife with melodramatic flameouts, deadly verbal assaults, shrill whining and hysterical sobbing -- had become the scary spice in this season's stew. While some blame the couple for sullying this wholesome Jerry Bruckheimer-produced bit of entertainment, changing a fast-paced travel fantasy into an international version of "Fear Factor," many die-hard "TAR" fans recognize that squabbling couples have always been the bread and butter of this show.

Still, between the unsavory outbursts of the Botox twins and the squabbles between the wrestlers, for whom smacks in the head and shouts of "Shut up!" and "You're stupid!" constitute intimate communication, the producers have to be kicking themselves for going overboard with the mutant casting this season, when they could've just squeezed in slightly more freakish pairs each season without calling our attention to it and making us feel all cheap and dirty for enjoying the scrapping so shamelessly.

Plus, what do we even know about Jon and Kris, other than they're great at everything, they're madly in love, they have insanely nice bodies, and they stay positive no matter what occurs? I used to hate people like them, but now that I'm old and realize that some people are actually chipper all the time, they're not just faking it, I envy the chipper among us -- especially when they have abs like that. That's the thing about the chipper -- they don't mind doing stomach crunches for several hours a day. Hell, they don't mind much of anything. They're utterly immune to hassles.

In contrast, I may be one of the most hassle-averse humans ever to walk the earth. If there's traffic and we're late for the movie, forget it. Rain constitutes a natural disaster of epic proportions, one that requires staying indoors at all costs. I would be the worst contestant in the history of "The Amazing Race."

In other words, I might look something like Adam aka Hellboy, the kid who keeps pooing in his pants and urging people to tell his mom that he loves her (just in case he perishes, dig?) every time he has to do something difficult or scary. I love that he's with Rebecca, the player with the biggest cojones in the entire race. Sometimes I feel a little bit annoyed with Rebecca for being so hard on Adam, though. I mean, yes, she doesn't love him anymore. True, she wants him to get the hell away from her. (He responds to this by wrapping her in a clingy bear hug. Not very adaptive, that Adam. It's stunning that his genes have made it this far.) But she could be a little bit less harsh about it. Then again, pathetic people can really bring out the mean in all of us. It makes for good television, anyway.

Again, "The Amazing Race" is a litmus test. You either love to see couples bicker, or it makes you uncomfortable. Personally, seeing relationships fall to pieces is one of my favorite things in the entire world. I could pull up a chair into most couple's counseling sessions with a big bowl of salty snacks, and I'd have a big grin on my face for the entire hour.

Anyway, the main perpetrators, Jonathan and Victoria, have finally been dismissed. What will they do now? It seems they have enough money not to worry too much, but even if they did worry, I don't think it would show on their foreheads. Lest they return to the public eye in any capacity -- and that seems inevitable, doesn't it? -- let's just keep one image burned in our memories for all time, an image that reader Leslie wrote in to remind me of: that of Jonathan, running down the road in his red underwear, yelling at Victoria, "Have some self-respect!"

Ah. The boundless wonders of the reality world never cease to thrill my very soul.

Science makes, the world takes!
Speaking of boundless wonders, Nova's new show "ScienceNow" is a clever, creative exploration of the science world, from the latest discoveries and ideas coming down the pike, to the eclectic geniuses who make science happen! Personally, Jonathan's psychosocial pathologies fascinate me more than most scientific inquiries, but "Nova ScienceNow" makes it all seem interesting and worthwhile. For example, did you know that if New Orleans suffered a direct hit from a Category 5 hurricane, the French Quarter would potentially be under 22 feet of water, and because the city is in a huge basin, there'd be no way for the water to drain?

But my favorite segment was the one that focused on an engineer named James who keeps pet ants and creates swarming robots and schedules every second of his day. ("There's always time at the red lights to tie your shoes," says James.) They even showed him arguing about his intricate schedule with his girlfriend, catering directly to my rubbernecking demographic.

James: "It's very precise. It's a serious, intense schedule."

Girlfriend: "It doesn't ever go according to the times that are here."

James: "It does sometimes, except for the events right before I see you."

Girlfriend: "Those ones! Just those ones!"

Trust me, you have to check out "Nova ScienceNow." It premieres Tuesday, Jan. 25, on PBS (check local listings for times).

Next week: Who knows? In the meantime, look for my latest coverage of Sundance here.