A new author brings us a story collection populated with the sights and sounds of Thailand. 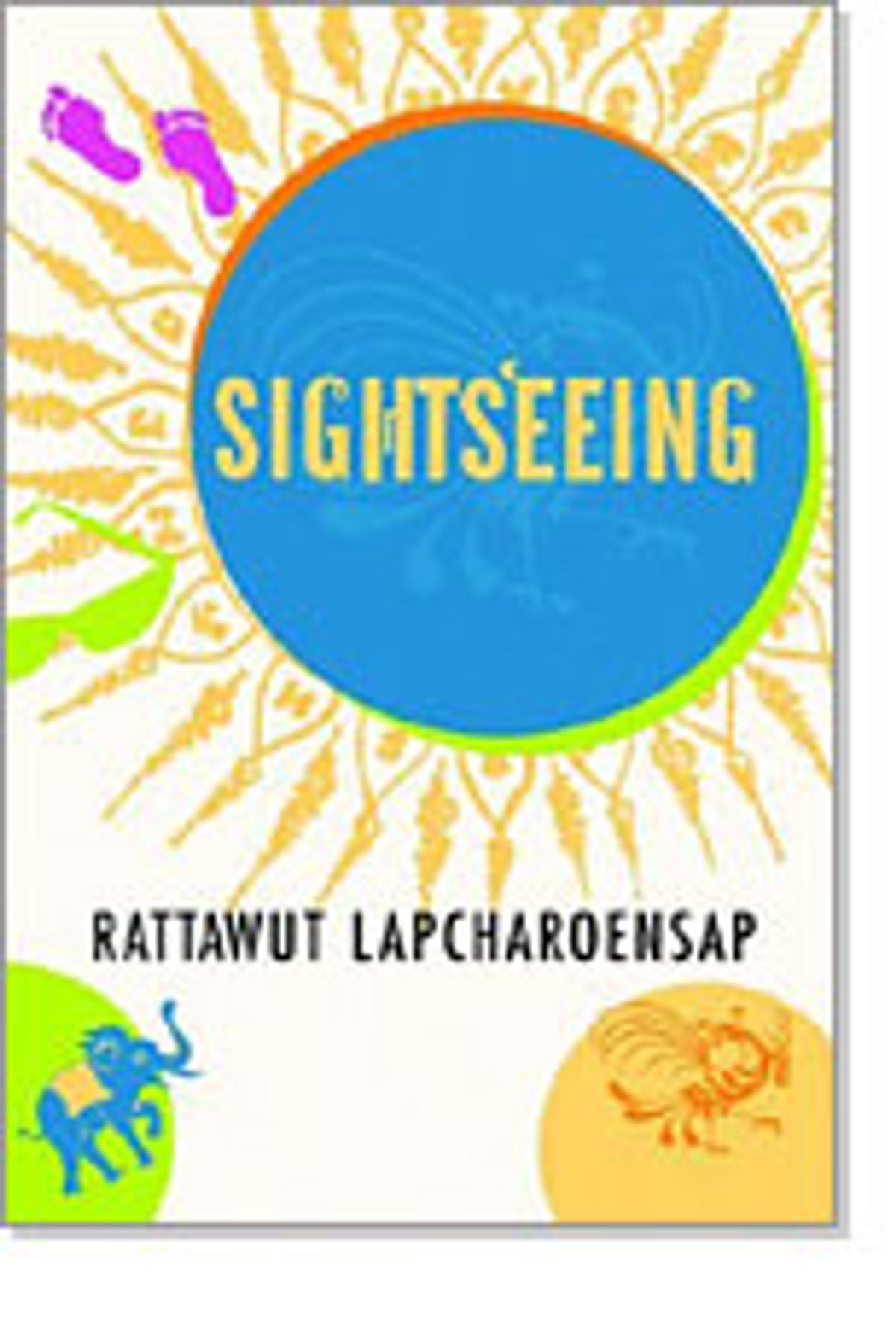 "I remember Ma telling me as a child that Thailand was only a paradise for fools and farangs, for criminals and foreigners," says the narrator of "Sightseeing," the title story in Rattawut Lapcharoensap's first collection. Like many of the other narrative voices here, this one belongs to a Thai boy who's too young to be embittered toward the constant influx of tourists and old enough to desire closeness to them, a cusp-walker who guides us readers, tourists ourselves, through a Thailand little seen. In seven stories we get the most unparadisaical glimpse of gangs and cockfights, whores and shantytowns, thrust up against sandy beaches and mango trees. It's the distance between that outsider's paradise and the native's often grim reality that Lapcharoensap shows us in his tales, so tenderly crafted and beautifully realized that they'll snuggle up behind your heart and stay there for a long time.

Lapcharoensap, a 25-year-old Thai who was born in Chicago and raised in Bangkok, renders the sometimes brutal sadness of living between Thailand and the West in two of the most biting stories, starting with "Farangs," the first in the collection. ("Farang" means "Caucasian," and like the Hindi "farangi" or the Indonesian "bule," is often used derisively.) The narrator again is an adolescent boy, a son of a Thai motel owner and an absent American sergeant, who falls constantly and innocently in love with the farang girls who stay at their island inn, believing, always wrongly, that he can be something more than a vacation fling to them. In "At the Café Lovely," the narrator's big brother takes him out for a birthday treat at an American fast-food joint; they wear their best clothes and stand in line, the younger brother daydreaming an experience not unlike a McDonald's commercial: "We would look like those university students I had seen through the floor-to-ceiling windows, the ones who laughed and sipped their sodas. Afterward, we would walk into the summer sun with soft-serve sundaes, my brother's arm around my shoulder." Later, the brother will take him to the Café Lovely, where the promise of the English name will ironically belie a night of sniffing paint thinner and sneaking off with prostitutes.

Other stories take us deeper into Thai life. The titular character of "Priscilla the Cambodian" is a wild little girl with gold teeth, a refugee whom the narrator befriends and who inadvertently introduces him, when locals burn down the Cambodian shantytown, to adult fear and hatred. In "Draft Day," the narrator goes with his best friend to a compulsory draft lottery. His parents have bribed an official to fix the lottery in his favor, but his friend has no such protection, and it's his dawning sense of guilt and betrayal that pushes the narrative, up to the moment when the friend is drafted, shaved and sent to the army. It's a difficult feat to hold a reader's attention when we know what is going to happen, but Lapcharoensap succeeds by drawing us in with the details: the beads of sweat on the boys' faces, the parents standing on the sidelines, watching as their sons are taken away from them.

The first five stories are all told from the point of view of young boys with similar voices, and this has a comforting effect. One of the difficulties in reading a short story collection is that, just as you get used to a particular voice, it abruptly changes, and "Sightseeing" provides a nice change from typical collections for that reason. Lapcharoensap's boy narrators are so fully realized that you want to stay with them, even when the towns, back stories and plots around them change. They are sweetly innocent and often brutal in that innocence, barely blinking at the adult tragedies unfolding around them. ("When children learn to acknowledge the gravity of their loved ones' sorrows they're no longer children," says the little brother of "At the Café Lovely," and the sentiment perfectly sums up the behavior of the child narrators who barely acknowledge their parents' misery, smoldering in the background.)

But before you can assume that young boys are the only creatures whose voices Lapcharoensap can channel, the last two stories swerve out from under you. In the last and longest story, "Cockfighter," the narrator is a 15-year-old girl in a small town oppressed by its own sort of mafia, a father-son team of bullies. It's a sprawling, dark tale of violence and masculinity seen through the eyes of a girl who can only be threatened by, and not generate, those things. But best of all is the penultimate story, "Don't Let Me Die in This Place," which is told by an old American man come to Thailand to live with his son and family. Stuck in a wheelchair after a stroke, he wrestles with trying to find some of his own life in his foreign surroundings, and something of his own self in his "mongrel grandchildren," with whom he shares neither skin color nor language. ("I rarely say their names at all," he says. "I call the girl 'girl' and the boy 'boy' since the few times I tried calling them by their real names, 'Ruchira' and 'Sornram,' they'd both laughed insensitively at my attempts.") It's his voice that resounds over the collection, carrying all the anger and indignation of being stuck, indefinitely, between two cultures.

Our next pick: A thrilling tale of suburban family life, narrated from beyond the grave