With big deals breaking at Sundance -- including the biggest ever -- here are some films that will definitely be coming to a theater near you. 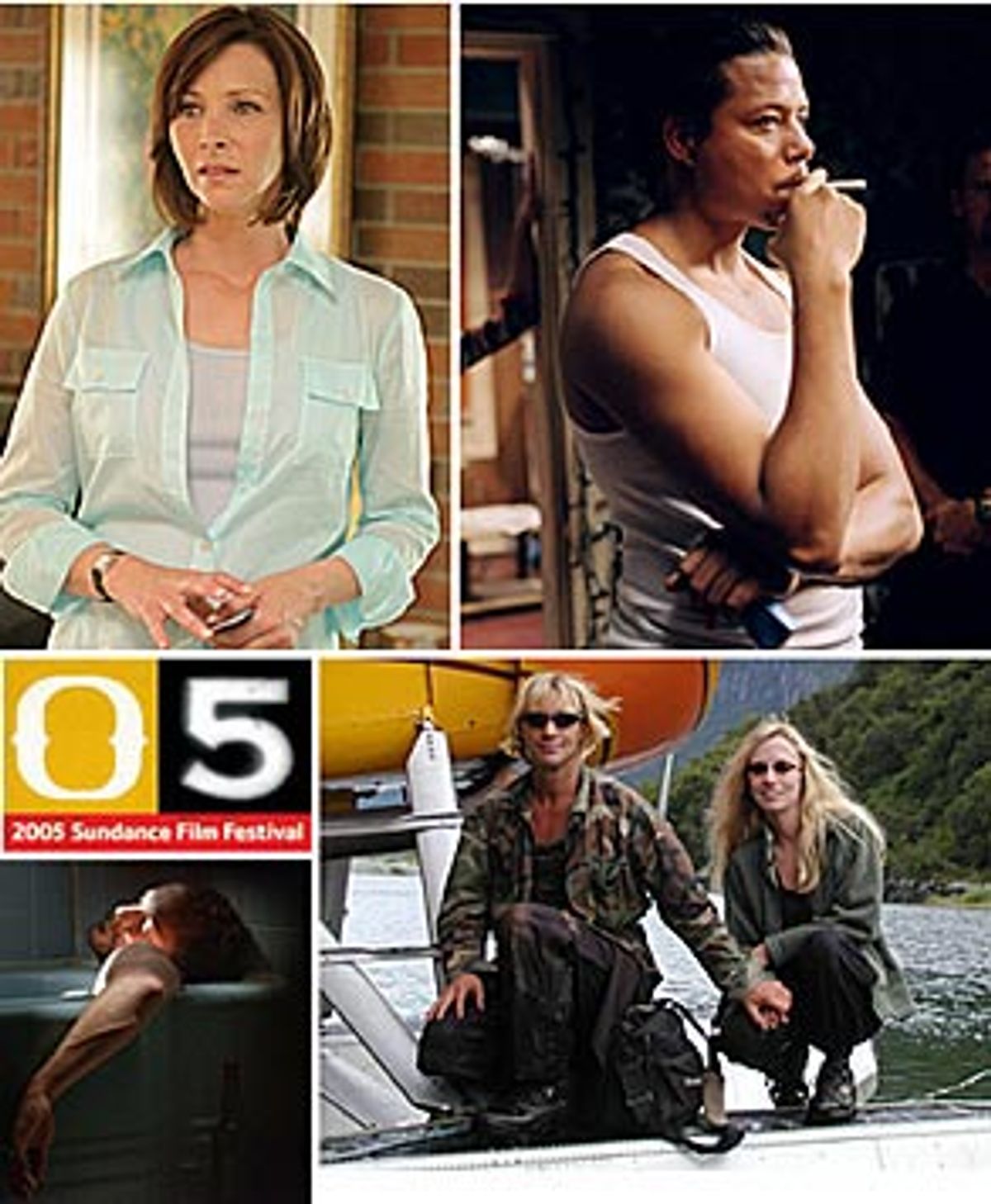 Festival-goers were shedding their coats on Sunday as the temperature peaked at a sunny 40 degrees in Park City, and some big deals were heating up as well. Variety reported that Miramax would likely pick up "The Matador" by late Sunday night for roughly $7.5 million, and "Hustle & Flow," which enjoyed early buzz as a fiercely original but also potentially lucrative commercial film, was picked up by Paramount for $9 million, part of a larger $16 million, three-picture deal for producer John Singleton. This multipicture arrangement constitutes the biggest dollar deal in Sundance history, a fact that should make plenty of filmmakers with pictures to sell all the more hopeful that this will be a big spending year for the studios.

But early reports of acquisitions aren't surprising, considering the high praise floating around for so many films at this year's festival. And once you see "Hustle & Flow" -- now it's certain that you'll have a chance to -- it won't be hard to understand why this film inspired a bidding war. Terrence Howard's portrayal of Djay, a pimp who aspires to become a respected rapper, may prove to be the most transfixing performance of the festival. Writer/director Craig Brewer takes impossibly hard individuals and softens them in unexpected ways, but without the sappy, dream-world rise from the gutter that you'd find in a less richly constructed, finely scripted film. "Hustle & Flow" is everything you want a film to be: unpredictable, daring, clever, heartwarming. Only a zombie wouldn't be moved by it. And even the zombies at the press screening -- a gaggle of snarky journalists who are more likely to sneer than sniffle -- applauded loudly as the credits rolled. Put Brewer's film on your to-do list for 2005.

Miramax's pursuit of "The Matador" also makes perfect sense, and not just because it stars Pierce Brosnan in a complete departure from his typical suave tuxedoed role. The film lies somewhere between a character-driven heist along the lines of "Sexy Beast" and a slightly dark buddy movie. It's small and a little odd and the payoffs are inconsistent, but when Brosnan's lonely assassin meets up with Greg Kinnear's hopelessly square yuppie, the unlikely friendship that forms is unpredictable enough to hold our attention to the end. Of course, Hope Davis' brilliant turn as Kinnear's naive but slightly naughty wife -- who asks, breathlessly, to see Brosnan's gun soon after meeting him -- is the cherry on director Richard Shepard's sundae. And just try to imagine Brosnan with a tiny mustache, spitting lines like, "I look like a Bangkok whore on a Sunday morning after the Navy left town." Tough to picture, isn't it? Better go see it for yourself.

And the festival opener, "Happy Endings," marks another apparent success. Written and directed by Don Roos, the man behind "The Opposite of Sex" (the one where Christina Ricci acts like an unthinkably manipulative bitch), "Happy Endings" is a remarkably clever ensemble film, which strings together the lives of several characters, many of whom share that self-serving, fast-talking streak that Roos seems to love. Lisa Kudrow fully inhabits Maimee, a woman being blackmailed by a documentary maker who claims to know the son she gave up for adoption years ago. Tom Arnold is surprisingly charming as a dad who's something of a chump, but whom you still can't resist rooting for. And Maggie Gyllenhaal plays a sly, world-weary meanie, a singer who moves in with Arnold's son (who is gay, but hopes to prove otherwise) before setting her sights on Daddy. Armed with an extremely clever script, a strange but very original use of title screens, and skillfully interwoven story lines, Roos meets the formidable challenge of creating an ensemble film that entertains, amuses and somehow fits together neatly at the end, like Paul Thomas Anderson with much, much sharper teeth.

Speaking of sharp teeth, Werner Herzog's documentary "Grizzly Man" presents a surprisingly affecting examination of the life of Timothy Treadwell, a photographer and outspoken supporter of the grizzly bear and the author of "Among Grizzlies," who shot over 70 hours of footage of himself over the course of several summers when he coexisted with a bunch of grizzlies in Alaska. Treadwell, along with his girlfriend, was attacked and killed by a grizzly bear in 2003.

"The bears probably thought that there was something wrong with him, like he was mentally retarded or something," said Sam Egli, a helicopter pilot who assisted on the cleanup after the Treadwell tragedy. "I think he had lost sight of what was really going on." Treadwell's bizarre behavior on the tapes, which ranges from egocentric to childlike to goofy to surreal, seems to support this possibility. He comes across as a cross between Kato Kaelin and Tiny Tim, showing off for the camera between long-winded, somewhat naive digressions and occasional enraged outbursts. But instead of treating Treadwell as a quack or a fool, Herzog clearly develops a soft spot for him after having sifted through so much footage, even though their views are very different. At one point, after Treadwell becomes despondent over the death of a young fox, Herzog's heavily accented voice-over cuts in: "Here, I differ with Treadwell. He seemed to ignore the fact that in nature, there are predators. I believe that the common denominator of the universe is not harmony, but chaos, hostility and murder."

Of course, the legendary filmmaker can't resist inserting his own outsize ego into the story, but somehow this documentary has room for two larger-than-life characters. Ultimately, the force of Herzog's conviction helps to unveil the sweetness and heart behind even the most questionable of Treadwell's decisions, both during his many stays in Alaska and in the final days before his death.

Along with these standouts, "The Dying Gaul," "Inside Deep Throat," "Murderball" and "Rize" are receiving rave reviews among festival-goers, and seem likely to find their way to theaters sometime this year. Sadly for indie fave Hal Hartley, though, his "The Girl From Monday" is a mess of a movie plagued by leaden performances and a rambling plot. But as irritating and precious as Hartley's film might be, it's nice to be reminded of just how difficult it is to make a really good movie, when so many of this year's directors make it look so easy.