Robert Redford's worries be damned, Sundance continues to ape Hollywood, from the velvet ropes to its trash glamour. 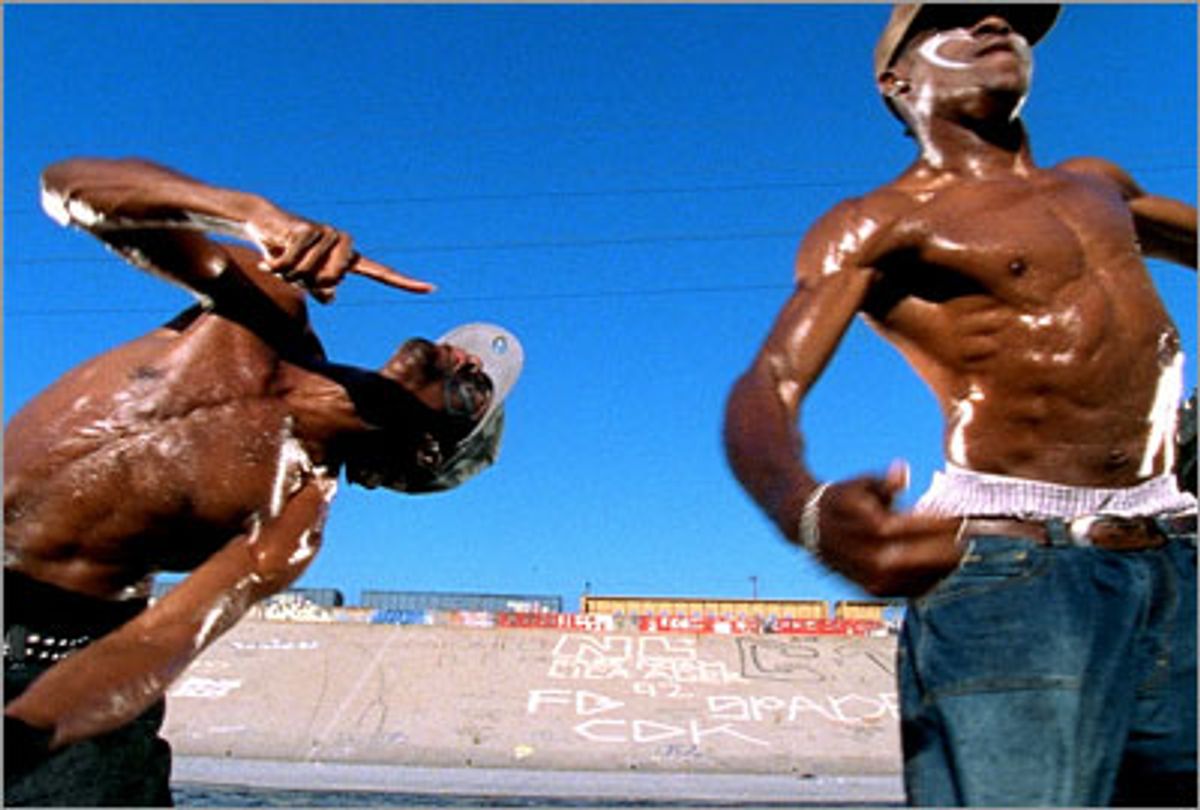 After a day rushing over icy streets from one movie to the next, it's tough to do much more than stare blankly at the dance floor at the "Rize" premiere party like it's just another movie. David LaChapelle's electrifying documentary about a new form of street dancing called Krumping created a rush of interest in the party -- or maybe it was the rumor that Paris Hilton might be here. Either way, the party is on, and the DJ rotates through the usual suspects, spinning hits from Usher and the Black-Eyed Peas, while producers and agents shed their telltale black leather jackets to dance with Sundance party girls -- nymphets from Hollywood and Salt Lake City with meticulously applied makeup and blond hair ironed straight, poured into jeans, sporting theatrical black hats and rabbit fur coats. They heard this was the hot party, and through the mysterious machinery that surrounds such events, got on the guest list while 50 or 60 shivering mortals stood outside, trying to argue or cajole their way in the door.

Where do these girls come from? "I think they just grow them specifically for party use," offers BeBe Lerner of I/D Public Relations, the firm that's handling "Rize" for the festival.

There's a crush outside the VIP room as well, the sort of thing that self-respecting inhabitants of Los Angeles avoid like the plague. But it's my job to push in there and soak up the vibe, damn it, so after 15 minutes of standing behind a crowd four bodies deep, listening to a gaggle at the front making angry sounds about important friends they're meeting inside only to be rebuffed by gatekeepers who insist that only those with green bracelets shall pass, I flash my green bracelet and say, "I've got one! Let me through!" -- cringing at every word.

"I'm the producer of the film!" a leather-clad shoulder in front of me hisses.

This is the peculiar tar pit of Sundance, an addled mix of Everyman spirit and credential-flashing one-upmanship. While Robert Redford may wish to keep red carpets and limousines far from Park City, without the usual complexities of velvet-roped infrastructure, the chaos of the crowds can create even more chest-puffing Industry Darwinism than you'd find around the typical Hollywood affair. What's surprising is not that this producer snapped at me, but that he stood patiently behind a tall girl who was getting surly with the highest word count imaginable, or that the gatekeeper was an overwhelmed-looking woman who listened politely to her impassioned pleas instead of telling her to get the hell out of the way.

There's an egalitarian spirit at Sundance, and that makes the unfortunate but somewhat necessary job of keeping the hoi polloi out even more difficult. "It gets more intense here because there are just so many people and everybody thinks that they're someone," says Sanny Van Heteren, a VIP door host who gets hired for exclusive events in New York and L.A. and was flown to Park City to work the door at the "Rize" party.

"They don't give up here. There's always the one that stays outside the whole night."

But my friend and I don't have that kind of staying power. After being scolded by the producer, we're about to move on when suddenly we're whisked through the doors.

Suddenly we're standing around in a room crowded with well-manicured humans, and it's about as exciting as it was in the crush outside. We belly up to what we think is the bar, since there are a bunch of people standing in line, but then the crowd momentarily clears, and where we thought the bar should be, there's Paris Hilton, holding court, a bevvy of eager male fans surrounding her. She's got a wide smile on her face, and seems to be humoring her admirers with polite patience, with a larger-than-life Pamela Anderson and party perennial Stephen Dorff at her side.

Meanwhile, a few of the kids from "Rize" are exchanging shrugs a few feet away like "How did we get here?" After describing the hardships of life in the 'hood to a packed theater, here they are, surrounded by industry types and journalists and lip-glossed fillies. Only when the dancers are asked to perform do they seem totally at ease, moving their bodies in frenzied motions that make the predominantly white crowds gasp and coo. It's great to see kids who've struggled through the horrors of poverty and gang violence get a moment in the spotlight, but there's also something unsettling about seeing such a raw form of self-expression trotted out for the amusement of such an entitled, A-list crowd.

Some leave when they hear that the "Inside Deep Throat" party has strippers, while others stick around to watch Naomi Watts working her way in the front door. The VIP room never thins out, though -- entitlement doesn't take a holiday, even among the snowy hilltops and twinkling lights of Park City.

Van Heteren says she eventually eliminated the VIP wristbands because a bunch of people were handing them out to friends. "So then you'd have the same people coming back later with a wristband, and they'd get all angry and say, 'I never forget a face!' like I'm gonna lose my job or something.

"I like doing the doors because it's fun, but it's ridiculous how seriously people take it. Like, I have to remind people, 'Hey, you're just going to a party.'"

Of course, the teeming masses aren't the only ones who get attitude. "A lot of door people get into that attitude too, and it's not fun. You feel like saying, 'OK, you're just a door person. Get over yourself.'"