Some wounded soldiers back from Iraq are having to pay for meals at Walter Reed Army Medical Center. Veterans' groups say it's another symptom of fighting a costly war on the cheap. 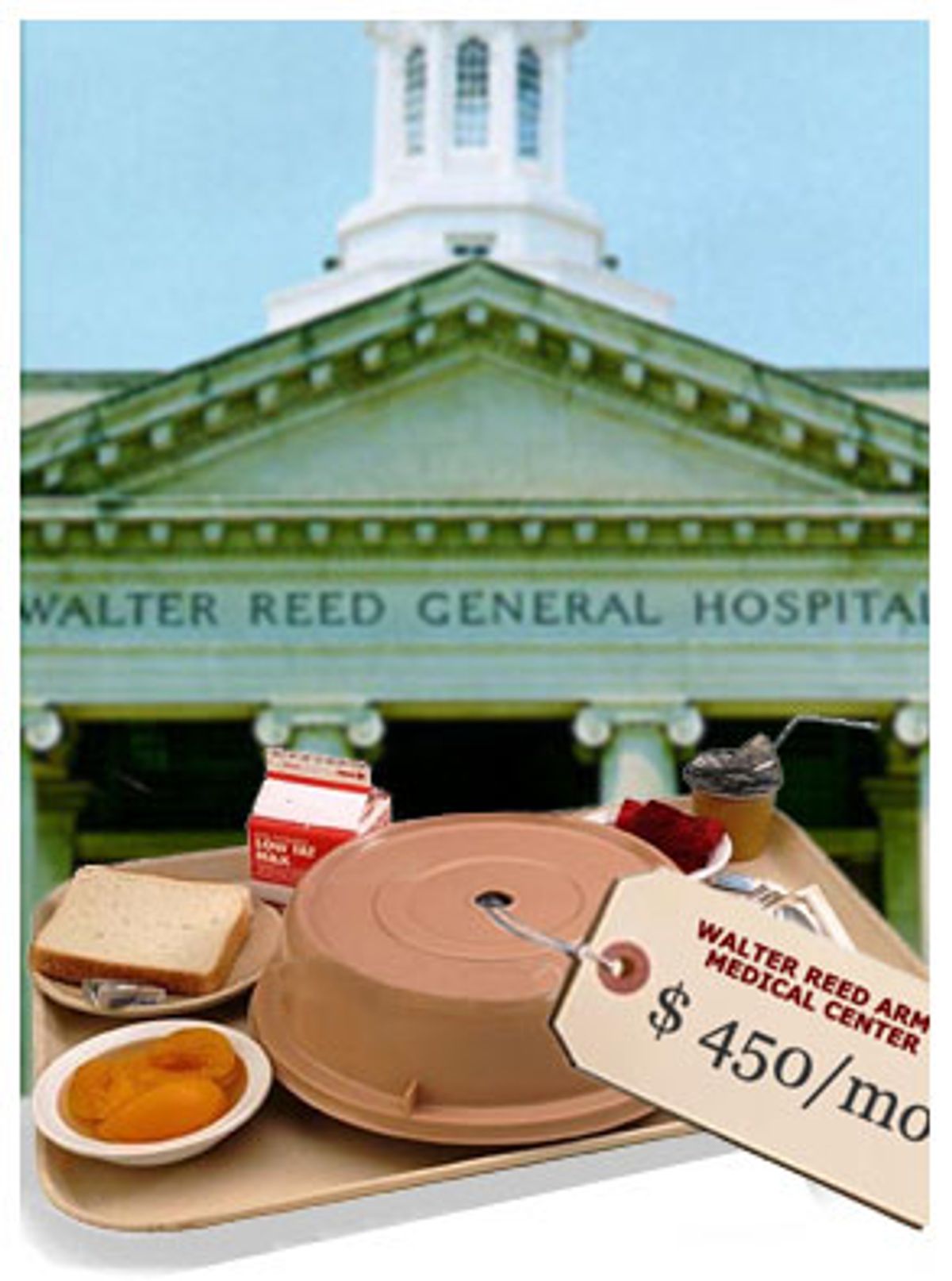 Most patients at the Walter Reed Army Medical Center in Washington have a lot on their minds: the war they just fought, the injuries they came home with, the future that lies ahead. The last thing a wounded soldier needs to worry about is where the next meal is coming from. But for hundreds of Walter Reed patients, that's a real concern. Starting this month, the Army has started making some wounded soldiers pay for the food they eat at the hospital.

Paying out of pocket for hospital meals can impose a serious financial burden, costing hundreds of dollars every month. That can be a lot of money to a military family. But perhaps worse, the meal charge feels like an ungrateful slap in the face to some soldiers. "I think it sucks," said a soldier from West Virginia who broke his neck in Iraq after falling off a roof. "I think that people should be able to eat. They get us over there, get us wounded and shot up and then tell us: Fend for yourself. You are all heroes, but here you go."

Whether it is the lack of protective armor for troops in the field or, now, wounded troops paying for food, complaints from soldiers have shed an unflattering light on how the military bureaucracy takes care of its troops. And they have prompted accusations that the Pentagon is fighting the Iraq war on the cheap, no matter what the cost to soldiers. The meal charge policy "is an example of a much larger problem relating to the overall cost of the war. It is all an indication of extreme costs they are trying to make up on the backs of these men and women," said Steve Robinson, a retired Army Ranger and the executive director of the National Gulf War Resource Center. "If the war is costing too much, the one place you don't skimp is on soldier and veteran programs. The administration has no problem deficit-spending on the needs of conducting war, and we see no reason not to apply the same methodology to veterans' benefits and soldier care."

A veterans' advocate who lost the use of his legs fighting in Vietnam said the meal charges constitute a personal affront to soldiers. "I don't care what bureaucratic bullshit they come up with, this is an insult," said Bobby Muller, chairman of the Vietnam Veterans of America Foundation and director of the foundation's Alliance for Security. "I cannot believe that people are being charged for their meals. This is a showstopper."

For its part, the Army explains -- and defends -- the food charges at Walter Reed by saying they apply only to some outpatients, not inpatients confined to hospital beds. "I have been absolutely assured ... that no inpatient has been charged for meals," Walter Reed spokesman Don Vandrey told Salon. But until Jan. 3, outpatient soldiers who served in Iraq or Afghanistan ate for free in the chow hall. Now outpatient soldiers there longer than 90 days pay for meals in cash. Although Walter Reed did not disclose the exact number of soldiers affected, the policy is most likely to affect at least the estimated 600 soldiers getting long-term outpatient care at the hospital in what the Army calls "medical hold."

Soldiers in medical hold are considered outpatients, but they usually live on hospital grounds -- some are put up in nearby hotels if housing on the grounds is full -- and have little choice but to buy food at the Walter Reed chow hall. Even as outpatients, soldiers in medical hold often have serious injuries. Some have been blown up by roadside bombs or crumpled in Humvee wrecks. They have serious head wounds and amputations. Others are struggling with post-traumatic stress disorder after being flown out of Iraq with shellshock. Some soldiers in medical hold are waiting to get processed out of the Army because their wounds are so serious that they will never return to duty. But processing at Walter Reed can take over a year, much to the frustration of the soldiers who would prefer to get outpatient treatment near their homes and families. Soldiers in medical hold also complain they are still expected to line up for daily formations and buy new uniforms even as they struggle with debilitating physical and mental trauma from their service in Iraq. They say being charged for food while they're recovering is one more indignity.

From the Army's perspective, the meal charges follow Army rules that are supposed to prohibit soldiers from getting free food as well as a separate food budget. But the only soldiers prohibited from getting both, under the new rules, are the long-term outpatients. "If they get [the cash each month] they would be expected to pay for their meals," said Vandrey, the Walter Reed spokesman. He said the hospital was "really cracking down on soldiers who are getting both."

But here's how the new rules drain hundreds of dollars a month from the pockets of soldiers: Enlisted soldiers get an extra $267.18 every month in their paychecks for food. So before this month, all soldiers at Walter Reed got free food at the chow hall and extra cash. Soldiers say they received that extra food money while they were serving in Iraq, too, and they just let their families spend it on groceries. Now, though, the outpatient soldiers forced to buy meals at Walter Reed say they could spend around $15 a day if they eat three square meals at the dining hall -- about $3 for breakfast and around $6 each for lunch and dinner. That adds up to $450 a month, $183 more than soldiers' food allowance from the military. (The situation is even worse for officers, who get only $183.99 extra each month for a food allowance.) The soldiers at Walter Reed point out that that they don't have the option of eating at home to save money because they are stuck at the hospital. Vandrey said spending $6 for lunch and dinner sounds excessive. "I eat breakfast and lunch there every day and I never spend more than $5 a meal," he said.

Most soldiers in medical hold eat at Walter Reed every day, too. But for those well enough to leave the hospital grounds, a favorite spot -- and a rare treat  is the local Red Lobster, particularly if the press is paying. At a recent meal there, three soldiers from Walter Reed told Salon the new meal charges were putting a serious strain on already tight pocketbooks. (All three ate hefty-size meals.) "I don't starve, [but] it might be beans and weenies or a cup of noodles," said the soldier from West Virginia who was treated for the broken neck; he can now walk, but does so with an awkward, bowlegged gait. "I'm not going to starve to death, but it is an issue that really sucks." A soldier from Pennsylvania said, "They want to charge us for uniforms, for food, everything."

Notwithstanding the charges for food, it should be said, Walter Reed has gained recognition for its excellent medical treatment of acute battlefield injuries, including those sustained by amputees. Soldiers seem to agree that while the hospital has its problems, that particular credit is well deserved.

The soldiers interviewed for this story asked for anonymity because they feared getting into trouble with their chain of command for speaking out. Many soldiers from Walter Reed attended the Heroes Red, White and Blue Inaugural Ball last week, attended by Secretary of Defense Donald Rumsfeld, Deputy Secretary Paul Wolfowitz and others. Soldiers told Salon they were lectured on the bus on the way to the ball that they would face consequences if any untoward comments about the military appeared in the press. One soldier said he and others were told that they should not feel compelled to speak with reporters, but if they did, they would be in their commander's office in the morning if they said anything negative.

Beyond the creeping food bill, perhaps what's most bothersome to soldiers about the meal charge rule is the principle of the thing: Paying for food at an Army hospital after fighting in a war doesn't seem right. "You know they treat us like shit up here," said the soldier from Pennsylvania. One officer from the Army Reserve who served in Iraq told Salon he was "highly disgusted" at being asked to pay for food after being stuck at Walter Reed. "It affects me to a point, but it has a tremendous impact financially on the junior enlisted soldiers," he said. "After these kids get physically or mentally injured in combat, and then you expect them to take away from their personal finances to feed themselves? That is what disturbs me the most."