The displaced lovers in this vital, moving Turkish-German romance are a little bit rock 'n' roll -- and have their own sense of country. 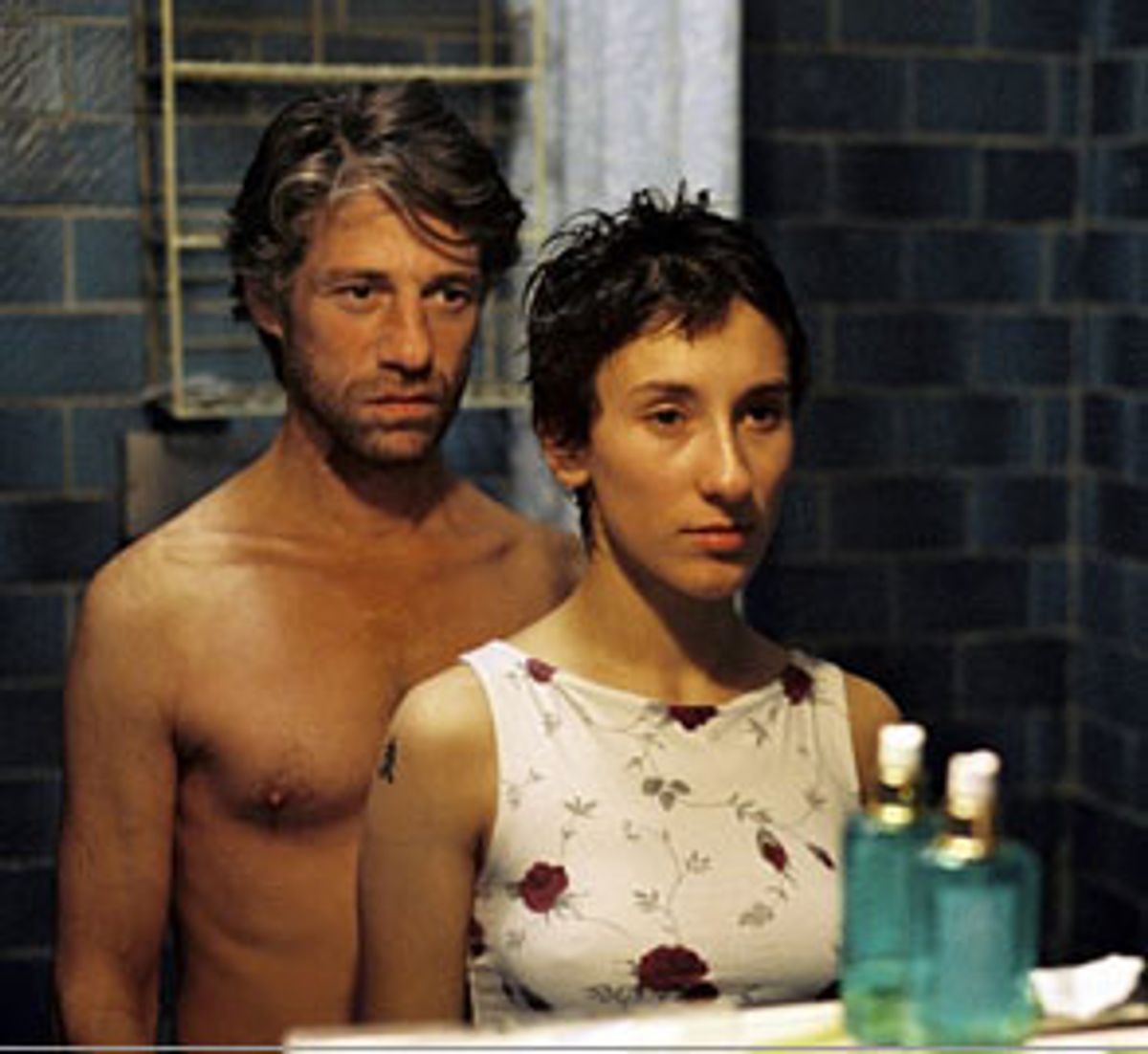 German writer-director Fatih Akin's vital and affecting romantic drama "Head On" may be set in Germany and Turkey, but it really takes place in the nowheresville of displaced lovers -- it's the kind of picture that makes the world feel smaller than we ever imagined it could.

This is the story of two unlikely (are there any other kind?) lovers, Sibel and Cahit. Cahit (the wonderful Birol Ünel) is a 40-ish Turkish-born down-and-out rock 'n' roll guy who has been living in Hamburg for most of his life -- he speaks lousy Turkish, and even then only when it's absolutely necessary: When a rigidly conservative Turkish character asks him what he did with his native tongue, as if to suggest that he'd hidden it deep inside himself in shame, Cahit shoots back, "Threw it away!"

Cahit has a lowly job collecting empty beer bottles at a club, and he's got the face of a guy who's drunk deep from the trough of rock 'n' roll, to the point where its transformative, youth-bestowing qualities have started to work in reverse: With his rough, scarred features and haunted eyes, he looks like a cross between Iggy Pop, Paul Westerberg and Billy Bob Thornton.

We don't immediately know what's troubling Cahit, but it's not wholly shocking when he accidentally on purpose drives his car into a wall. He grumbles at being forced to spend time recuperating in a mental clinic, and is further annoyed when an effervescently pretty fellow patient there, 23-year-old Sibel (Sibel Kikilli), proposes marriage to him on the basis of little more than having seen his face and recognized his last name as being Turkish.

Sibel has attempted suicide, and little wonder: Her parents, Turkish immigrants, consist of a strict, opaque father and a stern but silently sympathetic mother. Her brother, keeper of the family honor, threatens to kill her if she disgraces the family again. (Considering the scars on Sibel's wrists, the twisted logic of his threat is one of the movie's first grim, dark jokes.) Sibel, to put it simply, likes sex, possibly too much for her own good. She wants to marry a Turkish man to get the family off her back, so she can make love to whomever she wants, whenever she wants. She proposes as much to the surly, incommunicative Cahit: She'll live with him, keep house for him and cook for him, but their relationship will be strictly platonic.

Cahit is repelled at first -- he may be a drunkard, but he's a common-sense drunkard, and we can see that Sibel's request offends his ingrained sense of propriety. He also has a secret heartbreak in his past, something we can tell just by looking at him, and not just because of his constant brooding: Cahit has the kind of face you could read with your fingers -- his suffering has worn deep into every groove and crevice. But before long, and for reasons not even he can explain (to give reasons would betray the very essence of romance), Cahit agrees to help Sibel. And from there, the relationship between Sibel and Cahit takes the expected dark alleys and avenues, and a few detours that we never see coming.

The spirit of "Head On" is one of euphoric melancholia. The picture takes an unsettling tone shift in the last act, and Akin, a young director with good instincts, can't navigate that shift as gracefully as a more experienced director might: The brutality, both sexual and physical, of the movie's last third takes us by surprise because it doesn't quite jibe with the earlier mood of the picture. Ultimately, though, that section of the story intensifies, rather than dissipates, the relationship between the two lovers.

"Head On" (whose German title is "Gegen die Wand" -- a more literal translation might be "Against the Wall") is a deeply romantic picture, but not in the cushy, comfortable sense. Its sense of tragic melodrama is bound tightly with its joyousness; there's no clearer way to explain it without giving the whole game away.

Akin is a director who's sensitive to small moments, but who also understands how to shape them into a meaningful whole. I knew the picture had me in its grip when Cahit, returning from the clinic to his cramped, squalid apartment -- it's littered with empty beer cans and overflowing ashtrays, among other detritus -- drags out a box he clearly hasn't opened in years. In the box are a few pictures of a woman we don't know, and an old tuxedo. He wipes off the dusty screen of his television set, puts on the jacket, and surveys his reflection, momentarily imagining the unimaginable prospect of becoming Sibel's (or anyone's) groom. Cahit is a mess, and though he'll clean up quite beautifully later, this is the first time we can imagine him as handsome -- we see a flicker of life in his eyes that wasn't there before.

What's more, we completely understand his confusion over Sibel: She's vibrant, charming and sexually magnetic. She's also, possibly, a little nuts. (I confess there were moments, early on, where I feared this was going to be one of those depressingly madcap "We're not crazy, we're special!" movies. It's not.) But as Kikilli plays her, there's something in Sibel we can't turn away from. Her tousle of playful dark curls and her strong, noble profile at first seem like a contradiction, but the more we see of her, the more perfectly they suit her -- there's an undercurrent of seriousness, of emotional responsibility, in Sibel that even she's not aware of at first.

And Akin finds wonderful ways for Kikilli to show us Sibel's vulnerability: In one scene, the distraught Sibel shows up at the flat of one of Cahit's close friends, Seref (played cheerfully and mischievously by Güven Kirac), who has never liked her much. But something terrible has happened, and she needs a place to stay: Seref strings up a sheet, à la "It Happened One Night," to give her some privacy in his small flat. The two lie in their makeshift beds, separated by their curtain in the darkness. Sibel is sobbing uncontrollably, and Seref, desperate to soothe her from the other side of the curtain, begins singing an old Turkish song. Caught up in the moment, he adds some handclaps and vocal doodling to simulate Turkish instruments. Sibel, from the other side of the curtain, can't help laughing, and neither can we.

In their moments together, Sibel and Cahit circle each other warily -- the delight they eventually take in each other creeps up on them slowly. In one of the picture's most exuberant moments, Cahit peels potatoes in the kitchen, a cigarette dangling precariously from his lips, loud music playing on the stereo (he favors Sisters of Mercy and Depeche Mode). Sibel prances into the kitchen dressed in pants and a tiny top -- she has just gotten a belly-button piercing and she's eager to show it off. She yanks Cahit to his feet and they pogo around the tiny kitchen, Cahit bellowing, "Punk is not dead! Punk is not dead!"

"Head On" isn't strictly a culture-clash movie, possibly because for Akin (who was born in Germany of Turkish parents), the issues of displacement for any Middle Easterner living in Europe are a given -- they're almost too basic to be the subject of a movie. In a scene late in the picture, Cahit speaks of his love for Sibel with unadorned simplicity: For a few moments he speaks in English, because his Turkish fails him, and in the situation, German just won't do. He's a man caught between languages and between worlds, but in the context of the movie, those are the least of his problems.

The "chapters" in "Head On" are separated by musical numbers played by a traditional Turkish band with a woman singer; the group is filmed very simply against the vivid daytime skyline of Istanbul. Their songs consist mostly of sorrowful ballads with lyrics along the lines of "My love is the one with the beautiful eyebrows." That may be an inaccurate translation from the Turkish, or maybe not -- there are similar songs in the Western tradition, ballads from Scotland and Ireland that seize obsessively on one specific feminine detail. But the great charm of these songs is the way they sound, to Western ears, both unequivocally foreign and yet preternaturally familiar. They're pefectly suited to the movie's subtle exploration of displacement and longing -- "Head On" understands the tension between wanting to have nothing to do with the place from which you came and yet still, deep in your heart, somehow yearning for it. More than that, though, the picture also offers a loose and very expandable definition of the meaning of "home." Cahit and Sibel are each other's homeland, and the folk song they hear in each other comes from no specific country: It's one they're writing for themselves.