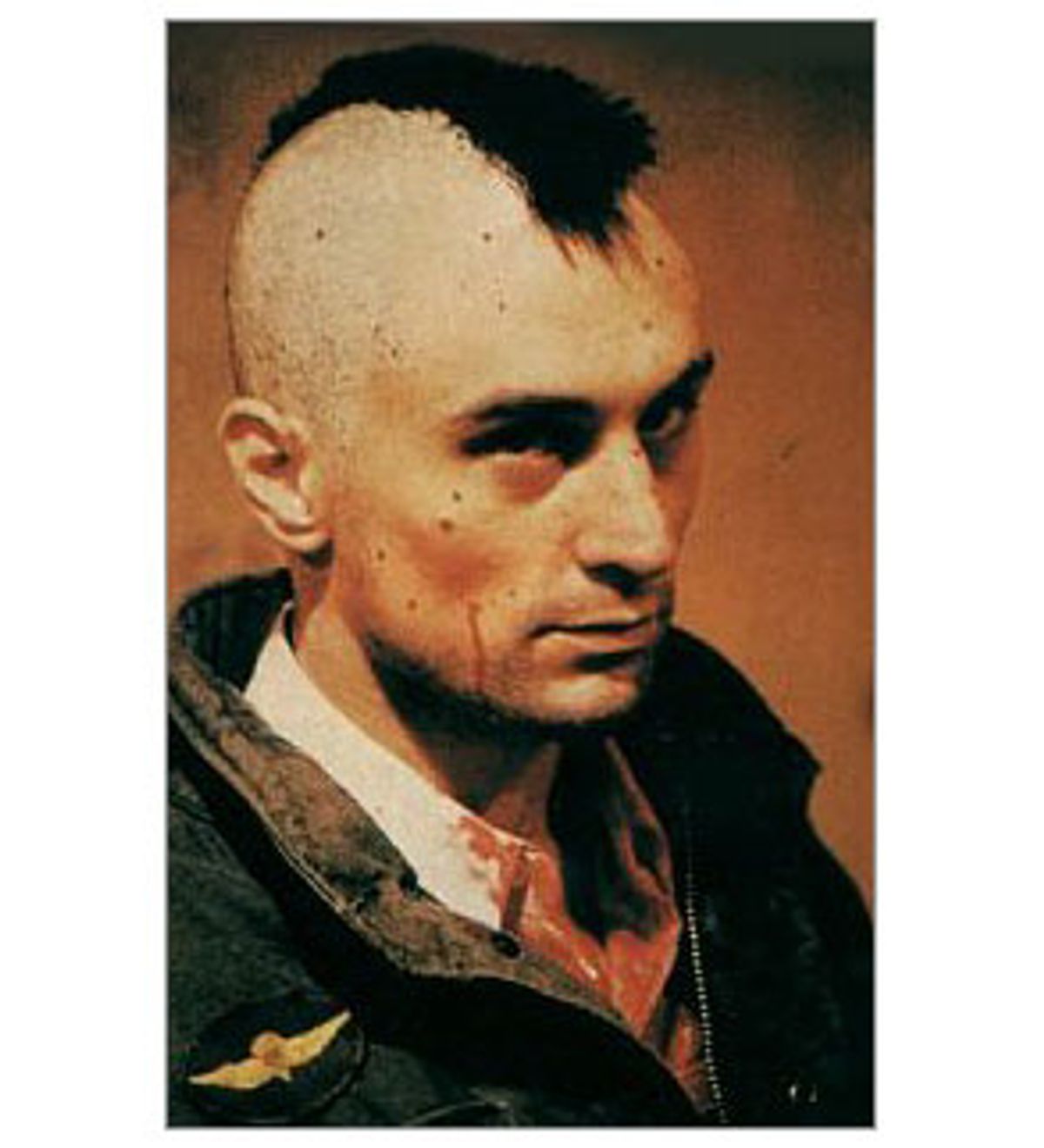 On behalf of millions of film geeks and movie buffs who know all too well that the defining characteristic of the Academy Awards is their injustice, let me begin by saying that all of us Marty maniacs have our fingers crossed that this will finally be the year your movie wins the Oscar for best picture.

Is "The Aviator" your best film? No way. By my admittedly biased count, somewhere between four and 10 of your previous works are arguably superior. This movie is also not the kind of gritty, personal filmmaking associated with you in the past. Instead, it seems to represent a subtle shift in your career that some trace to Michael Ovitz signing on as your agent some years back: toward larger-scale, more often mainstream Hollywood fare. People don't say "fuck" nearly as much, and that's a shame. And watching "The Aviator," one also doesn't get the usual sense one associates with your films -- that nobody else could have conceivably done it.

That said, "The Aviator" is a Hollywood biopic in the recent tradition of Oscar winners "Gladiator," to cite a pretty good example (also penned by "Aviator" screenwriter John Logan) and "A Beautiful Mind," to cite an overrated one. Your ode to the rise and initial descent of Howard Hughes makes for a riveting three hours, and it's got enough trademark Scorsese touches (the quick zoom, the explosion of a flash bulb filling the screen) to remind us that our favorite motor-mouthed, massively eyebrowed prodigy from Little Italy is behind the camera.

Besides, the real reason so many of us are rooting for you to finally win the Oscar this year is to right previous wrongs. We haven't forgotten that "Goodfellas," your masterful 1990 mobster epic, lost the award for best picture to that trite p.c. western "Dances With Wolves." Or then there's 1980's "Raging Bull," which a majority of critics hailed as the best movie of the entire decade, let alone that year, but which lost to the bland tearjerker "Ordinary People." And let's not forget "Taxi Driver" from 1976, which many of us believe is your greatest film of all. It lost the best picture award to "Rocky." To "Rocky"!

But now, as you appear on the verge of success -- of redemption -- there have been rumors circulating that you're about to make a big, big mistake. Reports have been circulating over the last several days that you and Robert De Niro are giving consideration to a "Taxi Driver" sequel. (After, presumably, you've completed "The Departed.") Or, as De Niro eloquently told a reporter last week, "We're planning a sequel built around the character when he is older."

Do you remember the opening scene from Robert Altman's scathing Hollywood satire "The Player"? Studio executive Griffin Mill (Tim Robbins) is listening to a movie pitch from Buck Henry (playing himself), writer of "The Graduate." Now, here's the punch line: In the film, Henry pitches a sequel to that earlier classic film. This was Altman's and screenwriter Michael Tolkin's shorthand for all that is absurd, ill-advised, and just plain blasphemous in Hollywood. Imagine, a sequel to "The Graduate"! The joke would've had the exact same bite had they used "Taxi Driver."

It's not so much that we, your most loyal fans, doubt you and your old friend De Niro are up to the task of a worthy "Taxi Driver" sequel (more on that later). It's that by making this new installment, you are inevitably changing the meaning of the original film. And that's a risk that we can't let even the movie's creators take.

It should go without saying that "Taxi Driver" is one of the greatest works in the history of cinema. It follows the classic mythological template that Joseph Campbell has described, of a reluctant hero called forth on a quest that will test his endurance, strength and even sanity. But like its unofficial cinematic inspiration/antecedent, John Ford's "The Searchers," "Taxi Driver" twists that timeless formula by making its hero more of an anti-hero. Travis Bickle is not the kind of guy you pin medals on or take home to Mom.

Not only does De Niro's sleepless, porn-obsessed protagonist come dangerously close to assassinating a presidential candidate, but he may have also been a little misguided in the heroic act that forms the movie's climax. (Iris was certainly better off at home with her parents and attending sock hops than turning tricks and popping pills, but nobody was holding a gun to her head. And don't forget, Travis killed a lot of people to "rescue" her.) But his madness vividly distills the collective moral crisis felt amid the age of Vietnam and Watergate. You filmed it all with a feverish intensity, a kaleidoscope of grimy asphalt and blurring neon. Watching it, one almost wonders if you and screenwriter Paul Schrader were going to go on a killing rampage of your own once postproduction was complete. And don't get me started on that brilliantly caustic soundtrack, the last ever composed by the late, great Bernard Hermann.

The more important point is, part of "Taxi Driver's" enduring power is that we don't know what ever became of Travis. Imagine a future for him, and you've spoiled that precious ambiguity. That tragedy has already befallen the '70s classic at the other end of the stylistic spectrum, "Star Wars," yet one can understand it of George Lucas, who (even considering "American Graffiti") never had the ability to forge a varied body of work as you have.

But also consider that the early 1970s golden age to which "Taxi Driver" belongs has already been tarnished by more than one decades-later sequel. Peter Bogdanovich may not be counted as a top-tier director anymore, but back then, he was as promising a wunderkind as you. His greatest onscreen achievement was his first: 1971's "The Last Picture Show." Well, now that classic film is forever compromised by its 1990 sequel, "Texasville." Not one of Bogdanovich's countless ascots can mask the stench of disappointment in that film. Then there's "Chinatown," which its star, Jack Nicholson, directed a lame sequel to some 16 years later: 1990's "The Two Jakes." I'm not sure Jack could handle the truth about that movie. Even Francis Ford Coppola got into the misguided sequel act -- not with "Godfather II," which is at least as masterful as its predecessor, but with the vastly inferior third chapter in the Corleone saga. It came long after the moment when his creative bulb shone brightest. (Anyone remember "Jack"?) Do you want to suffer the same fate?

Please, Scorsese-san, don't think this plea is implicitly an assumption that you don't have it in you. Clint Eastwood, your main competition for best director, can tell you that people qualifying for the AARP can still do their best work. Every one of the films you've made in the 15 years since your last widely acknowledged masterpiece, "Goodfellas," has included at least moments of greatness. "The Age of Innocence" possesses a poetic stillness and uncompromising sense of restraint that forms an ironic and striking counterpoint to the inferno of passion its characters try vainly to mask. "Casino" lingers unfairly in its predecessor's shadow, although you may have to admit there's a lesson in its predicament -- it's not unlike what even a good "Taxi Driver" sequel would face. Although "Cape Fear" isn't going to be mistaken for an art film, it is a thrilling ode to mid-century American pulp cinema with an extra dash of Pentecostal fire and brimstone. "Kundun" is mesmerizing, and it made for a refreshing, and deeply personal, departure. Oh, and the massive fight scene that begins "The Gangs of New York" is your answer to Coppola's helicopters-and-Wagner scene from "Apocalypse Now" -- not to mention a timely post-9/11 ode to your hometown.

Making a sequel to one of your most acclaimed works all these many years later has the feel of reuniting with your high school sweetheart -- it would be endearing if it didn't smack of desperation. Virtually everything you've done artistically and professionally throughout your career has demonstrated the opposite.

Actually, this feels like a quintessential Scorsese movie moment: After a journey of deep discovery and ample penance, your moment of greatness is threatened by a moral crisis. Thankfully, your movies don't always have happy endings, but we're hoping this reality-based moment does.