Ballots and bombs in Baghdad

The capital is in virtual lockdown as insurgents spread intimidation and fear. The biggest question in Iraq: Is voting worth dying for? 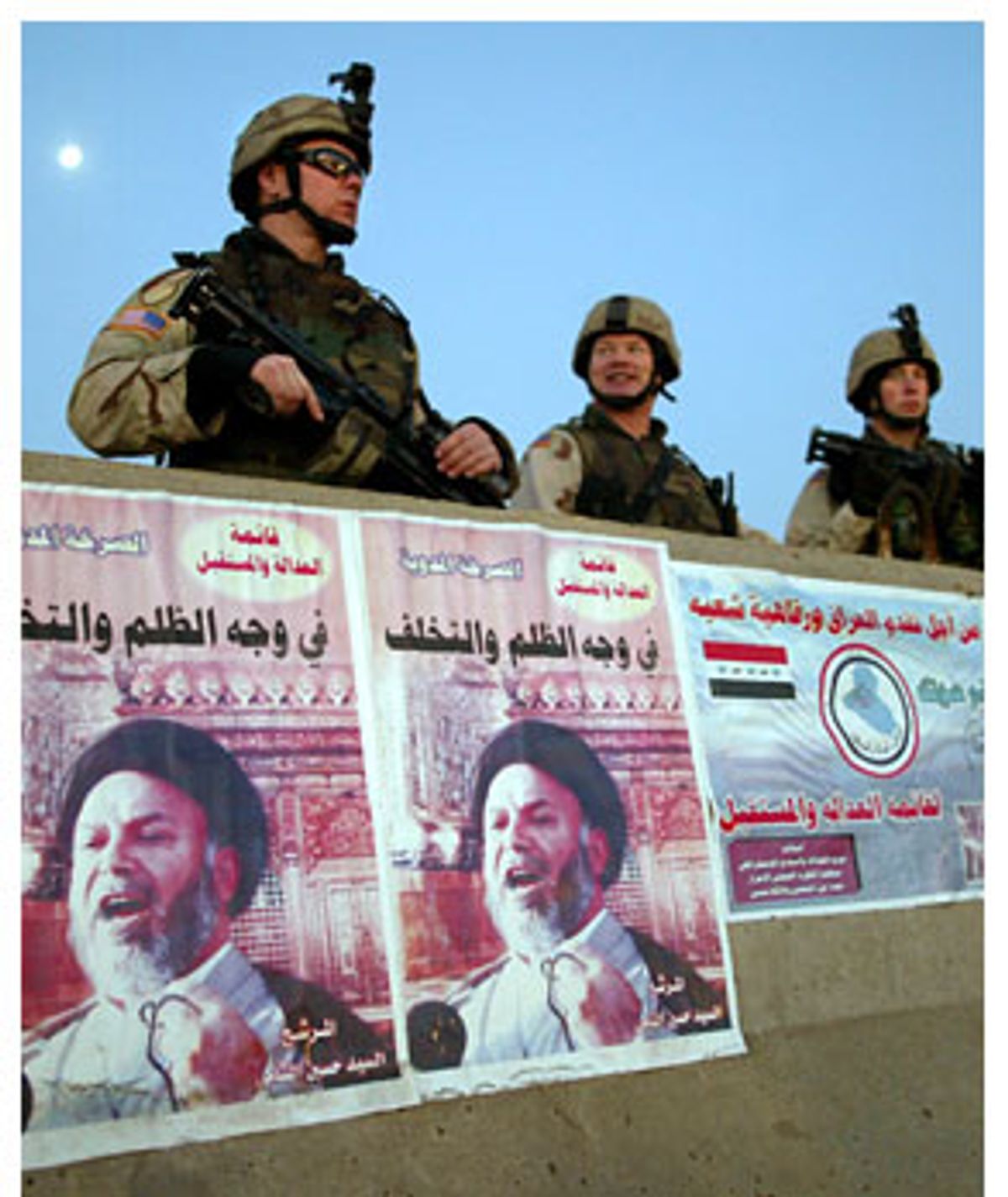 The background noise to the struggles of daily life here is fear, and that noise has reached a fever pitch heading into Sunday's national elections. Graffiti, leaflets and rumors of attacks on election day are circulating throughout the city, and the insurgents' campaign to intimidate Baghdad's voters seems to be working. "I'm afraid to take my family to the election," said Alaa al Tamimi, 47, a rotund man in a tight red sweater and glasses. "I am afraid maybe somebody will shoot me."

No one would blame him for staying home on Sunday. Insurgents have vowed to kill anyone who dares to vote, and a stepped-up series of attacks have stoked a climate of fear. On Saturday, explosions shook central Baghdad, and a rocket hit the U.S. Embassy inside the Green Zone, killing two. Insurgents attacked polling places all over the country. The government is taking extreme security precautions to protect voters brave enough to venture to the polls. Many polling place locations have been kept secret. Borders have been closed, and travel between provinces is forbidden. Curfew has been extended in many parts of the country from 7 p.m. to 6 a.m. In Baghdad, no one will be allowed to drive on city streets on election day, and many polls are located in neighborhoods -- buildings such as schools, for example -- so no one has to walk more than a few thousand yards to vote. Police will encircle polling stations, and Iraqi army units will cordon off cities.

The U.S. military, trying hard to keep an Iraqi face on the whole operation, will be waiting in the wings. U.S. and Iraqi officials say that despite the increased security, they can't assure they'll be able to stop a suicide bomber from wading into a crowd of voters. But they hope the security efforts will counteract the insurgents' fear tactics. "One of the enemy's biggest weapons is the intimidation factor," said Capt. Carrie Przelski, an intelligence planner for the 1st Infantry Division, which oversees the restive area of central northern Iraq. "So the claim can be made that the elections were illegitimate because not enough people would come out and vote because of fears about security."

It's probably a generous estimate, but officials have said half of the roughly 15 million eligible voters nationwide could cast ballots on Sunday despite widespread fear. Most people aren't even sure what they are voting for; some think they are electing a president. (They aren't.) Voter education has been poor because so few candidates can publicize their campaigns for fear of being murdered; and the media is distrusted after years of being used as a propaganda tool for Saddam Hussein.

Despite it all, the elections bring hope that maybe -- finally -- life will get better here. "We are begging God this election will succeed and put an end to this, and that the election will save us from this house," said Zeinoubah Fenghush, a 51-year-old mother of 10. As Fenghush spoke, she pointed to the patchwork tin roof and sheets her family used to create shelter from what once was the open-air cafeteria of a Baghdad sports club owned by Uday Hussein. Along with some 100 other people, Fenghush's family moved into the vacant club on the banks of the Tigris River after her husband lost his job, and they could no longer afford rent. Fenghush tries to keep her family safe by rarely leaving the shelter. "We hear about killings. I make my husband pray here and not go to the mosque because it is dangerous," Fenghush said.

All week leading up to the elections, Baghdad residents prepared for election chaos to paralyze the city. They stocked up on cooking oil, chicken, eggs and other staples. The capital's famously gridlocked traffic lightened and then evaporated, almost negating the need for stringent curfews. Baghdad has been virtually shut down; on Friday, my driver, who usually takes me out on reporting trips in the city, refused to go because of the danger. Across the street from my hotel in Baghdad's Jadriyah neighborhood, the man who runs a little shop has packed up his perishable goods and dragged the metal gate across his storefront. He had to move his mother out of her house because it was near a polling station -- the most likely target for insurgent violence.

Although the atmosphere is particularly intense right now, Baghdad's residents have grown accustomed to tortured calculations about how to get around and where and when to go. The chances of getting kidnapped or caught in a car bombing are routinely weighed against the strong desire to lead a normal life. Asiel Kalamchi, 46, has a friend who was kidnapped with his son recently for $60,000 ransom. Kalamchi worries about her own daughter being kidnapped as she spends over four hours every other day waiting in line for gas, just like everyone else has for the last two months. "I come back and keep crying from the tension. It's miserable ... This is the second year. It has to have an end," she said.

The risk of election day violence is highest in towns across central and northern Iraq with Sunni majorities who are boycotting the vote, stretching from Kirkuk in the north to Fallujah in the west to Baghdad in the middle of the country. Kirkuk's election will be closely watched as three ethnic groups -- Kurds, Arabs and Turkmen -- struggle for control of the city that sits atop one-tenth of the world's oil reserves. When I was in Kirkuk earlier this week, Mateen Jawdat, 35, a Turkman laborer working to renovate a Shiite shrine for the U.S. military, told me the chance to vote for candidates from his ethnic minority is worth risking possible attacks. "I will see what Allah has written," he said of the threat of attacks on election day while gesturing to the sky. Standing next to him was Mohammed Ahmed, 24, a Kurd. "I am not afraid. It is an Iraqi duty [to vote]," he said.

Amid the heightened fear and tension are the daily annoyances that have mounted since war began here nearly two years ago. Standing in gas lines for hours, or even days, is commonplace. Two weeks ago, the water went out in Baghdad because a water line was bombed, although water seems to be slowly returning. Electricity is only available a few hours a day, so Fenghush, the mother of 10, bought a kerosene heater, but now she can't even afford the fuel for it. "Kerosene is very expensive and we don't have money to buy this, so sometimes I put gas for a truck in my heater. It's cold at night." The story is the same throughout much of the country, and Iraqis will bring their frustrations to the polls -- as well as a deep sense of angry disappointment with the U.S. for failing to make good on promises of a better life.

Many here harbor suspicions that the U.S. has designs on Iraqi oil and wants to keep the country unstable to keep control over it. We "thought the Americans would come and build Disneyland here. I thought there would be good jobs for everybody, but I think the Americans were slow to take actions," said Ahmed Salam, a 42-year-old owner of a travel and tourism business. Alaa al Tamimi is more blunt. "They blew up a major water [line]. Iraq is the size of one state in America," he sputtered, leaning forward and growing louder. "Why can't the U.S. Army guard it? There are no rules. There is no law. This is freedom?" Despite their anger, most Iraqis don't want the U.S. troops to leave, at least not yet. It's not from any affection for America. No one likes the idea of being occupied or having Humvees zooming through their streets and helicopters screaming overhead. But many fear the country is so fragile that total anarchy will ensue if U.S. soldiers suddenly pack up and go home. They blame the U.S. for creating a mess but are grudgingly resigned to the fact that they need it to stay to clean it up.

Ideally, the cleaning up will get started with the national election, which is intended to eventually lead to an autonomous government for Iraq. It's a complicated process: On Sunday, a 275-member national assembly will be chosen. That group will choose a president and two deputies. The president and deputies will choose a prime minister, with the approval of the assembly. Then the prime minister will choose a cabinet, again with the approval of the assembly. The assembly will then set to writing a constitution to replace the temporary one drawn up last spring. The constitution will pave the way for elections for a new government to be held by the end of this year and mark the beginning of a truly sovereign government run and chosen by Iraqis. Also on Sunday, Iraqis will vote for local provincial councils that will act much like a state government in the U.S. At least that's the plan.

Military planners with the 1st Infantry Division say turnout could be as low as 40 percent in towns like Samarra, where an army battalion and police force have disintegrated under insurgent attacks in the last nine months. Turnout could hit 60 percent in Kirkuk, where residents feel they can't afford to cede control to other ethnic groups. And few are expected to vote in western cities like Fallujah and Ramadi, which were insurgent strongholds until a major siege by Marines in November and still bristle with anger over the war and occupation. The south, the stronghold of Shiite Iraqis, will likely see some of the highest turnouts from Shiites who have been told they have a religious duty to vote.

Whatever results Sunday's vote yields, and it will take at least two weeks to tally, the elections will change the face of Iraq. The vote could mark the beginning of a civil war between Shiites, who will finally exercise the power of their majority, and the Sunnis, who will officially be deposed from the ruling status they've enjoyed for decades. It could produce a reasonably democratic government guided by Islamic principles. Or the insurgency and violence could continue to grow under a weak and divided government, and an iron-fisted ruler could emerge, much like the regime the U.S. toppled in 2003.

Iraq hasn't known an extended period of peace and freedom in a century. Every generation of Iraqis alive today has lived through several revolutions, occupations and wars. After the promise of America revitalizing the country faded with two years of struggles for basic services and security, most Iraqis say they'd rather have reliable water supplies than a vote. But at the same time, the chance that the election can defy the weight of past failures here and bring stability to a country searching for normal life again is too tantalizing for many Iraqis to reject outright.

Others suspect hope is just playing the tease again. Iraq is holding its breath. "We have spent a long time, and now maybe there is only a small time to wait" for a better life, said Fenghush.

Jill Carroll is a freelance writer working in Baghdad.