Millions go to the polls in Iraq's historic elections despite deadly insurgent attacks. 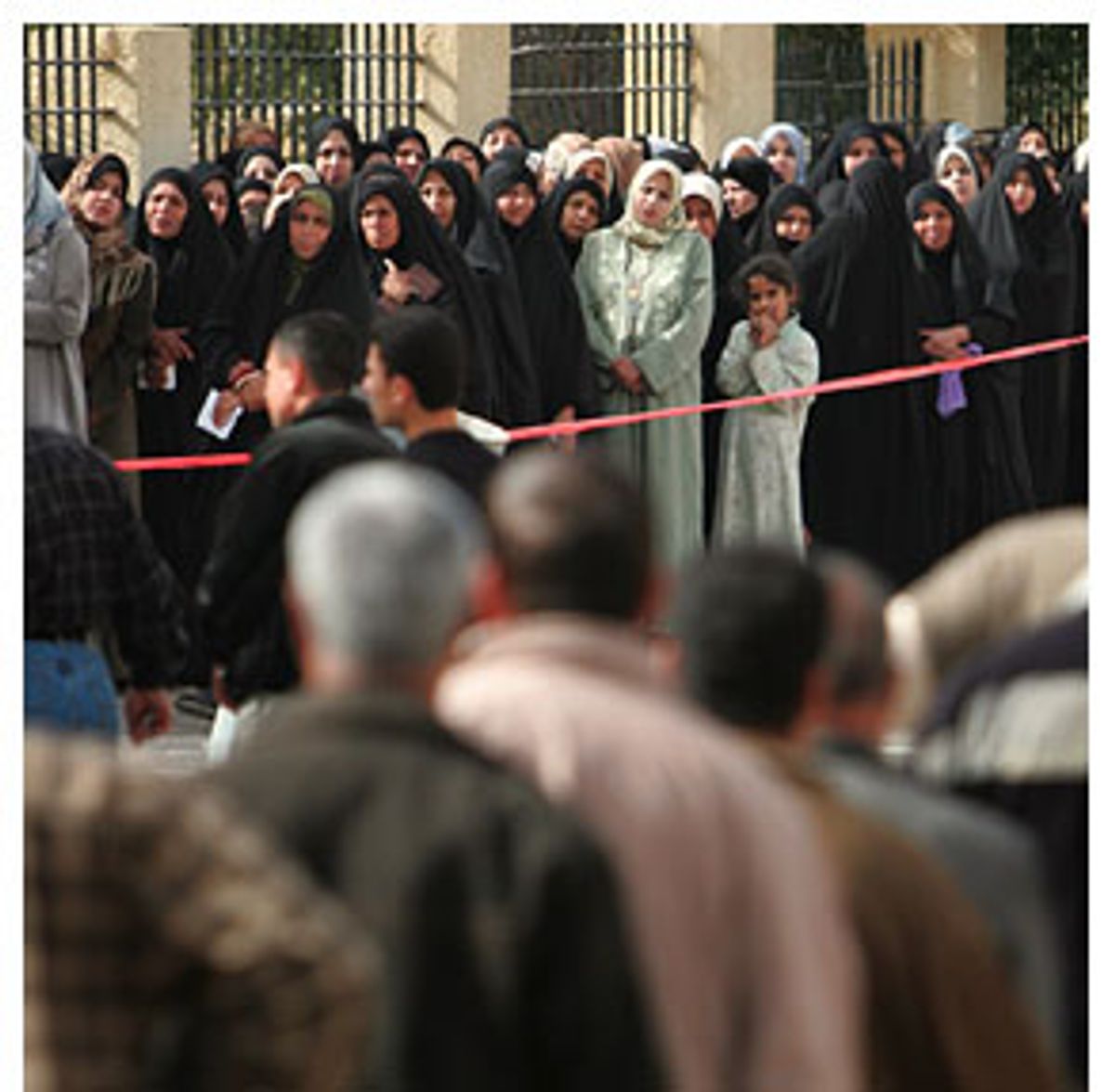 Iraqis defied threats of violence and calls for a boycott to cast ballots in Iraq's first free election in a half-century Sunday, and insurgents seeking to wreck the vote struck polling stations with a string of suicide bombings and mortar strikes, killing at least 44 people, including nine suicide bombers.

Women in black abayas whispered prayers at the sound of a nearby explosion as they waited to vote at one Baghdad polling station. But the mood elsewhere was triumphant, with long lines in many places in the city: civilians and policemen danced with joy outside one site, and some streets were packed with voters walking shoulder-to-shoulder toward polling centers.

"This is democracy," said Karfia Abbasi, holding up a thumb stained with purple ink to prove she had voted.

But polls were largely deserted throughout the day in many cities of the Sunni Triangle north and west of the capital, particularly Fallujah, Ramadi and Beiji. In Baghdad's mainly Sunni Arab area of Azamiyah, the neighborhood's four polling centers did not open at all, residents said. In Samarra, north of Baghdad, stations were empty for hours, but later hundreds of people showed up.

Several hundred people turned out to vote in eastern districts of the heavily Sunni city of Mosul -- Iraq's third largest city and a center for insurgent violence in past months. But in western parts of Mosul, clashes erupted between guerrillas and Iraqi soldiers.

A low Sunni turnout could undermine the new government and worsen tensions among the country's ethnic, religious and cultural groups.

Officials said turnout appeared higher than expected, although it was too soon to tell for sure. A few hours before polls closed at 5 p.m., one Iraqi official, Adel al-Lami of the Independent Electoral Commission, said 72 percent of the 14 million eligible voters cast ballots but offered no overall figure of the number who participated.

Insurgent attacks started within two hours of the balloting's start, and over the day Baghdad saw eight suicide attacks, mostly against polling sites, using bombers on foot with explosives strapped to their bodies since private cars were banned from the streets.

In one of the deadliest attacks of the day, a bomber got onto a minibus carrying voters to the polls in Hillah, south of Baghdad, and detonated his explosives, killing himself and at least four other people, the Polish military said.

Deadly mortar volleys hit Baghdad's Shiite neighborhood of Sadr City and struck voters at several sites in Balad, and Kirkuk in the north and Mahawil south of the capital. Across the country, at least 35 people and nine suicide bombers were killed.

A Web site statement purportedly from Abu Musab al-Zarqawi's group claimed responsibility for election-day attacks, although the claim could not be verified. The Jordanian militant, whose group is allied with al-Qaida, is said to be behind many of the suicide car-bombings, kidnappings and beheadings of foreigners in Iraq, and his group vowed to kill those who ventured out to vote.

Shiite Muslims, estimated at 60 percent of Iraq's 26 million people, were expected to turn out in large numbers, encouraged by clerics who hope their community will gain power after generations of oppression by the Sunni minority.

The election will create a 275-member National Assembly and 18 provincial legislatures. The assembly will draw up the country's permanent constitution and will select a president and two deputy presidents, who in turn will name a new prime minister and Cabinet to serve for 11 months until new elections are held.

Casting his vote, Interim Prime Minister Ayad Allawi called it "the first time the Iraqis will determine their destiny."

Secretary of State Condoleezza Rice said the election was "not perfect" but was "going better than expected."

"What we're seeing here is the voice of freedom," she said on ABC's "This Week."

The election is a major test of President Bush's goal of promoting democracy in the Middle East. If successful, it also could hasten the day when the United States brings home its 150,000 troops. More than 1,400 members of the U.S. military have died since the beginning of the Iraq war in March 2003, including a Marine killed in combat Sunday in Iraq's restive Anbar province.

Voter turnout was brisk in Shiite Muslim and mixed Shiite-Sunni neighborhoods of Baghdad, and U.S. officials said some stations ran out of ballots. Even in the small town of Askan in the so-called ``triangle of death'' south of Baghdad, 20 people waited in line at each of several polling centers. More walked toward the polls.

Rumors of impending violence were rife. When an unexplained boom sounded near one Baghdad voting station, some women put their hands to their mouths and whispered prayers. Others continued walking calmly to the voting stations. Several shouted in unison: "We have no fear."

"Am I scared? Of course I'm not scared. This is my country," said 50-year-old Fathiya Mohammed, wearing a head-to-toe abaya cloak.

At one polling place in Baghdad, soldiers and voters joined hands in a dance, and in Baqouba, voters jumped and clapped to celebrate the historic day. At another, an Iraqi policeman in a black ski mask tucked his assault rifle under one arm and took the hand of an elderly blind woman, guiding her to the polls.

In Ramadi, U.S. troops tried to coax voters with loudspeakers, preaching the importance of every ballot. The governor of the mostly Sunni province of Salaheddin, Hamad Hmoud Shagti, went on the radio to lobby for a higher turnout. ``This is a chance for you as Iraqis to assure your and your children's future,'' he said.

Security was tight. About 300,000 Iraqi and American troops were on the streets and on standby to protect voters, who entered polling stations under loops of razor wire and the watchful eye of rooftop sharpshooters.

Final results of the election will not be known for seven to 10 days, but a preliminary tally could come as early as late Sunday.

A ticket endorsed by the country's leading Shiite cleric, Grand Ayatollah Ali al-Sistani, is expected to fare best among the 111 candidate lists. However, no faction is expected to win an outright majority, meaning possibly weeks of political deal-making before a new prime minister is chosen.

The elections will also give Kurds a chance to gain more influence in Iraq after long years of marginalization under the Baath Party that ruled the country for 34 years.

"This proves that we are now free," said Akar Azad, 19, who came to the polls with his wife Serwin Suker and sister Bigat. In addition to the assembly and provincial votes, Kurds are also choosing a regional parliament for their zone of northern Iraq.

Iraqis in 14 nations also held the last of three days of overseas balloting on Sunday, with officials in Australia extending polling station hours because of an earlier riot and bomb scare.

U.N. Secretary-General Kofi Annan called Sunday's balloting "the first step" toward democracy. "It's a beginning, not an end," he said.

The chief U.N. adviser to Iraq's election commission, Carlos Valenzuela, also said turnout seemed to be good in most places.

"These attacks have not stopped the operations," Valenzuela said.

Asked if reports of better-than-expected turnout in areas where Sunni and Shiite Muslims live together indicated that a Sunni cleric boycott effort had failed, one of the main groups pushing the boycott seemed to soften its stance.

"The association's call for a boycott of the election was not a fatwa (religious edict), but only a statement," said Association of Muslim Scholars spokesman Omar Ragheb. "It was never a question of something religiously prohibited or permitted."