Here's what the president didn't tell you in his State of the Union address: His plan to privatize Social Security will be hugely expensive and will make the average worker worse off. 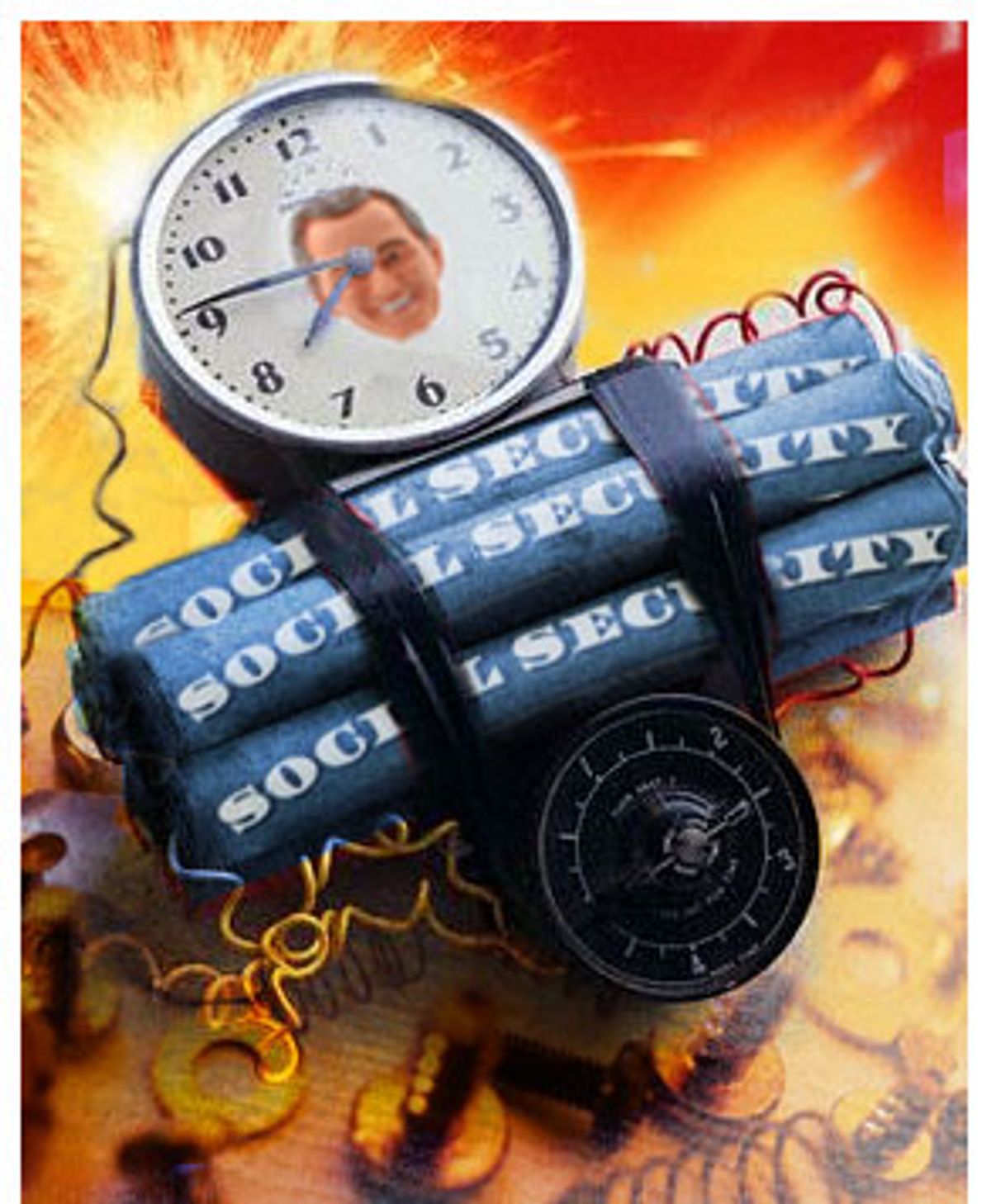 My ears perked up for a moment while watching President Bush's State of the Union Wednesday night. As expected, reforming Social Security was the centerpiece of the president's domestic message. But he momentarily sounded open to persuasion. "All these ideas are on the table," President Bush said, after running off a litany of ways, some sensible, to balance Social Security's future commitments with its future revenue. "I will work with members of Congress to find the most effective combination of reforms."

A moment or two after Bush's declaration, however, he returned to form. We will not consider raising payroll taxes to solve the problem, he declared. But without raising taxes, the nation is left with only one side of the equation to tinker with.

Indeed, President Bush's remarks mentioned only ways to reduce benefits -- restricting payments to the wealthy, raising the retirement age, discouraging early retirement. In fact, when you do the arithmetic, unless the president raises taxes somewhat, you find he is going to have to cut your benefits by a lot. He neglected to say that directly. Press reports said his fellow Republican urged him not to.

He also neglected to say clearly that privatization, which will allow workers to divert part of their payroll taxes into private investment accounts run by Wall Street firms, is not going to change that one bit. Not in the first five or six decades, anyway, and depending on the plan, perhaps never. In fact, in the near run, it will only make matters worse. The government will have to borrow a couple of trillion dollars to compensate for the diversion of money into private accounts. There was no mention of how to finance that, which leaves the president with a perfect batting average so far. He has never discussed how he would deal with the transition costs. At least, in the only real bit of news, he said he will not propose implementing the plan until 2009.

Let's take a step back to understand what the nation's choices truly are. Because the number of retirees will rise dramatically as baby boomers in coming years reach 65 (the new Social Security retirement age is 66 and rising), payroll taxes paid by those who are working will eventually not be enough to pay the Social Security recipients.

President Bush enjoys saying that as a result Social Security is on the road to bankruptcy. We will run short of our needs by a couple of hundred billion dollars in 2027, for example, he said Wednesday.

To most of us, Social Security bankruptcy conjures up images of dereliction of duty and means the system will simply disappear. "If you've got children in their 20s, as some of us do, the idea of Social Security collapsing before they retire does not seem like a small matter," the president said in measured tones Wednesday night. "And it should not be a small matter to Congress."

Far from being derelict, Social Security is easily the best run government program in America. And Social Security will neither collapse nor disappear, even if the nation does nothing to reform it. The gap between expected revenues and outlays will come to about 2 percent of the nation's wages over the next 75 years, or less than 1 percent of the nation's gross domestic product. That means the nation can cover the imbalance with a 2 percentage point increase in payroll taxes, from the current 12.4 percent, now equally shared by employers and employees.

A massive increase in taxes? That is how the president characterizes it.

Even if the nation does not raise taxes, the Social Security Administration projects that the system will still be able to pay 70 percent or so of benefits due. Hardly a collapse.

But there are genuine concerns. For years now, baby boomers and others have been paying more in payroll taxes than has been needed to meet the needs of retirees. The federal government has of course spent the surplus, but it has placed Treasury bonds in a trust fund to be paid off when needed. And needed they may well be around 2018 when, as the president noted, Social Security payments will begin to exceed the payroll taxes collected.

Will the bonds be paid off? Of course they will. The Treasury will not renege on its obligations. But there will also be pressures on the budget, and Democrats are too flippant about this. If the nation is still in deficit, other programs may have to be cut or the Treasury may have to borrow more in the financial markets.

When the trust fund is eventually run down -- the Social Security Administration estimates that will happen around 2042, but some think it won't happen until the 2050s -- the system, based on current projections, will surely need new sources of revenues or cuts in benefits paid.

But is privatization the answer to these shortfalls? Unfortunately for President Bush, not according to studies that have already been done by the Social Security Administration, the Congressional Budget Office and independent analysts. There is no reasonable privatization plan that can make Social Security solvent over the next 75 years, if ever, without significant cuts in benefits for typical workers.

The reason that privatization is no panacea, even if stocks pay significantly better returns over time than the present Social Security system does for an average worker, is that it will take too long for these accounts to build into a meaningful nest egg. In fact, diverting Social Security taxes to private accounts will hasten the system's insolvency.

Second, investing in the financial markets is risky. First, stock and bond markets may not do as well in the future as they did in the past. Given how high stock prices are today, many economists think they probably will not. Second, many individuals will invest poorly and not earn average returns, often by a long shot. Third, just when you retire, the markets may be way down.

The best way to see how privatization would really work is to examine one of the plans outlined in detail in late 2001 by President Bush's own Commission to Strengthen Social Security, under the late Sen. Daniel Patrick Moynihan, who President Bush mentioned Wednesday night, and Richard D. Parsons, chief executive of Time Warner.

The forthcoming Bush proposal looks as if it will be based on this plan. It would allow individuals to divert up to four percentage points of Social Security taxes (or about one-third of a worker's total wages paid over to Social Security )into private accounts, as the president said in his speech.

Here's how that works. The current Social Security system replaces a certain amount of a worker's wages -- say, about 40 percent for middle-income workers. As wages rise, so do benefits. But wages in fact rise much faster over time than do prices. Thus, under the commission proposal, benefits linked only to price increases would ultimately be much lower than the present Social Security system would pay.

How much lower? For a typical one-earner family, guaranteed benefits would be about 75 percent of the level promised by the present system in 2042 and, stunningly, only half of the level in 2075. This is the dirty little secret of privatization.

The president seems to think that adding gains due to investment in private accounts will excite younger people. But even if a person earned, say, 4.5 percent a year in a portfolio of stock and bonds over 30 years, and paid a minimal investment management fee to boot, returns for a typical one-earner couple whose breadwinner retires in 2042 will still be less than the benefits promised under the present system.

The eyes may be about to glaze over, I know. But just one last technical point. Many of those who opt for private accounts will not earn 4.5 percent a year. Many and perhaps most will earn just 3 percent a year or so, and even less. Under these circumstances, benefits including those gains from private accounts will actually be lower down the road than if even nothing were done to reform the current system.

Let me say that one more time, because it is a stunner. If the nation makes no reforms, the reduced benefits -- down to about 70 percent of promised levels -- will still be higher for the typical retiree than benefits will be under the likely Bush administration privatization plan.

The president goes blithely on, however. He may believe more in the certainty of equity market returns than he should. No doubt, ideology also has a part. For all the president's praise of Social Security Wednesday night, it has always bothered those who favor minimal government.

There are also practical political considerations. The success of Social Security has been a political advantage for the Democrats. Why not take that away from them?

And, of course, it will be a boon for the Street. The president argues that the system will carefully monitor managerial fees. But Austan Goolsbee, an economist at the University of Chicago, computed last fall that even modest fees will accumulate into an enormous amount over 75 years. In fact, the present value of those fees is $940 billion, or about one-fourth of the cumulative gap between Social Security's income and outgo over those 75 years.

Goolsbee may have overshot the mark some, especially if government picks up some of the administrative expense (which will cost taxpayers, anyway). But there is little doubt the fees will mount, especially if individuals are given some choice in their investments and Wall Street has the incentive to attract them.

Teresa Ghilarducci, an economist from Notre Dame, thinks there is another, even more compelling lure for Wall Street. As baby boomers retire, they will stop buying stocks on balance and start selling them. So the Street needs new sources of purchasing power to hold up stock prices. What better than privatization?

There is a sensible course. On Wednesday, President Bush argued that the nation should fix Social Security once and for all. But there is no forecasting the future that far in advance with certainty. It is entirely possible the economy will do better than expected over the next 50 to 70 years, wages will rise rapidly, and payroll taxes will more than exceed expected Social Security outlays.

Experts like Robert Ball, the former Social Security Administration official, and Alicia Munnell, a former Clinton economist now at Boston College, argue that the nation should begin to make small changes now. Benefits should be somewhat reduced and taxes raised only slightly. In 10 years or so, the nation can make another adjustment, depending on the outlook at that point.

This is not the ideological bold stroke the president is looking for. It will provide no long-term political blow to the Democrats, nor will it delight one's Wall Street friends. It will probably not make history, either. But it is the best way to solve the nation's Social Security and generate confidence in the system.

Now the president is off on a tour to sell his Social Security ideas. If he ultimately wins, it will be a tragedy. It will transform Social Security from a guaranteed retirement benefit to a gamble. Not all will lose, but many will. We could do little worse for our children. Fortunately, I think this is one battle the president will lose.