Dermot Mulroney single-handedly scoops up this movie -- in which Debra Messing plays a woman who hires an escort to take her to her sister's wedding -- and carries it across the threshold. 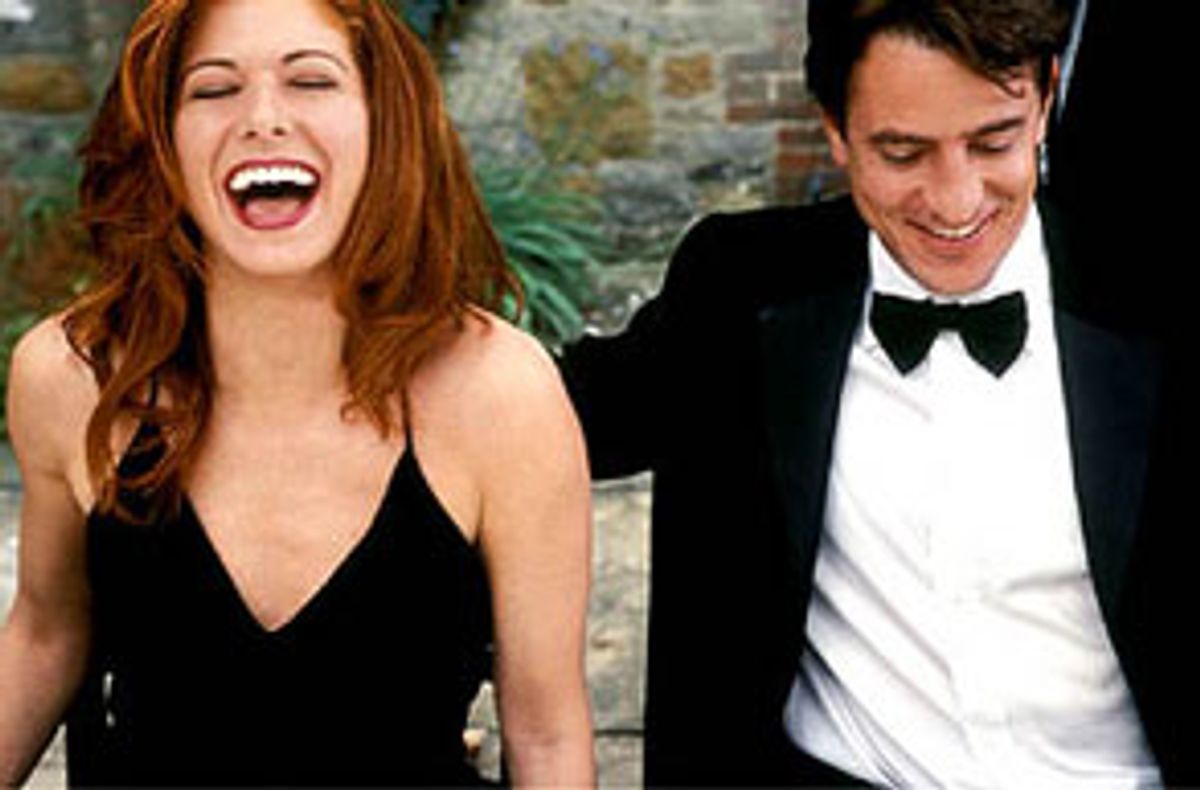 There's something cheerfully disreputable about the idea, if not the execution, of "The Wedding Date." Debra Messing plays Kat Ellis, a single New Yorker who's still smarting after being dumped by her English fiancé, Jeffrey (Jeremy Sheffield). Unfortunately, Jeffrey is going to be the best man at Kat's sister's London wedding, and Kat doesn't want to show up dateless, partly out of personal pride and partly because she feels the need to meet her family's unrealistic expectations of who she ought to be. So she hires an escort, Nick (Dermot Mulroney), not just to be her date but to give the impression that he's madly in love with her.

Director Clare Kilner ("How to Deal") gives the first half of "The Wedding Date" a breezy, affable feel. (The story is based on a novel by Elizabeth Young called "Asking for Trouble"; the screenplay is by Dana Fox). Kilner doesn't waste a lot of time setting up the story or introducing her characters. Instead of giving us the usual tired windup -- for example, showing Kat moaning about her single status, and consulting, over cosmopolitans, no fewer than eight girlfriends -- Kilner works in a kind of jazzy shorthand. The movie opens with shots of pages' worth of newspaper ads marked up with circles and arrows, since Kat has already decided (well before the movie started, thank God) that she just needs to hire the right man for the job. Her life is already in progress as the picture begins, which makes it seem less like a construct set up purely for our entertainment. All movie lives are, of course, constructs, but Kilner's approach feels refreshingly modern.

Kat's moral qualms about paying a guy for companionship -- not that she should have any, if we're talking about a consensual arrangement between adults -- aren't addressed until later in the picture, and even then, the movie finesses them deftly and with a fair degree of thoughtfulness. (The original deal Kat makes with Nick doesn't involve sex, but the movie doesn't shy away from the fact that these two are destined to sleep together.) Yet somewhere along the way, "The Wedding Date" begins to feel like the product of reasonably good intentions that failed to gel. The drama that's manufactured for the characters -- the big trauma that they have to scramble through before we're free to go home -- seems muddled and pointless, the kind of thing that a few brief, honest words uttered by a sensible person would have prevented in the first place. (While that's often the case with romantic-comedy plots, there are ways to make the mixups and misunderstandings more potent than they are here.)

The big problem, though, may be that any romantic comedy rests largely on the shoulders of its leads. And here, two of those shoulders belong to Debra Messing. Messing is pretty enough, if pretty is what you're after, and she wears clothes well (she gets lots of costume changes, although most of her outfits consist of bland-looking cocktail dresses in Paas colors). But her timing always feels calculated -- I began to imagine that I could see her eyes shifting just as she's getting ready to fire off a zinger. She's got a 100-watt smile, but it seems to be activated by a switch, as if merely disguising the wiring were the better part of acting.

The movie has a jordan-almond nugget in the middle, a kernel of self-helpy wisdom: Kat just has to learn to believe what an incredible woman she is, and then others will believe it, too. Her alleged incredibleness may very well be there, but as Messing plays the character, we can't be sure of it -- by the movie's end, Kat's dazzling greatness has achieved the stature of a Yeti or the Loch Ness monster, a legend we're not totally sure we should buy. She sure does smile a lot, which, in certain romantic equations, must count for something.

Strictly speaking, Dermot Mulroney is the movie's only genuinely romantic lead. And he's so good that he nearly carries "The Wedding Date" single-handedly. The first glimpse we get of him is not of his face but of his shoes -- we see him from the legs down, zipping into a taxicab, clad in black trousers and hip-looking neat black loafers. (We know we're in trouble when his shoes make a bigger impression than Messing's do.) Later, when we finally see Mulroney's face, we get what we've been waiting for: His features are handsome in a way that's neither too soft nor too rugged. He represents the perfect intersection of civilization and wilderness -- untamed Alaska and urbane Paris in just one guy.

Mulroney is a stealth actor: Whenever you see him in a picture, you're not just reminded of how good he almost always is -- you have the sense of discovering it for the first time. That may be because, for me, at least, his stony masculinity can be a little off-putting at first. But he's the kind of actor who warms up as you watch him -- he has a gift for drawing secrets out of his characters gradually, instead of giving the game away in the first few scenes. Early on, Kat announces to Nick that she finds the idea of having sex for money "morally repugnant." Nick fixes her with a stare that stops her cold, a look that says not "Don't insult me" but "Don't condescend to me." In another scene, she marvels at how easily he can charm every woman (of any age) in a room, just by being himself. "Who says I'm being myself?" he asks her, leaving the question hovering in the air like smoke.

Mulroney has no use for little-boy hurt feelings in this performance; he's complicated in a way that Messing can't come close to matching. But he's so believable as a romantic lead that he almost manages to sweep Messing along, too. He looks at her face with so much unflinching certainty that we find ourselves peering at it too: If he can see that special something, then surely it must be there. We find ourselves taking his word for it; in the end, he steals away with our better judgment tucked safely in his breast pocket. Now that's acting.