The election impressed the world, but now the Iraqis have to learn to share power. And there's still a savage firefight every night in my Baghdad neighborhood. 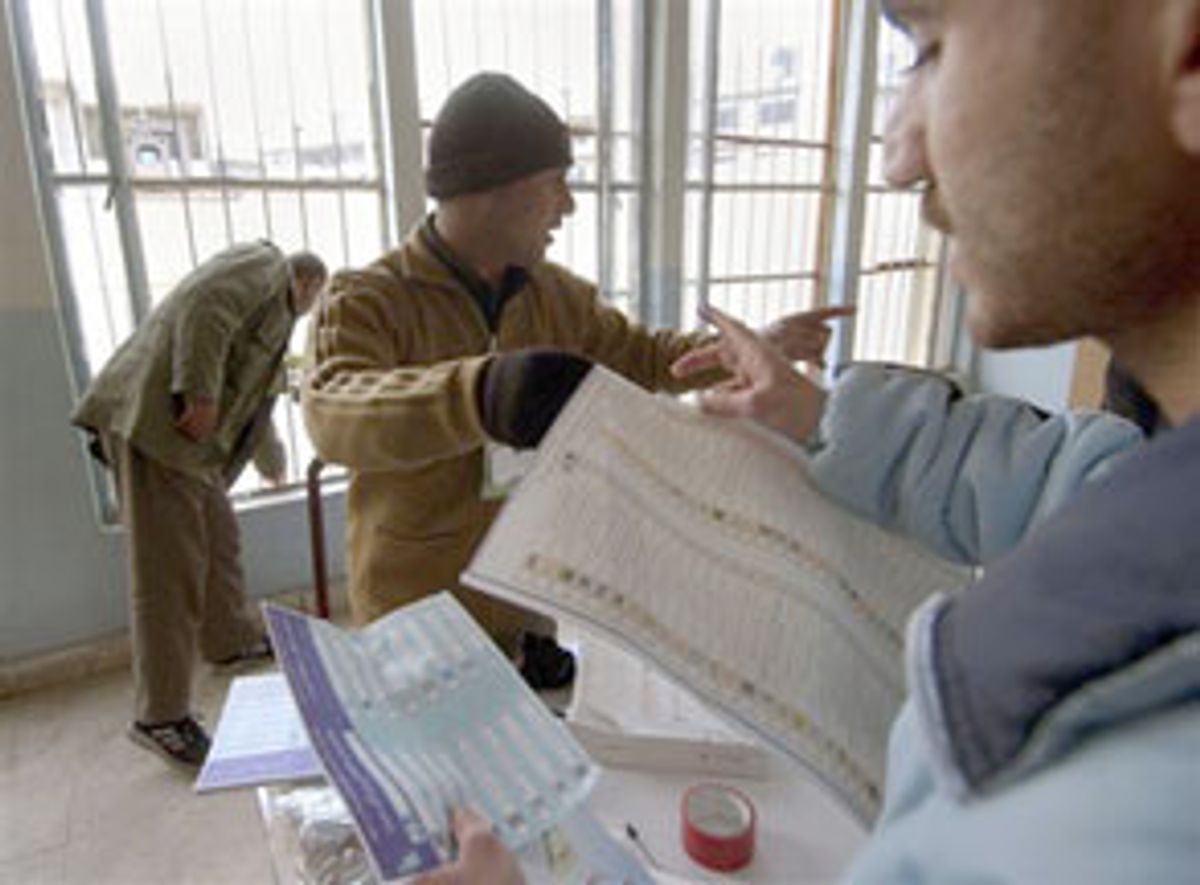 Sunday's vote was a huge event for Iraq. The performance of the Iraqis in putting aside their understandable cynicism toward their "liberation" deserved its laudatory headlines. But it was only a good first step. It may turn out that it was easier for Iraqis to risk mortar rounds than to take the next step: accepting that sometimes your candidate loses.

"Now the government is from us, the Iraqi people," says Nadeem Zubaydi, a 45-year-old shopkeeper in the Shiite neighborhood of Karada. "Before [the Governing Council] was not legitimate, because they came from outside Iraq, with the Americans."

His neighbor Hirsham, a cobbler, says that he and other Iraqis will respect the election's results even if their candidate or ticket does not win. "I will not be upset if my candidates do not win," he says. "With the winner, the people around him will have to discuss his decisions. And maybe say no and stop him from doing things."

The right to criticize his new government seems to mean most to Nadeem and other Iraqis. "When I talked before, I couldn't say exactly what I wanted," he continues. "Now I am sure that if I complain, the new government can find the solution."

But there is a huge caveat: Nadeem voted for the Shiite ticket -- the winning one.

The small number of votes counted so far show a commanding lead for the religious Shiite political coalition led by Abdul Hakim Aziz. This is disappointing news for secular Iraqis and supporters of interim Prime Minister Ayad Allawi, who are hoping that the Aziz ticket fails to muster a plurality of the new 275-seat Legislature, so they will be included in a coalition government. Final results could come next week.

The immediate benefit of the election was that huge segments of the Iraqi population embraced the possibility they could elect a government. This raises hopes that they will support this yet-unseen government in its fight against the nihilist insurgents and terrorists who are intent on stopping a successful government from stabilizing Iraq. Much has been written about the motivations of the insurgents and their foreign jihadi allies, but the insurgency has always had a weakness: its lack of a clear goal.

Whether the Sunnis will join the democratic process is unclear. Even the more moderate Sunni organizations did not encourage Sunni participation, and a prominent Sunni group, the Association of Muslim Clerics, maintains the elections were illegitimate. Nonetheless, the association has offered to work with the new government to write a constitution.

As Iraq forms a new government, the big question is whether that government will be a tyranny of the majority, or whether it will represent all the factions in the country. Will the government receive support only from those who voted for it, or will other Iraqis also accept its legitimacy?

A few weeks ago, I would have given a skeptical answer to that question. The election has made the picture more optimistic, but major hurdles remain. In the Middle East, family and tribal loyalties supersede abstract concepts like democracy, and the history of the region contains few examples of magnanimous victors. Considering Iraq's history -- the Sunnis' crushing of the Shiites in Karbala 1,300 years ago, the British occupation, the succession of corrupt monarchs, the Baath regime, sanctions, and an American occupation rife with almost petty score settling against former Baathists and the Iraqi army -- it isn't surprising that Iraqis sometimes seem programmed to expect the worst.

Abu Wamheeth, 62, comes from the perfect demographic for the new government. He's a Ph.D. in mechanical engineering, a former general in Iraq's missile programs, and a businessman who lived in the United Kingdom for eight years, returning to Iraq in 1992 only to be purged from the military.

He's also an aggressively secular Shiite and such a fervent supporter of the American invasion and occupation that he gets dewy-eyed talking about it. But he is deeply worried about Aziz's ties to Iranian religious fundamentalism, concerned about corruption, and doubtful that his countrymen will be able to work together politically.

"This man, Aziz, does not like Iraq," he says, pointing out that Aziz and his men fought against Iraq on behalf of Iran in the 1980s. "Even as the entire world was forgiving Iraq's national debts, Aziz said Iraq still owed Iran billions of dollars from our war. He also does not really represent the Iraqi view of religion. We are not like the Iranians. We are a moderate Shiite people. That is why we have always disliked Iran."

I asked Abu Wamheeth how much damage the new government could really do, considering its only tasks are to fight Sunni insurgents and draft a constitution before being replaced next December in the real elections.

"These Shiites will pack the ministries with their supporters and alienate the rest of Iraq," he says, echoing a fear expressed by many secular Iraqis. "And Iraqis will begin to complain when they see certain Shiite families getting all of the jobs, as the Sunni tribes in Anbar [the restive province that includes Ramadi and Fallujah] did under Saddam. You cannot forget that an Iraqi, when something goes wrong, calls it God's will. When something goes right, it was because he was smart. When an Iraqi fails a class, it's because the teacher was not from his tribe: That's what he will say. When they see that the new government has people they don't like, they will go crazy."

A big part of the problem, he says, is widespread corruption. "To prevent this, the new government has to stop the corruption -- without it we cannot have even security. I am working to build barracks and bases for the new Iraqi army. I have to pay all of the officers and even then, someone steals half my concrete. This is stolen by the soldiers whose base I am building. To protect them from the [insurgents]."

There is no doubt that, successful as the voting was, Iraq faces massive problems. Baghdad was comparatively quiet for a few days after the polling, but the insurgency is still going strong. Even in my Baghdad neighborhood, which is far and away the safest in the city for Westerners, I can set my watch by the firefight that has broken out every midnight for the last four nights. It's down the road at a roundabout that connects a dangerous neighborhood in southern Baghdad to the rest of the city by a bridge span. Each morning I check the news wires to see if there's been even a mention of casualties from the sustained shooting, which sometimes lasts for 15 minutes and involves hundreds of rounds of small-arms and heavy machine-gun fire.

There's never a mention of it. So although major car bombings are down, in an upper-class neighborhood of Baghdad, full of people that support the elections and don't hate America, there is a brief but intense firefight every night that no one talks about and no one reports because it's not news. That's where Iraq stands right now, successful election or not.