Crazed right-wing moralists, take note: Before SpongeBob, there was Snagglepuss ... and Huckleberry Hound ... and even Popeye. 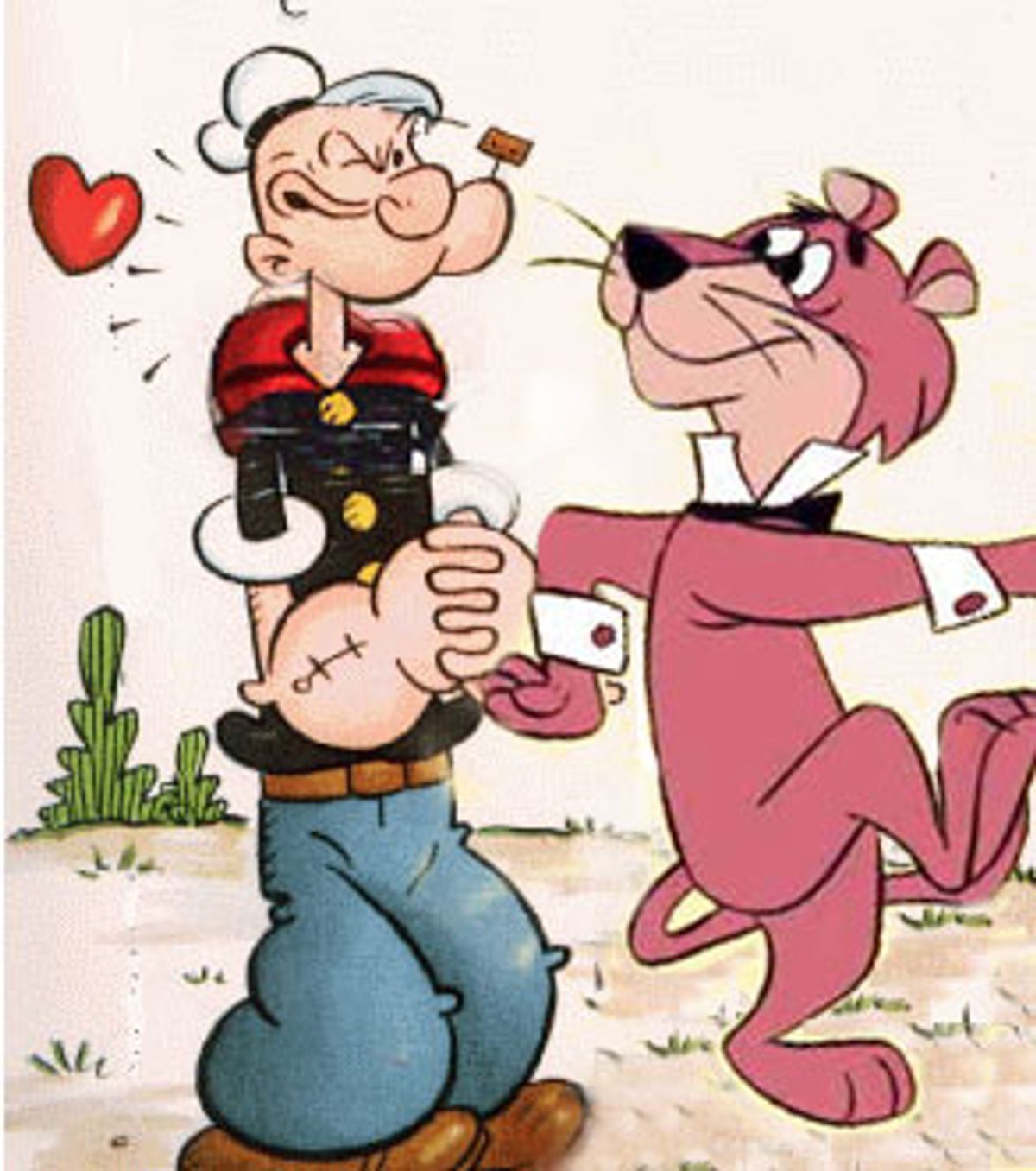 Recent events in the world of animated children's shows have caused people to question whether the cartoon industry is promoting a homosexual agenda. Allegations have been directed at SpongeBob SquarePants for participating in a pro-gay video, and at Buster the Bunny for his fraternization with a lesbian couple and their children. While some have dismissed these allegations as the rantings of ultraconservative Christians, gay cartoon characters do in fact exist, and some of them are even politically active. I recently asked some of them to share their stories.

Sitting in the living room of his well-appointed Cape Cod-style home, a cultural icon recalls his heyday with sadness and regret. "I was in constant fear of being found out," says Popeye, sipping herbal tea. "I thought once I cast Olive Oyl, everyone would know. She was so tall and lanky, with that boyish figure ..."

He trails off, shaking his head. "If you want to know the truth, I picked her because she reminded me of someone." He smiles and looks wistful. "Ensign Robert Flynn. Some of my fondest memories of the Navy revolve around him."

Popeye the Sailor Man, the animated embodiment of testosterone, lived in terror of being outed, as it would have ended his lucrative career. "Bluto threatened me with that a couple of times," he confesses. "I always wondered about him, though. He was so hypermasculine, always swaggering around like he had something to prove." He sighs and leans back against the antique sofa. "Maybe I'm just projecting, though. I did a fair amount of macho posturing myself."

First making the scene in 1929 as a bit player in a comic strip, Popeye became an immediate success. The series was finally renamed for him, and movies followed. In the '30s, Popeye's films were even more popular than Mickey Mouse's.

"Even though we were rivals, Mickey was one of the few people who were nice to me after learning I was gay," Popeye says.

"You know, people don't realize how different it was back then," he continues. "It wasn't like today, where only a few religious nuts get upset and boycott your work. My whole life would've been ruined if I'd come out. I had no choice."

Popeye stops and stares at the floor for a moment. "But still," he almost whispers, "every time I said 'I yam what I yam,' I felt like a fraud."

Reluctant to say more, Popeye tells me to check out the Lesbian, Gay, Bisexual, and Transgender Cartoon Alliance. He says the group helped him immensely when he finally decided to come out as gay after being brutally caricatured on-screen by Robin Williams.

Three days later, I'm in the parlor of a lovely San Francisco townhouse, being entertained by a self-described "proud queer, an old queen, ev-en!"

"I think it's terrific what SpongeBob is doing," he declares as he accepts a white wine spritzer from longtime companion Huckleberry Hound. "I've heard rumors about Squidward, too." Snagglepuss looks at his partner. "Two out and proud gays on one show, wouldn't that be fabulous?!"

The more reserved Huckleberry shakes his head. "I just wish it wasn't such a big deal. It would be nice if they'd leave his private life out of it and just allow him to be the amorphous asexual blob that he was drawn to be."

"I had a much different Hollywood experience than Puss," he continues. "The producers were looking for someone to host a show, to be a major player. They didn't care that I was gay, but this was 1959, and they didn't want any speculation about me." He sits down on the end of the chaise longue and puts his hand on Snagglepuss' leg. "They liked my look, but I sounded very effeminate."

"Luckily, he could do wonderful impressions," Snagglepuss chimes in. "They just fell in love with his Andy Griffith!" Snagglepuss grins. "Guess how we met. I was a guest on his show and then got my own segment. It was love at first sight."

"We were well known among industry players after that," Huckleberry says, looking sheepish. "I'm a homebody, but Puss always wanted to be out at all the parties."

His sociability proved fortuitous. Snagglepuss and Huckleberry soon became confidants of other prominent cartoon characters struggling with their homosexuality. And what started as an informal support group slowly morphed into a political action network.

"During the mid-'70s, the public became more aware of just how many celebrities were gay," explains Snagglepuss, turning serious. "Well, that included us, and people began speculating about cartoons the same way they did about human actors."

"The ironic thing is, they were wrong about one of the first gay icons," he adds. "There was always a lot of talk about Velma, but she's strictly hetero."

"That's true," agrees Huckleberry. "And a militant feminist. She carried around a dog-eared copy of 'The Second Sex' and refused to dumb herself down for the cameras. That's how the rumor got started."

"Even we believed it," Snagglepuss admits. "But then Daphne, who's actually bi, told me that she'd tried to get Velma to 'experiment' a couple times, but she wasn't interested. Velma's always been supportive of our cause."

"Everyone including Scooby-Doo has been supportive," he continues. "I guess once ... apparently, Fred and Shaggy both had a lot of Scooby snacks, and, well, one thing led to another ..."

"Let's just say it changed their perspectives," concludes Huckleberry. He looks at Snagglepuss. "We can leave it at that."

Asked which characters are members of the LGBT Cartoon Alliance, Snagglepuss runs off some names: Jabberjaw, Auggie Doggie, Mr. Slate of "The Flintstones," Elmer Fudd, Pepé Le Pew ("He's what's now called pan-sexual," says Snagglepuss), everyone in "Josie and the Pussycats," all three members of "The Hair Bear Bunch," several Smurfs, and Gargamel, and Foghorn Leghorn.

"That last one surprised even us," Huckleberry says. "And Bugs Bunny hasn't officially joined, but he has been to a few meetings." He divulges, "He had to dress up as a woman a lot on the show, and then found himself doing it off-screen."

Snagglepuss adds, "Of course, he could just be a straight cross-dresser, but he enjoys flirting with men. You may have noticed that he kissed a lot of male co-stars on his show, too." Huckleberry nods. "He's still trying to figure himself out."

Though both admit to some progress for gay cartoon characters, they're worried about the future. The increasing influence of the religious right and the passage of state laws banning gay marriage have Snagglepuss rallying the troops for the battles they may face in the next four years.

"I guess the most significant thing is that we've reached out to the puppet community," says Snagglepuss. "It's an important alliance. Tinky Winky weathered the storm, Bert and Ernie are still going strong after all these years, and Big Bird and Snuffleupagus just announced their engagement. Except for the hullabaloo about Buster the Bunny's human friends, PBS has been very supportive."

Huckleberry is less optimistic. "I just don't know what these next few years are going to bring. I'm concerned, very concerned." He shakes his head. "If these people knew what it used to be like for us they wouldn't force us to deny who we are. They'd have some compassion."

Snagglepuss puts his arm around the man he calls his husband. "They're only human beings," he says gently. "They just don't have the kind of depth that we do."