Why does the Web's biggest retailer want you to confide your hopes, dreams and aspirations to a Web site called 43 Things? It's not telling. 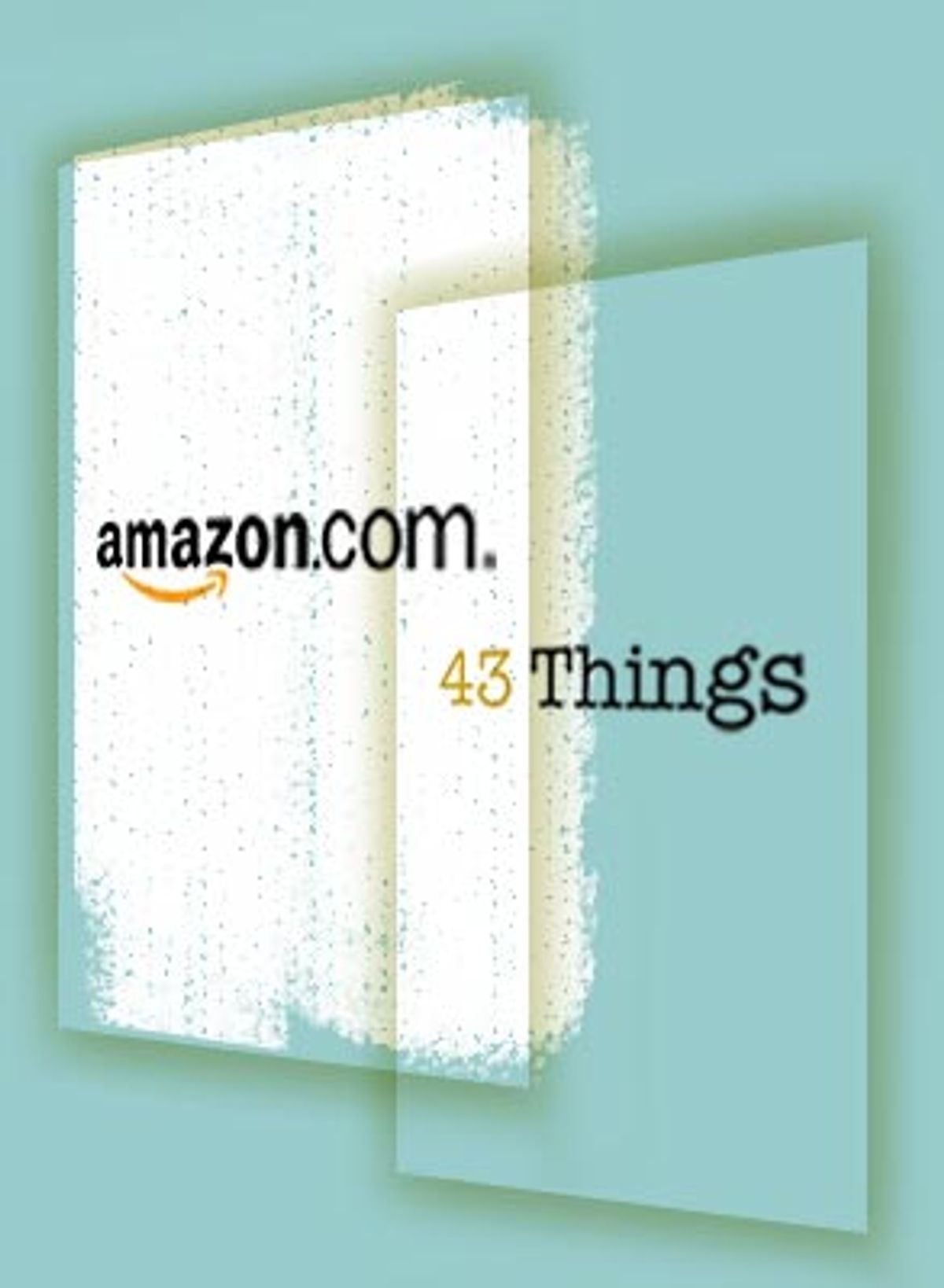 Remember that famous New Yorker cartoon "On the Internet, nobody knows you're a dog"?

On the Internet, nobody knows you're Amazon.com, if you hide behind the friendly face of an independent start-up.

Shortly after Salon's cover story on tagging was published on Feb. 7, we received an e-mail from a reader urging us to look into the relationship between a site featured in the story, 43 Things, and Amazon.com.

The Web site, which is produced by a start-up that calls itself the Robot Co-op, is a place where visitors can confide their hopes, dreams and goals and connect to other people with the same aspirations. To all outward appearances it looks as if it is yet another grass-roots Web start-up. But it's actually funded primarily by Amazon, although neither Amazon nor the Robot Co-op wanted users of the site to know that -- at least not yet.

When Salon asked Erik Benson, the "chief janitorial officer" of the Robot Co-op, if his company is a subsidiary of Amazon, he said: "Can I get back to you on that?" When pressed, he said the company is going to announce an investment from Amazon next month. But he wouldn't say if his company would be wholly owned by Amazon, or if the shopping site would just be one of several investors.

"Nobody's supposed to know that," he said.

Several of the founding members of the Robot Co-op, including Benson, used to work at Amazon in the company's personalization group, so it's not all that surprising that the group might get some funding from its former employer.

But in a subsequent e-mail refusing to comment on the "rumors," Benson defended his Seattle company's indie cred: "We're working in a small office in Capitol Hill above a yoga studio, use our own Powerbooks at work, have our own hosting and dreamed up this project and company 100%."

An Amazon spokesperson put the relationship differently: "Amazon.com is the only investor in Robot Co-op, and we're not discussing details beyond that," said Drew Herdener, senior public relations manager for Amazon Platform/Technology.

Robot Co-op CEO Josh Petersen, who lists his job title as "typist" on the company's Web site and who also used to work at Amazon, responded to Herdener's comments in an e-mail: "The Robot Co-op is a small start up fueled by some exciting ideas about our shared goals and desires. We are pleased Amazon.com has invested in The Robot Co-op and excited to be working on ways people can connect and share experiences online."

One thing is clear: The people posting their hopes, dreams and aspirations to 43 Things probably don't realize that they're effectively whispering them in the ear of the Web's biggest retailer, a multibillion-dollar, publicly traded company.

Whatever plans Amazon has for the little company it is funding, it's not telling. But you can add Amazon to the list of big companies, along with Google and Microsoft, that are taking tagging seriously.

And it's not hard to envision how Amazon might find a way to capitalize on all our hopes and dreams through 43 Things. After all, if your goal is to lose 30 pounds or write a book and have it published, surely you might be interested in buying a book or two to help you on your way?