Newly empowered Shiites are wrangling over religion and politics as ayatollahs, and the U.S., seek to shape Iraq's new government. 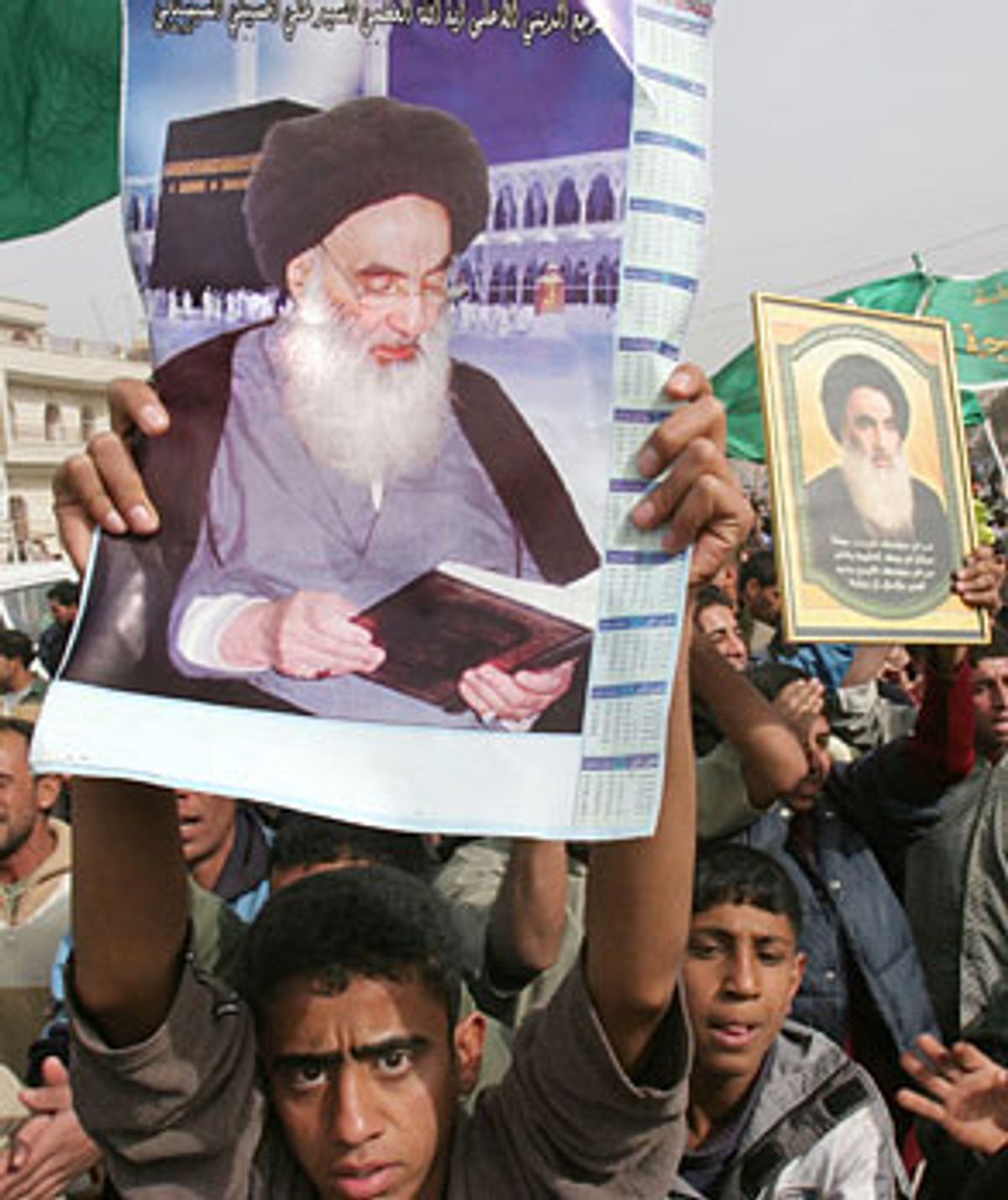 Sitting in a white room paved with spotless rugs, Sheik Mohammed al-Khazai serenely welcomed visitors into his home and spread the word from Grand Ayatollah Ali al-Sistani. Iraq's new government and constitution must respect Shiite Islam's sharia law, Khazai said. That's hardly what U.S. policymakers had in mind when envisioning a democratic Iraq, but it's not an uncommon desire of religious leaders in the country. And Khazai is not an average cleric issuing demands from the pulpit at a Friday sermon.

Khazai was recently named a wakeel, or representative, for Sistani and another of the four grand ayatollahs who make up the top Shiite religious authority in Iraq, the marjiya. After the votes from last week's election are tallied -- a process expected to be completed Thursday -- Sistani and the other ayatollahs of the marjiya will officially become the most potent political force in the country. The United Iraqi Alliance, a slate of candidates loyal to the marjiya, is surging ahead in the vote count, undoubtedly because of a widely held belief that the candidates had Sistani's endorsement. "When [the marjiya] said that the election is a must for people, it was not for the purpose of establishing a National Assembly," said Khazai in a recent interview. Sistani told people it was their religious duty to vote to make "sure the coming constitution will not have [provisions that violate] Islam and that [the one] who rules Iraq is not a man but a constitution," Khazai said.

Many United Iraqi Alliance candidates share strong loyalties to the marjiya, and they are expected to try to see that their priorities are carried out -- meaning a heavy dose of religious law mixed into the constitution, something U.S. officials, Sunnis, Kurds and even some Shiites are loath to see happen. A showdown when it comes time to write the constitution, Shiites fear, could lead to civil dissent that would weaken their long-sought rise to power. With the unquestioned loyalty of millions of Shiites, and the backing of an electoral mandate, Shiite leaders already have a good deal of leverage to shape Iraq in their own vision. So the big question is the degree to which the marjiya will seek to influence the politicians.

On the one hand, Khazai says, the clerics don't want to interfere in the new government. But sensing the unprecedented opportunity Shiites finally have to rule in the manner they see fit, after decades of rule by the Sunni minority, the marjiya seem determined to ensure that the new government, and the constitution in particular, agree with their sensibilities. "The marjiya will not interfere unless people need it," Khazai said. But "if the marjiya find that the coming policies oppose the sharia, they [will feel] it is their duty to stop that policy." The Supreme Council for the Islamic Revolution in Iraq, a conservative religious group whose candidates dominate the United Iraqi Alliance slate, is echoing the calls of the marjiya in insisting that a new constitution not violate sharia law. "We [want] this constitution to respect Islam as the religion for most of the people in Iraq," said Reda Taki, head of political relations for the Supreme Council. "The constitution won't respect any law against Islam."

Sharia consists of rules and regulations derived from the Koran and the Hadith, a record of what are believed to be practices of the prophet Mohammed. Sunni sharia law and Shiite sharia law are similar, but they do have a few differences. For example, Shiites place more emphasis on pilgrimages to holy cities like Najaf and Karbala, which has fueled the massive religious tourism industry in those two Iraqi towns. In addition, Shiites are permitted to hide their religion if being open about it would endanger them, a nod to their historical role as an oppressed underdog.

While seeking the guidance of religious leaders, United Iraqi Alliance candidates for the moment are trying to strike a diplomatic tone. They recognize that the touchy question of mixing religion and governance could make minorities like the Sunnis feel threatened or excluded, so, to assuage such fears, they are setting up a flurry of meetings with political groups across the spectrum, including Sunni clerics who boycotted the vote. "Because we are in the first steps of building a new country we have to be precise and wise. We don't want to provoke the others. It is the time for cooperating with others, not conflicting with them," said the Supreme Council's Taki, sitting on the edge of a couch, his knees bouncing in a sharp pinstriped suit and his hands fiddling with a string of brown prayer beads.

No matter what degree of involvement the clerics have, Taki insists no one has theocratic designs in mind for Iraq. "We don't believe in an Islamic state because the form of the people in Iraq is different [than in Iran]. Most of Iran is Shiite. And we don't believe at all in a Shiite state even though we will have a massive majority in the [National] Assembly."

The groups of candidates likely to come in second and third when the vote count is complete, one led by interim Prime Minister Ayad Allawi and the other by Kurds, campaigned with a decidedly secular tone -- setting the stage for a divisive debate over the role religion will play in the new government and, more important, the new constitution. "If [the Alliance slate] is the choice of the people, then we will work with them and with the political process," said Muna al-Ainachi, a member of the Al-Wefaq movement allied with Allawi. "But we represent the secular and liberal movement of this country, and [we hope] to get the majority in 2006," when another round of elections will be held.

And on the streets, all the talk of Shiite religious leaders coming to the fore has the large minority of Shiites who voted for secular candidates wondering how their views will be represented. Osama Ahmed, with an abundant frame from years as a prosperous engineer, pressed against the sides of his plastic chair as he leaned down to pull up his pant leg and reveal a brace around his knee. The knee has been sore since he walked over a mile to vote in the Jan. 30 elections, he said, his pride in having made this sacrifice still evident.

"I am very strict, very religious," said the 64-year-old Shiite Muslim, who faithfully prays three times a day, as required. At the ballot box, he passed over the United Iraqi Alliance, dominated by Shiite religious leaders, to check the box for the slate of candidates led by Allawi. "He is Shiite, a Muslim. He believes in God and prayer. But he's also strong. When he decides to do something he does it. He doesn't change his mind," Ahmed said, explaining his choice while sitting in front of his son's toy store on Baghdad's upscale Arasat Street.

It was Sistani's call for all Shiites to vote that motivated Ahmed to go to the polls, he said, "but it doesn't mean I have to choose [the United Iraqi Alliance] ... I don't want to be similar to Iran or Afghanistan." Four of his son's friends sitting nearby, also Shiites who voted for Allawi's slate, nod in agreement. "I think [we] should be religious but not [join] religion and government together. Never make religion and politics at the same time," Ahmed said. "There are a lot of people like that, that think the way I do, especially educated people."

Amma al-Momen stands a few feet away, taking in the discussion. The 31-year-old owner of a nearby telecommunications shop shares the same worries but offers some comforting political analysis to the group seated in a semicircle smoking an argeelah, or water pipe. "They are definitely under control because I think Allawi has got some sort of deal with the Kurds to stop the religious guys" from dominating the assembly, he said. By law a two-thirds majority of the National Assembly is needed to approve a president and two deputies. "That is very important for us. We don't want to see a religious government."

Momen sniffs that poor, uneducated Shiites from southern Iraq, home to some of Islam's holiest sites and a stronghold of support for the United Iraqi Alliance, don't understand the impact their support for that slate will have. "In the south they don't have the same idea of government," he said. "They won't feel any different if there is a religious government. They will have the same life they are living now."

Indeed, even before the election, the Shiite religious leadership emerged as the one authority strong enough to keep order, at least in southern Iraq, in the chaos of the postwar power vacuum. The United States learned that lesson last spring when the signing of the interim constitution was delayed after Sistani raised concerns about some provisions. And Sistani's insistence on holding the Jan. 30 elections even after U.S. authorities said the country wasn't prepared in terms of logistics or security played a major role in ensuring that they took place.

U.S. administration officials from Vice President Cheney on down have recently made it clear that they do not intend to let Iraq become a religious state. And they expect the marjiya to agree. In a sign of its concern over mixing religion with politics, the administration permitted Islam only to be a "source" of law during the writing of the interim constitution last spring, not the basis for it.

For the moment the clerics, and most Shiites, are grateful to the United States for ridding them of decades of punishment meted out by Saddam. But at the same time, they know the United States did not start a war costing thousands of American lives and billions of American dollars just to free them and are suspicious of its long-term intentions here. "We don't care about the military in Iraq. What we care about is the political effect all over Iraq. We don't consider American soldiers our enemies ... But our enemy is the American policy which tries to take control over Iraqi lives," Khazai said.

Speaking in the poetic classic Arabic of a religious leader, Khazai said U.S. policy could become like salt that stunts the growth of fertile land. "The marjiya are like the purest water. When this water covers salty, barren land, it washes away the salt and makes things grow," he said. "Not since after the death of the prophet Mohammed -- peace be upon him -- have we witnessed such a victory. And if the American administration fulfills its promises to the Iraqi people, we will be very grateful and we will not forget this favor from them."

He bows his bespectacled head, crowned in a white turban, and pauses. "We thank," he finally said, raising his eyes. "But we don't bend."

Jill Carroll is a freelance writer working in Baghdad.