Still clueless after all these years

If President Bush wants to lure blacks into the GOP, he'd better show he actually knows something about issues that matter to them. 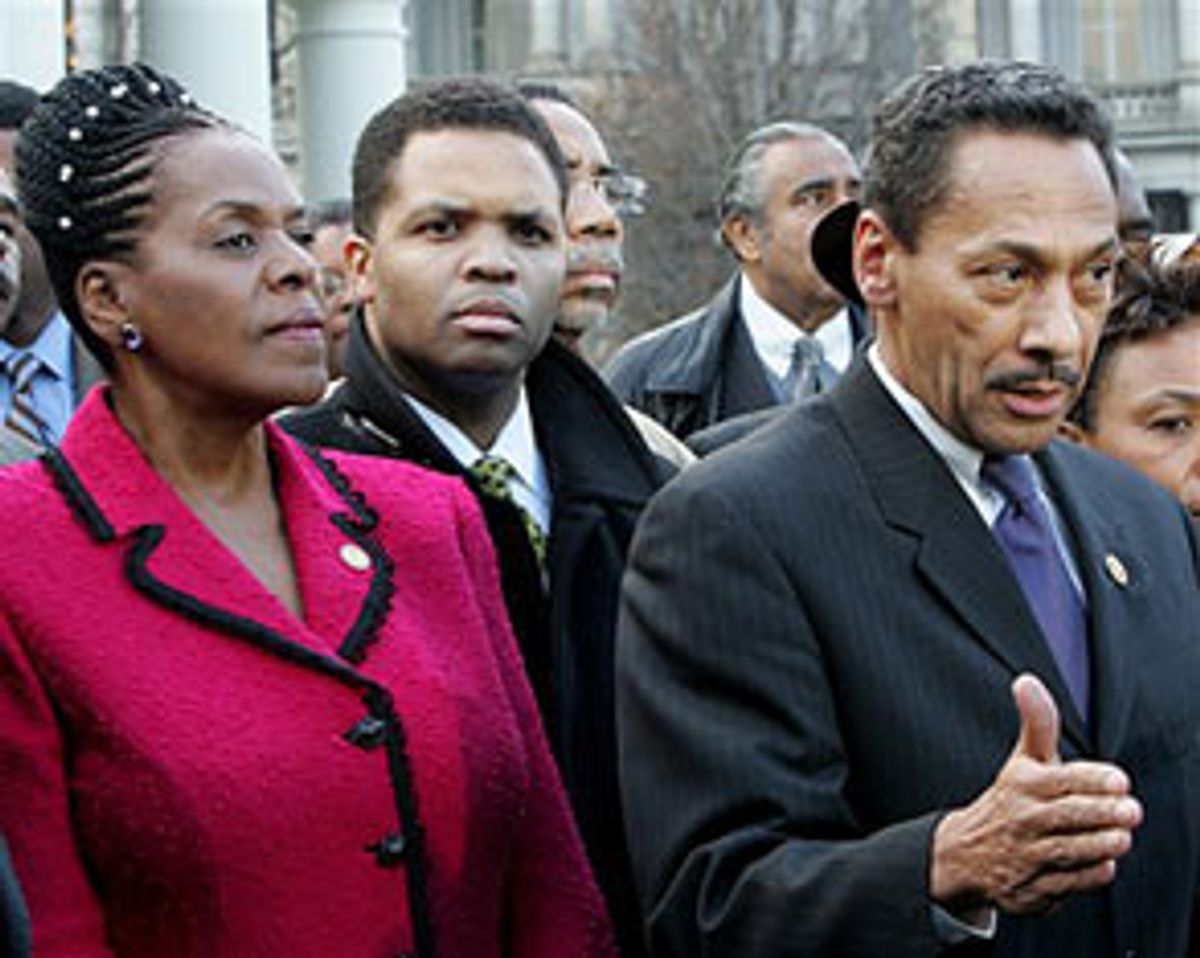 President Bush was roundly criticized during his first term for rarely meeting with African-American leaders and civil rights groups. But as part of an apparent New Year's resolution to reach out to blacks in his second term, Bush met with the 43 members of the Congressional Black Caucus late last month. With this gesture, Bush surely hoped to begin luring more blacks into the Republican Party. Bush got 11 percent of the black vote in 2004, 2 percent more than supported him in 2000, but John Kerry still received 10 million more African-American votes than Bush did.

For caucus members, the Oval Office meeting was an opportunity to present their legislative agenda to the president -- an agenda that centers on eliminating disparities in healthcare, education, economic opportunity and justice. Instead of healing old wounds, however, the meeting went awry when the discussion turned to the topic of voting rights. In an episode that got a lot of play in the black press, if not the mainstream media, Rep. Jesse Jackson Jr., D-Ill., asked the president a question that seemed like a no-brainer: "Do we have your support in extending and strengthening the 1965 Voting Rights Act when it comes up for renewal in 2007?"

According to Jackson, Bush responded that he didn't know enough about the legislation to comment. Rep. Bobby Rush, D-Ill., who also attended the meeting, said he was "surprised and astounded" at Bush's remarks. Bush's effort to woo blacks on issues of concern to them clearly is not off to a good start. In attempting to sell Social Security reform to blacks, for instance, Bush pointed out that half of black men die before age 65 and therefore never receive their benefits. But instead of promising to address the causes of early death, including inadequate healthcare, he proposed to allow them to pass on the benefits to their children if they die prematurely. I doubt that was quite what African-Americans were hoping to hear. Then, in another blow to the priorities of African-Americans, Bush put more than 150 domestic programs on the chopping block in his new budget, including block grants needed to rebuild poor communities.

Claude Allen, assistant to the president for domestic policy, argues that Jackson and other caucus members mischaracterized the president's response to the voting rights question. In a letter to the editor of the Chicago Defender, a black newspaper that criticized Bush's reaction, Allen wrote last week: "The president answered that he would want to see the specific legislation, a reasonable response in light of the fact that the legislation has not been considered by Congress and is not needed until the current Act expires in 2007. I can assure you that the President is well aware of the importance of the Voting Rights Act."

Either way, Bush's awkward response was a signal to many African-Americans that although the president may want more blacks to support the GOP, he is rather disengaged from issues of importance to them. African-American reaction to the Oval Office incident in particular has been indignation -- addressed on television programs such as "Tavis Smiley" on PBS and "America's Black Forum," in Clarence Page's Chicago Tribune column and on various Web sites. African-American commentators are openly wondering: How could the president, who trumpeted the arrival of voting rights in Iraq, be so unaware of the history of voting rights in his own country?

For millions of African-Americans, the Voting Rights Act is a symbol of the century-long struggle for true democracy after the end of slavery. The act was passed only 40 years ago, and Bush is certainly old enough to remember how blacks were relentlessly terrorized for attempting to vote. More recently, the disenfranchisement of Florida voters in 2000 and the voting irregularities in Ohio during the last election have prompted legitimate concern in the black community about the fairness of U.S. elections. Making matters worse, Bush's vagueness on voting rights could unintentionally feed an urban legend that has circulated among African-Americans by e-mail for years, claiming (inaccurately) that the entire Voting Rights Act will expire in 2007, taking away blacks' right to vote.

Of course, the right to vote is protected by the 15th Amendment. And while the Voting Rights Act itself won't expire in 2007, there are certain provisions in it that are crucial for Congress to renew -- namely, Section 5, which requires federal preclearance of any voting changes to ensure that they are not discriminatory, and Sections 6-9, which set forth criteria for election monitoring by the Department of Justice. Other provisions up for debate are related to language assistance for minorities.

When one considers Bush's poor record on voting rights, his comments to the Congressional Black Caucus seem less like an aberration than part of a pattern. Bush won office with the help of the disenfranchisement of thousands of blacks in Florida. But then he let two years pass before signing the Help America Vote Act, which is designed to improve the administration of elections. And because of the federal government's delay in providing technical guidelines to states for new machines and other foot-dragging (such as waiting two years to appropriate funding for the act's provisions), most states have been unable to improve their election equipment and fulfill other requirements of the act.

If the president were concerned about voting rights in America, he might have recognized his State of the Union address as a perfect opportunity to address the topic, just as he used the address to herald the historic voting in Iraq. But he didn't say a word. If he had, Bush might have convinced African-Americans that he really is trying to mend the administration's rift with the black community.

If President Bush and his Republican colleagues are serious about their courtship of African-American voters, they should bolster their knowledge of issues that are important to that community -- and follow up with legislation and funding. Before Bush meets with black leaders again, his staff would do well to get him a copy of the Voting Rights Act of 1965 and the provisions up for renewal in 2007. He might learn something.

Karin L. Stanford is a writer and professor of Pan African Studies and African American Politics at California State UniversityNorthridge. She lives in Los Angeles.