The Duke of Hazard

Hunter S. Thompson blasted through the world like a big-finned rocket of defiance and revulsion. He leaves a big burned hole and a safer, duller world. 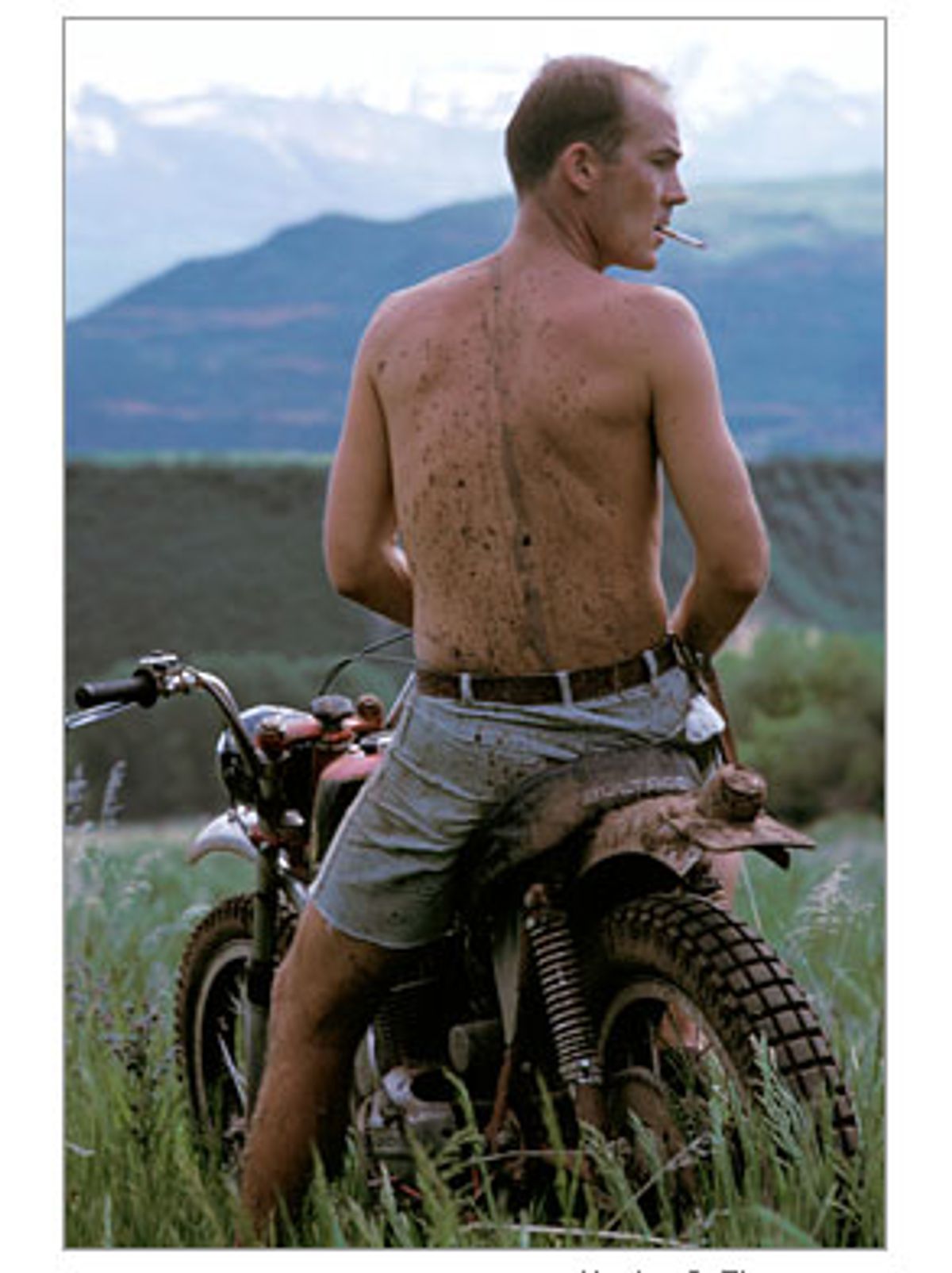 "When the going gets weird, the weird turn pro."

Last night, the night that Hunter S. Thompson was apparently shooting himself (an exit somehow befitting the self-styled anarchy and insouciantly godless iconoclasm of the man) my friend "Dirty Bobby," a magazine photographer, and I were in the kitchen of my house discussing a road trip he'd taken on a journalism assignment in Nevada. Suffice to say there was a lot of crystal meth involved, a rental car with a V-8 engine, a half-naked, semi-conscious female basketball player from UNLV, and a remake of an automatic Nazi "grease-gun," which was fired repeatedly out the window at 80 mph.

It was the first time in my life I have ever considered the possibility that Dr. Thompson's work might have had a questionable impact on the youth of today. This was certainly not the first of such stories I'd heard.

While there is a lot to be said for this kind of self-consuming, skid-marks-on-the-lawn-of-the-establishment behavior, most of the kids who imitated Thompson didn't really get that he wasn't simply depraved for the sake of depravity. Thompson may have seemed to be merely flailing violently among the vultures and wolverines wafting up from the spilled ether in his Buick floor mat, but he actually had a point: He was searching for the American dream. The twisted style in which he conducted this crusade was a reflection of how twisted he felt that dream had become.

If artists are the uninsulated emotional conductors for the rest of society, Thompson was a one-man power grid of paranoia, revulsion and defiance. He was a canary in our collective coal mine, an ulcer on our societal tongue, a warning. He was physically a big and strong enough man to recklessly embody the idea that we should all Beware of Where We Are Headed. A shuddering red flag.

Alienation was a big part of Thompson's voice, but not (I believe) because he wanted to be alienated. HST wrote very movingly about participating in the thrillingly inclusive group energies of the 1960s. He just didn't really fit in very well to anyone else's scene. He was a bit too charismatic, clean-cut and bizarre on his BSA, with his cigarette holder, to blend in with the Hell's Angels. He needed to be the center of attention too much to comfortably share the spotlight in rooms where other luminati of the day were having their moments -- rock stars, politicians, the various and infamous. Thompson was trapped, somewhat, in the limbo between Journalist and Personality: the neither-nor underworld of the rock-star scribe, who wields a little too much personal gravity to yield the focus to a subject other than himself.

But nobody wanted Thompson to stop talking about himself -- we loved living vicariously and seeing the world through his yellow target-range aviator lenses. He was our reluctant superhero of ultra-decadence. The contexts in which Thompson was placed (in a younger, finer world, when Rolling Stone had the balls and decency to trust the untrustworthy for the sake of Thor's whipsong, faxed to the editor on paper napkins in scrawls illegible) were really just an excuse to hear more of him, commenting on anything. It wasn't that his subjects were so terribly important, or even timely -- his deadlines came and went -- it was the verbal synapse-connections -- poison flowers that could only blossom from an overheating brain: Teeth like baseballs, eyes like jellied fire ... shoot the pasties off an 8-foot bull dyke and win a cotton-candy goat ...

Sure, the man had been dehydrated since 1971; he needed electrolytes and proteins and Thorazine and antidepressants and probably something for his ailing joints because he probably had no cartilage in his knees or hips at all, and a whole host of other difficulties that comes of applying a lifelong scorched-earth policy to your mind and body. Thompson was old, and life had finally become sufficiently uncomfortable for him to check out.

I think it is improper and disrespectful to whine about this suicide. Thompson was in the game for a very, very long time, and I think it is a safe bet that he was never comfortable. This was a profoundly tortured guy, the smoke from whose ears always made a whole lot of exciting colors that we all enjoyed. It was a great brain to watch but you wouldn't want to live in it, I'd aver. He was a butch motherfucker and I'd bet cash he stuck it out significantly longer than he really wanted to. Let's face it, HST was not one for the nursing home -- he'd have just stolen everyone else's barbiturates and hurt people trying to arm-wrestle.

May the kindly trickster gods collect you, Hunter Thompson, and drive you to where the buffalo roam, where your mind can unspool itself forever and your spirit can go on groping unsuspecting tits and trashing hotel rooms. You have earned it, Golden and Immortal Son of Classic Letters. Rest in Whatever You Would Prefer to Peace. We, the filthy and leaderless children who cherish your legacy, salute you, and will honor you with every bullet fired out of our car windows toward the unmarked desert sky.