Gannongate: It's worse than you think

Bush's press office gave Jim Guckert access, even knowing his only credentials were from the blatantly partisan group GOPUSA. 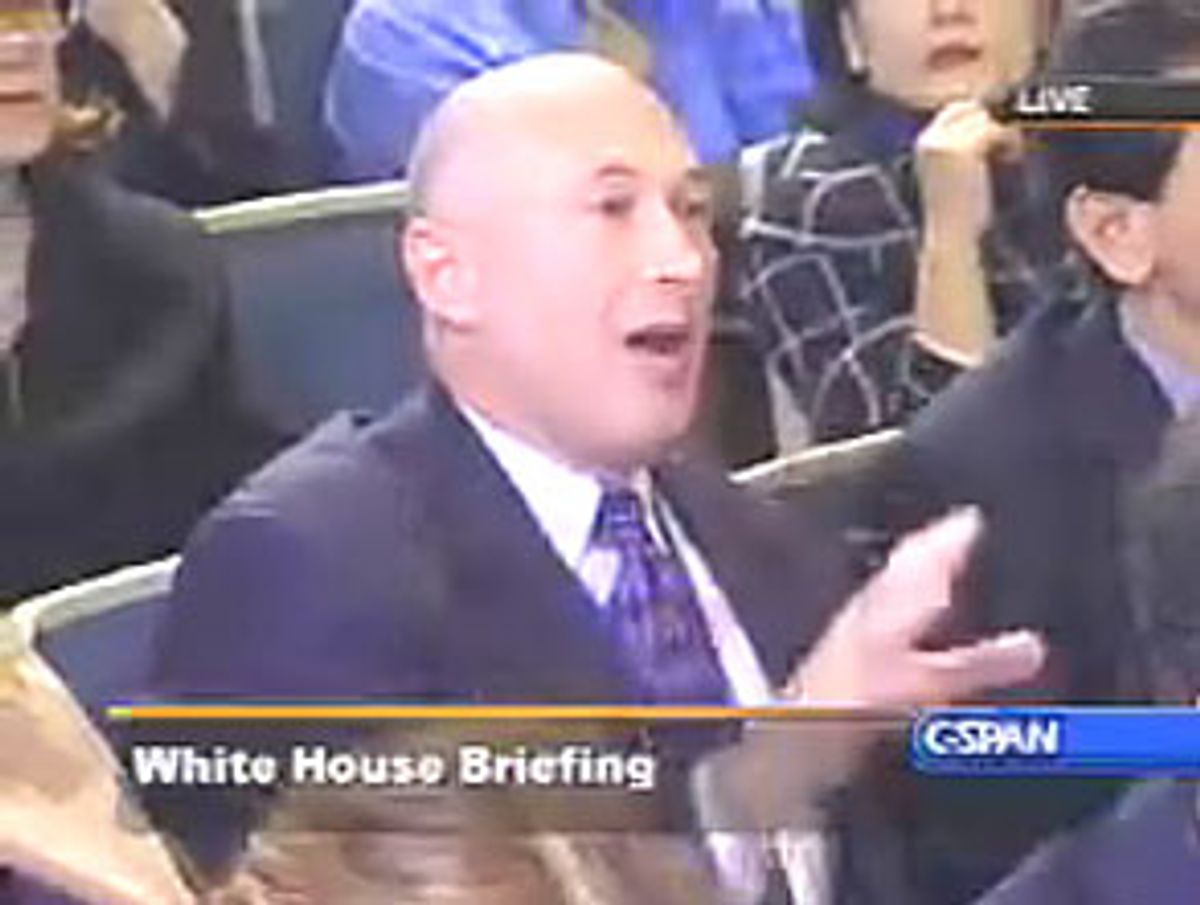 When the press first raised questions about why Jim Guckert had been awarded access to the White House press room for two years running while he worked for Talon News, critics charged that Talon, with its amateurish standards and close working ties to Republican activists, did not qualify as a legitimate news organization. It turns out the truth is even stranger: Guckert was waved into the White House while working for an even more blatantly partisan organization, GOPUSA.

White House press secretary Scott McClellan originally told reporters that Guckert was properly allowed into press briefings because he worked for an outlet that "published regularly." But that's when the questions were about Talon. More recently McClellan offered up a new rationale. Asked by Editor and Publisher magazine how the decision was made to allow a GOPUSA correspondent in, McClellan said, "The staff assistant went to verify that the news organization existed." (Emphasis added.)

That, apparently, was the lone criterion the press office used when Guckert (aka Jeff Gannon) approached it in February 2003 seeking a pass for White House briefings. Not yet working for Republican-friendly Talon News, which came into existence in April 2003, Guckert, using an alias and with no journalism experience whatsoever, was writing on a voluntary basis for a Web site dedicated to promoting Republican issues. To determine whether Guckert would gain entrance to the press room, normally reserved for professional journalists working for legitimate, recognized and independent news organizations, the press office simply logged on to the Internet and confirmed that GOPUSA "existed," and then quickly approved Guckert's access. In a White House obsessed, at least publicly, with security and where journalists cannot even move between the White House and the nearby Old Executive Building without a personal escort, Guckert's lenient treatment was likely unprecedented.

Yet, if there's one other person who did manage to receive the same type of kid-glove treatment from the White House press office, it was Guckert's boss at GOPUSA and later at Talon News, Bobby Eberle. A Texas-based Republican activist and a delegate to the Republican National Convention in 2000, Eberle founded Talon News after he became concerned that the name GOPUSA might appear to have a "built-in bias." With no journalism background, he too was able to secure a White House press pass, in early 2003, on the strength of representing GOPUSA, dedicated to "spreading the conservative message throughout America."

This is not how the White House press office has traditionally worked. "When I was there we didn't let political operatives in. It was completely contrary to what the press room should be used for," says Joe Lockhart, who served as White House press secretary to President Clinton during his second term. Asked what would have happened if a reporter from a clearly partisan operation, say "Democrats Today," had requested a White House press pass, Lockhart said that if the chief of the Democratic National Committee were attending an event at the White House, then perhaps the Democrats Today reporter might be allowed in for that one day. "But to be admitted as a reporter and sit in a chair and act like a reporter" for months on end the way Guckert did? "No," said Lockhart, "that's not within the realm of what [is] proper."

Guckert and Eberle remain at the center of the scandal. When liberal bloggers revealed that Guckert, who posed reliably friendly questions to administration officials, had recently offered his services online as a gay male escort, the questions for the White House only became more uncomfortable.

Guckert first came to national attention when he asked President Bush a question at his Jan. 26 press conference. Guckert's query, in which he ridiculed Democratic leaders for having "divorced themselves from reality," was what initially raised the ire of liberals. It was not how an openly Republican partisan got inside the White House press room, because partisans have been there for years. Lockhart recalls having been confronted with a similar question of White House access regarding veteran Baltimore, Md., radio host Lester Kinsolving, who for decades has pitched eccentric, long-winded and usually conservative-leaning questions inside the briefing room. (Kinsolving is currently recuperating from triple-bypass surgery.) Lockhart thought it was inequitable that Kinsolving was virtually the only local radio show host with daily access. "The issue got kicked up to my level. I thought it was fundamentally unfair, and it was clear that he was an annoyance to everyone in the room. And frankly we should have shut him down. But I knew if we kicked him out it would be a big story with the right-wing press, and I didn't need that."

Unlike Guckert, though, Kinsolving has an authentic background in journalism, having worked for the San Francisco Chronicle and the Indianapolis Star. Talon's defenders suggest that it too is a legitimate news outlet. But providing some insight into how it operates, Eberle told the New York Times last week that he rarely monitored Guckert's White House work. "Jeff did his thing. I did my thing," Eberle said. In other words, it appears that Guckert, who often cut and pasted White House press releases and posted them on Talon as "news," did not even have an editor. As Media Matters for America noted, Talon "apparently consists of little more than Eberle, Gannon, and a few volunteers."

Just how blatantly the White House press office looked the other way in regard to Guckert and his dubious status as a legitimate reporter comes into stark relief when examining his attempt to secure a similar press pass to cover Capitol Hill. Guckert submitted his application in December 2003 to the Standing Committee of Correspondents, a press group in charge of handing out credentials. In April 2004, the committee denied Guckert's request. Writing to Guckert, committee chairman Jim Drinkard outlined three clear deficiencies in Guckert's application:

1) "Committee guidelines require that on-line publications 'must charge a market rate fee for subscription or access, or carry paid advertising at current market rates.' You have not demonstrated to the committee's satisfaction that Talon News has any paid subscribers, that paid client newspapers publish Talon News stories, or that it is supported by advertising."

2) "The application for accreditation to the press galleries states that 'members of the press shall not engage in lobbying or paid advertising, publicity, promotion, work for any individual, political party, corporation, organization, or agency of the Federal Government.' Talon News has not demonstrated to the satisfaction of the committee that there is a separation from GOPUSA."

3) "Gallery rules and the application state that the principal income of correspondents must be obtained from news correspondence intended for publication in newspapers or news services. The committee feels that paying a single reporter a 'stipend' does not meet the intent of the rule."

To obtain a day pass during the Clinton administration, a reporter "had to make the case as to why that day was unique and why [he] had to cover the White House from inside the gates instead of outside," Lockhart says.

So the mystery remains: How did Guckert, with absolutely no journalism background and working for a phony news organization, manage to adopt the day-pass system as his own while sidestepping a thorough background check that might have detected his sordid past? That's the central question the White House refuses to address. And like its initial explanation that Guckert received his press pass the same way other journalists do, the notion first put out by White House officials that they knew little or nothing about GOPUSA/Talon News, its correspondent Guckert or its founder Eberle has also melted away. Instead, we now know, former White House press secretary Ari Fleischer personally spoke with Eberle about GOPUSA, so concerned was Fleischer that it was not an independent organization. (Eberle convinced Fleischer that it was.) Additionally, Guckert attended the invitation-only White House press Christmas parties in 2003 and 2004, and last holiday season, in a personal posting on GOPUSA, Eberle thanked Karl Rove for his "assistance, guidance, and friendship."