Last year the Senate rejected former mining and cattle lobbyist William Myers for the Court of Appeals. Now Bush is trying again -- and this time Myers' business pals are waging a multimillion-dollar campaign for him. 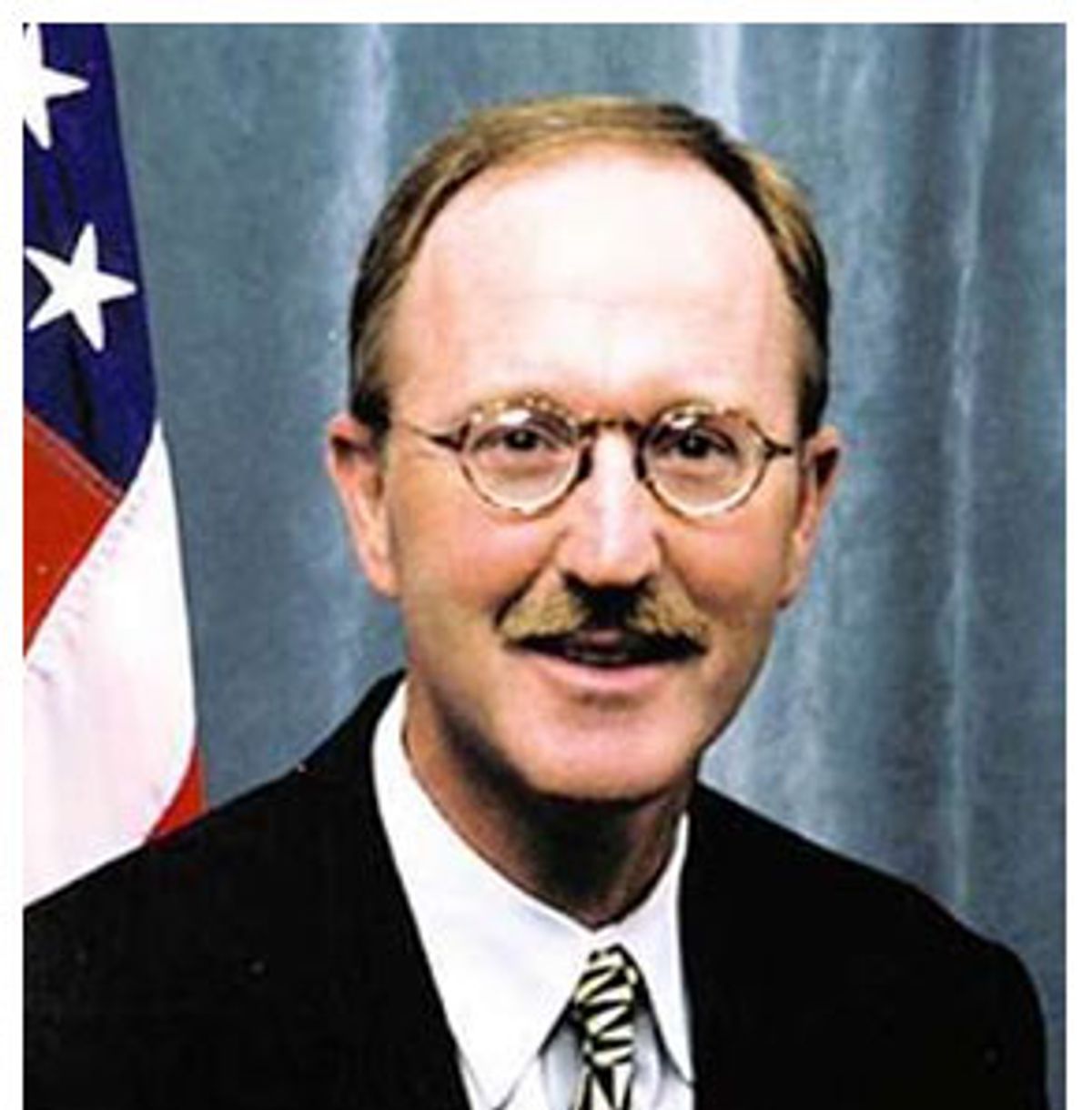 Last year, when the Senate considered William G. Myers III for the U.S. Court of Appeals for the 9th Circuit, Democrats blocked his nomination with a filibuster after questions arose about his work as a lobbyist for mining and cattle interests. Sen. Charles Schumer, D-N.Y., described Myers' environmental record as being "off the deep end," and environmental and Native American groups opposed Myers for his criticism of laws such as the Endangered Species Act and his alleged disrespect for Indian lands and rights. On Tuesday, Myers' nomination goes back before the Senate Judiciary Committee, the opening battle in Washington's on-again partisan wars over President Bush's judicial nominees. This time around, Myers has the full support of his friends in industry.

On Feb. 14 Bush renominated Myers and 19 other unsuccessful judicial candidates, seven of whom were blocked by Democrats in the last Congress, hoping that the four-seat Republican gain in the 2004 election would help push the nominees through. Myers is the test case. If Myers' nomination is blocked again, the GOP leadership might resort to what is known as the "nuclear option," whereby it would try to change the Senate's procedural rules and ban filibusters. Senate Judiciary Committee chairman Arlen Specter, R-Pa., apparently believes that Myers has a good chance of reaching the 60 votes that would ensure a filibuster-proof Senate. Two Democrats voted with Republicans to try to end the first filibuster of Myers, and Colorado's new Democratic senator, Ken Salazar, whose state went for Bush in 2004 and has big mining and cattle interests, has indicated he might vote for Myers.

To help Myers and the rest of Bush's nominees get those votes in the Senate, Myers' former clients in the National Association of Manufacturers plan to wage a multimillion-dollar campaign. The manufacturers hope to provide the critical boost the Republicans need by employing television advertising and grass-roots lobbying to pressure moderate or red-state Democratic senators to help prevent any filibusters. A spokesperson for the business group says that securing approval of Bush's appellate court nominees is now its top priority. This unparalleled effort by big business to influence the judiciary by promoting nominees such as Myers who owe a great deal to the industry lobby raises potential conflict-of-interest questions and poses a new threat to the traditional independence of the judicial branch. And if the Democrats manage to filibuster Myers' nomination again, the pressure on them by outside groups like NAM is only likely to increase.

NAM, the principal lobbying group representing U.S. companies, from multinationals to small manufacturers, is campaigning for Bush's nominees because it believes that the biggest problem facing manufacturing in its race to compete in the global marketplace is non-production costs like tort litigation and regulatory compliance. It presumes that most of Bush's nominees, if approved, would be inclined to stop what it considers frivolous lawsuits, whose costly litigation and awards, it says, are a drag on economic development and discourage job growth and risk taking. NAM president and CEO John Engler, a Republican and a longtime friend of Bush's, says the NAM wants a "fair, impartial and predictable legal system," with fewer delays and appeals.

To accomplish its goals on the national stage, NAM is promoting the package of litigation legislation endorsed by the White House, including the bill to curtail class-action lawsuits signed by the president on Feb. 18 (which will increase federal jurisdiction over such suits), as well as coming bills on asbestos litigation and medical malpractice, which aim to put caps on financial awards to those claiming damages. On the state level, NAM is backing sympathetic political and judicial candidates and trying to sway voters on the issues of frivolous lawsuits and costly verdicts. But NAM also has recognized that much of judges' work concerns commercial and economic matters, and says that the confirmation of federal judges sympathetic to its goals is a "matter of utmost importance." According to Engler, NAM's membership believes that it is vital to confirm judges who "get it right" to replace those who "are negating the work of elected officials in the executive and legislative branches."

NAM's interest in judicial selection parallels the emergence of the courts as a principal battleground on the issue of government regulation. Business is no longer interested simply in educating judges to be more sympathetic to the cost of regulation on commerce but in selecting those already familiar with business through their prior connections. A study conducted by the Center for Investigative Reporting of all of Bush's appellate court nominees in his first term revealed that a significant number had close ties to the energy and mining industries as lobbyists or counsel and that many, like Myers, were nominated for federal judicial districts where battles over natural resources are frequently fought in the courts.

NAM's assessment of the importance of judicial selection was recently validated by an unlikely source. A study released last October by the Environmental Law Institute concluded that a federal judge's political affiliation is a decisive factor in how he or she will rule on key environmental cases. It found that there is a wide gulf in the positions taken by appointees of Democratic and Republican presidents in environmental suits.

NAM's lobbying campaign will focus on politically vulnerable or receptive Democratic senators. Five of the 16 Democrats up for reelection in 2006 come from states that went for Bush in last year's election, and two of those previously voted with Republicans to stop some of the judicial filibusters in Bush's first term. (One, Nebraska's Sen. Ben Nelson, voted to end the filibuster against Myers.) All these senators are undoubtedly aware that fellow Democratic Sen. Tom Daschle's support for the filibusters, particularly that of Myers -- who is seen as a friend to agriculture because of his cattle industry connections -- was an issue in his losing South Dakota campaign last year. His opponent John Thune, who ultimately defeated Daschle, charged that in voting on judicial nominations, Daschle had sided with liberal extremists against the state's farmers and ranchers.

NAM's rallying of corporate muscle around judicial nominations is not unprecedented. In 2002, C. Boyden Gray, counsel to the first President Bush from 1989 to 1993, established the Committee for Justice and a companion foundation and ran a grass-roots and ad campaign similar to that planned by NAM concerning blocked judicial nominees. The committee lists on its Web site the Democrats who have sometimes voted with Republicans to stop a judicial filibuster, along with the Democrats it considers the chief barriers to confirmation. The group credits its television ads with helping to defeat Texas Democratic senatorial candidate Ron Kirk in 2002 over his stand opposing Bush's nominees. Business groups and Republican supporters have donated tens of thousands of tax-exempt dollars to the committee's foundation. And one of the committee's members is Engler, a former Michigan governor and now NAM's chief executive.

Myers has never served on the bench. He was the Department of Interior's top lawyer in 2001-03 and is currently a lawyer in Idaho with the same firm that employed him as a lobbyist for mining interests. He ran into organized opposition to his first nomination from environmental and Native American groups for actions he took at the Interior Department and as a lobbyist in the 1990s for the cattle and mining industries, which are major Republican donors. This time he will benefit from the membership on NAM's executive committee of the president and CEO of Arch Coal. Myers' lobbying of Congress in 2000 helped pave the way for Arch's recent expansion of its federal coal leases despite the opposition of federal regulators and six state attorneys generals who considered the increase potentially anticompetitive and harmful to consumers.

One example of the potential negative impact that judges' rulings favorable to business can have on consumers is a case highlighted last April in Salon. Representing Arch Coal and two other major coal producers, Myers helped push through the Coal Market Competition Act of 2000, which allowed the producers to expand their federal coal lease holdings. The Federal Trade Commission subsequently challenged a consolidation of Wyoming coal producers allowed under the new law, and was soon joined by attorneys general from six states that rely on power from plants fueled by Wyoming coal. They argued that combining the substantial federal coal leases would make anticompetitive coordination among the remaining Wyoming coal producers more likely and thus hurt consumers by increasing their electric utility costs.

"If allowed to go through, this merger would combine two of only four major producers of Powder River Basin coal," Missouri attorney general Jay Nixon warned. But last August a U.S. district court judge nominated by President Bush denied the FTC's request for a preliminary injunction, and the U.S. Court of Appeals for the District of Columbia Circuit then declined to issue a stay pending an appeal.

At the end of January, prior to organizing its initiative on federal judges, NAM launched the American Justice Partnership to push for legal changes in state courts and influence the selection of state judges and politicians. Its success with state judicial campaigns is what helped persuade the NAM's Engler to develop a federal judicial strategy. Engler told a National Press Club audience on Feb. 10 that his interest in influencing the selection of federal judges came from his "assessment back in Michigan of how important the legal climate can be to a state and to a business climate, and therefore extrapolating that to the nation."

Legal experts and the public have sharply criticized the growing involvement of special interests in state judicial elections. A 2003 poll for the New York state court system indicated "an alarming 83 percent of New York voters believe that campaign contributions have some or a great deal of influence on judges' decisions." Survey respondents also believed that political party leaders, campaign contributors and special-interest groups have the most influence over who becomes a judge. And Supreme Court Justices Anthony Kennedy and Stephen Breyer have voiced their concern about the trend that has leading business and Democratic supporters such as trial lawyers and unions pouring millions of dollars into state judicial races.

Underlining the worries about mixing justice with special interests, a committee headed by Breyer is reviewing the status of federal judicial ethics as provided for in a 1980 law that permits anyone to file a complaint alleging a federal judge has engaged in misconduct. But the committee's report is not expected for several years.

Meanwhile, while waiting for his judicial fate to be decided, Myers practices law in Boise for Holland & Hart, which calls itself the largest law firm in the Rocky Mountain West. Its Web site touts its roster of nearly 300 lawyers, 49 of whom were selected for inclusion in the latest edition of "The Best Lawyers in America," the "definitive guide to legal excellence in the United States." Myers' name, however, is not among them.

Dan Noyes is a reporter at the Center for Investigative Reporting. The Open Society Institute supports the Center's reporting on the federal judiciary.