Welcome to wartime Academy Awards: Cheap, tense and cobbled together from graphics rations donated by the E! Channel. Not even Chris Rock or Beyonc 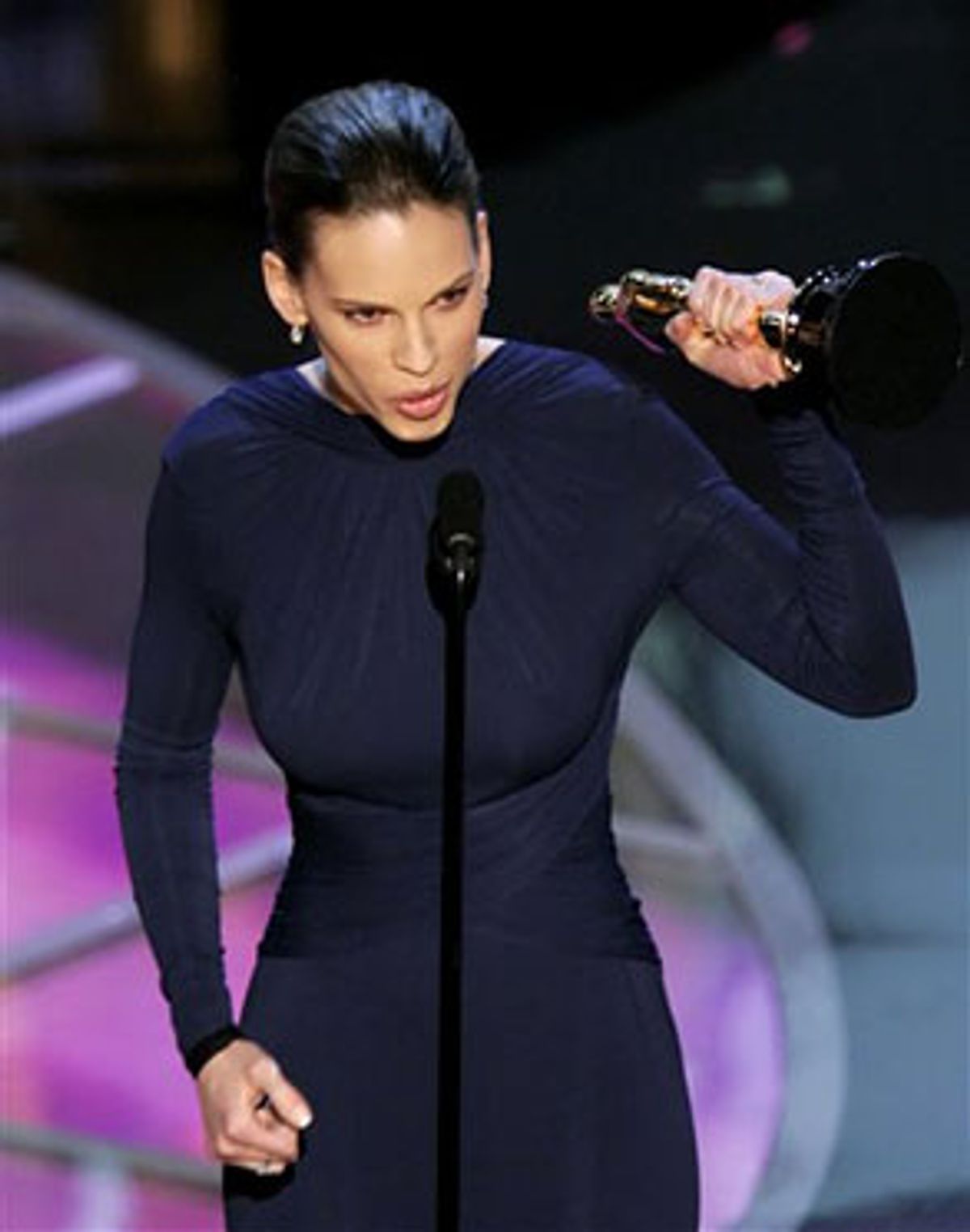 Here in the pit of America's deepest political malaise, We the People increasingly escape into the arts and entertainment to numb the pain of an increasingly nasty-looking future. We're in a war we never wanted, our country is trillions in debt, and the economy is still sketchy, which, I guess, is why Oscar had to whore out his ass to PricewaterhouseCooper and be embuggered by accountants.

This was the Oscars that raised the question: Does Jay-Z own the accounting firm PricewaterhouseCooper? Because that's the only explanation I could come up with for that joyless, airless, tense, inhuman ordeal of a Beyoncé concert.

The neurotic, sphincter-clenched pacing, which was perhaps some accountant's idea of how to keep things moving, made the whole thing indigestible: kind of a cross between "The Chronicles of Riddick" and microwavable White Castle burgers. The crucial human element was scuttled for the sake of some talentless vision of speediness, and even adding an extra heaping dose of earthy African-Americans to the audience didn't help.

I am 100 percent for high color contrast -- this is the only year on record I'm not complaining that there weren't enough people of color -- but it seemed like there was a strangely large and disproportional number of brown folks in the audience. This was like Oscar Goes to Inner City Public High School. There were African-Americans in the audience who had nothing to do with the film industry this year, at all. I mean, Jay-Z -- OK, he's the new Sun King -- he appears to have eaten Jack Nicholson whole and taken over his seat. Also, he had to keep a proprietary eye on his girlfranchise, Beyoncé.

But Oprah? P.Diddy? Prince? Lou Gossett Jr.?! They even snuck some Whoopi in there. I mean, it just looked forced -- an aggressive chocolate-coating on the audience.

OK, this is my personal conspiracy theory, but I always suspect the Academy of throwing the Oscars to the minorities when they just can't get it up to justify their own existence.

And America is at war. You could tell by the Empire Strikes, direly newscasty, Warrior Trumpets of Armegeddon power music they were using.

These are wartime Oscars, and they looked it: cheap, tense and cobbled together from graphics rations donated by the E! Channel. No frills, no batteries, no butter, no seat fillers and no entertainment -- just repeated overdoses of Beyoncé, who looked like a chandelier made out of Audrey Hepburns. (But she did sing in French, so now maybe France will officially condone the L'Oreal-esque creative Frenchness of her name and stop snickering at her decorative accent.)

Tim Robbins looked like he just woke up and went bobbing for apple bongs.

"Comedy Superstar" Jeremy Irons looked like his face has been soaking in a turpentine-based happiness remover.

I never thought I'd see an Oscars get edgy enough for Chris Rock to host them. These weren't them, really, but he was strong.

I took exception to the material the Rock dished out before the awards, though, about how no straight man has ever sat through an entire Oscars. This may be completely true, but I had to sit down and do some math: .Angry black man hosting, good. Angry black man making flip comments about homosexuals before the Oscars ... hmmmmm ...

Is this comedy "edgy"? Or is this where King Cobra swallows his own tail, and super-slick, lefty edge-pimps and ultra-right old fat boys suddenly play footsy under the devil's coffee table? Is this the Republican/Evangelical/Wolfowitz agenda in black sheep's clothing? Are the crackers and the darkies putting down their pitchforks and tying their bandannas together to play a little game of Smear the Queer?

Rock did more or less make up for these antics with some healthy Bush-whacking in his monologue, but still. These are spooky times; we have to tighten up.

The biggest argument I got in with my phone-support crew, most notably my dirty and scurrilous libel-meister "Wayne Brave," was whether or not that Catherine Zeta-Jones bit between Rock and Adam Sandler was a boner. I thought she actually failed to show up, because surely that ghastly, time-murdering disaster wasn't a planned comedy bit.

I thought maybe Catherine Zeta-Jones' knees got crow-barred backstage. I'm not saying by who, but we've all seen Biggie and Tupac, and I'm just saying, the LAPD can be paid to do anything.

The best supporting actor award went to Morgan Freeman, because they owed it to him. It was his fourth nomination -- a big catch-up Oscar -- essentially, the one he should have gotten for "Driving Miss Honky." The best performance by a dude in a supporting role was actually Thomas Haden Church in "Sideways." I love Morgan Freeman, but I hate that his characters are always preternaturally wise and never allowed to have a penis. Morgan Freeman is beatific and unthreatening; an African-American whose gentle presence has done a lot to help un-frighten white people over the years, which is good, I guess. But thank God we are now ready for Jamie Foxx, who released a press announcement to the tabloids a few weeks ago that nudie "art shots" of himself were stolen from his house; one tabloid commented that the stolen photos "proved that Foxx is one of 'Hollywood's biggest stars.'" Black male sexuality has always freaked Hollywood out, so this is a good sea change.

Cate Blanchett looked put-upon and squirmy, winning the best supporting Oscar for her Hepburn impression. Cate is great, but most people agree that there are eight drag queens in any major urban area who can do a better Hepburn.

Wayne Brave proposed that all the little, non-famous, art-and technical-award people should get half-size, mini-Oscars. I felt this would aptly illustrate the eye-rolling derision and exasperated loathing the Academy felt for the people who won these awards this year. Oscar could not bring himself to let these dirty little crew people onstage, perhaps out of some Howard Hughes-like phobia that non-celebrity is contagious. Blanchett and Scarlett Johansson presented the Lesser Awards on various handicap ramps in the auditorium; a subtle semiotic way for the Academy and PricewaterhouseCooper to say, to makeup artists and sound editors, Crawl back to Culver City and fuck yourselves for sucking precious camera time away from Renée.

These people felt robbed, and why wouldn't they, having to crouch in vans or in the janitor's closet or on folding chairs in Beyoncé's portable steam room before getting shoved out into the hot lights, tossed a trophy and abruptly silenced. People looked genuinely terrified by the time constraints, this year, when it came to their speeches -- Charlie Kaufman finally clued us in that Oscar winners, during their speeches, were being shown an "intimidating" 30-second countdown clock, which I then reasoned was interspliced with subliminal pictures of a .44 Magnum, interspliced with pictures of the speech-giver's family. Anyone on the design team who didn't get to the microphone first was reduced to a sad, mute jabbing at the air toward the balcony with their statuette -- the unhappiest batch of Oscar winners in history.

The lowest point of the evening -- which was actually the high point, because it was the only thing that sucked hard enough to be actually interesting -- was Hispanic Korner, where all the Latinos were quarantined. Salma Hayek and Penelope Cruz, representing the beeg teets of Meheeco and Espain, introduced one of the two musical numbers that didn't feature Beyoncé.....which shall henceforth be known as "!Banderas! : The Unquenchable Thirst for Shame."

Antonio Banderas, looking like he just took a swim in Julio Iglesias' sebum pond, was sitting in what looked like an adobe Mexican prison set, or El Grande Castillo del Taco Bell, braying with Carlos Santana, who was grimacing with simulated guitar-passion behind his Blueblockers. It was a Latin musical travesty to rival J.Lo's swan-dive into obsolescence at the Grammies. "J.Lo has finally found a duet partner!" said Wayne Brave. Jesu Christo. Next time, instead of letting Banderas disgrace himself to represent Hispanic culture, perhaps the Academy should just cut to a shot of stuffed bullfrogs dressed like mariachis. Or maybe a cute terra-cotta lawn sculpture of some drunk guys wearing sombreros, having a siesta. Or a piqata, shaped like a burro. Ai caramba.

Why was P. Diddy presenting an Oscar? Why? And why was he forced to say the utterly ass-punking line, "Listen up and hook into that inner child"?! Was this a public eclipsing? Did Jay-Z just devour P. Diddy, legend and all? P.Diddy looked frightened, small, embarrassed, exposed. He must now kill whoever wrote that line if he ever wants to be A-list again.

Best actress: Hilary again! I loathe those "Um ... I want to thank everyone I know ..." speeches. Say something about euthanasia, say something about the war, say SOMETHING. Don't use this 30 seconds of the world's attention to thank your lawyer.

Don Cheadle was clearly bummed out. Cheadle is a beautiful actor, but he didn't have the personal charisma to out-sexy Jamie Foxx this year. Jamie was very moving, when he won, talking about his recently departed cruel grandmother. Oprah gave him the black power salute, then looked around to see if anyone else was doing it with her. Cheadle wasn't.

"Ray" -- Jamie Foxx notwithstanding, not that good a movie, really.

Now, "Million Dollar Boobies": That was NOT the best movie of the year. That was the Champ, the Jackie Coogan, 1930s, gloves, tears, sweat 'n' snot classic, rewritten for a younger female and older male, who exercise their sexless intimacy through broken noses and mercy-killing. It was a solidly good film, but for me, it was like paying $325 a night to stay in a four-star hotel -- Clint, Morgan and Hilary are pretty much the gold standard, and if it you can't pull the wagon with those three majestic Clydesdales of the Thespian Craft, it has no wheels. That film had tasteful wallpaper, thick towels, a rose on the bedspread, and no real funk or character. But you can cry a world of hurt while watching that has nothing to do with the film itself, and I think that's why it won: It was cathartic. We're in a lot of collective pain, we're weary and confused, and Clint hit the right release valve. Big Daddy's going to put you out of your misery now, Tiger. You just rest.

"The Aviator," despite the fact that Leo DiCaprio still doesn't look anything like an adult, was the year's best film, in my not-so-humble O. -- expansive, sprawling, lush, highly capable entertainment. Scorsese ought to get some Hollywood props, now that he's more like Cecil B. DeMille than Sam Peckinpah. Gone is the angry young man who gave us the coke-fueled and gritty, abusive realism of 1970s yesteryear -- enter the respected and law-abiding elder, with the fat line of credit and the soft spot for Luxicolored Prettyscapes in Technifying Epic-scope, with a cast o' thousands. That's what America needs right now -- not fight, but flight.

What the fushizzuck was that Oscars, y'all?

Clint? How about you turn Oscar's ventilator off now, too? He's suffered enough.