By bringing beauty and style to Middle America, Martha Stewart has changed the way we live for the better. 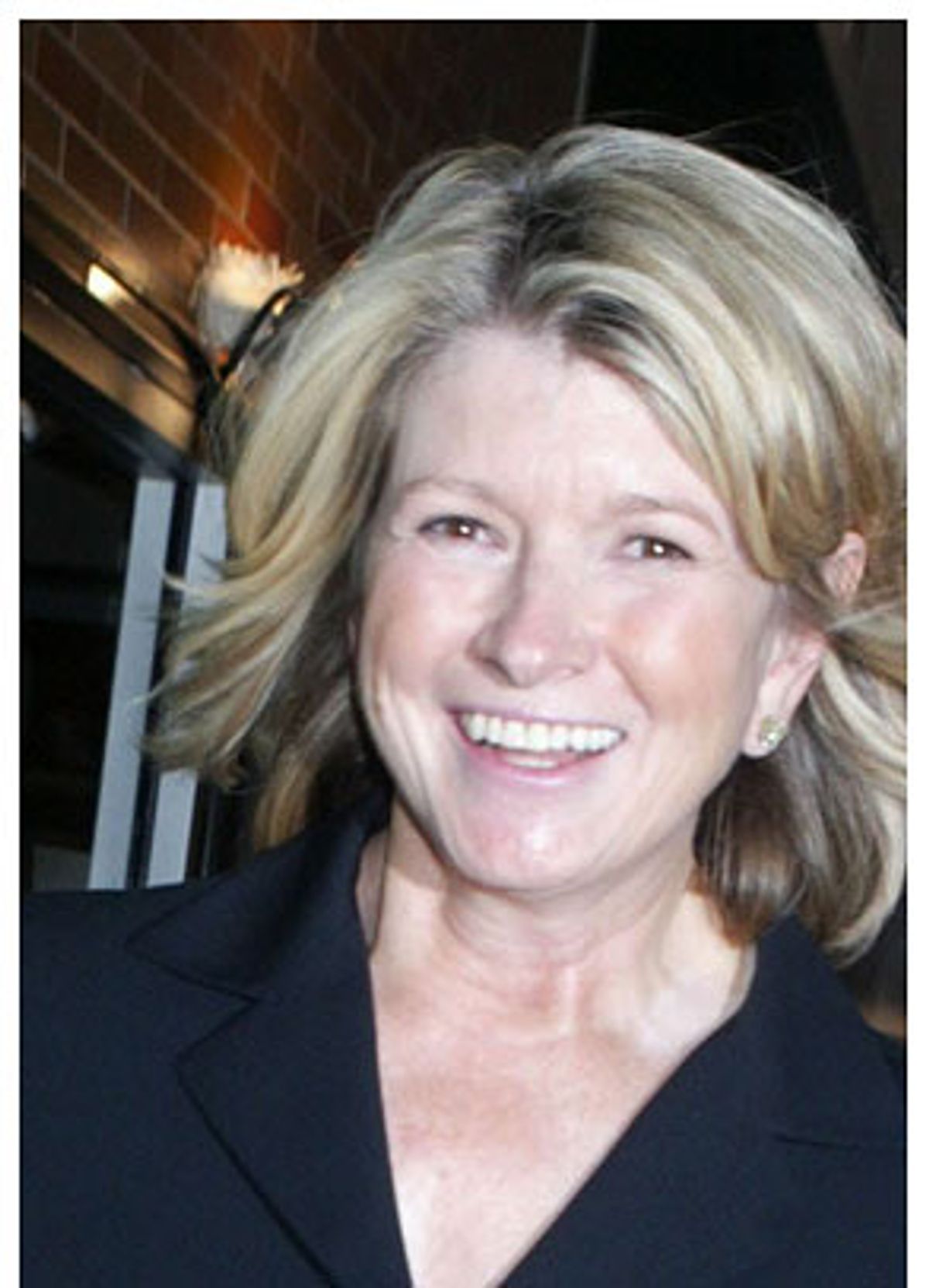 Martha Stewart, they say, is back. On the eve of her release from prison, a precious linen-lined gift basket of stories (including Newsweek's cover and a front-pager in the Washington Post) paint the homemaking guru as the nation's comeback kid. When she emerges from the West Virginia detention center, "Camp Cupcake," the stories go, America will have forgiven Martha for her sins -- not just the wee corporate scandals for which she was convicted but also the larger transgressions (consumerism, conformism, anti-feminism, snobbery) for which, during her rise, she was so often criticized.

Martha's return is certainly heartwarming news to her fans, a group in which I unabashedly count myself. We are relieved that our mistress, so mishandled by the media and especially by the government in the last three years, will be provided the soft landing of a Mark Burnett reality show as well as renewed stock-market billions. But then to us her comeback isn't surprising. Long before she went to prison, it was clear that her business, if not Martha herself, would survive -- and anyone who expected Martha's empire to crumble misunderstands her importance in the American consumer marketplace.

Martha Stewart is not, as many see her, just a shrewd woman who recognized that magazines and TV shows that teach us how to better decorate our homes might mean big bucks. Were she only that, she'd have been quickly replaced. No, Martha must be seen as a pioneer of a novel American business sensibility, a philosophy that recognizes a recent revolution in the way Americans decide how to buy stuff.

Specifically, Martha was among the first business people to capitalize on the mass public's increasing consideration of aesthetics -- of beauty, luxury, comfort and style. Martha also apprehended the blurring of the line between highbrow and lowbrow culture, and the emergence of what writer John Seabrook calls "Nobrow." In spotting these trends, Martha transformed herself from a mere tastemaker into an American corporate institution, closer to Starbucks than to Julia Child. Her critics can question her niceness, her ethics, her authenticity, her decorating skills, even her cooking. They can put out unflattering, unauthorized biographies, and they can throw her in the slammer. But Martha will survive because her business is based on a solid, innovative idea: Americans like Good Things™.

This new American appreciation for good things has been most deftly described by Virginia Postrel, an economics columnist at the New York Times, and the author of "The Substance of Style," one of the most fascinating business books of the last few years. As Postrel points out, globalization and technological advances have made it easy for companies to produce products that are cheap and that work well. But if every product is cheap and does its task -- if a toilet brush can be made in Asia for next to nothing -- how can companies make their specific products interesting? "In a crowded marketplace, aesthetics is often the only way to make a product stand out," Postrel writes. How do you charge more for a toilet brush? By making one with style.

A host of American companies have latched on to this idea. You can buy a toilet brush for a few dollars at any drugstore. But at Target, you can also buy an $8 toilet brush designed by acclaimed architect Michael Graves. And if you're really a showoff you can try Excalibur, the $32 toilet brush by French designer Philippe Starck. It didn't take Martha to push American businesses to see that they could differentiate their products based on looks. But Martha, Postrel tells me, was a pioneer in emphasizing Americans' aesthetic sensibilities. Before Martha, we certainly cared what our homes looked like. But how much did we care? Did we think about our toilet brushes? Would we have seen the need -- and you have to admit, there is a penetrating, cultural need -- for that stylish $8 scrubber?

Martha showed us the way. "She has done a lot to make consumers more aesthetically conscious in the goods they purchase and the things they do," Postrel says. Martha came along at just the right time -- the 1990s -- a time of iMacs and Bilbao -- when Americans began to open their eyes to the new look around them. "It was easier not just for consumers but for the media to focus on a specific person to describe the rise in aesthetic emphasis," Postrel says. "In that sense, she provided a helpful transition" to the new consumerism.

Postrel, who is a libertarian, celebrates rather than disdains the emergence of consumerist style, effectively arguing that fashionable products are good for society. Having a choice in toilet brushes isn't crass; spending $8 on one that looks good isn't immoral. Postrel believes that stylish goods allow us to indulge, and cultivate, our creativity, giving us room to express our personality through the things we buy. So while she appreciates Martha, Postrel is also a bit critical of the style guru for putting forward a top-down aesthetic ideal, one that "emphasizes an aspiration to be like Martha as opposed to being like yourself."

This is a valid point, as some Martha fans no doubt do prefer to be Martha, or at least to worship her blindly, rather than express their own sense of style. But maybe the impulse to be like Martha isn't so bad -- maybe we need her guiding hand. After all, the spread of style across the American consumer landscape in recent years is not an entirely easy thing for many people to understand or know how to navigate. Even if Martha at times may stifle our consumerist creativity, don't many of us appreciate the way she guides us through the crowded marketplace of stylistic choices?

Seabrook -- whose book "Nobrow" argues that mass culture has become a source of status rather than the antithesis of style -- seems to see Martha in this way. In a world where labels like "highbrow" and "lowbrow" have lost all meaning, where the work of an architect like Graves can be found at Target, it's difficult to know what "taste" is. No longer is a well-made item the epitome of good taste. Nor is an expensive item always better-looking and in "better taste" than a cheap one. In Nobrow reality, we need tastemakers, and Martha, Seabrook writes, is at the forefront of this group.

"Stewart is saying, in effect, that if you follow these complicated and time-consuming instructions -- if you put this parchment under your tablecloths, and put these rose petals in the napkins, and set out these different bits of colored glass in wooden bowls on the table -- then you'll have good taste," Seabrook writes. "Having access to Stewart's taste is like having insider information. It used to be that only the élite had access to insider information." Now, thanks to Martha, everyone can have it.

Seabrook, who was writing before Martha went to jail, when the worst that could be said about her was that she was mean, added that it isn't a "blot on her authority that, according to the biography by Jerry Oppenheimer, 'Just Desserts,' she is foulmouthed and dirty-minded. Just as people can deplore Clinton's morals and like him as a President, so people can deplore Martha's crassness and commercialism and like her as a tastemaker."

Martha's prison stint only underscores this point and points out the innovativeness of her business. The fact that her empire hasn't been knocked out by her conviction, and even appears to be the rise, shows that it's not based solely on her image or on the impeccability of her ethics. Martha's business is built, instead, on a deeper idea, one at the heart of the new American culture: that material goods are ultimately expressions of personal taste.

When you choose the lampshade you'll put in your living room, or the bottles where you'll store your dishwashing soap, or even what you'll eat for dinner -- you're saying something about yourself. If you decide to forgo a meal at McDonald's in favor of a recipe in Everyday Food, Martha's newest magazine, you're saying something about your sense of style, grace, gentility, culture. Your taste.

Maybe we always understood this; it certainly seems like common sense that consumption equals self-expression. But figuring out what and how to consume -- how to express yourself -- isn't easy, and Martha should be thanked for democratizing taste. In the same way that Starbucks brought lattes to the heartland, Martha brought taste to the masses, making style a commodity that we could all enjoy, provided we put enough time and effort into the matter.

As long as Americans care about image -- an axiomatic proposition -- we can count on Martha to guide us through the elements of style.