The good, the bad and the fugly

A new fashion buzzword denotes monstrous sartorial sins -- like guys with curly hair who wear mullets. Are we in the golden age of bad looks? 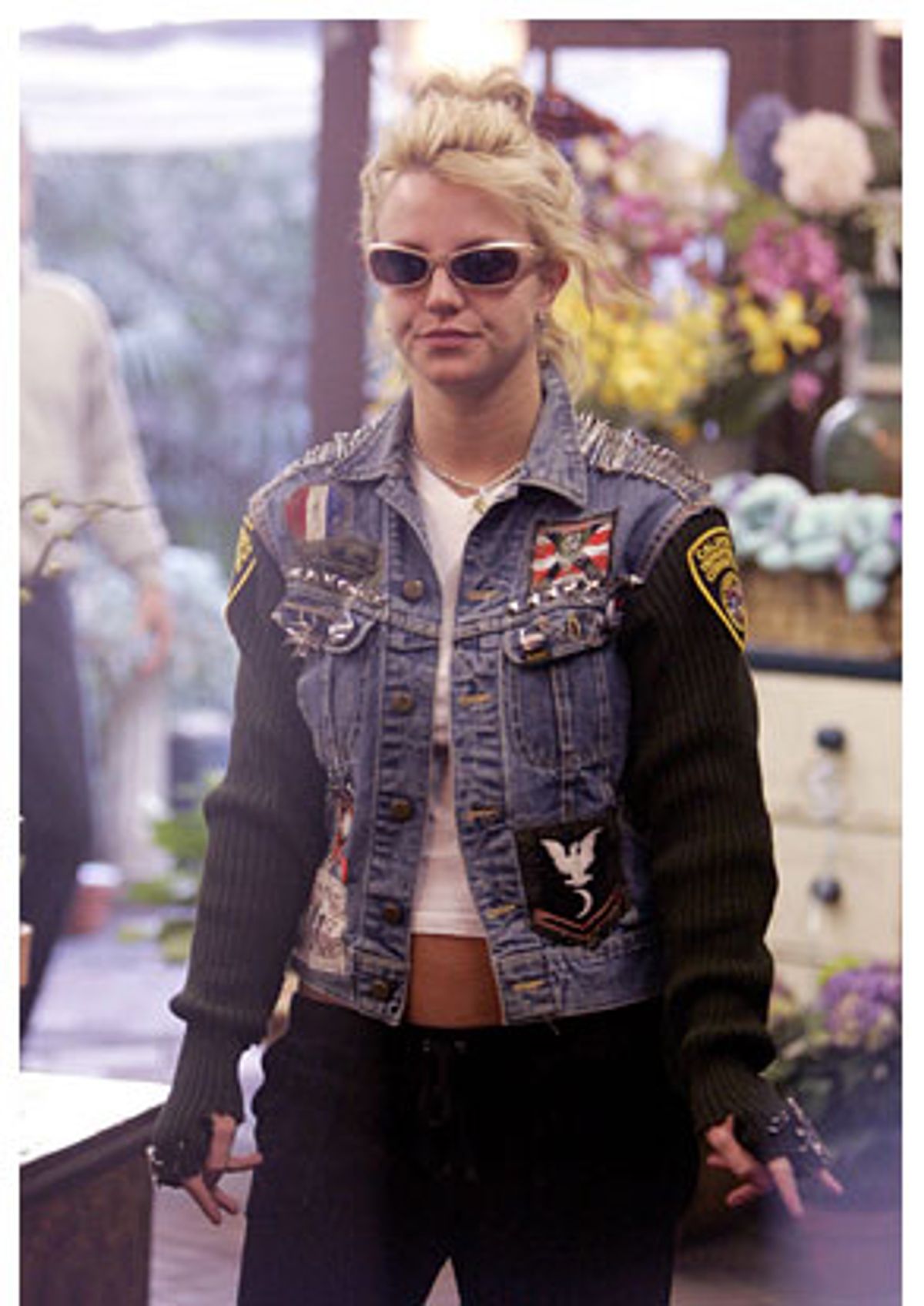 The latest addition to the lexicon of the stylish isn't "metrosexual" or "Jewfro" or even "murse" (man purse), all of which are as passi as "bling." It's not exactly a new coinage, but one that has gained a foothold thanks to a certain fuzzy Australian boot. It is not pretty. It is ugly. In fact, it is fugly.

"Fugly" (short for "fucking ugly") may be schoolyard slang, but it's also the buzzword for countless Web sites and blogs, including the high-profile Go Fug Yourself and the inevitable Am I Fugly or Not? Web site. It's even responsible for the name of at least one band. In fact, according to Simon Doonan, creative director of Barneys New York, in the last year "fugly" became "common style parlance."

But what exactly does it mean to be fugly? Is there a formula, a certain pattern to be avoided, like the Tommy Hilfiger label? How does one go from being merely unattractive and unappealing to a state of hideousness so severe that it even sounds revolting? Why do celebrities do it so often? And why do we care when they do?

Like a lot of today's worst trends -- spiraling debt, overproduced pop music, Donald Trump -- "fugly" dates to the early to mid-'80s, says Grant Barrett, project editor of the Historical Dictionary of American Slang at Oxford University Press. Earlier citations probably exist (consider that Norman Mailer used "fug" as a replacement for the banned "fuck" as early as 1948's "The Naked and the Dead"), but they fall into the Dark Age known to lexicographers as "pre-Internet."

Likewise, coinage is virtually impossible to determine, but there's no doubt that the "F" in fugly stands for that most favorite of four-letter words. ("If anyone tells you otherwise, they're wrong," promises Barrett.) It's hard to tell whether "fugly" is being used more lately, although there were a flurry of references in 1998, when "Babe: Pig in the City" came out, thanks to the character Fugly Floom, played by Mickey Rooney (draw your own conclusions).

Doonan, for his part, uses it often, to describe everything from Britney Spears ("Queen of the Fuglies") to the robot charms on Prada bags. And for Jessica Morgan and Heather Cocks, the two reality TV producers behind the Go Fug Yourself site, which hilariously skewers celebrities who have, stylistically speaking, fugged up, it's become a sort of calling card, their mot juste for nearly any occasion. It's a verb, an adjective, a noun -- but is it worse than ugly?

"Being ugly implies a plainness; there's no shock to it, and there's no sense of being taken aback by something's hideousness," wrote Cocks, 27, in an e-mail. "Ugly is straightforward. But when you're fugly, you are fantastically, furiously ugly -- the level of atrociousness is more of a shock -- 'Oh my GOD, what was she THINKING? Oh NO!'" (Picture a barefoot Britney in a public bathroom.) "That, to me, makes fugly a notch or five worse than ugly."

Calling someone out on it, she adds, "is just our way of pointing out to them that they've had a hand in their own sartorial idiocy."

So if ugly is a birthright, then fugly is a choice -- one that more and more people seem to be making.

"We're in the midst of a fugly moment in fashion," Doonan told me in a phone conversation from Palm Beach, Fla. (which he rated only occasionally fugly). "I attribute it to Uggs."

In fact, Uggs -- the Australian trend that, like Kylie Minogue, won't die -- are so closely associated with fug that they're almost like its visual shorthand.

Maybe it's because both seem Muppet-like, says Sarah Federman, 28, an advertising exec in New York and Toronto and a fugliophile. "Fugly sounds like a great cartoon character," she theorizes. "'Fugly and His Friends.' 'Fugly Goes to Camp.'"

Exactly, says Doonan. "Fugly is sort of an infantile, cartoony adjective, and it applies very nicely to things that themselves are very infantile and cartoony -- e.g., Uggs."

But fugly goes beyond footwear; it's a whole aesthetic.

Paris Hilton's X-rated manga look is one example of fuglification, but there are many more.

"Men who have curly hair but have mullets," says Sveta Srinivasan, 26, a brand strategist from Brooklyn, N.Y. "Anyone who wears crushed velvet. Melissa Rivers."

When it comes to celebrities, though, fugliness is often in the eye of the beholder. Morgan and Cocks, who parlayed their cattiness into a gig critiquing Oscar outfits for MSNBC, often focus their gaze on stars who have been anointed fashionistas by the Vogue crowd. (In fact, Cocks once fugged Anna Wintour herself.)

"There are these celebrities who are being promoted to the public as being worthy of admiration and imitation when really they look totally insane," says Morgan. "Maggie Gyllenhaal dresses like a lunatic half the time." Chloë Sevigny may be beautiful, but according to Morgan, she's no icon: "All she's doing is wearing a large men's Hanes Beefy Tee." Kirsten Dunst is a favorite target, too, for her penchant for wearing socks with sandals.

But -- and here's where I get nervous -- I've worn socks with sandals. Often. As has probably half of New York's glam downtown crowd. And the New Yorkers I talked to didn't find anything offensive in Sevigny or Gyllenhaal's offbeat style, so contrary to the L.A. uniform of sexy jeans, flirty top and flashy sandals. Is there maybe an East Coast-West Coast style divide at work here? (Go Fug Yourself is L.A.-based.) Are the Fug Girls, as they're known, prejudiced against the fashion forward?

"Whenever it's slightly idiosyncratic, I think they pick on them," says Emily Kofsky, 28, a Manhattan marketing manager and reader of Go Fug. "That's what the girls dress like on the Lower East Side."

"We do sometimes get e-mails from people who say we don't appreciate people who take fashion risks," admits Morgan, who considers Gwyneth Paltrow a fashion role model (despite her bad posture). "I understand the point they're making and I actually do appreciate more avant-garde stuff, but I think there's a place for it." (Hint: It's not the red carpet.)

It's true that far-out fashion can seem ugly at first, says Doonan (though, as the author of "Wacky Chicks: Life Lessons From Fearlessly Inappropriate and Fabulously Eccentric Women," he appreciates it). And though I shudder to think what the Fug Girls would make of New York party fixture Sylvia Miles, they do claim to be geography-blind bashers.

"People come to L.A. and figure it's a perfect winter climate for miniskirts and Ugg boots; hence, fugly trends are born," offers Cocks. "But every city has its curiosities and its massive mistakes. If I lived in a so-called fashion capital, like New York, I still wouldn't appreciate Chloë Sevigny's wardrobe as art."

Of course, the Fug Girls aren't alone in judging the far-out as far off; magazines like Us Weekly and Star have created a whole cottage industry around rating celebrity fug, both in candid "just taking out the trash in my velour sweat suit/hot pants" paparazzi shots, and sanctioned publicity photos, which suffer commentary from a panel of people who are probably sitting at home in their underwear.

Why is it so interesting -- and off-putting -- to see stars have a stylistic lapse?

"A fugly man that you see walking down the street might only offend people here and there -- he might only offend me once in my life," Srinivasan says. "But celebrities are everywhere; they could do it so much more often. For example: Carrot Top."

"I think celebrities are worse because they have a responsibility to be appealing," she adds.

Morgan thinks the lifestyles of the rich and famous should be a sort of fug repellent.

"If you have everything these people have you should be able to go out of your house without looking like a lunatic," she says. "Either they don't care, or they kind of have no clue."

But true cluelessness should draw mercy, not ire; carelessness, on the other hand, telegraphs a kind of hateful arrogance, a suggestion that the offender is beyond reproach, sartorial or otherwise. ("Vanity is the quicksand of reason," said George Sand.)

"I think celebrities are so comfortable looking good that they don't realize that they can look bad," concludes Federman, the advertising exec.

There is a certain schadenfreude in seeing Jennifer Garner look like a linebacker in a full-size doily.

Judy McGuire, a dating columnist for the New York Press and the Seattle Weekly, has a so-bad-it's-good stance on celebrity fug-pas: "I love looking at celebrity fugliness because, sure, that person may be hotter, richer, skinnier and more famous than I'll ever be, but at least I'll never be caught dead in shearling hot pants," she wrote in an e-mail.

Besides, isn't presenting stars in all their fuglory a sort of backhanded compliment, an elevation of the very behavior that it denigrates? After all, fuggery apparently sells magazines -- "The Olsens' Worst Outfits!" frothed a recent cover of Us Weekly (subtitle: "Billionaire$ or Bum$?") -- and listing the fugliest of their time has kept the otherwise-unoccupied Mr. Blackwell around for 45 years.

"It's never the swans that get copied," Doonan asserts. "It's the fugly girls." (Mary-Kate, style icon?)

"'Fugly' is like an infantile version of the French 'jolie laide,'" he adds (the phrase literally translates to "pretty ugly"). "It's a mistake to use it in a derogative way. Good taste and bad taste are irrelevant when it comes to confronting fugly. It's not a pejorative, it's a fact."

For all her fug-bashing, Morgan admits to some ambivalence about seeing her favorite subjects, like Sevigny, clean up well. "When she shows up looking great, I feel like, 'Oh, she looks great, and I'm really happy for her,'" she says. "But then I'm kind of disappointed that she's not wearing a crazy outfit."

"There's something very right about a person who embraces their fugliness," agrees McGuire. "Where's the fun in being ordinary?"

Even harsh judges like Srinivasan aren't immune to fug love. "Just because you deem someone fugly, doesn't mean you can't celebrate something about them," she says.

As long as they're not wearing Uggs.