What the tsunami dragged in

Still sorting through the debris in Sri Lanka, officials are uncovering the explosive legacy of a wartorn area: Land mines. 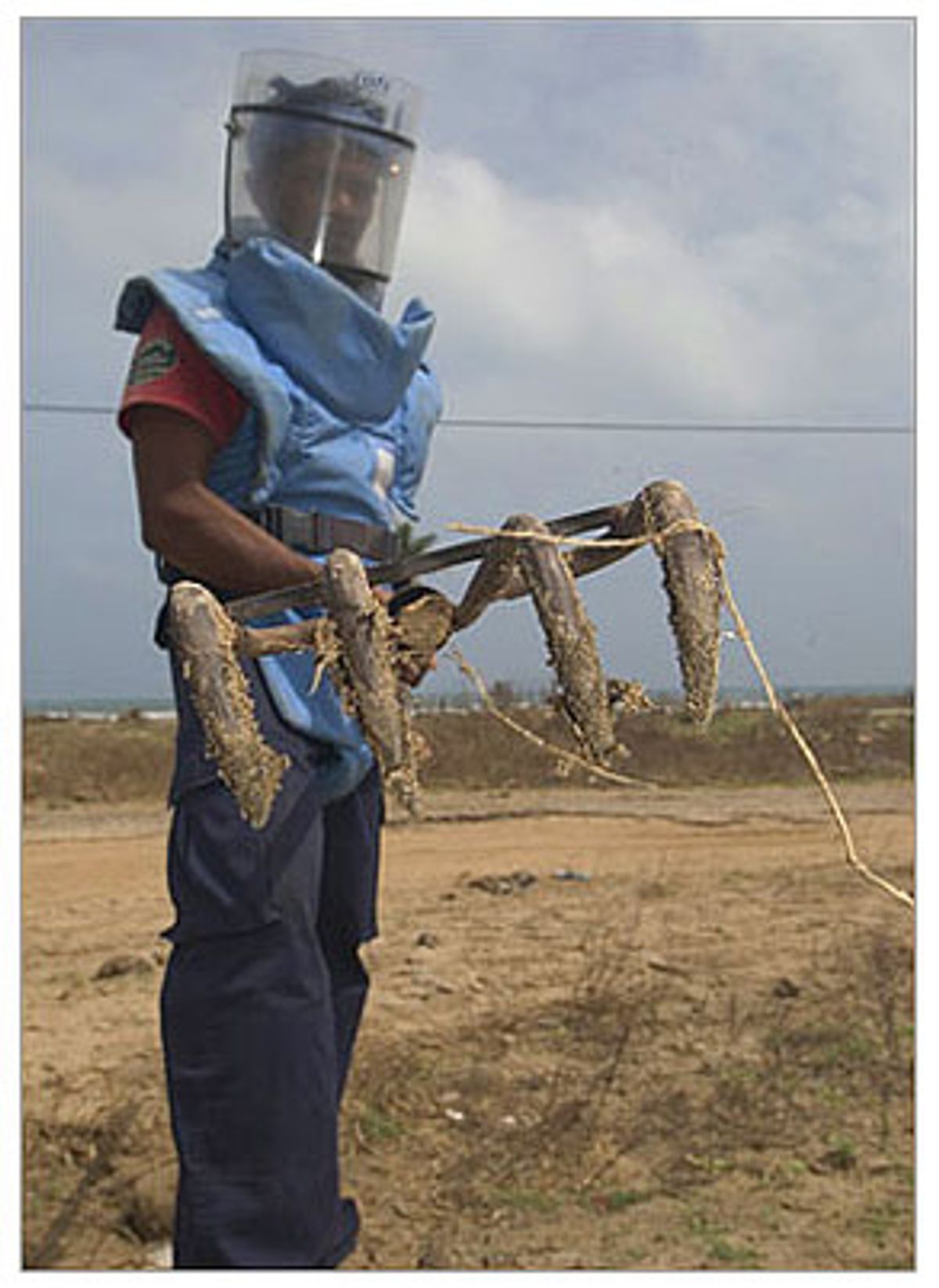 When Naba Vavuniyu goes to sleep at night, the monsters under his bed are real.

A handsome 23-year-old, Vavuniyu is a team leader with the Danish Demining Group in Kuchchaveli, on Sri Lanka's northeast coast. For $110 a month -- roughly the salary of a high school teacher in this underdeveloped country -- he spends four hours each day combing the village streets and pastures for mines uprooted by the tsunami.

To date, there have no reports of Sri Lankans killed by the newly exposed mines. The only victim has been a cow that wandered into a clearly marked minefield. Yet 94 P-4 mines -- the size and shape of hockey pucks, with a plunger on top -- have been recovered. Most have been detonated. But several dozen, their fuses removed, are stored in a red wooden crate beneath Vavuniyu's bed.

"There's no place else to put them," he shrugs. The deactivated mines, he says, pose no hazard, unless the temperature in the barracks rises above 80 degrees Celsius (176 degrees Fahrenheit).

No one knows exactly how many mines were scattered through Kuchchaveli by the tsunami; the records from the nearby Sri Lanka Navy base, where the devices originated, were lost in the flood. Vavuniyu's best guess is that some 850 Pakistan- and Chinese-made mines were washed inland out of minefields and storehouses. Some ended up in the local schoolyard. Others were found lodged in trees, hidden between boulders, or buried under the sandy soil. Ramesh Kumar, a field officer mapping out the danger areas, says he's found mines floating in wells.

Mines, as well as UXO (unexploded ordnance, which includes live bullets, rockets, mortars, artillery and fuses) have long been flies in the ointment of this island paradise. The danger zone is the northeastern coast, where the simmering conflict between the government and Tamil Tigers (the LTTE) has cost 60,000 lives -- twice the toll of the tsunami. The government has admitted that it planted about a million mines to combat operations by the separatist rebels. There are no figures from the Tigers themselves, but the United Nations estimates that the LTTE has buried another half million mines. As for the UXO count, that's anybody's guess.

"It's a very serious problem," says Judy Grayson, of UNDP Mine Action. "It's not on a par with a place like Afghanistan, where there are many more mines. But it's a huge problem for people whose houses are endangered, or for kids who can't go to school because of the mines and UXO that have washed up into the schoolyards."

Ironically, there was a rash of civilian casualties (15-20 per month) right after the 2002 cease-fire. That's because previously restricted areas, like highway A-9, which connects the northern city of Jaffna with the rest of the island, was reopened after 20 years and people started moving through heavily mined areas.

Beneath their flak jackets and helmets, DDG members wear color-coded shirts: yellow for the team leader, orange for section leader, green for medic. Deminers wear red, and drivers blue. The rainbow of colors seems deceptively cheerful as Vavuniyu and his co-workers use primitive tools to unearth the weapons. Working with hand rakes and probes beneath the sweltering sun, they will examine every centimeter of Kuchchaveli's 2 square kilometers.

Paul Boncz, a former Swedish army lieutenant who, until 2000, was teaching soldiers how to lay mines, is the technical advisor for the multiethnic team of 400 Sri Lankans, some of who are working in the country's eight other hot spots. An unlikely figure in his jeans and worn-out T-shirt, the lanky Boncz looks more like a beachcomber than an unexploded-ordnance expert.

Each of the P-4s, he says, holds 32 grams (just over an ounce) of plastic explosive.

"When one of the mines ignites," he explains, "it sends shrapnel flying upwards at a speed of 6,000 to 7,000 meters per second, at a temperature of up to 4,000 degrees Celsius. It sounds lethal but it's usually not. That's because the idea of these mines is not to kill but to maim; that's because six to eight people are needed to deal with a single wounded. So the idea, really, is to decimate the troops. Mines blow up feet, legs and hands, while the aftershock blasts sand and dirt into the wounds and genital area, destroying muscle tissue."

Every step taken in Kuchchaveli is taken with care. Even the cleared areas are approached with caution; what if a mine slipped through the dragnet? Treading lightly, I make my way to the local school, where mines were recovered from the playground. Outside are a series of cartoon posters in Sinhalese and Tamil, showing a pigtailed girl pointing in alarm to stray mines, mortars and rockets. Behind her stand a parent, a cleric and a teacher.

"If you see something suspicious," the caption reads, "report it to your elders!"

In the empty classroom, the scene is equally grim. Instead of wildlife posters or world maps, the walls are plastered with mine identification charts. A poster showing six mines invites kids to match each one with its name and country of origin.

The beach, 100 yards away, is bisected by a fence, emblazoned at regular intervals with skull-and-crossbones warning signs. A short distance away, cement is being poured for permanent signposts and fences, marking the areas where the Sri Lankan navy will keep their existing mines in situ. (The army and navy deal with mine clearing on their own bases.)

Near the remains of a Hindu temple, I meet a team leader who asks to be called Peter. He's a black-haired, fierce-eyed team leader from Jaffna, the heart of the country's ethnic strife. Peter joined the DDG in July 2004, well before the tsunami. He's exasperated by what he's seen.

"Some records say there are more than 1 million mines in the north and east," he affirms. "So If we clear 100 mines in this place, it's solving .01 percent of the problem.

"Look around this village," Peter says, gesturing at the dirt streets, shambled homes and thin cattle. "This is one of the effects of this war. People in these areas are not well educated. The one thing they do get is mine education.

"We want to do something for the motherland," he asserts. "But we're frustrated. What's the use of our effort, unless the government and rebels agree not to lay more mines? All this money, all this labor, all this time. It's pointless. If there would be a peace agreement between the government and the LTTE, we could make real progress." This government, he pronounces bitterly, "is bullshit."

Although the DDG will soon wrap up its operations in Kuchchaveli, they'll continue their work in 27 other areas. There may come a point when a mine ban in Sri Lanka is realized and the monsters beneath Naba Vavuniyu's bed vanish. Meanwhile, several major nightmares persist.

"First," Grayson says, "there's no actual peace agreement between the country's warring factions, just a cease-fire." Also, during the two years since the cease-fire, the government has been juggling an awful lot of issues, and that was before the tsunami. They've stopped planting mines, and for now, that's good enough for them. The ban just isn't a priority.

The process gets even more complicated when it comes to the "dangerous areas" still under LTTE control. There, an independent demining group run by the Tamil Rehabilitation Organization pokes and prods the soil. It's a tangled web, woven through decades of suspicion and resentment.

Nimbly, the UNDP supports demining efforts on both sides. "But it's difficult," Grayson allows with an audible sigh. "They're living in a very complicated place."