Who killed Dan Rather?

Bloggers are claiming their first scalp. But the old media isn't dead yet -- and the new media can never replace it. 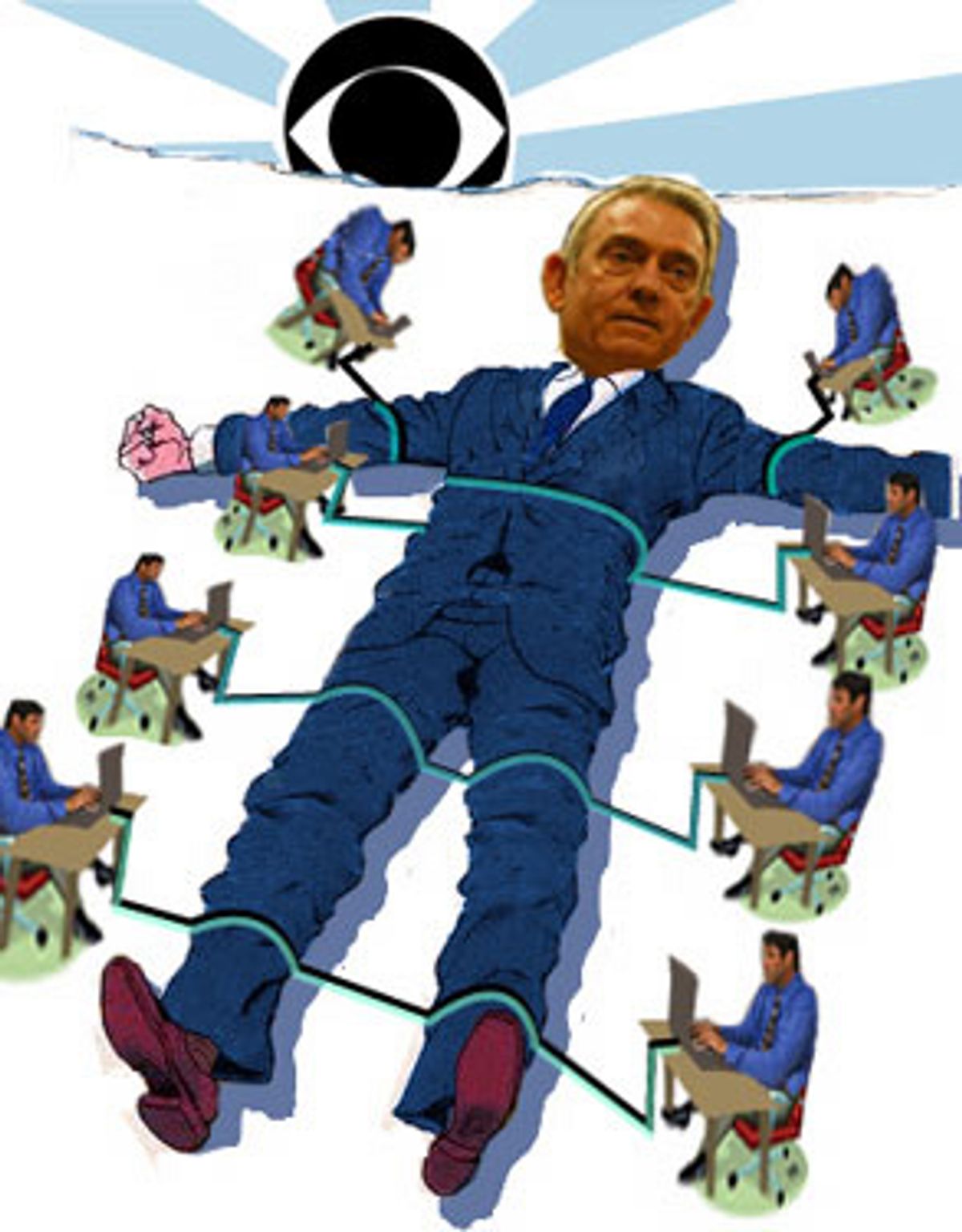 It's reflexive, irresistible: When Dan Rather says goodbye Wednesday night, some trend watchers will tell us it marks the end of one form of media -- big media, corporate media, old media and, according to some, liberal media -- and the emergence of a new one, ruled by a populist, disintermediated chorus of citizen journalists who live in something that's been badly labeled "the blogosphere."

We all know the narrative: Within hours of Rather's Sept. 8 "60 Minutes Wednesday" segment, on allegations that President Bush got special treatment in the Texas Air National Guard, bloggers began unraveling the story, pointing particularly to problems in key source documents that seemed to indicate they were forgeries. (Problems that came to light, ironically, when CBS posted the documents on the Internet, where they could be instantly scrutinized by millions.)

Dan Rather is retiring because he's 73. It comes as a shock because CBS did a terrible job of succession planning. He's retiring a year earlier than he wanted to, but probably five years later than he should have. In Ken Auletta's dishy New Yorker piece last week, Walter Cronkite takes a few shots at him, and even supposed admirers like Mike Wallace and Andy Rooney admit they don't even watch him.

I don't either. I don't watch any of the nightly news shows anymore. Like a lot of people, I'm still at work when they come on, and they don't really merit TiVo. When I have my choice it's Peter Jennings. He's soothing. Rather has always kind of alarmed me. I'm not alone. The CBS anchor's ratings have been shrinking -- he's long been No. 3 -- and the networks' news shows along with them. In Auletta's profile, we learn what we mostly already knew, but the numbers are still shocking: The average age of the big three's viewership is 60. Only 8 or 9 percent of the crucial 18-34 demographic watches network news. This is media death.

So let's be clear: Rathergate may have hastened Rather's departure, but it didn't cause it. Which is not to say it wasn't a scandal. The story of how CBS ran with the Sept. 8 Bush report is an awful chapter in journalism and reveals terrible flaws in the news organization. I want to hand CBS's investigative-panel report on the mess to every new hire at Salon; it should be taught at every journalism school.

But it's possible to lament the handling of the National Guard story loudly without concluding that it either proves the mainstream media (MSM) is hopelessly corrupt and necessarily dead, and/or that the blogosphere is what tells us both things are true.

The CBS Guard story was a train wreck. Every journalist who reads the 224-page independent-panel report on it will cringe and shudder. Any reporter, editor or producer who has ever looked at the clock when making a decision about whether a story is ready for publication or broadcast will vow to hide all the clocks and watches in the future.

For those who didn't follow the mess, CBS relied on a central source, former Texas Air National Guard Lt. Col. Bill Burkett, for documents that allegedly showed a former Bush Guard superior complaining that higher-ups had forced him to "sugarcoat" the Houston scion's mysterious failure to take a physical and continue flight training. There had been whispers and rumors about such favoritism for years -- the producer, Mary Mapes, had even started reporting out the bare bones of the story in 1999, when Gov. Bush was getting ready to run for president.

This time, Mapes thought, she had the goods. It should be noted that Mapes takes issue with the CBS panel findings, and there may well be more to the mess than is captured there, but what's there is damning. Although the broad outlines of the story may turn out to be true -- there's plenty of evidence Bush got unusual treatment after he disappeared from the Guard -- the CBS report didn't prove it. The report breaks down four key problems in the network's pursuit of the truth.

That's what seems true about what CBS did wrong. Here's what isn't true:

I don't begrudge the right its newfound vigor on the Web -- and indeed, the left is learning, using blogs to publicize the mystery of Bush's mysterious back bulge during last year's debate, and more recently to bring down good old "Jeff Gannon," the faux reporter from Talon News who got a White House press pass to lob softball questions using a phony name. But activism isn't necessarily the same as journalism.

I feel like a traitor to new media in admitting I'm a little alarmed by the glee in some corners of the blogosphere about the stumbles of the MSM, particularly CBS News and the New York Times in the wake of Rathergate and the Jayson Blair mess. In Auletta's piece about Rather, he quotes a network executive saying there's no network news without the New York Times, because the paper devotes far more resources to reporting than the networks do, and the networks frequently just grab leading Times stories for their own leads. While there might be a blogosphere without the Times and the rest of mainstream media, it's safe to say it would be enormously less important and interesting. And the blogosphere alone is incapable of providing us with a full picture of the world, or of doing the sort of long-term, often unrewarding but occasionally world-changing investigative work that blogs just can't support.

Maybe it sounds quaint or backward looking, but at its best, the process of news gathering is expensive, it's time consuming, and it's a collective process, with reporters going off on hunches and editors reining them in and fact-checkers bringing skepticism, and in the end, some stories being killed or postponed, as CBS's Guard segment certainly should have been. The blogosphere is unlikely to completely substitute for ambitious, muscular, well-funded news organizations going after the truth all over the globe day after day. And when some bloggers at a recent Harvard conference roasted Times managing editor Jill Abramson for pointing that out, they showed their own arrogance, which we know is fatal in truth-tellers (many bloggers have told us so; just Google "Dan Rather" and arrogance). I'm rooting for the reform and reinvention and increasing relevance of the MSM; I'm not rooting for its demise.

At the same time that Rather is stepping down, a Superior Court judge in California is deciding whether bloggers are entitled to the same protections as journalists when it comes to anonymous sources, after Apple Computer sued to discover the names of those who disclosed company information to three bloggers. I'm inclined to say they have to be, I don't know where we would draw the line, but I don't think anyone should pretend there's no complexity to the issue. It's a lot easier for, say, an Apple competitor to set up a blog to defame and undermine Apple, calling it "journalism," than to place someone inside the New York Times technology department to do the same thing. And already we see how easy it is for partisan hacks to pose as citizen journalists targeting Dan Rather or John Kerry, or President Bush, for that matter, when they're really just peddling rumors and lies.

At their best, news and politics bloggers fuse journalism with activism and passion, like the late I.F. Stone who, with guts and determination, and armed with facts, exposed layers of corruption in politicians and institutions. Given that the media itself -- notably broadcast news and the newspaper industry -- has become another lumbering institution, often sacrificing fearlessness to the bottom line, furious bloggers, beholden only to themselves, provide a needed jolt of adrenalin. Meanwhile, let's remember that bloggers didn't do Rather or CBS in -- CBS, and to a lesser extent Rather, did.

What the mainstream media can still offer its audience is a commitment to some version of the truth and an organization and infrastructure that goes out and finds it. Yes, CBS failed on both counts in this case, but it doesn't mean the goals aren't worth having.

And some bloggers today only play journalists on the Web, without the commitment to fairness and accuracy that still distinguishes the best of the MSM. Just as time and timeless journalistic principles revealed the flaws in the CBS report, so too will they weed out the pretenders in the blogosphere. The truth always wins, eventually.