Ari Fleischer: Still saying nothing after all these years

The former Bush White House press secretary's memoir is long on praise for his boss and criticism of the "liberal" media, and short on revelations. 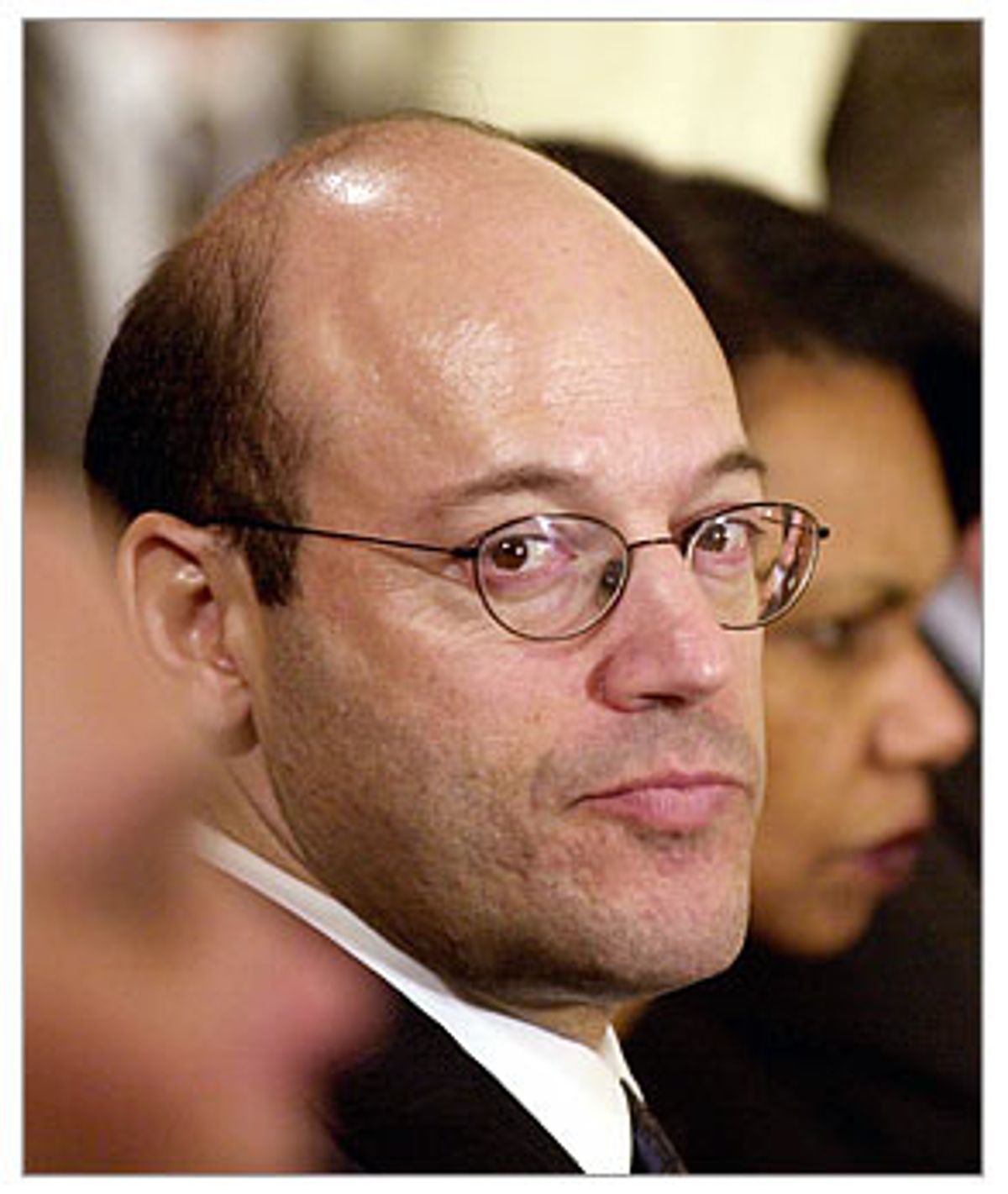 Historians curious to learn more about the inner workings of the Bush White House probably know better than to hope for much from Ari Fleischer's new book, "Taking Heat: The President, the Press, and My Years in the White House." The former White House spokesman who earned his stripes by telling beat reporters as little as possible during his two and a half years behind the podium, before stepping down in May 2003, offers up little in the form of fresh analysis. Instead, readers learn Bush was committed to ousting Saddam Hussein, upset by the corporate Enron-like scandals, and a really great boss: "President Bush runs a very inclusive, tight ship. He is one of the most uplifting, personnel-oriented, tough, demanding, humorous bosses you'll ever find."

If there is a disapproving word, phrase or sentence in the book about the White House, it's well hidden. That's no surprise, given the military-like loyalty that runs through his White House. (Former treasury secretary Paul O'Neill being the one exception to date.) Not willing to break any new ground dissecting the White House, Fleischer sets aside large chunks of "Taking Heat" to analyze the press.

His thesis is that the press has been tough on Bush, not because it has an inherent liberal bias, but because it's too focused on conflict. At least that's Fleischer's diplomatic cover story. But it's obvious that half an inch beneath the surface, Fleischer signs off on the right-wing consensus about a Democrat-leaning press corps that does not treat Republicans fairly. He refers again and again to the press's liberal tendencies, even making the odd suggestion that it's the media's fault more conservatives don't become journalists. "The field of journalism only hurts itself when so many people who enter it come from a similar ideological point of view," he writes, stopping just short of endorsing a newsroom affirmative action-type program for college Republicans.

By no means a tell-all memoir, "Taking Heat" does include a few curious nuggets. Fleischer, whose entire job revolved around dealing with the press and tracking its work, describes himself as an "avid" reader of the news, yet he reads only "three or four newspapers a day," which may be three or four more than his former boss, but likely two or three fewer than what most congressional staffers review each morning. Such was the accidental tourist nature of being this administration's media point person. As one White House reporter told Salon at the time of Fleischer's departure, "Ari had an impossible job. He was supposed to talk to the press in a White House that does not talk to the press."

Elsewhere in "Taking Heat," Fleischer, who chastises the press corps for not checking its facts, writes matter-of-factly that the bungled CBS report on "60 Minutes Wednesday" last September was based on "forged" documents, an inaccurate statement. In January, the independent panel set up by CBS to investigate the matter reported it could not conclude that the documents were forged.

The book is filled with curious omissions. There's no reference to Fleischer's now famous -- and ominous -- warning to a White House reporter who early in the administration asked a pointed question at a briefing. Afterward, Fleischer called the reporter at his desk and notified him his question had been "noted in the building."

And there's also no mention about how Fleischer, along with off-the-record White House aides, helped fan the flames of a fabricated 2001 scandal about exiting Clinton staffers who allegedly trashed the White House. Just a week in office, Fleischer piqued reporters' interest by confirming the acts of vandalism were being "catalogued," while aides lavished journalists with descriptions of phone lines being cut and trash strewn all over the West Wing. (The General Accounting Office looked into the matter and concluded those wild accusations were false.) Nonetheless, Fleischer writes, "Through my first six months on the job, the press repeatedly tried to bait me into a fight with President Clinton on a variety of issues. I tried hard not to let them create a conflict."

Of course it was the Houston Chronicle (which backed Bush in 2000) that once noted about Fleischer, "Perhaps not since Ron Ziegler made inoperative statements on behalf of Richard Nixon, however, has a press secretary exhibited such a brazen and cavalier disregard for the facts."

As for his media analysis, if Fleischer were addressing only a conservative audience, his readers might not expect his argument about the press to require supporting evidence. The "liberal media" myth is entering its fourth decade of active, endless and professional repetition. But no doubt hoping that his book will be taken seriously beyond talk radio circles, Fleischer sets out to try to document the press bias, how it has been unfairly critical of Bush and adopted a double standard when the Republican moved into the White House. Not surprisingly, given the rampant timidity with which the press has treated Bush, that's when Fleischer's troubles begin.

On page 13, in one of his first barbs directed at the press, Fleischer complains that during the contested 2000 election, the press was eager to label the Supreme Court's 5-4 decision in Bush's favor to stop counting votes as "bitter" and "divided," but days earlier, when the Florida Supreme Court ruled 4-3 in Gore's favor, reporters shied away from the divisive nature of the decision to the point where "most Americans would have thought it was a unified Florida Supreme Court that put Al Gore on the doorstep of the presidency," according to Fleischer.

But a quick check of LexisNexis database finds Fleischer pontificating based on his own press bias, not actual reporting at the time. The "bitter" and "deeply divided" nature of the Florida Supreme Court ruling was widely reported (emphasis added in all quotes):

Examples like that, which undercut Fleischer's thesis, litter "Taking Heat." For instance, riding a favorite conservative hobby horse, he complains that while reporters routinely label Republicans as "conservatives," they shy away from tagging Democrats as "liberals." "Why have they largely stopped using the word 'liberal'?" Fleischer wonders.

Stop using? Just within the last year, according to Nexis, the New York Times has published 325 articles that contained three or more references to "liberal," followed by the Washington Post (with 283 articles), Los Angeles Times (266), Associated Press (227), Chicago Tribune (165), and USA Today (71).

On the flip side, Fleischer doesn't like the word "progressive": "I don't really know what a 'progressive' is, but I know the Democrats like the word and the press use it, particularly in their coverage of social issues." Compared to the 325 "liberal" articles in the New York Times over the last 12 months, the paper has generated 39 articles that feature "progressive" three or more times. (Not all those articles dealt with politics, and neither did all the "liberal" articles, but the number gives a fair indication of their use.) In his analysis of the press, Fleischer argues "liberal" is underused, while "progressive" is overused, the exact opposite of what's happening.

More trouble ensues when Fleischer complains about how journalists use (or don't use) "social liberal" compared to "social conservative." Fleischer writes, "I don't think I've ever seen the phrase 'social liberal' in the press." Had Fleischer searched Nexis for U.S. media mentions containing the phrase "social liberal" that appeared between 2001 and 2003 -- the time Fleischer served as press secretary -- he would have seen the 725 matches it retrieved.

He then complains that the press routinely adopts Democratic phrases in its reporting. He recalls one White House briefing when he was asked, "If you're not afraid of going after special interests, including those that supported [Bush] like big tobacco, big pharmaceuticals..." Fleischer is annoyed: "Big oil"? "Big tobacco"? Aren't those former Vice President Al Gore's words?" he writes, slapping the press for using the "lexicon of the left."

Of course the phrase "big tobacco" was not popularized by Gore or any other Democrat. It's been in common use for decades. In fact, among the first mentions found by Nexis comes from the Dec. 15, 1977, issue of Forbes magazine, not exactly known as a hotbed of liberal journalism.

On the cusp of the war with Iraq, Fleischer recalls how on March 18, 2003, "someone [inside the West Wing] pointed out how muted the coverage was of Tony Blair's dramatic win in Parliament authorizing the [U.K.] use of force against Iraq. After weeks of coverage about how much trouble Blair was in, his victory didn't get much press."

When not critiquing the press through the language it opts for, Fleischer most often tries to prove his point by playing back exchanges he had during some of his 300 White House press briefings. But Fleischer leaves out important context. For instance, time and again he cites hostile questions posed by Helen Thomas, the grande dame of the White House press corps, as an example of just how agenda-driven liberal reporters can be. (Thomas: "Why does [Bush] want to drop bombs on innocent Iraqis?") The truth is, even though Thomas grabs more mentions in "Taking Heat" than any other journalist, she is irrelevant when it comes to setting the agenda inside the Beltway. She wields no real power and her pointed barbs do not reflect the general mood of the White House press corps. If Fleischer were able to point to a reporter from the New York Times or Washington Post or NBC who asked antagonizing questions on a daily basis, then his charge would stick. But he cannot. Instead he uses Thomas as a convenient foil.

And to take step back, Fleischer, focusing so intently on White House reporters (and their limited role), ignores the Republican media revolution that's going on all around him. It's an insurgency that puts to shame any hint of Democratic partisan activity inside the White House press room. (For Fleischer's purposes Fox News barely exists, garnering just five mentions within "Taking Heat's" 400 pages.) Let's face it, a blatantly partisan conservative host on Fox News or MSNBC, who programs his shows around GOP talking points and treats facts as fungible objects has far more impact on the political dialogue nationwide than a wide-eyed liberal White House news reporter whose editor demands he write balanced, factual stories, but might allow him to ask loaded questions in front of 19 other reporters at White House briefings.

Again, Fleischer pretends the events at the briefings define political journalism. They do not. They're an increasingly irrelevant sideshow. The important, substantative work of covering the administration does not occur during the televised give-and-take inside the White House press room, in part because so little information is ferreted out.

In the end, Fleischer's argument that the Beltway press's reporting is clouded by fundamental bias doesn't withstand scrutiny, and Fleischer himself is proof of that. Arguably the most famous phrase he ever uttered during his years behind the White House podium occurred just weeks after the 9/11 attack. Asked about late night comedian Bill Maher's comments that launching U.S. cruise missiles 2,000 miles away from their target was "cowardly" compared to 9/11 attackers who gave their lives, Fleischer said: "All Americans need to watch what they say, watch what they do." Fleischer insists his comment was taken out of context, and to prove it, he points approvingly to ABC's Ted Koppel, who one night reviewed Fleischer's quote and informed "Nightline" viewers, "Ari Fleischer got a bum rap on that one."

In this case at least, Koppel was able to keep his Democratic "bias" in check.