Must the U.S. government reveal when it has produced "news" broadcasts? In a stunning rebuke of the GAO, the Justice Department says no. 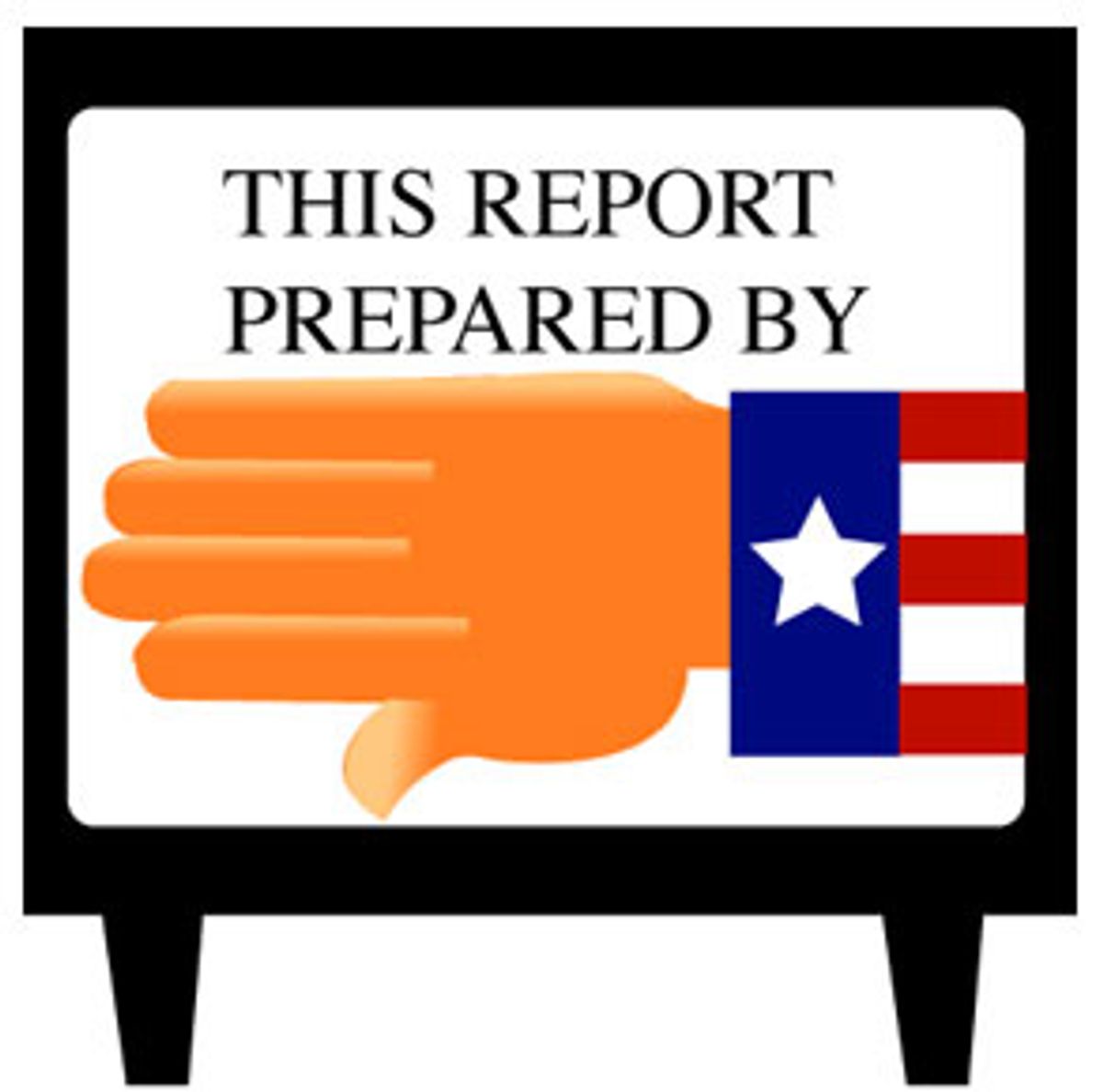 Democrats aren't the only ones angered by the Justice Department's memo to federal agencies on March 11 telling them to ignore a key finding by the Government Accountability Office. The GAO has declared that video news releases -- or prepackaged TV segments -- that fail to reveal they were produced by the government constitute illegal propaganda. "It's highly unusual for the Justice Department to take this action. Sending out a memo may be unprecedented," says David Walker, comptroller general of the United States and head of the GAO. He adds, "The Justice Department is not independent on this matter."

Department spokesman Kevin Madden could not say how common the issuance of a memo was, but noted that because GAO findings are nonbinding, the Justice Department's Office of Legal Counsel has final say over executive branch legal matters.

"We strongly disagree [with] and are very disappointed by the administration's actions," Walker says. "This is not just about what's arguably legal; it's about what's right. Taxpayers have the right to know if and when the government is trying to influence them with their own dollars."

Others were also caught off guard by the administration's move to block the ruling. "I was surprised the Justice Department double-backed on the GAO," says Laurence Moskowitz, chairman and CEO of Medialink, a multimedia communications firm that annually distributes nearly 1,000 video releases produced by commercial, nonprofit and government clients.

Last year, following the GAO's ruling that news segments produced or distributed on behalf of the government should spell out their origin to viewers, Moskowitz wrote in PRWeek, "The GAO actually bestowed a great service to the PR industry by codifying simple guidelines for government disclosure and reinforcing the need for simple honesty."

And despite the Justice Department memo, Moskowitz says, "we advise government clients to function under the current GAO rules, which include script identification. It's prudent."

The controversy arose after the airing of a pro-Medicare-reform video news release created by the Centers for Medicare and Medicaid Services, an agency that is part of the Department of Health and Human Service. Seamlessly produced to look like a news report for local television stations, the agency's video release was perhaps too realistic. When it aired in its entirety in nearly 40 local television markets between Jan. 22 and Feb. 12, 2004, viewers were never told the 90-second package had been created by the government. Adding to the confusion was the use of a hired narrator, who ended the spot with the sign-off: "In Washington, I'm Karen Ryan reporting."

Critics labeled the segment propaganda, saying its release went far beyond the usual goal of distributing information electronically, crossing the line into government-manufactured news. Revelations earlier this year that the administration had given lucrative contracts to at least three conservative columnists (who in turn championed White House policies) had already generated criticism that the administration was circumventing genuine media outlets to get its message out.

"Deceiving the American people about government policies and proposals is not the American way," Sen. Ted Kennedy, D-Mass., and Frank Lautenberg, D-N.J., wrote to President Bush after those revelations. "Propaganda should not be coming out of the White House."

Democrats subsequently asked the GAO to investigate. Last May the agency, which serves as the investigatory arm of Congress, concluded that video news releases that don't include as part of their on-air script a clear disclosure that they were produced by the government (for example, "John Jones, reporting for the Department of Education") constitute propaganda and thus an illegal use of taxpayer dollars under the Consolidated Appropriations Resolution of 2003.

On March 11, the Justice Department informed agencies they could ignore that finding, advising them that the prohibition on propaganda "does not apply where there is no advocacy of a particular viewpoint, and therefore it does not apply to the legitimate provision of information concerning the programs administered by an agency."

On Monday, White House spokesman Scott McClellan, when asked about the controversy over government video news releases, stressed the "importance of making sure that it is factual information and not crossing the line into advocacy."

Both of the administration's standards -- that news releases be accurate and that they avoid advocating just one position -- fall well short of industry norms. The Public Relations Society of America, for example, offers these instructions regarding video news releases:

"1. Organizations that produce VNRs should clearly identify the VNR as such and fully disclose who produced and paid for it at the time the VNR is provided to TV stations.

"2. Organizations that prepare VNRs should not use the word 'reporting' if the narrator is not a reporter.

"3. Use of VNRs or footage provided by sources other than the station or network should be identified as to source by the media outlet when it is aired."

The now-famous Karen Ryan news release violated two of those three guidelines -- by using the word "reporting" and by not identifying the source of the segment when it was aired in 40 markets.

In regard to that release, administration officials argue that the report could easily have been edited by local producers, who, for instance, could have stripped out Ryan's audio, including the "reporting" tag, and inserted their own voice-over. If there was any confusion about the report, they say, it was the fault of the producers, who were told the newslike segment was made by the government. "TV producers who receive our material are clearly aware where it comes from," says Bill Pierce, a spokesman for the Department of Health and Human Services. "To hold us accountable for ethical news judgment is a bit difficult to understand," he says.

Bud Veazey, assistant news director at WAGA in Atlanta, which last year inadvertently ran two Ryan news releases in their entirety, concedes the media "bears some responsibility." In the cases in which the Ryan release aired unedited, station executives say it was mostly because of an inexperienced or hurried producer who was scrambling to fill airtime and who did not realize the satellite-fed release was in fact government produced. But Veazey agrees with the GAO that to avoid any further confusion video releases should be more clearly marked. "I want them identified in the script. I understand why people don't want to do it, because stations would be reluctant to air it directly off the satellite. But you need honest disclosure."

In its 2004 ruling, the GAO took issue with the notion that if the government makes journalists aware that it is the source of information, then the government cannot be accused of illegally distributing propaganda. The GAO noted, "In our case law, findings of propaganda are predicated upon the fact that the target audience could not ascertain the information source." Referring to a case involving the Small Business Administration in the 1980s, it said, "For example, we found government-prepared editorials to be covert propaganda; although the newspapers who would have printed the suggested editorials should have been aware of the source, the reading public would not have been aware of the source." The SBA had created editorials to run on Op-Ed pages across the country in support of President Reagan's proposal to transfer the SBA to the Department of Commerce. While newspaper editors may have been aware of the origin of the essays, the readers -- the target audience -- were not. Therefore, the GAO ruled, the SBA-prepared editorials violated the ban on propaganda.

The GAO found the same to be true of Ryan's video news releases: "The story packages, similar to the SBA editorials, could be reproduced with no alteration, thereby allowing the targeted audience to believe that the information came from a nongovernment source or neutral party."

Pierce at HHS declined to say whether future agency video news releases would include identification in the scripts, but insisted, "We've always been above board."

But Walker at the GAO remains miffed. "I don't understand why somebody would not try to comply with the guidance. Things like ethics should matter. Our job as public servants is to do what's right with the taxpayers' money."