Attack of the celebrity blogs

From Rosie's ramblings to Melanie Griffith's cringe-inducing memos to herself, the rich and famous are increasingly exposing themselves online. Why? 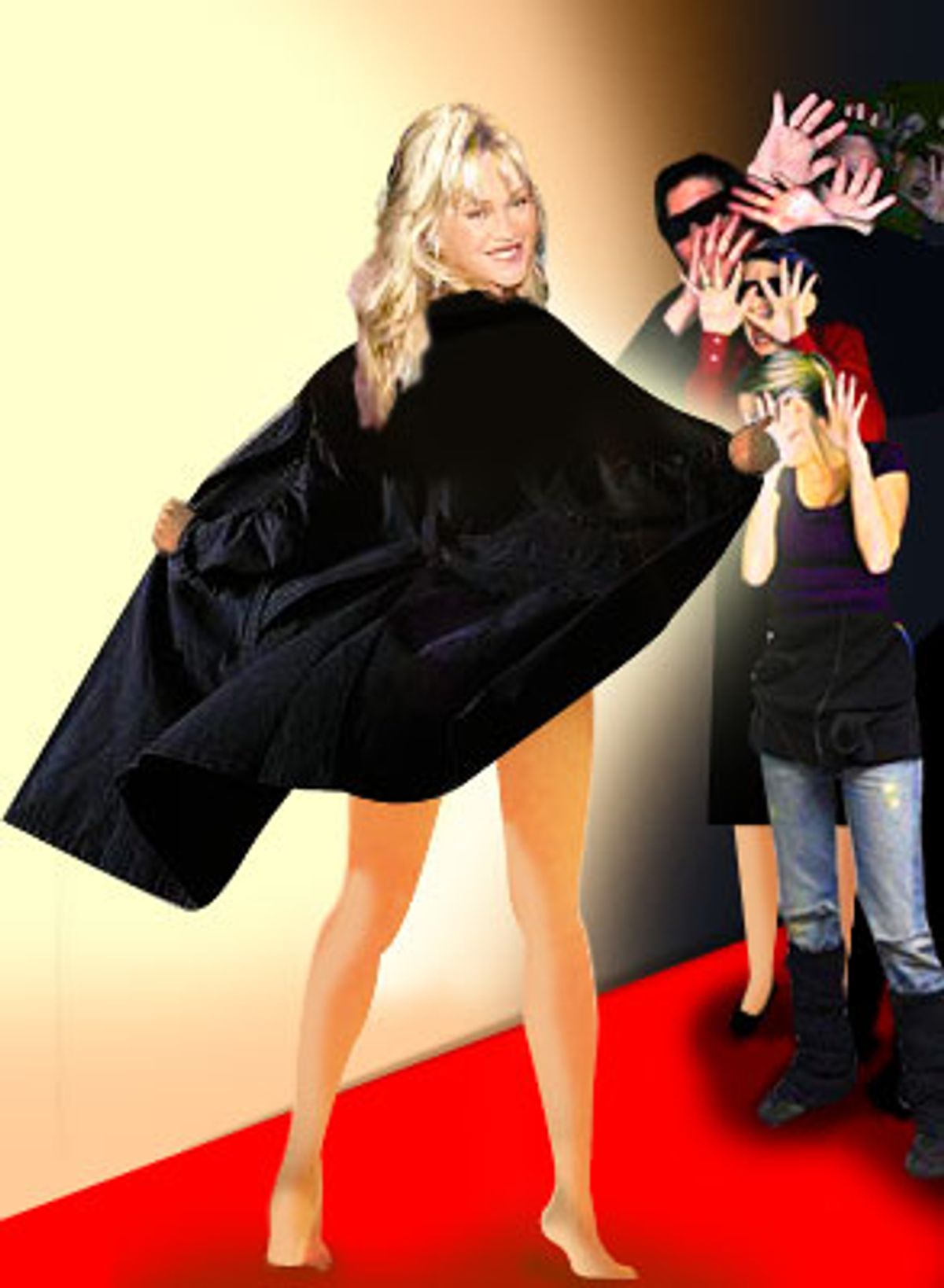 There's a theory that no one keeps a diary unless he or she wants it to be read, which is as good an explanation as any for the popularity of blogging. For the people who write them, blogs are a means of self-expression first and foremost, but they also reinforce an individual's sense of being part of a community. Even more important, they're a rudimentary form of validation: I'm being read, therefore I am.

All that goes for civilian bloggers, regular, average types who would be invisible and unknown to us if we didn't read their blogs. But it doesn't begin to explain why Melanie Griffith, minor celebrity and, let's not forget, at one time an incredibly charming actress, would feel compelled to share her tips on connecting with her inner self, complete with a form letter that goes

If it is your will, please reveal to me in a dream tonight the secret of my success in order to become closer to you.

With love and respect,

Celebrities are different from you and me, and their blogs are different, too, if only because they open additional windows onto people we already assume we know. You many not have wanted to know that Griffith writes letters to her inner self. (I wonder if she uses the good stationery?) But of all the things Griffith might choose to reveal about herself -- from plastic-surgery denials to affirmations about the strength of her marriage to Antonio Banderas -- what kind of balls does it take to post something as ridiculous and as embarrassingly intimate as a form letter to one's psyche? For those who have become tired of celebrity overload (although the ever-increasing glut of big-pictures-no-text celebrity-poop magazines suggests that there might not be many who are), celebrity blogs are a welcome antidote -- they put us, the consumer, in the driver's seat. No one is flashing melaniegriffith.com in our face; if we find ourselves going there, it's our own damn fault.

In an era when celebrities already carry so much currency, and get so much ink and so many TV pixels, why should they want to bother to communicate with us directly? Sometimes celebrity blogs, updated lackadaisically if ever, feel like nothing so much as a publicity stunt. (Stefani's blog is filled with boring stuff along the lines of "Thanks for coming out to our tsunami benefit" -- falsely noble and eminently unreadable. A Stefani fashion blog would be much more fun, and more honest.) Some celebrities, like KISS's (Gene Simmons,) are at least forthright about their intentions: "Appeared on CNN ShowBiz today with FABIO to shill for my MR. ROMANCE television series," he writes with joyous crassness in his entry for March 15.

But even though just about every celebrity blog is, to at least some extent, a publicity tool, some throw off surprising sparks of creativity and originality. Is it possible that, just as people who hold down dreary jobs by day blog passionately about movies, knitting or fish keeping by night, some celebrities feel that even their seemingly exciting, creative jobs don't use every muscle they've got? Jeff Bridges' blog is filled with wryly amusing John Lennon-style line drawings and scans of handwritten notes (as well as, of course, plugs for Bridges' movies and appeals made on behalf of his favorite charities). And Ian McKellen, in the Grey Book, an online journal of his experience making and promoting the "Lord of the Rings" movies (it spans 1999 to 2001), proves himself an exceedingly charming and entertaining writer. The Grey Book feels like a precursor to a celebrity memoir that any of us might actually want to read. In a digression from his "LOTR" musings, circa December 2001, McKellen grouses good-naturedly about doing Strindberg's "Dance of Death" at the Broadhurst Theater on Broadway with Helen Mirren and having to cross West 44th Street at the end of the evening: Parking isn't allowed on the north side of the street, where the Broadhurst is located, but it is allowed on the south side, outside the St. James Theater, where Nathan Lane and Matthew Broderick were, at the time, starring in "The Producers." Thus, Lane and Broderick had it cushy, but McKellen's driver would have to wait on the St. James side, and McKellen would have to dodge post-theater traffic to get to him. "But then," McKellen writes, "on really crowded nights when the tourist theatre district is belying the image of a New York City still in recovery, there's often a friendly young cop who guides me over as if I were the President." Anyone who can write that crisply and elegantly about crossing the street ought to be writing a memoir.

While I'm only a moderately enthusiastic Moby fan, I'm delighted to report that his blog is a model of good grammar, spelling and punctuation (by blog standards, at least) and is marked by a casual, friendly tone (despite Moby's notorious stridence about some of his favorite causes). He portrays the glamorous life of a musician in a way that's stripped of artifice -- and that may be the artifice right there, but no matter: "in other news, my days are now spent in hotel rooms and tv studios and airplanes. which is ok. the biggest negative is that i can't remember the last time that my lungs were filled with non-recycled air. today, for example, i woke up in a hotel room, did interviews in a hotel room, got into a car, drove to the airport, got on an airplane, drove to another hotel, checked in, and now here i sit, in another hotel room." The grandfather may have said it better in "A Hard Day's Night" -- "I was supposed to be getting a change of scenery, and so far I've been in a train and a room, a car and a room and a room and a room" -- but the essence of the musician-on-tour experience (and, presumably, its isolation) isn't lost on Moby.

Rosie O'Donnell's blog, formerlyrosie, is somewhat harder to comprehend. O'Donnell -- who, if her blog is any indication, is still reeling emotionally from the legal battle she fought with Gruner & Jahr, the publisher of her defunct magazine, Rosie -- is, to have her tell it, strident in her views. Also, as an openly gay woman and mom, she offends many people, as we're reminded repeatedly. O'Donnell is outspoken about her political beliefs (she has plenty to say about Bush, the Iraq war and the prevalent knuckleheadedness on gay marriage). And while she probably does infuriate many people, she walks a strangely fine line between wanting to piss people off and wanting to be loved. In an entry titled "fat celebs," O'Donnell blasted Kirstie Alley for telling Matt Lauer that she was 201 pounds at her heaviest. Apparently, O'Donnell believed Alley was underestimating. She wrote: "I almost choked on my yodel/ I am 220/ fess up kirstie - 201 my ass."

In her entry for March 17, O'Donnell notes that she received a phone call from Alley, who was stung by the remark. O'Donnell apologized halfheartedly and defended herself by claiming she was making a joke at her own expense. O'Donnell speaks first and thinks later, a luxury most civilian bloggers enjoy, but for a celebrity, the stakes are higher. And although O'Donnell claims to be widely reviled, her blog seems to spring straight from the heartwarming, scrapbooky Middle American values that so many on the left, rightly or wrongly, cringe from. Motherhood is extremely important to O'Donnell: She notes with beaming approval that her shrink takes calls from her two teenage kids even when she's in the middle of a session. (Personally, having my shrink take personal calls on my dime would be enough to turn me into an angry lesbian, but maybe that's just me.) And while O'Donnell clearly does her share of charity work, she isn't particularly skillful when it comes to explaining what that work means. In one entry, she describes a trip to Somerville, Mass., to help raise money for beleaguered public schools. But her flowery musings -- rendered in a kind of faux freeform verse -- make for wincingly painful reading: "we live in dangerous times/ when our childrens childrens/ will ask us/'what was it like then - when democracy almost died?'"

If you're the type of person who often asks yourself, "Mommy, why do people fight wars instead of just giving each other big hugs?" formerlyrosie may be just the celebrity blog for you. For the rest of us, there's WIL WHEATON dot NET, in which Wheaton, who is in his early 30s, writes freely about many subjects, including his home life (he's happily married, with two stepkids), his pets (two of his cats have recently suffered from serious illness) and, most movingly, I think, about his career. Wheaton got the idea for WIL WHEATON dot NET after a Hooters waitress did a double-take and asked him if he "used to be" an actor. Horrified and dispirited, Wheaton started his own Web site to let the world know he was still alive and still working. The site evolved into a blog with a large, devoted following.

Wheaton's style is relaxed and convivial and often enjoyably silly. (On his FAQs page, a reader asks, "Is it true that you were really Ashley Judd's first onscreen kiss, and you ruined her for the rest of her life?" to which he replies, "Yep. It is 100% true. Ashley Judd played Robin Lefler, in the ["Star Trek: The Next Generation"] episode 'The Game', and Uncle Willie went to bootytown.") But Wheaton's goofy charisma isn't nearly as interesting as his take on what it's like to be a professional actor who -- the popularity of his blog notwithstanding -- isn't exactly a celebrity. Wheaton recently landed a small part as a drug-addled crazy person in an episode of "CSI," which may not be that exciting to big-time celeb watchers, but which can mean the world to an actor who's trying to make a living. In a recent blog entry, Wheaton writes of sitting down to watch that "CSI" episode with his family: "Around 8:57 last night, I had a brief flash of panic: What if they cut my part down? I'm going to feel like the biggest jackass in history!"

Wheaton's part wasn't cut down, and he spends the rest of the entry describing how he "felt his face flush" when he saw his name on the screen, and how certain things he'd tried to convey about the character had, to his relief and pleasure, actually come through on-screen: "I thought I looked a little chubby in my face (thank you, Stone Brewing company) but the real volatility that I was hoping for was definitely there." After Wheaton's character was led off to the police car, one of his stepsons said, "Man, that was scary!" The other said, "It was cool, though."

The overarching point of that entry may be that celebrities aren't like you and me, except when they are. WIL WHEATON dot NET is appealing because it's written by a regular person with intelligence and a sense of humor. When he's lucky enough to do the work he obviously loves, he also has a pretty interesting job. But while his readers leave lots of comments congratulating him on his "CSI" performance, there are plenty more who are eager to offer advice about the sick cats. In the end, that's what writing -- and reading -- blogs comes down to. The Inner Self isn't the stuff of everyday life: The cats with the kidney problems are.