"Windows on the World" by Frederic Beigbeder

For a Frenchman, Sept. 11 spawns an epic bout of self-laceration, reflections on fatherhood, and a moment-by-moment imagining of what it's like to spend the end of your life at the top of a skyscraper. 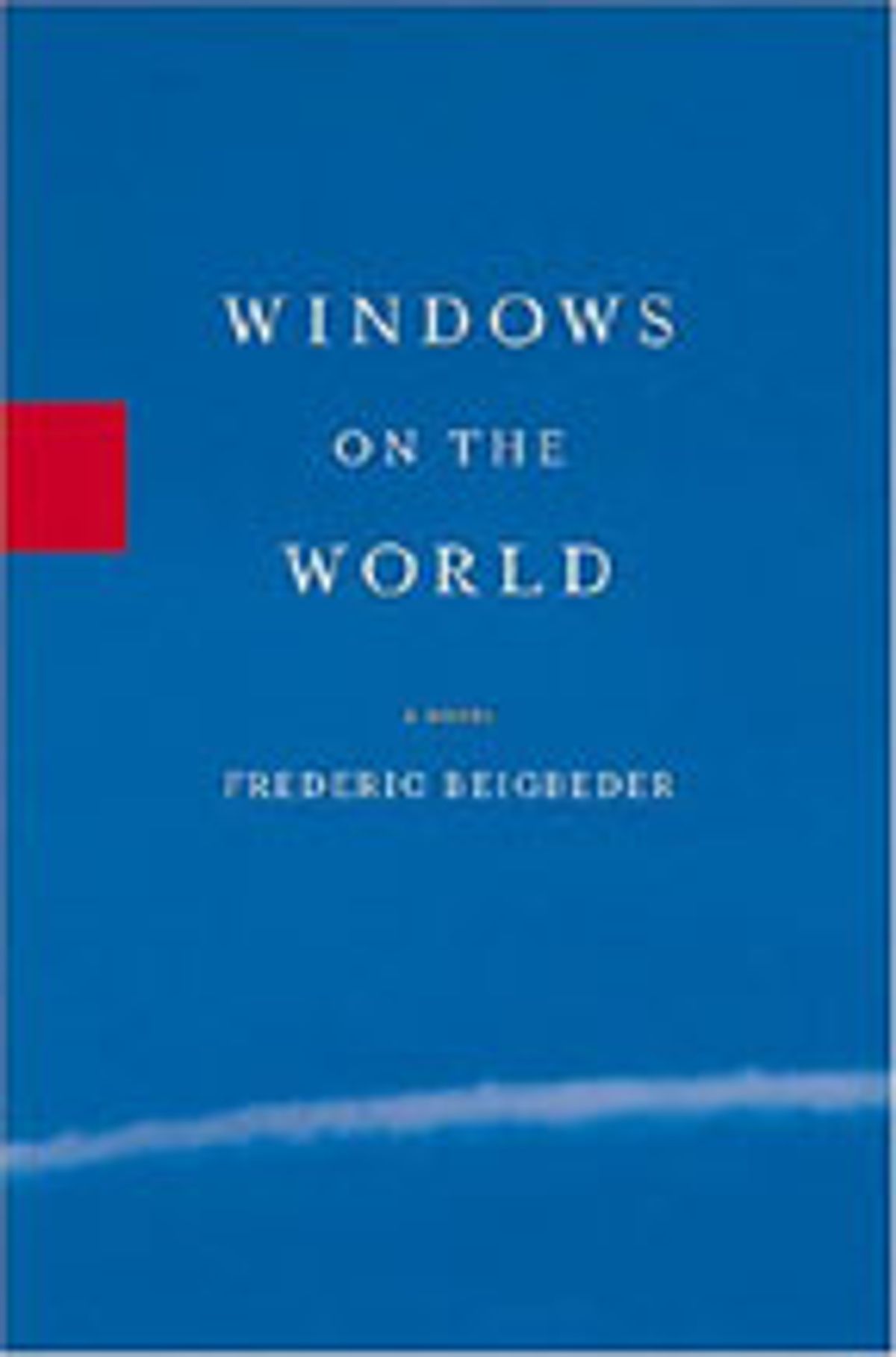 Exhibit A, demonstrating that literary fiction takes a while to digest current events: Frederic Beigbeder's "Windows on the World" is the first novel to perfectly capture the bizarre collection of emotional modes we juggled in 2002, just after the first shock of Sept. 11 was beginning to wear off. The book staggers from full-fledged storytelling to barely veiled memoir to essay to random, canny observation. It's a discombobulated, contradictory work, but it rings true in a way that other stabs at the same topic haven't.

Beigbeder is a French writer, TV literary critic (they have jobs like that in France) and former publisher. (You can detect the influence of one of his authors, Michel Houellebecq, in "Windows on the World.") He likes -- no, make that "loves," with qualifications -- America and believes that "American art is constantly renewing itself, because it is profoundly rooted in real life." Yet he also sees the Sept. 11 attacks as a moment of reckoning for the kind of person he's become as a result of believing in America's dreams. The fall of the twin towers is, in this light, "the collapse of a house of credit cards," and "Windows on the World" is an itemization of the bill that's finally come due.

The novel is composed of short chapters, each assigned to one of the 105 minutes between the time when the fictional Carthew Yorston and his two young sons enter the Windows on the World restaurant at the top of the North Tower to the moment when the building collapses. The chapters alternate between Carthew's account of that morning and the ruminations of Frederic Beigbeder, a seemingly very lightly fictionalized version of the author himself. Frederic spends his mornings brooding about the Sept. 11 novel he's writing over breakfast in the restaurant at the top of the Tour Montparnasse in Paris. He's full of shrewd thoughts on the cultural divide, from the trivial -- "What is it with Americans and salmon? That's all they eat" -- to the substantial -- "Deep down, the rest of the world admires American art and resents the United States for not returning the favor." It turns out he's a descendant of John Adams, via his American grandmother, and Carthew (it's a family name) is his imaginary cousin and an alter ego of sorts.

Like Frederic, Carthew has bailed out on his family. He's left his wife and kids in Texas, where he grew up, for Long Island, where he's made a small fortune in real estate. He's taken up with a lingerie model named Candace, who despite being the sex machine of his fantasies, has begun to seriously harsh his buzz by talking about marriage, kids and living together, "precisely the three mistakes that I want to avoid making again." Frederic has a 3-year-old daughter, who makes a brief appearance in the novel, an unnamed ex-wife and an equally shadowy fiancée who leaves him at 9:18, prompting a trip to New York, where he embarks on a bender of flavored vodka and strip clubs.

We already know what's in store for Carthew, so the question is, will the ordeal of imagining in vivid detail what it's like to die horribly alongside the two children you have failed to decently father have any meaningful effect on the feckless Frederic? Or, to pull back for a long shot, what did the tragedy really mean for those of us left behind? The novel oscillates between the poles of two questions Carthew poses in extremis: "How can people do this to other people?" and "How did I get to be such a bastard?" For Frederic, the attack spawns an epic bout of lacerating self-examination. You can't fail to be impressed with how brutally and expertly he goes about dismantling his own personality.

This culminates in a list he calls "Je m'accuse," a 40-item dissection of his venality and cowardice. High spots include "I accuse myself of loving all that I disparage, especially money and fame"; "I accuse myself of blaming others because I am jealous of them"; and even "I accuse myself of trying to please even in this self-accusation intended to parry the blows to come." A paean to Hugh Hefner wends its way to an acknowledgement that the playboy ideal "inexorably absorbed by every man" born since the 1960s has devolved into a lonely, kitschy figure who "loves no one, especially not himself, because he refuses to suffer and does not want to risk losing face." What Hef's former acolytes are left with is another scary question: "What use is love in a civilization based on desire?"

The roots of Sept. 11 lie as much in panicked masculinity as they do in religion, and so it's no surprise that the attacks should provoke anguished reconsideration of what it means to be a father -- or a son. And in the West, of course, this leads to a reconsideration of the relative values of freedom and happiness. Though he has much less time to come to a resolution, Carthew, perhaps unsurprisingly, gets a lot closer to finding an answer.