The story of a middle-aged man seeking his moral compass in the post-9/11 world, isn't about fear or dread but the attainment of joy. 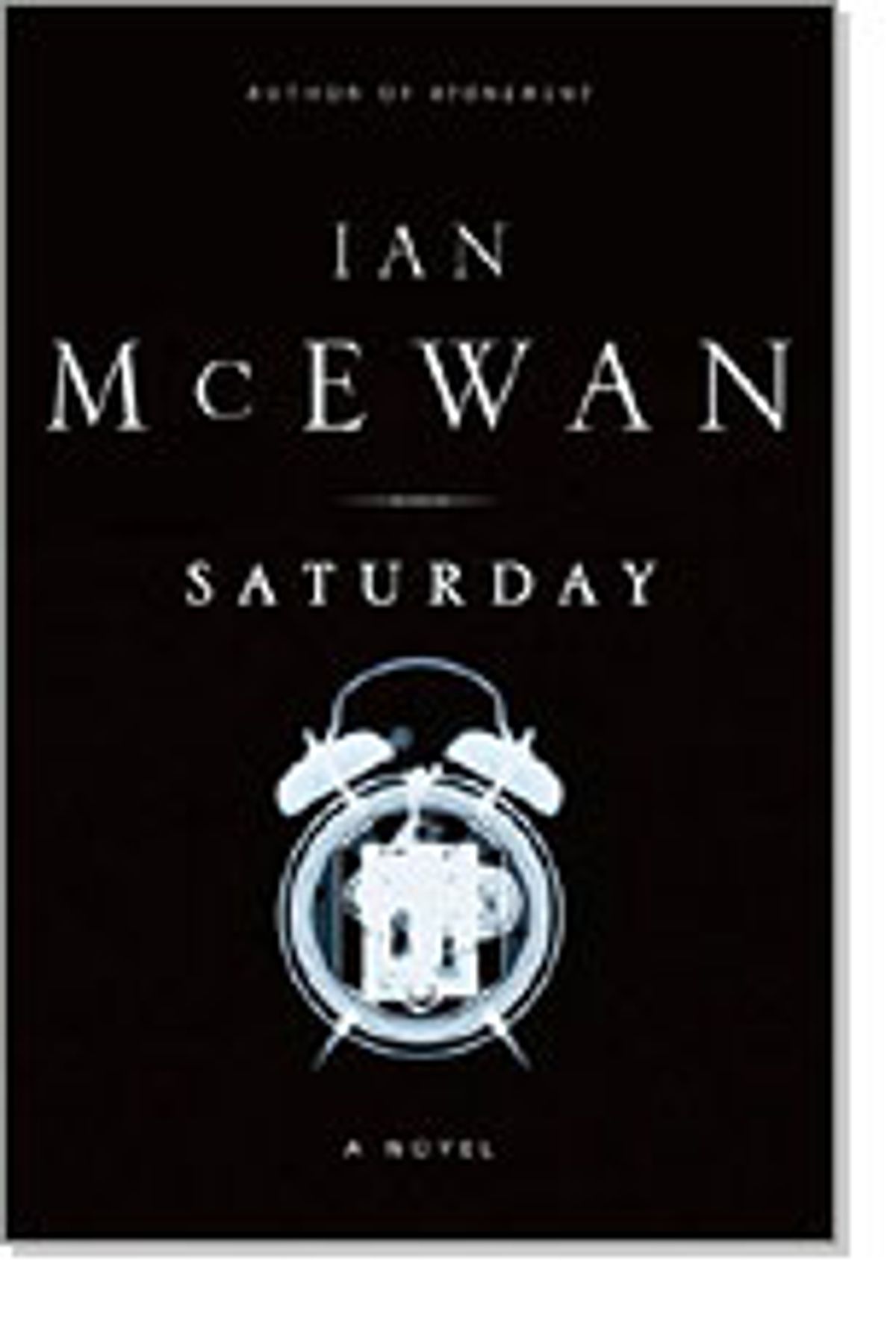 Early in Ian McEwan's new novel, "Saturday," Henry Perowne, a London neurosurgeon, "an habitual observer of his own moods," finds himself musing about his "sustained, distorting euphoria." Any reader familiar with McEwan's work wants to jump in at this point and warn Henry that euphoria is going to be short-lived.

Sure enough, Henry's long, good Saturday doesn't last through dusk. Set shortly before the U.S. invasion of Iraq, talk of politics, war and terrorism pervades Henry's life; you can almost hear the buzz of the antiwar demonstrators in the streets outside his apartment. A thick atmosphere of uncertainty hangs over Henry and his energetic, contented family, but in the end "Saturday" isn't about fear or dread but about the attainment of joy.

McEwan's stature has now reached a level where the problem with reviewing each new novel is in constantly having to reevaluate his oeuvre and compare the most recent work to earlier ones. The most convenient way to identify the themes of "Saturday" is to call them the inverse of those from "Atonement," his most popular and, if I read the reaction from my friends correctly, most resonant work. "Atonement" is about a tragedy and how it shapes the lives of three characters through the Second World War and beyond; "Saturday" is about a few hours in the life of a man at the midpoint of his life seeking his moral compass as the violence of the outside world closes in on him.

Created by a lesser novelist, Henry would be the author's alter ego, or worse, an alienated everyman. Henry is neither an everyman nor alienated but a dedicated student and healer of the brain somewhat lacking in the understanding of the mysteries of the mind, particularly that of imagination. His son Theo is a blues musician, which leaves Henry vaguely troubled because "there's nothing in his own life that contains this inventiveness, this style of being free." His daughter Daisy is a newly published poet (her verse is actually the work of English poet Craig Raine) who keeps feeding him the classics to read, in spite of which he's not sure he's ever experienced literary genius "first hand, despite various attempts. He even half doubts its existence." Her notion "that people can't 'live' without stories is simply not true. He is living proof." Henry, like many a scientific man, doesn't want the world "reinvented; he wants it explained."

Decent, compassionate, liberal-minded, he cannot resolve his own feelings about the imminent war. When arguing with an American colleague, "he's a dove," but he's "a hawk with his daughter." Their arguments have the sour, unwinnable tone that those who have tried to keep an open mind about Bush's policy in Iraq have surely experienced among their own family and friends -- he and Daisy "are fighting over armies they will never see, about which they know almost nothing." Arguments over such things come easy: "When there are not consequences, being wrong is simply an interesting diversion."

Then, without warning, on Saturday afternoon, while trying to speed past streets crowded with peace demonstrators -- McEwan is so confident of his powers as a storyteller that he doesn't shrink from a little obvious symbolism -- Henry gets into a fender bender that will lead to consequences that pursue him to his home. A horror is averted in large part when an inarticulate, brain-diseased street thug finds himself enthralled by precisely the kind of literary genius that Henry is immune to -- surely the most ingenious punch line in recent fiction.

"Saturday" showcases McEwan's almost effortless gift for weaving contrapuntal themes into a narrative -- the relationship between rationality and creativity, the survival of happiness in the wake of incalculable violence, the necessity for fiction in a world of fact. All shadow the story without intrusion. ("Rhetoric is heard," said Yeats. "Poetry is overheard.")

The unfortunate legacy of postmodern culture is that novelists are practically required to keep an ironic distance from connections with the real world. "Serious" literature must now put quotes around the serious; it's practically an article of faith that fiction be judged on its formal ingenuity. There is no secret as to why Ian McEwan has gained such a large, intelligent and devoted readership. In book after book, and now, especially in "Saturday," he has gone directly against the grain of fashionable contemporary cynicism and proved that a novel can be topical without being either obvious or dogmatic, that a writer can derive aesthetic sense from confronting the world's concerns.

Next: A precocious child who dresses in white, a mute grandfather, and pages of pictures of doorknobs all come together to make a surprisingly consoling novel