Instead of accepting Greenspan's false argument that deficits will undermine Social Security, Democrats should actually call for more federal borrowing -- and spend the money on rebuilding America. 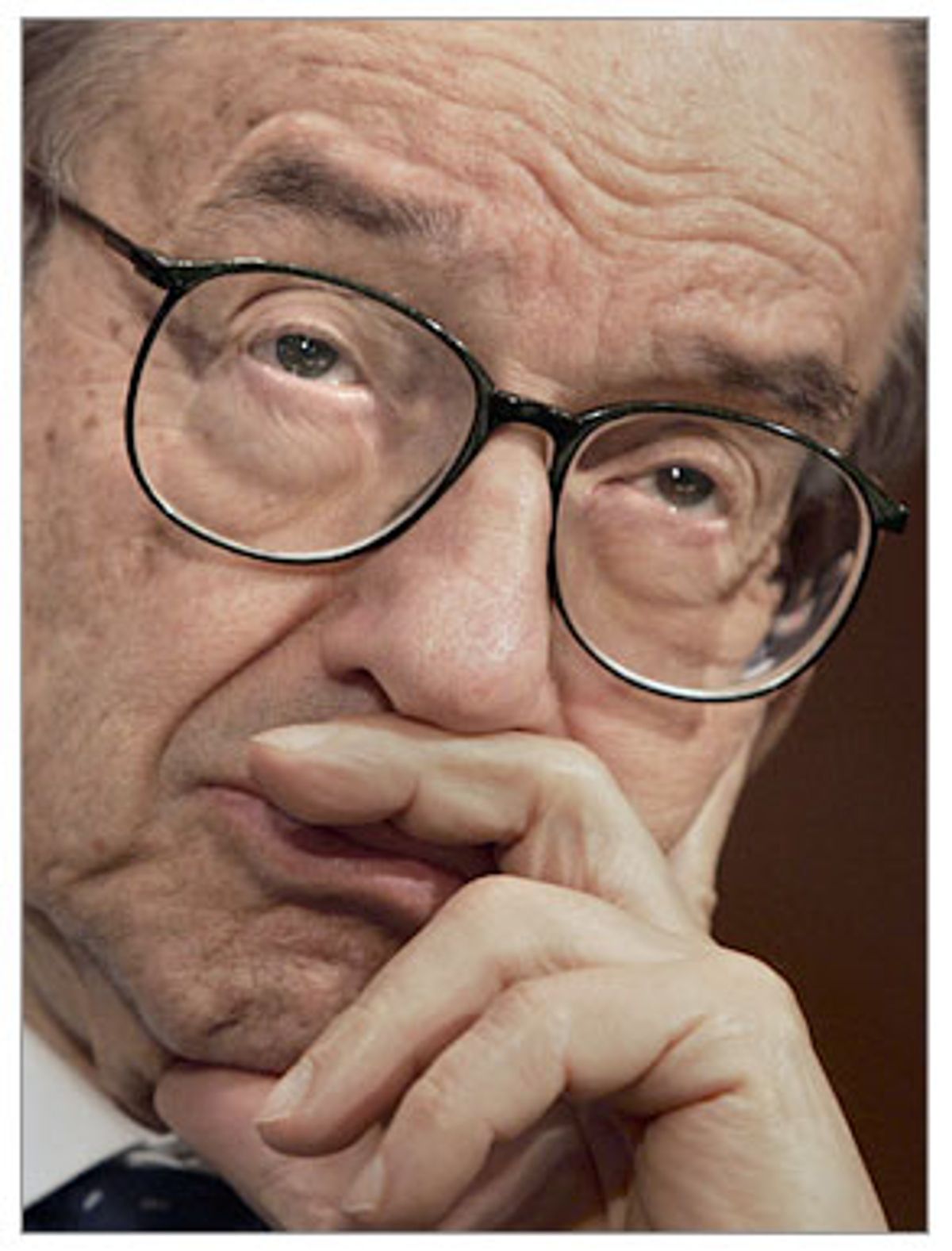 In Reuters we read of Alan Greenspan's March 15 testimony to the Senate Special Committee on Aging, wherein he made a comment both true and outrageous, about his support for tax cuts back in 2001:

"Greenspan said most leading economists at the time had expected large surpluses to stretch into the future ... 'I don't think that the issue is a question of taking a wholly different view ... It turns out we were all wrong [about the surplus forecasts],' Greenspan said, but added he would take the same position again faced with similar circumstances."

Yes, most economists agreed that the surpluses of the 1990s would continue. But not all. Six years ago, in the Wall Street Journal, Paul Davidson and I warned, correctly, that the surpluses could not be sustained, that an effort to do so would produce recession. We wrote:

"This plan assumes that full employment will be maintained independent of federal spending, which will be strictly restricted in order to create surpluses. This assumption is foolhardy, for tight budgets depress economic growth and raise unemployment. Japan's recent experience illustrates the point: Strong economic growth plus a tight budget strategy produced a budget surplus by 1990 that then led to a decade of stagnation and recession ... The depressing effect of tight budgets means that the promised surpluses will probably never materialize."

But as we said back then, Democrats were to blame, no less than Greenspan, for fostering the contrary illusion. Their plan to retire the federal debt in 15 years was the brainchild of two former treasury secretaries, Robert Rubin and Larry Summers (where is he now?), and it carried the endorsement of President Clinton. As we wrote at the time, the plan wasn't responsible; it was "foolhardy."

"But don't we need the surplus to save Social Security? No. The policy of 'saving the surplus' contributes nothing to the future of Social Security. It is impossible for 'savings' today to 'pay' for pensions 20 years from now. Proposals to 'fund' Social Security misunderstand the basic fact that putting 'funds' into the 'trust fund' is redundant. Congress, not the trust fund, controls benefit levels paid under Social Security. The promises to pay are already written into law. The special government bonds that the trust fund holds and that Mr. Clinton would have the projected surpluses add to are mere symbols of that legal commitment. So long as Congress leaves the law intact, benefits will be paid whether or not a bond is held in the trust fund to be redeemed when future benefit payments are met."

That is Greenspan's argument. In sounding his warning at Tuesday's meeting, Greenspan said that rising Social Security benefits, alongside Medicaid and Medicare, add to deficits that threaten to bring on an economic stagnation that will, at some future date, make our federal budget "unsustainable" and our current commitments to the elderly "unaffordable."

But just how is it that pensions for the elderly and payments to doctors and nurses hurt the economy? To begin with, such payments are the economy. It is nonsense to suppose that Social Security benefits per se can reduce the total output of goods and services. Purchases of medical care add directly to GDP, as do expenditures of the incomes provided to seniors. If you did too much of this (realizing full employment prosperity along the way) you might eventually have an inflation problem. But that is not Greenspan's complaint.

Greenspan's argument, closely paralleling that of many Democrats, is that budget deficits themselves cause a drag on growth. This drag theoretically offsets the direct, positive effect of the benefits themselves.

Now, there are broadly two interest rates. The short-term interest rate, as it happens, is what Greenspan controls. Yes, he has been pushing it up. But if he chose to stop, that interest rate would not rise anymore. Isn't that obvious?

What about long-term interest rates, which are supposed to reflect the influence of future budget deficits -- inflation expected in 10 or 20 years when the baby boomers retire? They haven't risen at all. They are lower now than they were in 2001, even before Bush's tax cuts. If there is evidence for the idea that projected budget deficits threaten economic stagnation, the supposedly all-knowing financial markets are unaware of it.

So either Greenspan is wrong, or the financial markets are dumb. Either way, we're not in the trouble Greenspan supposes.

In the real world, deficits in the past four years were inevitable, as Davidson and I predicted back in 1999. So far as we know now -- based on the behavior of the markets -- deficits projected for the future are a problem only because they place a political barrier, fortified by an enormous amount of economic mumbo jumbo, in the way of public investment that we desperately need and of the preservation of Social Security, Medicare and Medicaid.

Moreover, in the near term, there is no way to fix the budget deficit. Cuts in Social Security and Medicare would only depress the economy (doctors and nurses would be laid off; hospitals and nursing homes would close), re-creating the budget deficit as tax revenues fell. Immediate tax increases would have the same effect, while raising taxes sometime off in the future -- while not a bad thing -- would be a cosmetic gesture. Would such a measure lower long-term interest rates? No, it would not -- they're already very low.

In short, to put deficits at the center of the economic universe is futile and defeatist. It is to concede that the government of the richest country in the world can afford to do nothing. That's an absurd position. And it's political suicide, to boot. It has rendered the Democrats impotent and useless, as voters long ago started to notice.

Greenspan did say one thing that was smart and sensible to the Senate committee Tuesday: "The bottom line in the success of all retirement programs is the availability of real resources at retirement."

This is precisely why private accounts, which Greenspan favors, make no sense. Such measures would only rearrange claims on future resources -- leaving a lot of losers. But they would do nothing whatever to increase the real resources available 20 or 30 years from now. Hence they would do nothing to encourage the appropriate productive capacity to meet the needs of tomorrow's old.

What should the government do, with the present blessing of low long-term interest rates? Obviously, it should borrow! But for a purpose, please -- not merely to keep 150,000 soldiers on a mission impossible in Iraq. It should borrow to repair and rebuild our cities, our transport, our schools, our environment -- either directly or through state and local government. That's the only way the country as a whole can become materially richer, a generation from now, than it would otherwise be.

And it's the only way the Democrats can succeed. Why on earth should voters be attracted to a party whose only program is raising taxes, for the sake of a sterile "fiscal responsibility" whose only plausible objective -- low interest rates -- already exists? If long-term interest rates do start to rise, then, yes, taxes should be raised and spending plans reconsidered.

But why be paralyzed in advance? Democrats might learn a lesson from Bush: Lay out a vision and go for it.

If we run our economy competently, we will all be much richer, 30 years from now, than we are today. And we will then be able to care for our aged -- today's working people -- however numerous they may be. At that time, an intact Social Security program -- which as a matter of law simply gives each member of the future elderly the right to a life of modest comfort -- will be vital.

Meanwhile, benefit cuts are as unnecessary as they are cruel. Some Democrats have been a bit too eager to help dig the grave of fiscal paranoia in which Bush and Greenspan would like Social Security to be buried.