Abandoning principle and reason, DeLay, Bush and their ilk are trafficking in cheap emotions -- and debasing our civic ideals. 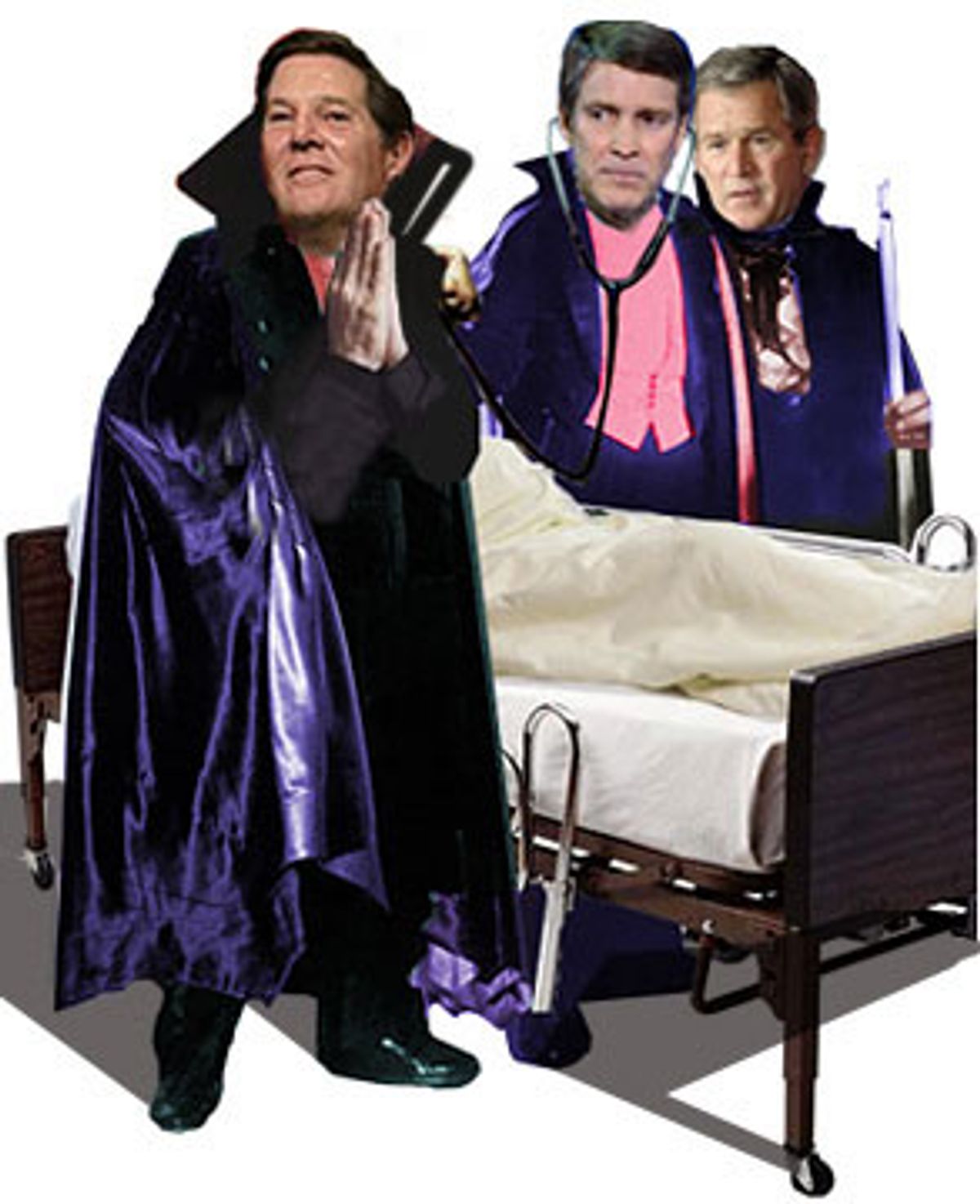 House Majority Leader Tom DeLay, one feels safe in assuming, is no reader of classic texts in moral philosophy. But in rushing through legislation that would allow a federal judge to intervene in the case of Terri Schiavo, he took sides in one of the most widely debated controversies in the history of ideas.

In making moral decisions, we can be guided by two different sets of considerations, those of empathy and those of principle. Should we respond to the particulars of a situation that cries out for our sympathies? Or are we obligated to put emotions aside and shape our conduct by universal norms meant to apply to all situations? An era dominated by mass media imagery will nearly always decide for the particular. I know of no one watching the endlessly repeated film clips of Terri Schiavo, seeming to respond to other people in the room with her, who is not moved. If one person can be prevented from dying, the obvious response would be to prevent her from dying.

Yet however we think and act in a media-saturated age, nearly every serious philosopher, none more so than the great Immanuel Kant, believed that we would be wrong to act out of emotional identification with a particular person. Especially when an issue is as heart-wrenching as the Schiavo family drama, it is important than we never lose our capacity to act reflectively rather than impulsively. And reflection demands that we consider each case on the basis of rules meant to apply to all cases.

Americans embody Kantian reasoning in the often-cited dictum that we are a government of laws, not of men. The Schiavo case reminds us why that dictum matters. In a case as conflict-ridden and morally wrenching as this one, the courts have reached a decision: Michael Schiavo's claim that Terri would not have wanted to live this way has been upheld. In relying on its own form of civil disobedience, the U.S. Congress is claiming that we are a government of men, not of laws. Even a moment of reflection suggests why this is a bad idea; governments of men give to whomever is in power the capacity to overrule rights and procedures to get what they want. Another term for that is "dictatorship." Upholding law might just be more important than preventing a death.

Emotion is a poor basis for making moral decisions for a second reason; it is cheap, while reason is dear. Nothing is easier to offer than sympathy at a distance. Those rushing to Terri's "side" have no conscience with which to struggle, no doubts to be resolved, no principles to violate. They need not even be consistent, which is why they can urge respect for Terri's life while ignoring all the deaths their cuts in Medicaid will cause. Emotional appeals surround us. No politician will earn a profile in courage by wallowing in them.

Reason, by contrast, ennobles and inspires, demanding, as it does, that we consider the interests of humanity as well as humans. Far from being easy, reason requires courage. Contrast the posturing of Republican legislators with the dignity of Florida Judge George Greer. In the past two weeks one judge has been shot in Atlanta and the family of another killed in Chicago. Judge Greer knows full well that in the Schiavo case, passions run high and people with links to violence, such as antiabortion activist Randall Terry, are involved. Greer could have taken the easy way out and protected himself and his family. He chose to uphold the majesty of the law. He should be a hero. Zealots could consider him a murderer.

Emotion, finally, fails as policy because hypocrisy is its first cousin. Intent on protecting Terri Schiavo's right to live, Republicans cannot be oblivious to the benefits yielded by her death. To this point, "liberals" and "activist judges" can only be blamed for trying to resolve the case. Imagine the conservative glee if it is resolved and the feeding tube is removed. Every court ruling will become grounds for appointing only the most conservative of judges. Every Democrat who speaks in the language of rights and reason will be treated as an accomplice to death. The quest for emotional satisfaction can never be fulfilled; Bill O'Reilly will always demand more. We cannot predict Terri Schiavo's fate, but we can surely anticipate outrage inflation, as every attempt to find moral guidelines in the murky world of death and dying becomes a political football.

This is why a sane society would try to put cases such as Terri Schiavo's outside the realm of politics. Let us by all means have a national debate over persistent vegetative states, living wills and conflicts between husbands and parents. But let us hold that debate over general principles. Our laws must be designed for unnamed individuals in the future, not on behalf of specific people in the here-and-now.

Choosing the universal over the particular, our framers banned "bills of attainder," laws that punish single individuals. The bill passed this weekend may not be a bill of attainder because it did not involve imposing a punishment. But we would nonetheless be wise to recall James Madison's warning, in Federalist No. 44, that "bills of attainder, ex post facto laws, and laws impairing the obligations of contracts, are contrary to the first principles of the social compact, and to every principle of sound legislation ... The sober people of America are weary of the fluctuating policy which has directed the public councils. They have seen with regret and indignation that sudden changes and legislative interferences, in cases affecting personal rights, become jobs in the hands of enterprising and influential speculators, and snares to the more-industrious and less-informed part of the community."

Tom DeLay is a speculator in the lives of others. A political system that responds to him has come a long way from the ideals of the men who founded it.