Is A&E's "Intervention" the most exploitative reality show ever, or a necessarily brutal snapshot of the perils of addiction? 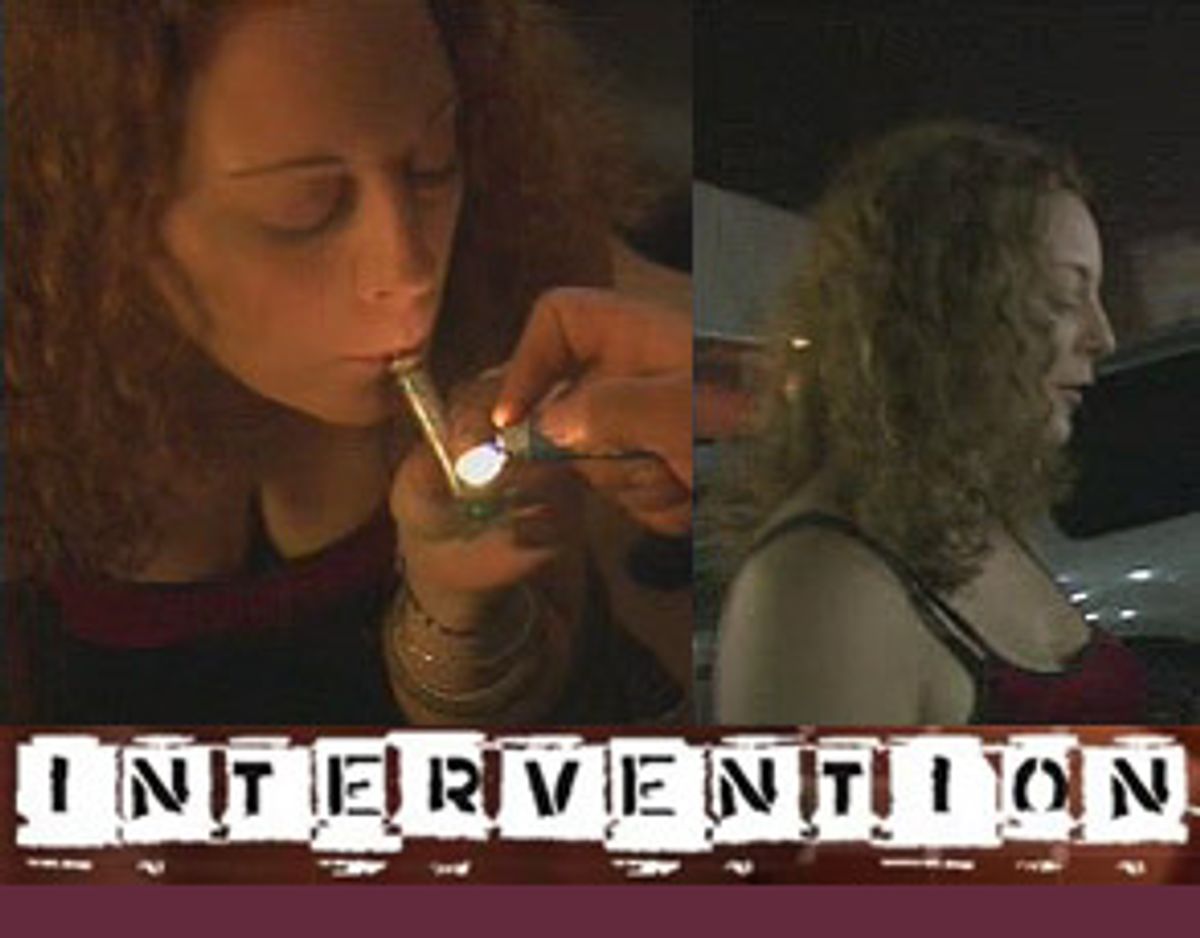 For those of us who haven't been brutalized by an addict or by addiction, there's something deliciously awful about watching addicts do their thing: rationalizing, bargaining, cajoling and wheedling their friends and family. The addict makes a mesmerizing subject for the camera's eye because the addict is the most self-centered person on earth, caring only for himself because it takes every ounce of his strength and energy to beat back those bad feelings, that groundswell of unacknowledged emotions that threatens to drown him. Although the addiction itself might look, from the outside, like thrill seeking -- ducking into the bathroom for a line of coke, riffling through racks of clothes with a wide, manic smile, rushing off to the casino to play blackjack -- in fact, what you're witnessing is a battered human being looking for a dark, dry place to rest. It's hard to remember, when you see such self-pity and manipulation and bile in motion, that what you're watching is a struggle for survival.

A&E's "Intervention" (Sundays at 10 p.m. EST), which features the lives of two different addicts each week and the interventions by their families led by professional counselors, has drawn scathing reviews and accusations of exploitation. "It makes prime-time sport of vulnerable, desperate people and their spiral to the bottom," wrote Matthew Gilbert of the Boston Globe. Dusty Saunders of the Rocky Mountain News says the show is "scream-and-shout television at its worst, a depressing hour trying to pass itself off as a show offering helpful therapy." Kevin Crust of the Los Angeles Times calls the show a "vile little exercise in debasement" and an "emotional snuff film."

What these critics don't say is that "Intervention" is extremely engrossing, emotionally wrenching and impossible not to take to heart. When Alyson proclaims her so-called friend "the coolest crackhead person to hang out with," it's not just hilarious and absurd and devastating at once, it's also recognizable. Pretty much anyone who's ever been drunk recognizes a piece of themselves in Alyson -- the misplaced affection and gratitude, the self-aggrandizement, the delusional notion that you could stay in that warm, painless bubble and just float above reality indefinitely. The lie of a good high is laid absolutely bare in that moment, and anyone who's been caught up in that lie once or twice or 50 times can't deny the ugly place to which it so often leads.

But what about the poor addicts who agree to appear on "Intervention," having been told it's a documentary on addiction, only to find themselves surrounded by their peers and family, all insisting that they go to rehab as the cameras roll? Certainly it sounds like a nightmare for those of us who can't begin to comprehend the shame such a moment would induce in us. But my admittedly limited sense of addiction and recovery is that those who walk through the fire are, generally speaking, anxious to share their experiences with others in order to keep those people from having to suffer the way they have.

Twelve-step programs are often focused on the lowest moments in an addict's experience, in fact, and those in recovery tend to recount these moments freely if they think it can help someone else. Look no further than the glut of addiction memoirs, from Caroline Knapp's "Drinking: A Love Story" to James Frey's grueling "A Million Little Pieces," for more evidence of this phenomenon. Of course, it seems inevitable that there'll be a participant on the show who OD's, and their death will cast the entire project in an awful light, used by naysayers as evidence that such shows are crass and filthy and victimize their participants. But that doesn't mean that, on the whole, "Intervention" doesn't serve some greater good.

Yes, it's easy enough to take the producers' supposed good intentions with a grain of salt, and sure, those of us who happen to get a kick out of "scream-and-shout television" are probably guilty of some serious rubbernecking. But plenty of shows make me feel dirty: Watching the squeamish babe feast on a roasted donkey penis on "Fear Factor"; seeing another bachelor agonize over which girl he barely knows should become his fiancée; witnessing those final moments on "The Swan," when the once chubby girl with low self-esteem gazes into her brand-new, generic, plasticized face and cries, "Oh my god! I'm so beautiful!" On "Intervention," the subjects are aware that they have a major problem, and agreeing to document it is, arguably, part of their cry for help.

"I'm suffering from severe depression, agoraphobia, severe panic disorder, bipolar, obsessive-compulsive disorder, and post-traumatic stress disorder," Vanessa, who played a nurse on the show "E.R." for three years, tells us. Vanessa blew her earnings on clothes and accessories and shoes that fill a large storage space, and now she has trouble leaving her apartment at all. "Some days I'm able to drive a couple of blocks and I feel OK and I'm able to go to the store and do my stuff. And then, for whatever reason, for the next six weeks, I won't be able to drive at all." Weak and self-pitying as Vanessa sometimes seems, mostly we feel extremely sad for her and find ourselves hoping that someone can shake some sense into her and help her overcome her afflictions.

Tamela, a cutter, or self-mutilator, is even harder to understand at first: She seems remarkably well-adjusted and happy when she's not crying and clutching a razor blade. "When the razor's going in, I'm just thinking about the blood and how good I'm gonna feel afterwards," she tells us. Later, she reveals to a friend that she was molested when she was younger. According to the show, more than 50 percent of self-mutilators are victims of sexual abuse. When Tamela goes home to stay with her parents, her father fidgets and stands several feet away from her, and her mother tells her that sin must be at the root of her problem, since sin is "the cause of all of our problems." Seeing Tamela in an environment that clearly erodes her sense of self is almost too much to bear.

Gabe, on the other hand, is a little less easy to love. "It is my personal feeling that when you decide to have kids, you're responsible for them for their entire lives," he tells us in the whiny voice of a 10-year-old. Gabe reportedly had a genius-level IQ when he was younger. Now he's addicted to gambling, and his debts have cost his parents their house. Every step of the way, Gabe blames others for his problems. When he can't pay his bills and his parents won't step in yet again (one gets the sense that they've stepped in way too many times already and have exacerbated his problem by not insisting on healthy adult boundaries), he whines to the cameras, "Now I'm going to have to gamble, because nobody's giving me the money that I need!"

When you see such rationalization in slow-motion, at close range, it's impossible not to feel that you're being enlightened. The mistakes the addicts make, the mistakes their codependent parents make, the mistakes their conflict-averse friends make, all add up to a big, ugly mess that's as instructive as it is fascinating. Many of us might not enjoy the mess (ahem, many of us do enjoy it), but there's a lot to learn there, mostly about ourselves and our own susceptibility to weakness, self-pity, blame, destructiveness and passivity.

After all, what bothers us the most about addicts is that they're doing what we're all tempted to do, either once in our lifetime, once every few years, once every few months, or once a week: Give up. We hate the addict because we want to tell him or her, "Suck it up! Do you think I like going to my tedious job every day? Do you think I enjoy reading credit card bills I can't begin to tackle? Sure, I'd love to stay in bed and eat chocolate and smoke crack for the rest of my life, but I don't do that, because I know better!"

But the addicts have something important to tell us, too. When they falter and flail and whine and manipulate and blame, they're showing us how a normal person can turn into a paralyzed, confused demon. And the message is this: You are not immune.

Whether "Intervention" was born of a pure heart or a crass desire to capitalize on the lowest moments of others hardly matters to me. What matters is that, in this time of excess and overindulgence and the deification of partying celebrities, this show has the potential to scare the hell out of millions of viewers. And that doesn't seem so bad, since as far as I can tell, our culture is crying out for an intervention.