A new book rescues one of the 20th century's greatest minds from the postmodern relativists who have claimed him -- and his pal Einstein -- as their own. 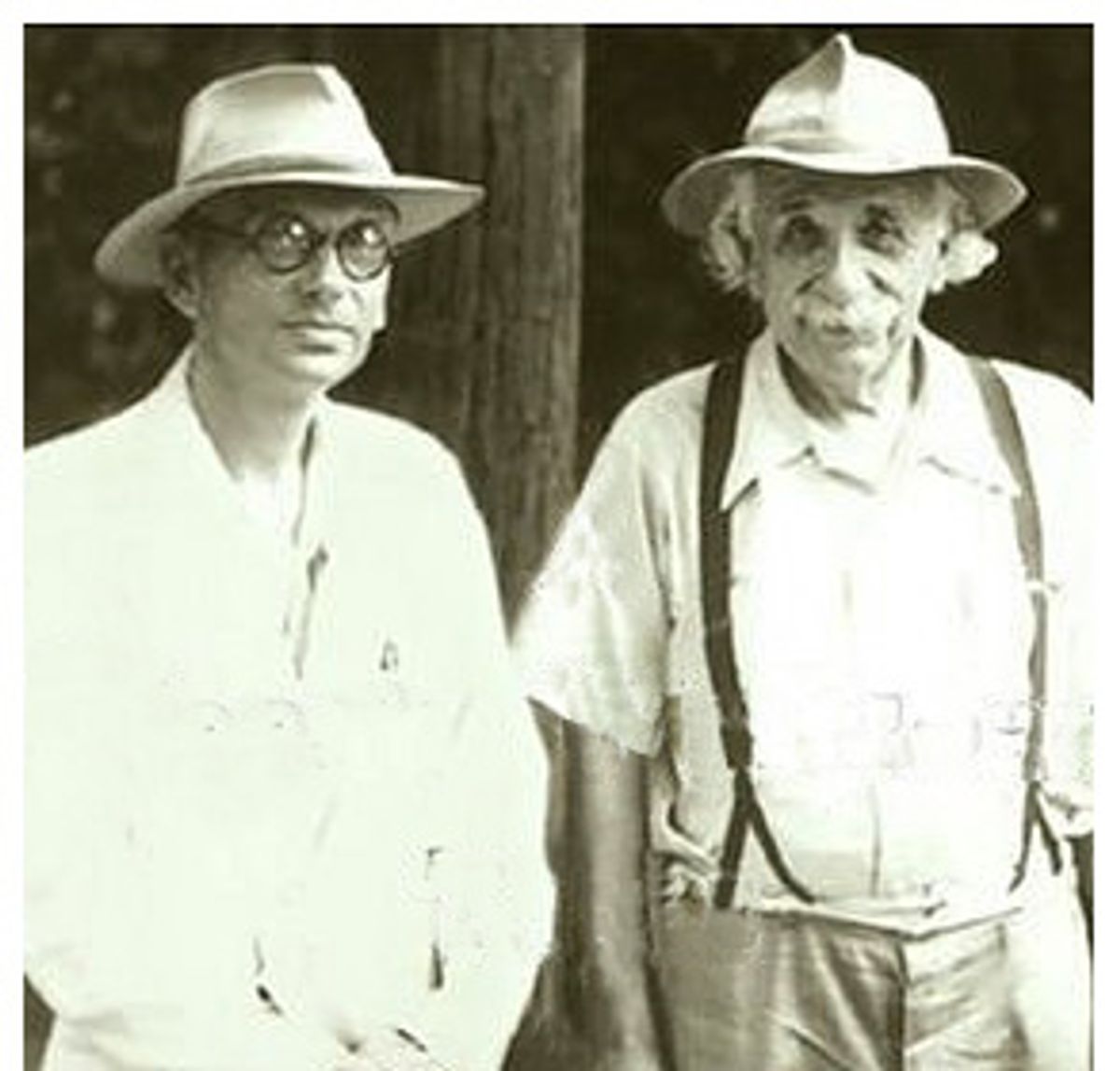 By now, most readers have learned that when a creative writer becomes enamored of quantum physics, the results are usually bad news for literature. This kind of intellectual infatuation often leads to gassy, shapeless explorations of the uncertainty and unknowability of pretty much everything. Mystery, in one form or another, is what art is about, but when an artist suddenly believes that mystery has been validated by science -- that hardheaded arbiter and high priest of the modern world -- he or she is likely to go nuts with the verbal fog machine. (And anyone who's read Jeanette Winterson's "Gut Symmetries" knows just how dire the consequences of that can be.)

It turns out that these intellectual romances can be disastrous for science, too, as Rebecca Goldstein shows in her masterful new book, "Incompleteness: The Proof and Paradox of Kurt Gvdel." The book is part of the Great Discoveries series, in which each volume is dedicated to a single important scientific breakthrough. The designated breakthrough in this volume is the revolutionary demonstration, by the Viennese logician Kurt Gvdel, that in any formal system complex enough to handle numbers, there inevitably exists at least one formula that is both true and unprovable, and that, by extension, no such formal system can prove itself to be consistent or complete.

A professor of philosophy as well as the author of five interesting, if highly cerebral novels, Goldstein makes the ideal guide to both Gvdel's theorem and the way it's been represented -- or, more often, grievously misrepresented -- in the humanities. She even met Gvdel once, at a garden party at Princeton, where she was a graduate student and young logician in the early 1970s, though she reports that she was, like the rest of the students present, "awed into stupidity" by the very presence of the great man. (Gvdel, in residence at Princeton's fabled Institute for Advanced Studies since World War II, died in 1978.)

Gvdel's theorem often gets grouped with two better-known and equally epochal discoveries in physics, Einstein's Theory of Relativity and Heisenberg's Uncertainty Principle. Some thinkers see all three as, in Goldstein's words, "high-grade grist for the postmodern mill, pulverizing the old absolutist ways of thinking about truth and certainty, objectivity and rationality." For those who wish to argue that "the very notion of the objectively true is a socially constructed myth," these three towering minds make for impressive allies.

That's all well and good for Werner Heisenberg who, Goldstein says, found such notions congenial. But Einstein and Gvdel neither intended nor saw their work as undermining the idea of objective truth; in fact, quite the opposite. Goldstein's "Incompleteness" is both an eminently lucid explanation of Gvdel's theorem and its implications, and a full-blooded defense of it from those who would claim it for the cause of pomo relativism.

Gvdel used arithmetic in proving his theorem, but since Goldstein is most interested in the philosophical implications of his work, "Incompleteness" doesn't use many numbers or equations. It's a challenging book, nevertheless, because of its focus on abstract concepts, but it doesn't require specialized knowledge and it's never gratuitously murky. (There are only about three pages, concerning a technique Gvdel developed for turning the very syntax of mathematics into numbers -- the "Gvdel numbering" -- that remain stubbornly opaque to this nonmathematician.) It's more concise and less cosmic than another popular exploration of some of the same ideas, Douglas Hofstadter's "Gvdel, Escher, Bach."

According to Goldstein, Gvdel and his close friend Einstein stood in opposition to a philosophical movement that came to dominate 20th century thought, positivism. The epicenter of positivism was Vienna, Austria, between the two world wars and specifically within an elite group known as the Vienna Circle. The demigod of the positivists was the philosopher Ludwig Wittgenstein; Wittgenstein himself insisted that he was not a positivist at all and became so disgusted with the group's misunderstanding of his ideas that during some of their meetings he'd sit facing the wall and recite verse by a mystically inclined Indian poet. (The choice was deliberately provocative, since the Vienna Circle disdained anything smacking of metaphysics.) Gvdel also attended the Circle's meetings, though he kept his objections to himself.

Very roughly, the positivists declared that only statements that can in principle be factually verified by the evidence provided by our senses have any real meaning. Other statements, dealing with abstractions or the definitions of words (i.e., "All bilingual people speak two languages") they dubbed "trivial" or "meaningless" because their meanings exist only within the system of language. (Wittgenstein call such statements "language games.")

Goldstein uses the very helpful metaphor of chess to illuminate this distinction. The game of chess has a complex and unified set of rules, but it isn't about anything but itself. As magnificently as they function, the rules of chess are a set of entirely man-made ideas and don't describe anything in the real, material world. Likewise, according to the positivists (and, in this instance, Wittgenstein), much of what philosophy had traditionally concerned itself with -- abstract questions about the nature of being, reality and God -- were "meaningless" outside the closed, man-made system of language (including the language of mathematics).

Gvdel, on the other hand, was a Platonist. Like the ancient Greek philosopher, he believed that there exists, in objective reality external to the human mind, an ideal realm. Plato called the objects in this realm "the forms," and described the physical world as we experience it as consisting of mere shadows of the forms of this ideal realm. Where the positivists would argue that mathematics is merely a system of symbols created entirely by human beings, Gvdel considered it an apprehension or understanding of some transcendent objective (if not necessarily material) reality. For the positivists, the number "2" was an idea and a symbol; for Gvdel it was an actual, and very beautiful, thing.

Positivism started as a kind of intellectual housecleaning following World War I. In Vienna, Goldstein writes, "the overall topic was the moral and intellectual death and decay of all that had come before, and the need to construct entirely new methodologies, forms and foundations." The Vienna Circle celebrated empirical science as the basis for those new foundations, but as the ideas of positivism evolved and filtered into such disciplines as literary theory, anthropology and linguistics, science itself became a target of skepticism. Enter, postmodernism. Every form of knowledge came to be analyzed as a set of rules created by flawed human beings whose biases inevitably infected those rules. The relativity, uncertainty and incompleteness of Einstein, Heisenberg and Gvdel became metaphors for the unreliability of what we once took to be truth.

Einstein, whose famous theory is so often misrepresented in the maxim "Everything is relative," might not have been so ardent a Platonist as Gvdel, but he was no subjectivist. According to Goldstein, "Einstein interpreted his theory as representing the objective nature of space-time, so very different from our human, subjective point of view of space and time." Both men believed that an objective, abstract reality existed and that the human mind could behold and grasp this reality. As Gvdel saw it, we achieve this through a faculty called mathematical intuition.

Gvdel's faith in mathematical intuition put him in opposition to the mathematical equivalent of positivism, a movement called formalism. Formalism, led by the mathematician David Hilbert, believed that mathematics was, in Hilbert's words, "a game played according to certain simple rules with meaningless marks on paper." Or, as Goldstein describes it, "mathematicians, according to formalism, are not in the business of discovering descriptive truths, whether of the real world of things in physical space or the trans-empirical world of numbers and sets ... They are simply in the business of manipulating the mechanical rules of self-enclosed formal systems."

If formalism were correct, then it followed that mathematics could also be overhauled so that every part of it was "consistent" and the entire system was "complete." It could be boiled down to a set of rules or axioms and procedures so basic and ironclad that a machine -- the computers that were just beyond the historical horizon -- could perform it. It could be finally purged of the paradoxes that had been plaguing the field for hundreds of years. Mathematical intuition, the source of ideas that can't be formally proven but possessing what Goldstein calls, "the urgent cogency that compels belief," has no place in such a system.

Gvdel's theorem used the rules of formalism itself to demonstrate that the formalist project could never be achieved. In what Goldstein calls "one of the most astounding pieces of mathematical reasoning ever produced," he demonstrated that in the kind of system that the formalists aspired to, it was possible to make a statement that was both unprovable and yet also true. This works a little like the famous "liar's paradox," in which the statement "This statement is false," can only be true if it is also false and vice versa. But Gvdel's theorem was not a paradox, precisely because it pointed to the difference between what could be proven and what was true.

It's easy to see why the distinction confuses people. While Gvdel might seem to be challenging reason itself, he was, to put a finer point on it, actually demonstrating the inherent problem in a particularly limited form of reasoning. He never abandoned his own faith in another, broader form of reason that includes intuition. Goldstein writes that Gvdel's adherence to his unfashionable Platonic beliefs made him a kind of intellectual exile, and that this, as well as genius, sealed the bond he shared with the equally alienated Einstein.

The two men famously walked together through the streets of Princeton to the Institute for Advanced Studies every day, and Einstein once said that he kept his position there only for the opportunity it gave him to walk with Gvdel. One of the many topics they discussed was the theory of relativity, and on Einstein's 70th birthday, Gvdel presented the older man with a paper that used Einstein's field observations to argue that time itself does not exist. (Given a sufficiently fast rocket ship traveling in a sufficiently wide curve, it's possible, Gvdel claimed, to make a round trip that would carry you into the past.) There is some difference of opinion on whether Einstein accepted this interpretation, but the philosophy professor Palle Yourgrau says he did and champions Gvdel's theory in the somewhat more technical new book "A World Without Time: The Forgotten Legacy of Gvdel and Einstein."

After Einstein's death in 1955, Gvdel became increasingly tormented by fears of persecution, some of which were projected onto the great 17th century German mathematician Gottfried Wilhelm Leibniz. Leibniz's work, Gvdel insisted, had been villainously suppressed in order to "make men stupid." He ate less and less, ostensibly for fear of being poisoned, until finally he died of malnutrition, weighing a mere 65 pounds.

Goldstein calls Gvdel's mental illness "that rationality run amuck which is paranoia." If Gvdel's gifts finally turned on him, it could hardly have been more cruel than the realization that his work and that of his closest friend had been so commonly misunderstood. Goldstein begins her book with several quotations from books on philosophy and history -- one published during Gvdel's lifetime and assigned to her in college -- that characterize Gvdel's work as undermining the very possibility of discovering truth. Einstein is depicted in Michael Frayn's 1998 play "Copenhagen" as proving that "the universe exists only as a series of approximations. Only within the limits determined by our relationship with it. Only through the understanding lodged within the human head." Given what Einstein and Gvdel really did believe, you can hardly blame Gvdel for suspecting a conspiracy to make men stupid.