As crucial elections approach, the Lebanese opposition is divided about its next move. Are these differences merely tactical -- or could they plunge Lebanon back into chaos? 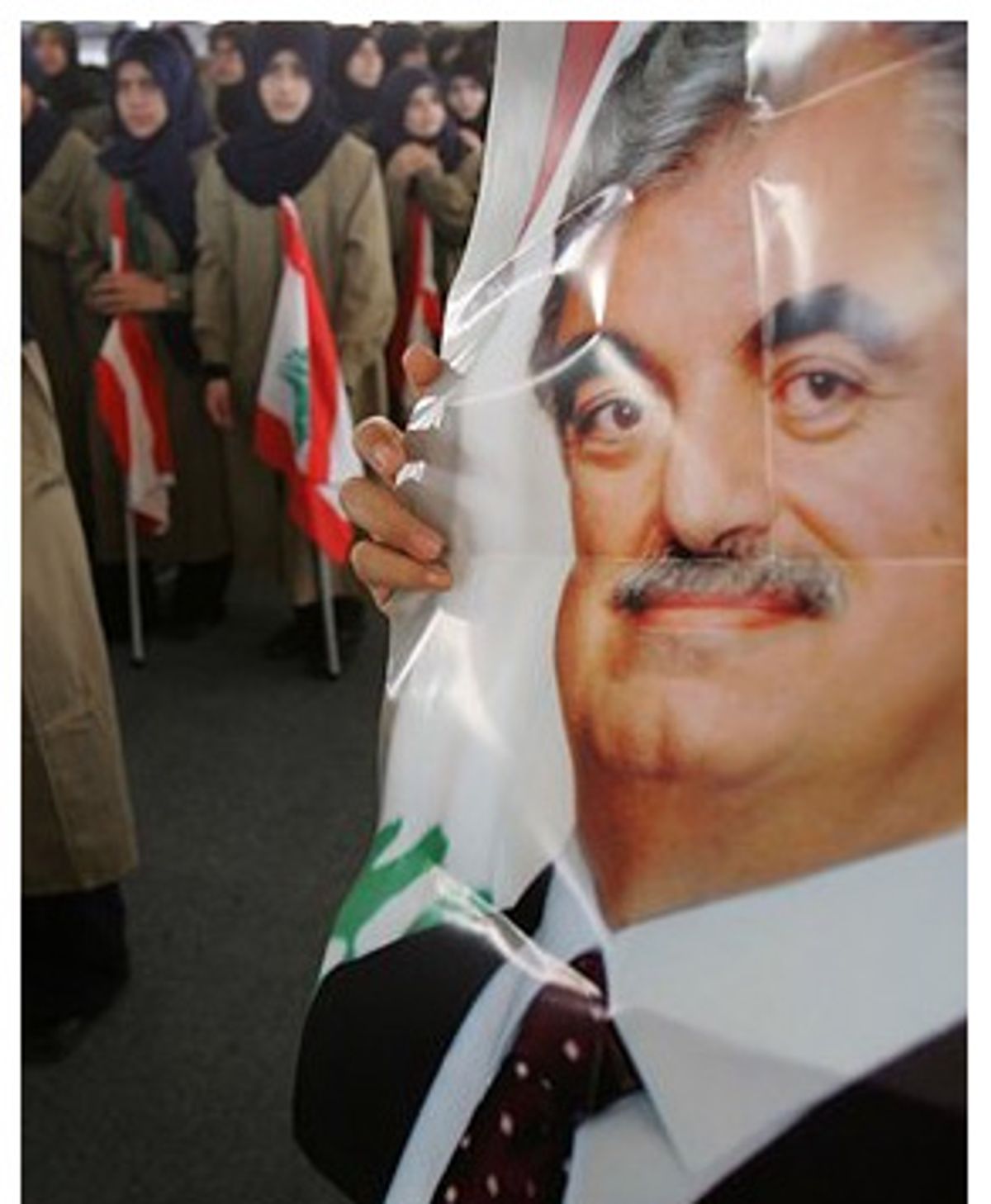 The epicenter of Lebanon's "Cedar Revolution" is in the parking lot of the Virgin Megastore. This is where Rafik Hariri, the billionaire former prime minister whose assassination inspired the anti-Syrian movement, is buried, and where opposition supporters in a tent city have been holding a vigil, demanding the resignation of the Lebanese security services and the truth about who killed Hariri.

The mostly young people smoking cigarettes and playing guitars in the tents clearly come from privileged backgrounds; they speak French and English to each other as much as they do Arabic. In his speech reacting to the protests, Syrian President Bashar Assad dismissed the movement as inconsequential, saying that if the television cameras would only "zoom out" there would be no problem. But the mass opposition demonstration last Monday -- as many as 1 million people may have turned out -- proved he was wrong.

Less than 50 meters away from the tents, in the shadow of Lebanon's largest mosque (financed by Hariri himself), a constant stream of mourners visit the gravesite. They come from all over Lebanon, young and old, rich and poor, Christian, Druze and Muslim. Clearly, this is no "Gucci revolution" of only Beirut's well-to-do.

But though the opposition represents a large swath of Lebanese society, it remains fractious, torn over its next move. Its different factions -- made up of Maronite Christians, Druze and the parliamentary bloc of Hariri's family and allies -- disagree on whether to take part in an interim national unity government, on whether pro-Syrian President Emile Lahoud should resign, and whether Hezbollah, the armed Shiite militia, should disarm. So far, Lebanon's independence movement has been largely free of violence, with all sides calling for restraint. But tensions are rising -- a car bombing this weekend in a Christian neighborhood wounded nine people, and fliers have appeared depicting opposition leaders as "Jewish spies." With Lebanon's Syria-oriented security forces soon to be unemployed, fears are increasing that these differences could explode into open conflict.

[On Wednesday morning, another bomb exploded in a shopping mall in a mostly Christian area north of Lebanon, killing three people and increasing fears that provocateurs were trying to destabilize the country. A major Maronite Christian opposition group, Qornet Shehran, accused the government of trying to terrorize the opposition.]

Hariri's murder unified the previously divided opposition of Christians, Sunni Muslims and Druze, leading to mass calls for Syria to withdraw its troops and, perhaps more important, dismantle its pervasive intelligence and security network. When mass protests toppled the government of Prime Minister Omar Karami, and even Arab states like Egypt and Saudi Arabia called for Syria to withdraw, opposition leaders hoped that the entire Syrian apparatus would be quickly swept away.

But President Emile Lahoud reappointed Karami 10 days later. And since then Lahoud and Karami (both widely perceived as Syrian puppets) have insisted that in order to hold parliamentary elections, an interim "national unity" government including both the pro-Syria faction and the opposition must be formed. The elections are crucial because Parliament elects the president, the powerful security services and the cabinet ministers, and it could replace Lahoud if he remains. The current Parliament is pro-Karami.

Many in the opposition oppose participation in the national unity government. They see Karami's call for an interim government as a stalling tactic, designed to split the opposition and delay the parliamentary elections until conditions are more favorable to the ruling party and Syria. Walid Jumblatt, a leader of the Druze, and the Hariri bloc in Parliament have rejected joining the interim government.

The problem, however, is that the opposition has to take part in the interim government or it will not be able to help write a new election law. Lebanon's complicated election law, which is intended to allocate a certain percentage of seats for each of Lebanon's 18 recognized religious and ethnic groups, is changed by each new Parliament. And many in the opposition fear that the pro-Syrian government will write the election law to "game" the election in their favor -- which is why they are urging Jumblatt and the Hariri bloc to join the government.

Habib Malik, a professor at Lebanese American University and a major supporter of the opposition, says if the opposition doesn't participate in writing an election law, that would "leave a lot of room open for hanky-panky by the current government in writing the law, which could make it easier for them to protect their dominance. This is one reason I for one want the international community to monitor not just the election but the writing of the law."

Sitting in his family castle last week, a 400-year-old example of Lebanese architecture that commands a stunning view of the Chouf Mountains, Jumblatt dismissed the idea of joining a national unity government. "Why should we join with a government that is covering up the murder like they have?" he scoffed. "What about the murder of Hariri? We want the resignation of everyone. In any country they would have already resigned for failing to do their jobs."

Jumblatt, a member of Parliament, had originally joined much of the opposition in demanding that Lahoud step down, but he has recently moderated that stance. "Later, after we win the elections, there will be a new government. I will then advise President Lahoud to step down, and then there will be a new regime, a new president and a new government," he told supporters Sunday.

Members of the Christian faction echo Jumblatt's views of Lahoud, Karami and the interim government. "We have concerns about the behavior of the pro-Syrian authorities," says Beirut M.P. Ghinwa Jalloul, sitting in her stylish apartment. Smoking a Marlboro Light, she is fresh from an appearance on Future TV, a station founded by Hariri, who also served as her political mentor and patron. "There is an intent to delay or postpone the election to extend the election of the Parliament another year. We cannot but insist on our main demands by not remaining a part of any government formed now, especially one by Karami."

Jalloul opposes Lahoud's resignation, saying she fears that the pro-Syrian Parliament might appoint another Syrian puppet. "People are calling for Lahoud to quit, but we are not going to," she says. "We don't have a majority in Parliament yet and cannot control the new president. We don't want to be stuck with a new anti-Lebanese president for another six years."

Fares Soueid, a Maronite Christian M.P. from Jbeil just outside Beirut, takes an even harder line. "There can be no talks with this current government, which we think represents Syria and is responsible for the death of Hariri. You cannot say you were a friend of Hariri and talk to this government. Any talks would mean we lose our Sunni partners." (The Hariri bloc is Sunni.)

"We want the truth," he adds, echoing a slogan of the opposition. "And we want the Hariri family and supporters as our partners."

When asked about the possibility that not negotiating with the government could risk a delay or the postponement of the election, Soueid says, "We will then continue our intifada" -- using the Arabic word for uprising, usually applied to the Palestinian struggle against Israeli occupation.

In Soueid's most audacious move, he openly blames not just the Syrians, but also Hezbollah, for killing Hariri. Such an accusation is highly unusual, even from those who oppose the militant group.

Soueid says the Shiite community has been mentally "kidnapped" by the popular group and needs to break free. "The Lebanese opposition is ready to give assistance to the Shiite community. We know very well that if they are not represented, this will be a big problem," he says. "But this special position of Hezbollah after the withdrawal of the Israelis has to stop. They invented the dispute over the Shebaa Farms [a small strip of land claimed by both Lebanon and Israel, which Hezbollah has used as a justification for continuing the armed struggle against Israel], but the resistance in Shebaa benefits Syria and not Lebanon."

Syria has used the Shebaa Farms situation, and Hezbollah, as bargaining chips and proxies in its own bitter dispute with Israel over the occupied Golan Heights, which Syria lost to Israel during the 1967 war.

Over the past 20 years Hezbollah, or "Party of God," has made a remarkable transformation from a militant Shiite group fighting the Israeli occupation with support from Syria and Iran, to a legitimate political party and social-services provider to the desperately poor rural Shiite. Its near-mythical status as the only Arab army to defeat the Israelis secured it popularity, and its reputation for integrity has given it political legitimacy in Lebanon. The United States takes a darker view of Hezbollah: Citing its alleged role in terror attacks against U.S. targets during the 1980s, it classifies it as a terrorist group. Since Hezbollah mobilized at least 500,000 people in a mass pro-Syria demonstration two weeks ago, however, the United States has realized it must deal with Hezbollah in order for any political settlement to work.

In Lebanon, Hezbollah serves as a kind of symbolic stand-in for the fraught issues of Israel, and Lebanese and pan-Arab resistance to it. Hezbollah's general secretary, Sayeed Hassan Nasrallah, has used his group's prestige, and the potent charge that the opposition is doing the bidding of Israel and the United States, to blunt calls that it be disarmed.

That call is contained in United Nations Security Council resolution 1559, which demands not only a Syrian pullout but the disarming of Hezbollah. Nasrallah has denounced 1559 as a foreign plot to weaken Lebanon and Hezbollah in the struggle against Israel.

Soueid argues that "Israel is not afraid of the Syrian army, and it knows that its presence in Lebanon was never aggressive toward them." The real issue, however, is not the Syrian army but Hezbollah. Israel has long supported the Syrian presence in Lebanon, but only because that provided an answerable "address" in the event of Hezbollah attacks against it. It is no secret that both the United States and Israel would love to see Hezbollah disappear off the face of the earth -- and it is that wish that Nasrallah has exploited expertly. (Israel actually helped Hezbollah's cause by openly calling for it to be disarmed, a move that backfired so badly among Lebanese that the United States had to tell its ally to keep quiet.)

As tension between the opposition and loyalist factions, including Hezbollah, has risen, some ominous rhetoric has begun to appear. Both Soueid and Jalloul have been the subject of anonymous fliers calling them Zionist agents. Even Jumblatt -- who opposes calls to disarm Hezbollah, earlier bemoaned the failure of Iraqi insurgents to kill American Under-Secretary of Defense Paul Wolfowitz, and has a long history of fighting both the Israelis and his current Maronite Christian allies -- was portrayed as a rabbi in signs held during a Hezbollah rally.

Opposition leaders say they expect more violence and political assassinations as the Syrians withdraw and the Lebanese security services become more worried about being hung out to dry by their political partners. Besides, Syria has a motivation to see violence break out: After all, it was Lebanese violence -- spurred by outside powers Iran, Israel and others -- that shattered the country and required their presence in the first place.

It is difficult to say whether the splits in the opposition merely reflect disagreements over tactics, or fundamental differences that will endure even if Syria leaves the scene. But upon the answer may hang the future of Lebanon.