Cary Tennis visits the city of light -- and finds that art can make people come to blows. 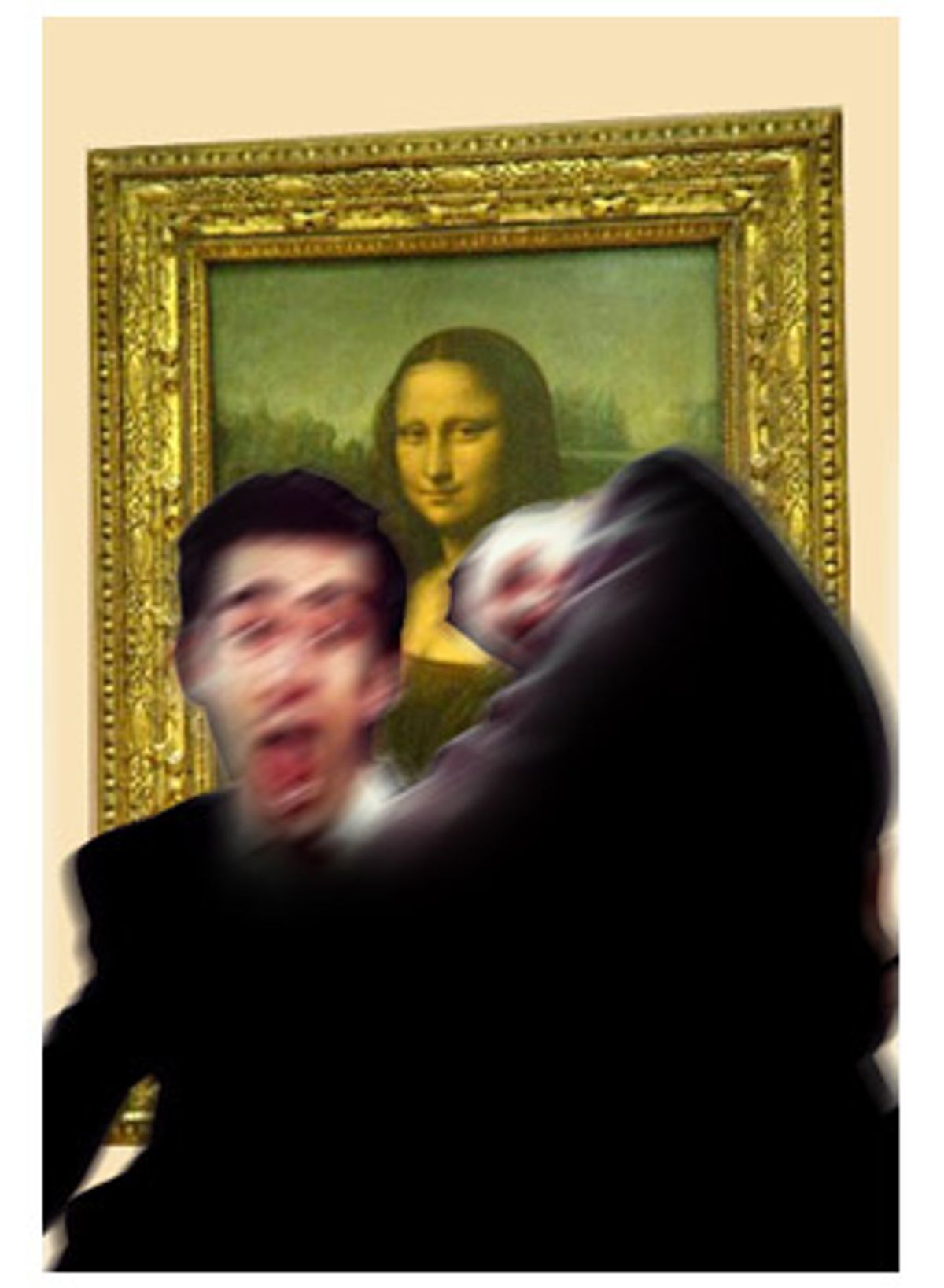 A fight broke out at the "Mona Lisa."

The crowd surging forward anxiously toward the small frame at the end of the room could have been any crowd around any spectacle -- an auto accident, a game of three-card monte -- except for the unusual gestures of obeisance they were making. Knotted thickly, numbering maybe 50 at a time as more joined and more left continually, they were holding their digital cameras aloft, rather like reporters in a hasty press conference (except with an intensity in their faces bordering on devotion), recording their encounter with the "Mona Lisa." There was something startling about their behavior and it was necessary to stop and observe for a while, to pick up the repetitive pattern, as if it were some inscrutable behavior of fish or birds, minnows perhaps clustered quick and ravenous about a bit of balled-up bread, nibbling it into oblivion as it slowly sinks in lake water -- except the bread, being real bread, is exhausted as it is eaten. The "Mona Lisa," on the other hand, being inexhaustible light, a kind of magical host, does not disappear no matter how much of it is eaten, flash by flash, shutter by shutter.

It is mysterious to my wife and me why thousands would file through the world's greatest collection of art, pointing their cameras at piece after piece and moving on, like tourists picking wildflowers to enjoy later in private. But we accept it to some degree, knowing as we do that different people have different ways of responding to art, and different reasons for seeking it out. Naturally those of us with keen practical or professional interest pay rather more detailed attention to individual works, and try to think about the art in ways we imagine are more in keeping with its maker's intention, and so we look down on those whose relationship with a piece of art seems to grow out of mass hysteria, religious fervor or sheer conformism. But we want to understand it.

The passionate movement of crowds always contains a threat of violence, the danger of being trampled in a stampede or being eaten alive by a mob suddenly incited by a slight or a shove or an accidental insult against their god. With all those people from all those different lands holding all those cameras above their heads in the Louvre, that's a lot of elbows in the air. Someone's elbow knocked someone's glasses off, or someone stepped on someone's toe, or did not say Excuse me, or said it in the wrong language, or someone cursed someone and some shoving ensued. You know how that sort of thing can happen. So as I stood back, in awe as much at the crowd as at the painting, the fight broke out.

It was easy to see who were the combatants: two men in their 50s or 60s, one tall, Nordic and blond, the other darker, smaller, French or Italian perhaps, wearing glasses and a camel hair or tweed jacket. The smaller one tried to shrug off the shove and walk away but the blond one got a punch in -- overhand, from behind, landing a glancing blow on the cheek and neck. A tall black security woman intervened. The crowd continued raising their cameras above their heads, trying to take in whatever it was about the "Mona Lisa" that captivated them so.

Now, in trying to understand people and why they do things and what those things mean, I sometimes have to simply watch until a pattern emerges: What does this look like? What is it a pantomime of? It is necessary to put aside the obvious -- that they are taking pictures -- and ask instead what is the form of the gesture. What is the meaning of that frozen stance, camera held high above the head, that gesture in the face of the object? It looks like a kind of genuflection, a ritual stopping of the body and an opening of the eye, window of the soul, so that something divine may enter. In the flash is the instantaneous opening of an aperture into which the light pours.

As I write this I am sitting in the top floor of the Shakespeare Book Company, a window of which looks into the airshaft shared by the Hotel Esmeralda where I am staying (the window of our room, in turn, looks onto Notre Dame). Like all those tourists flocking around the "Mona Lisa," I too have made a sort of pilgrimage to something whose true significance I do not consciously understand. Instead of taking pictures I am jotting in a notebook.

Not being a religious man, I can't say if the rituals of the church are as opaque to those who practice them as the payoff of the camera ritual is to those pilgrims who flocked around the "Mona Lisa," raising their cameras high above their heads. But I must believe that in the patterns we make in doing our rituals there is, if not meaning, at least a kind of beauty -- the beauty of a flock of terns lifting suddenly in perfect accord. That is, in these things we do without knowing why is to be found, in some measure, who we are. I do not scorn the desire to have a touchstone, to get close to an object of importance or divinity or great worldwide significance. Indeed, as in many pursuits in life, when we think we are making something or getting something, often all we are doing is arranging ourselves in various attitudes of obeisance to various ideas of perfection.

And then always, inevitably, a fight breaks out.